A Fall at a Low Hurdle

2nd XI vs Paddy Foley’s: A Fall at a Low Hurdle

The 2s suffered their first defeat of 2018 at the hands of nemesis, Paddy Foley’s. Bitter as loses always are, this one hurt more after getting ourselves into a good position against an edited opposition. A good effort in the field could not be backed up as a team with the bat.

The Golden Week exodus from Tokyo slowed both teams down somewhat, with the last of the P. Foley’s rolling in well past the scheduled start time. We had generously allowed them to start with six players (seven being required) but unfortunately we lost the toss and thus also the chance to un-generously send them into the field!

Neel and Max opened fire with immediate results. Neel continued with his fine start to the season, showing zero signs of captaincy pressure, by removing middle stump in a wicket maiden. Max ‘Maxi’ Clements climbed into a good pace and line straight away (though still bedeviled by occasional straying). He opened up his Sharks wicket account with a cracker in his second over, clipping the top of middle, the slips dodging singing bails. With PF at 2-15 (effectively 4 with two players missing) we had a rig 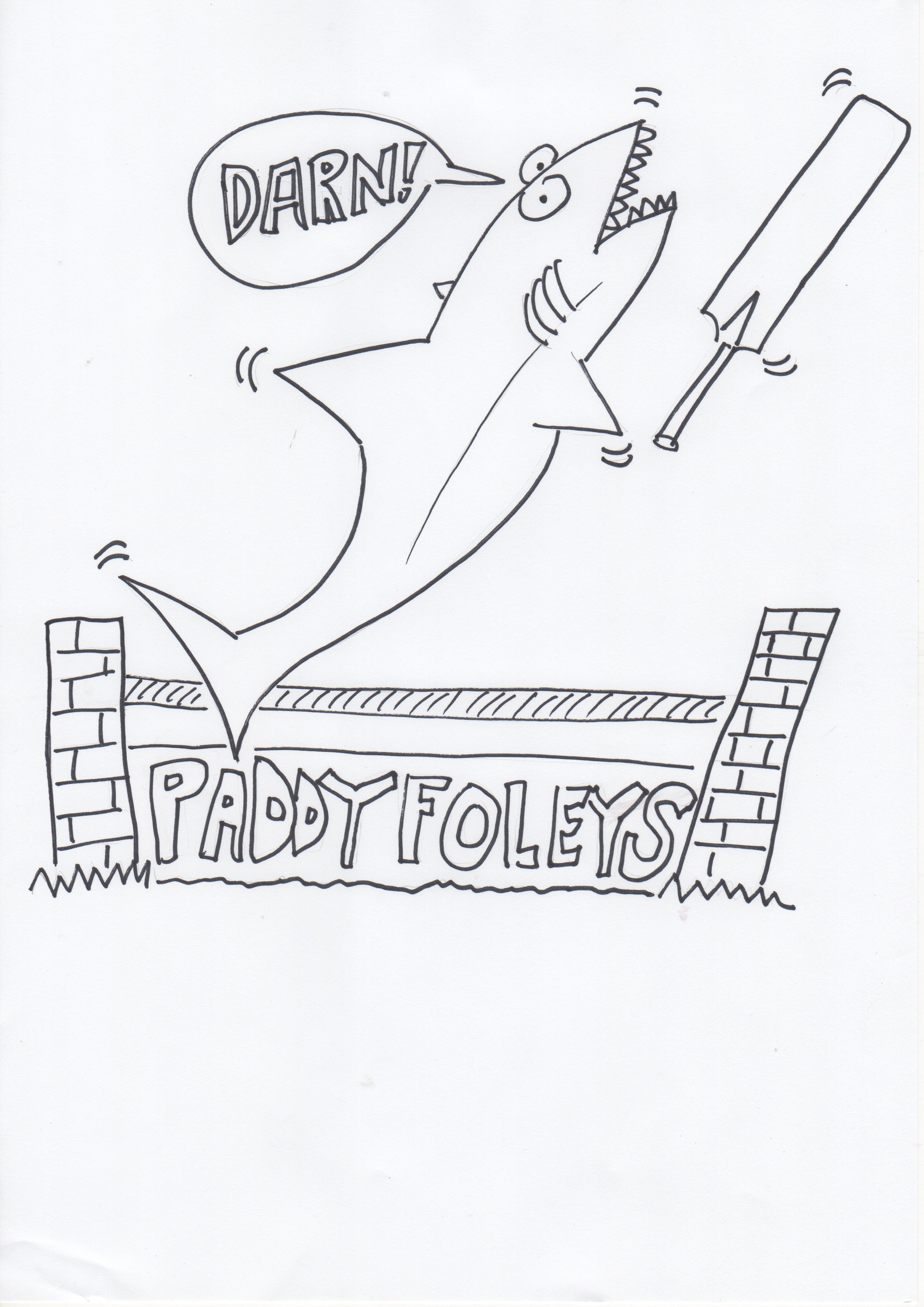 ht to be buoyant. Both Neel and Max repeatedly beat the bat, but the experienced right-left pair of A. Kumar and Usman weathered the storm, slices and swats started to find ropes and before we knew it it was 2-43 off 6 overs.

Next up, the first of our spin battery, Kavin and Chris Molloy, measured out their paths to what we hoped was PF destruction. Both were right on the money against the right-left PF combo. Kav was getting great bounce and flight into a wind and Molloy had the leftie tied in knots. The scoring slowed, the ooohs and aaahs grew frequent and louder, but we just could not crack this pair. After a spell together of eights overs PF had, at times literally, edged their way to a worrying 2-87 just before drinks. KB sent down one over to take us to that break. Paddy Foley’s settled at 2-88 and with us needing a breakthrough more than a drink.

On return, Maxi came back for one before KB and Molloy teamed up to put the brakes on and get us right back into the game. Over the course of nine overs they picked up 3-16. Terry held a looper at leg-slip to break the partnership and give Molloy his first. KB dropped straight into a difficult line, with batsmen content to pat the ball down. Molloy then struck with the prize wicket of Kumar when Anton, back-pedalling at slip, held a tough top-edged catch. KB joined the party, getting one past the deadbat for an LBW. 5(7)-117 after 25 overs and we were very much back in it!!

Neel and Kavin resumed and while they gave up little, no wickets fell. 5(7)-135-31. KB returned with another wicket maiden, stumped CT, and Maxi came back better in a burst. CT revised his stump work to give Kav his first and very well-deserved wicket, but the lower PF tail had wagged to give them 148-7(9) after 36.

With a keen sense of theatre, Neel unleashed our flight magicians, Koji and Anton (first trundle of the season). Koji could not revise his tricks but we were riveted by the genuinely even contest of Anton vs Faisel. It was slowest ball speed in Japan vs slowest bat speed. The PF No. 9 clearly enjoys a table spread, or the entire table, and Anton’s devious pies must have looked delicious. In somewhat of an anti-climax, try as the batsman might, the said pies cooled, untouched, untasted, on the windowsill in the rather wide corridor of uncertainty. Captain Neel bookended the innings with identical balls, bowling the big-hitting Umar to make it show over.

All the bowlers bowled well to excellently. Extras hurt us again, however. The fielding was good, with Terry, Shiham and Mairaj in particular stopping runs through their respective positions. To hold PF, even with 9, to 161 at Sano 1 was good effort and we knew if we batted as we could and should we would take this one home with us.

Kav opened up with Shiham. With Kumar (who caused us so much angst with bat) and Singh getting good length and movement, it was tough going. So much as that Kav lost his stumps, but with some liberal wides we were 1-20. Neel joined Shiham, who scored in edge boundaries, but the latter was on his way next over.

Maxi joined Neel and the youngsters gave us bright but brief hope. They both worked the ball into the many gaps, ran well and looked very straight and compact defending. If they could stick we were on our way. Maxi uncurled two glorious drives for 4, but getting out, fixed up, around the legs seemed to have become a fad. Both fell either side of the 50 mark and so did the middle order, (bar Terry, elevated to six and later near sainthood).

Mairaj and Chris Molloy could not keep shots down as we lost 4-5 on our way up to drinks. 6-54, with Terry and CT, distaining a tipple to plot recovery in the middle.

Two innings of contrast but with a singular purpose. One a bloody-minded innings of ‘thou shall not pass’; the other a bludgeon-minded ‘thou shall go find that’ (and once they didn’t). Terry just dropped anchor. Short bat lift and good eye, he annoyed the hell of out PF for ages and wrung cheers out of the batting shed. CT did likewise, but interspersed dead-bat with biff-boom. His 22 consisted of a 4 and three 6s – that’s it, and we wished it had gone on. One snuck under and then Anton had many,many overs to again show his mettle.

The vets continued to show what needed to be done. Terry was half way through his 53-ball/17-over stay, and the anchor was not getting easier for PF to move. Anton took his time but then found his range, peppering three boundaries through midwicket. They got us up and through the hundred. But, with two Englishmen out there fighting what seemed a hopeless battle for a team all at sea, on 111 what else but the dreaded ‘Nelson’ struck, and struck in front. Terry the fifth victim of the in-swinging Kumar.

Koji joined Anton with much work to be done. Anton played another solid hand but succumbed to a indiscreet shot, not the first by a Shark for the day. KB joined Koji. The latter valiantly snagged a few runs and kept the ball out. The latter did none of that and was just out. And with that, Sharks all out-120. Short by 41 runs.

Frustrating. Failing to chase 161 on Sano 1 against nine players is not something to write home about, let alone write a report about. It was largely a one-man show for PF, with Kumar getting the majority of both runs and wickets. (Hats off to him and may he potentially enjoy a return to PF 1sts.) We bowled really well, everyone, as can be seen by the spread of wickets. And we can get better. We fielded well and with some luck may have knocked them over for less. Mairaj just could hold what would have been a screamer of a catch. But with the bat we just did not put together partnerships and gave away our wickets with un-necessary or over-ambitious shots. We have potential with some young all-round talent, and the gnarly old guys in CT, Anton and especially Terry can hold their heads up. If we put it all together (and with our bowling attack) we will give any team a run, but we need to bat our 40 overs.

Big thank you to the umpires, Pandhari and Govindarajan from Men In Blue, for an excellently run and adjudicated game.