Dr. Wheatgrass Highlight of the Day
A stunning catch diving forward by the ever-dependable Terry at wide-ish slip capped off an assured display of fielding by the Sharks!

The gloomy clouds of the previous day gave way to bright sunshine just as the day broke on the morning of Sunday, 2nd July, 2017 and so brightened our moods as we set out to Sano to play against the home side in the seventh round of JCL2 matches. However, as they say, too much of anything is bad, and things started to turn a little sour in our minds once again as our eyes set their sight on the digital thermometer outside Tatebayashi Station, which read 31 degrees Celsius at just 9:30 AM.

Nevertheless, the twelve selected players remained focused on the job at hand, which was to overturn our fortunes and get back to winning ways against a Sano 2s side boasting a healthy blend of youth and experience. After just a short session of catching, the Sharks took to their water bottles to gain some hydration to overcome the mercury and humidity and waited for the news from the middle, where skipper Chris Thurgate was self-admittedly left speechless and star-struck as the coin landed in his favour for the first time in eons.

And so, looking at the weather conditions, he chose to bat, presumably to drain the energies of the opposition players, making it difficult for them to chase as temperatures would just get hotter as time passed by.

Out went the negative thoughts, and in walked our two openers, Japan national women’s team opener Madoka and a somewhat less recognised Anton. With cherry in hand was young 13-year old Kazumasa Takahashi, who just seems to get better every time I see him play. With some moisture in the air, swing was abundant, and after a peach that beat Madoka and a few wides, it was Anton’s turn to face the third ball of the first over. First up was a dangerous yorker headed for middle peg, if it weren’t interrupted by a skilful forward defensive from Anton’s willow. A treat to watch, the delectably simple stroke led us to think that a big innings from Anton was imminent. Next ball, however, as Anton shaped up for a heave over mid on off a tempting half-volley, the ball found the edge to be safely pouched by the ‘keeper. 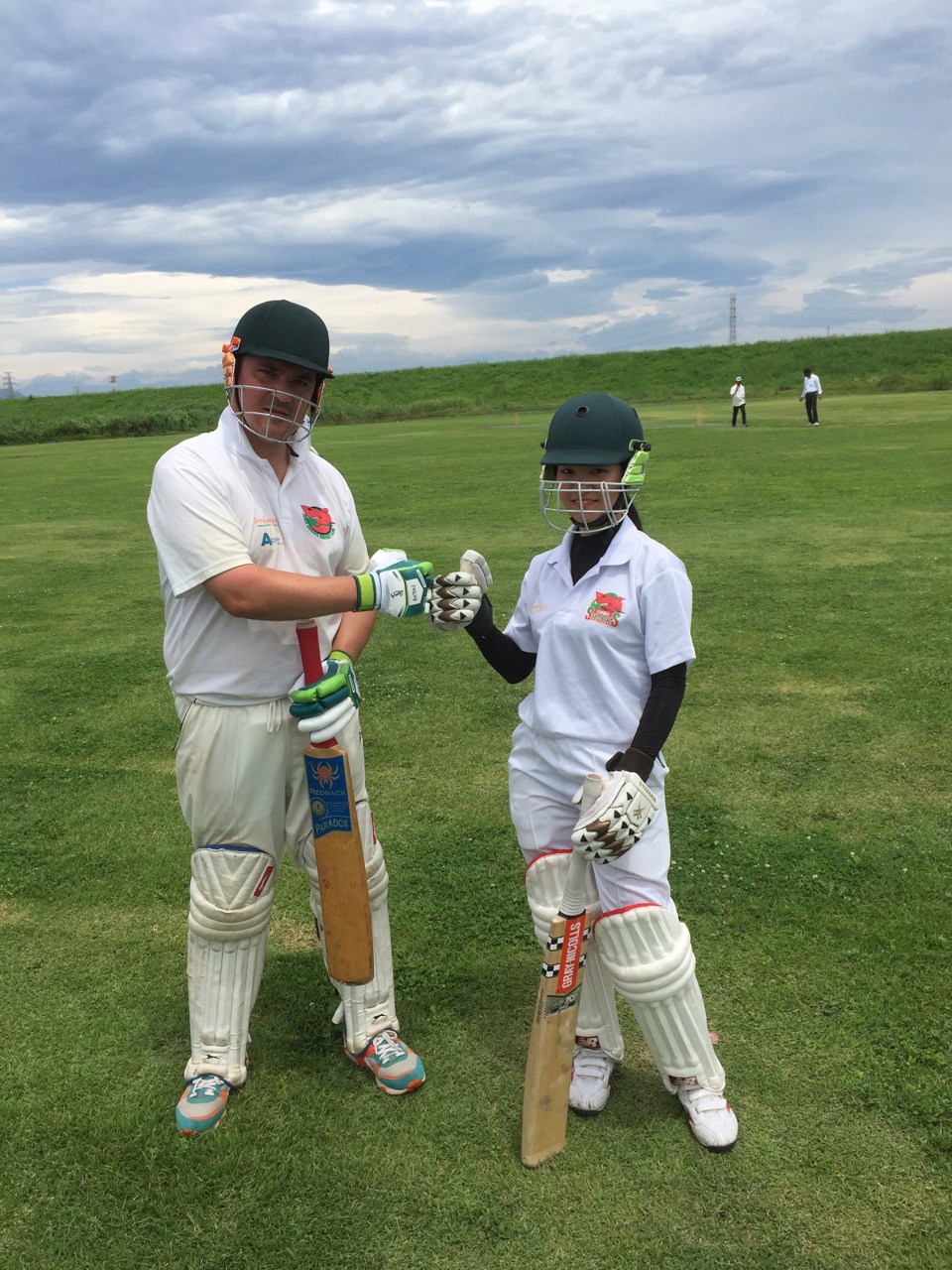 However, even as one batter was back in shed, the next batsman Kavin, fresh from a brilliant 62 against the Tigers 2nds, looked in good stead, as we got through the next two overs unscathed and looking fairly comfortable, although the runs column on the scoreboard did not reflect as such. More importantly, the mood in the Sharks camp was still perfectly normal, as all ears may or may not have been on a detailed analysis on the laws of thermodynamics by Charles Steinhardt, in his second stint with the club, fresh from some practice at a local club in the U.S. However, just as everyone started to relax, a top-order collapseTM ensued, with Madoka, Kavin and Limo dismissed in quick succession with the Sharks score at 17/4 after six overs, a total from which the runs off the bat could still be counted on one hand.

All this brought together at the crease two players whose batting style differed from each other as much as night and day, Terry and Charles. After some dogged resistance from the former and some wild hoicks bringing mixed results from the latter, it looked like a partnership was starting to build. However, Terry tried an uncharacteristic paddle off the other 13-year old bowler Reiji Suto, only to find his stumps in a mess, thus bringing an end to the stand. More of the same followed after Molloy walked in, with Charles hitting a lusty blow over the infield for four, but being bowled by a left-arm paceman with a diagonal run-up only a few balls later. Koji too had to see the umpire raising the finger of death, falling LBW to Suto. Even though so much had happened, only thirteen overs had been played by that point, with the Sharks score at a measly 32/7. From here, it would require some application by the tail to at least double the score and take ourselves to a defendable total.

At this point, I walked into the middle, aiming to forge a handy partnership with Molloy. Although I found the lines and lengths of the aforementioned left-armer I. Gunathilaka slightly awkward, Molloy had no such problems, hitting him for three boundaries on his way to 22 from 26. However, the bowler had the last laugh as he found a ball in his inventory that nibbled the edge of Molloy’s bat, making it 58/8, with Takuma the next man in. He pulled out his trusted sweep from his fancy repertoire of shots early in his innings, but it wasn’t to be this time for Takuma with left-arm spinner Shizuka Miyaji finding the top edge that was safely pouched at short fine leg. 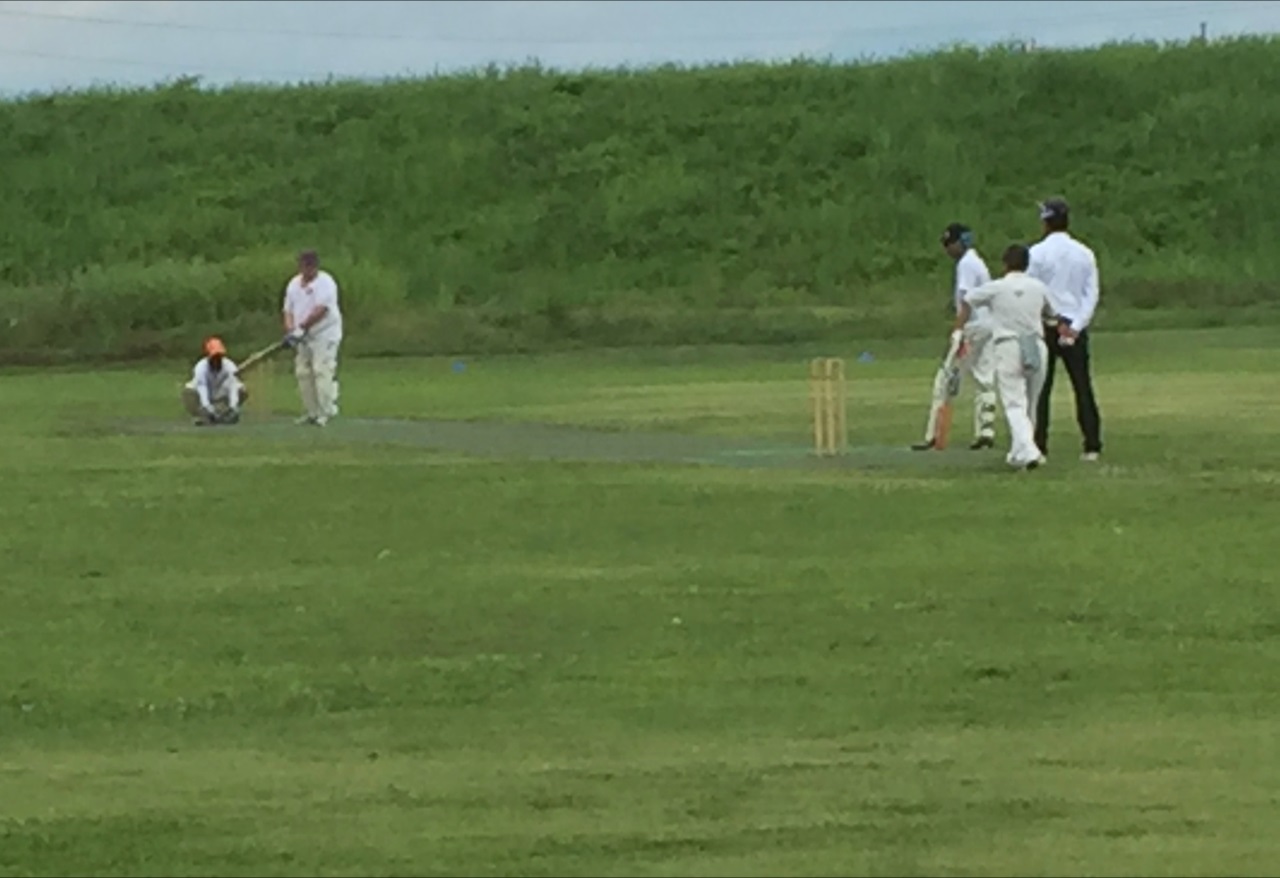 The last-wicket pair, myself and captain Thurgate played out the good balls, ate up the wides, and nurdled the singles and the occasional double, and although the deceptive flight of Shizuka was difficult to get away, we were slowly but surely building. However, this partnership was probably too little, too late, as it ended on the unlucky 13, with my tame dismissal, caught and bowled by Shizuka. I ended up facing 44 deliveries, while only managing to score a grand total of 7 in doing so. Well, let’s just say that innings can be looked at as either a struggle or a rearguard (let’s consider it to be the latter ;-)). This is how we found ourselves 73 all out, as a result of an extremely disappointing batting performance. After this debacle, a bowling firestorm was needed to overturn our fortunes and somehow find a way back into this game.

P.S. A shout out to the Sano team for handling what could have been a heated situation with utmost sportsmanship. A throw from the deep hit the stumps while I, the batsman, was out of my crease trying to evade the ball, after making my ground once. The umpires made a composed and unbiased decision of not out which was accepted by the Sano side without any further drama.

Opening the bowling for the first time in a Sharks uniform were myself and Koji. After starting with a chest-high full toss bowling the first ball of their innings, I slowly gathered my rhythm. Koji, on the other hand, got to work straight away, bowling a beautiful over which proved that line and length was good enough to puzzle batsmen. The pressure he created saw us reap reward, with me getting wickets on the first and last balls of my second over. After another over of Koji’s brilliance, the skipper decided to be proactive and bring on the spinners Takuma and Molloy.

Meanwhile, young Kazumasa looked good in his stay at the crease, hitting a lovely cover drive during his innings, but was left undone by a good catch by Takuma off his own bowling. From the other end, Molloy did what Molloy does best, bamboozling one batsman after another with big turning leg breaks, slipping in the occasional well-disguised wrong’un. His fourth over, and the twelfth of the innings deserves a honourable mention, where he beat both edges of the stubborn opener Hasantha numerous times, before the batsman hit a rank long hop straight down the throat of a well-stationed Charles at deep midwicket. A thoroughly deserved wicket, and certainly an equally memorable one as well. At 29/4, Sano looked in a spot of bother, especially considering the momentum that they held so firmly less than an hour prior to that.

The tidy job being carried out by Molloy from one end prompted the captain to keep him in the bowling attack, this time in tandem with me. Not to forget a resurgence of sorts from the returnee Charles, who conceded just one scoring shot from his lone over and no extras either. I reckon the days of the filth-o-meter are long gone, and we shall soon probably be reading research papers about cricket just as often as those about physics under the name of Charles Steinhardt. While Molloy continued to take wickets on his way to an awesome five-for, the best of whom was a ball with just enough turn and bounce to send the ball ballooning up in the air into seemingly vacant space off the bat of Mihindu, before being intercepted by the outstretched hands of Terry diving forward full length at wide slip, triggering scenes of jubilation never seen before on a cricket field, I tried my level best to bowl in attacking areas, mixing a few yorkers as well as my first-ever bouncers, trying to help the Sharks pull off an unlikely heist. However, in the end, the explosive cameo by Rukmal de Silva, who to his credit, was the only opposition batsman who could pick Molloy, took Sano to a deserved victory, with us just not having enough runs on the board for the bowlers to play with.

Nevertheless, a lot could be taken out of this game. The catching as well as the ground fielding seem to be getting better by the day for us, and all the players wore their heart on their sleeve for the entirety of the second innings, taking eight wickets of the opposition without ever losing faith, even while our skins were being baked in the oven that is the (in)famous heat and humidity of the northern Kanto plains. Forget WACA, Sano 1 should be called ‘The Furnace’. The match was played in good spirit by both teams, and credit must go to the umpires who also had to withstand the sun. In my opinion, assuming we keep this up, a win is just around the corner!