The Sharks 1st XI travelled to the SICG to take on the in-form Wyverns on a tired pitch more resembling a fifth-day Pune wicket than one that might be found in the middle of the lush Tanuma field.
Both teams had selected no fewer than five Japan National squad players in a match that would surely go down to the wire.  Stand-in Wyverns skipper Kazu Ogawa won the toss and announced his decision to bat about a microsecond after the coin had come to rest on the grassless wicket.

Rui Matsumura took the new ball and it soon became apparent that scoring would be hard work. The young quick’s first three overs read “M M M” and his captain, fearing that the few spectators in attendance may die of boredom, had no choice but to drag him.   He was replaced with young labrador-come-fast-bowler Nozomi Tomizawa who celebrated his 20th birthday in style by picking up two quick wickets.  This brought Rinsei Sawada and Bebe Miyaji to the crease. The two obviously don’t subscribe to the old doctrine of “putting value on your wicket” and set about launching into the Sharks bowlers.

However, young Tsuyoshi Takada was to have none of it, claiming Sawada with an absolute jaffa. You do not often see left-handers bowled around their legs by off-spinners but Takady was able to produce a ripsnorting delivery that was certainly enough to earn him the Dr Wheatgrass Highlight of the Match.

Takuma Yamashita joined the off-spin convention and gained immediate success by having Miyaji stumped thanks to a very sharp piece of glove work by the much-improved Marcus Thurgate. The kid has been solid as a rock behind the pegs recently and is on his way to becoming a very good player.  Sensing that some significant spin was on offer, the captain brought on himself and the mystery man Mahesh Kumar. Both were able to snag middle order wickets.

Frustratingly, several catches fell agonisingly short of fielders and the Wyverns scraped together some important runs. One casualty of the innings was the elastic of Chris Thurgate’s pants, which did not quite hold up to a slow-motion chase to the boundary line. Conscientious umpire as he is, Thurgate politely signalled four runs before retrieving his pants from around his ankles.
Matsumura then came on for a second spell and immediately ripped through muscle-man Iwasaki and big bad Buddhika with some text book reverse swing.

The Wyverns had been bundled out for just 123, but the Sharks knew it would be a tough chase and were in no mood for complacency. Seven of the Wyverns wickets had been caught in front of the wicket so being patient and playing the ball late would be the key on a slow, weary pitch.

Muneeb Siddique was the first victim, spooning a catch to mid-wicket before Thurgate the younger found the fielder at cover. Takada joined Bedingfield at the crease and the two forged a painstaking partnership. Eventually Takady was the man to fall, mistiming a drive to the fielder at square leg.  His dismissal hastened and old-fashioned Sharks collapse. Bedingfield skied a full toss and then Dave Limin and Chris Thurgate were removed in quick succession, both, you guessed it, caught in front of the wicket.  Tomizawa and Kumar were unable to put a dent in the scoreboard as Bebe Miyaji started to make inroads with his loopy off breaks.

At 8/70 the Sharks seemed dead and buried but Asala and a limping Matsumura had other ideas. The two made batting look pretty easy and all of a sudden the Sharks contingent watching from the sidelines realised that there weren’t actually that many runs left to get. 30 required became 20, which became 10 as the Sharks onlookers grew more vocal in their support.   However, in a moment that would decide the result of the match, Miyaji got a ball to pop and turn into Asala’s thigh pad, the ball nestling in the hands of Yoshi Uehara, who, until that point, had been about as useful as tits on a bull at short leg.

Had the ball flicked Asala’s bat or gloves on the way through? The umpire turned down the appeal but Asala decided to walk nonetheless. A gesture of sportsmanship in a league where batsmen often refuse to walk after having actually been given out.  Yamashita came in at 11 and was not going to die wondering, immediately launching into his trade-mark slog sweep. A couple of swipes took the Sharks within two runs of the Wyverns. Could it be another youngster to the rescue at number 11? Unfortunately Yamashita was unable to repeat the heroics of Bhatia in round two, well caught on the mid-wicket boundary by Takahiro Aoki. 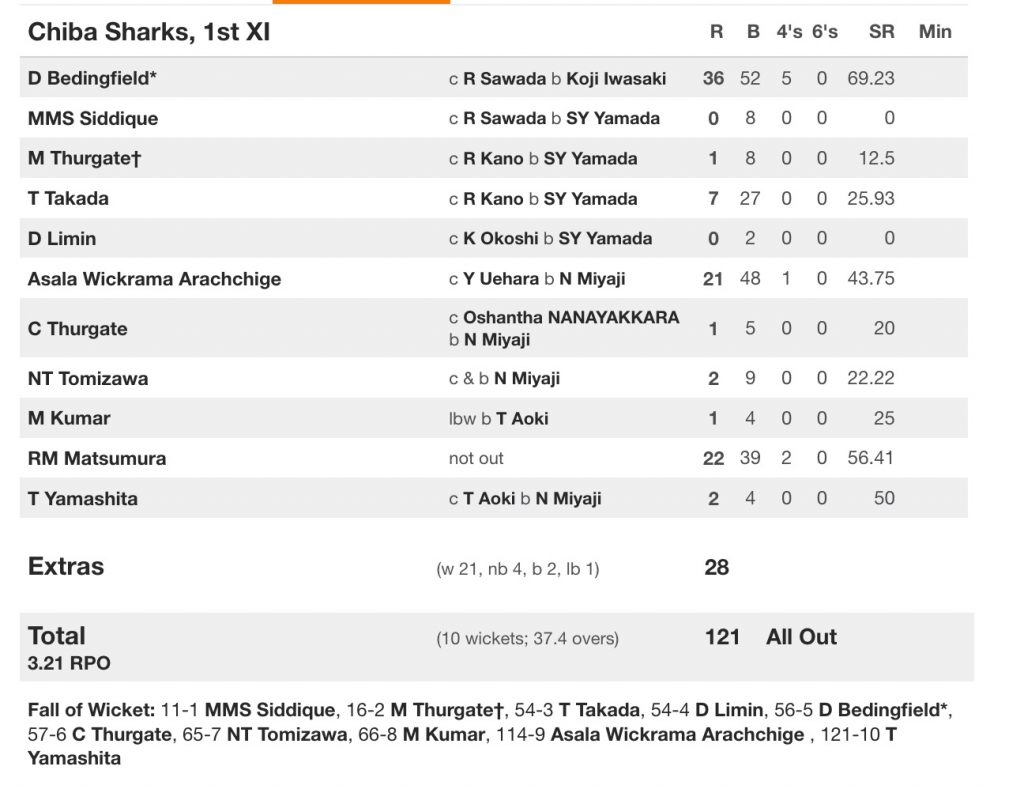 The Sharks conducted their post-mortem on the Tanuma outfield and have set themselves for a big match against the Wombats in round five. All that was left was for the Sharks lads to sing happy birthday to young Tommy and force him to down a warm happoshu. Welcome to the club.