SHARKS FALL AGONIZINGLY SHORT. . . OR DO THEY? YES, ACTUALLY THEY DO

There’s always a doubt about what qualifies as canonical. Fans of the Virgin Mary still rail against Pope Innocent I for putting an “Apochryphal” sticker on the Gospel of St. James, and many a cogent treatise has deplored the failure to include the Family Guy Season 13 opener “Springfield Guy” among the 618 officially-recognized Simpsons episodes. With the second game of the Sharks May 20 T20 double-header being (a) not for points, (b) reduced to a 12-over contest, and (c) having a team facing the Falcons that contained only about 65% Shark meat, your reporter is hoping that the lack of statistical posterity granted to the afternoon game will make his reporting duties a little less onerous. And with a morning game as nail-biting as this one, I think we can still hit that 1,000-word target middle stump.

Whether you came out for one game or two, you’d have arrived on one of those totally perfect Kanto May days – blue sky, warm sun, cool breeze – that make you wish the Shinto weather gods would forget about all that rainy season and steamy scorching summer mischief and just keep it like this all the way to November. Both teams were slow to assemble, and it was closer to 10.30 than to 10.00 by the time we took to the field. Takady, reportedly an all-Japan Junior High School Jan-Ken-Poi champion, is still befuddled by coin-tossing, so once again we got to bowl.

Viv and Gaurav opened with two overs each, both firing a mix of nasty dot-getters, smackable looser ones and the occasional wide. One of the Stars openers looked a bit stuttery, especially against the extra zip of Viv, but regular Shark Sumon was looking ominously comfortable beneath his Rising Stars helmet. 28-0 after four overs.

First change bowlers Sankar and Dave hit their lengths immediately, and in the latter’s second over we got our first breakthrough when the universe aligned in the serendipitous synchronicity of Dave deciding to bowl his slower ball at exactly the same moment that the previously cautious Mr Imam decided to charge the bowler. One of those where as a batman you swish, miss, and start walking, not even bothering to wait to hear the inevitable death rattle. Sankar was not to be outdone, and when in the next over he induced an overreach for a duff drive, Rubal was there to nonchalantly chest the ball onto the stumps. 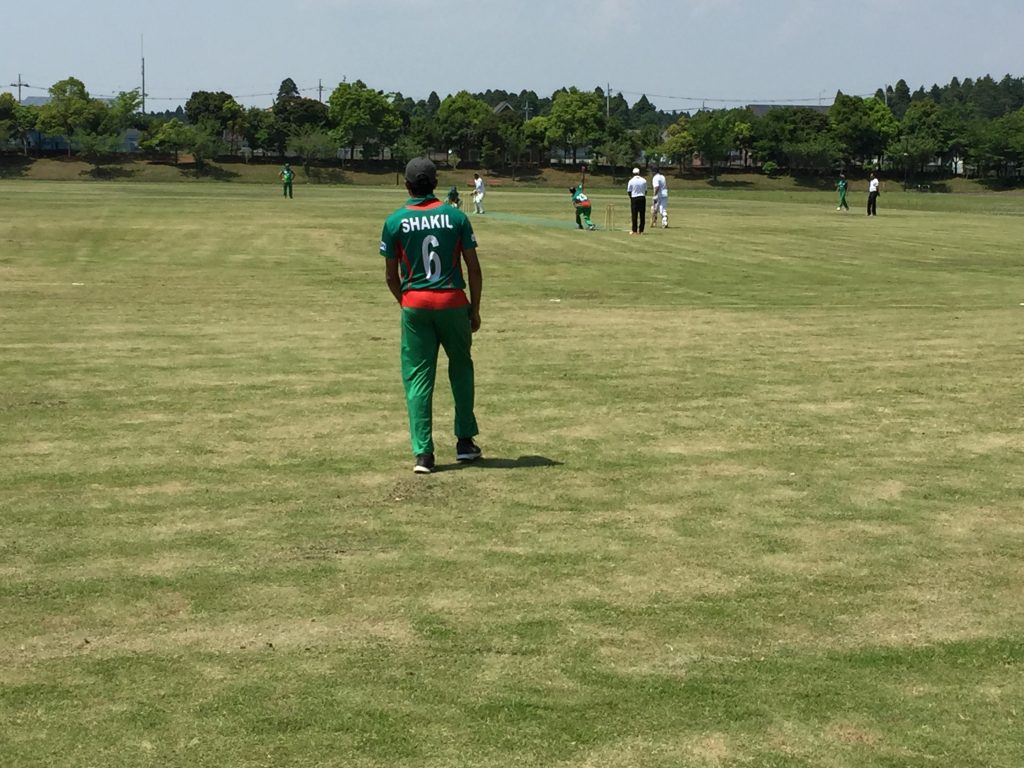 Next up Krishna, who was still in range-finding mode when he dropped a delicious-looking half volley to Stars number 3 Parvez, who smashed it into Takady’s chest at extra cover. Fortunately Takady had his hands there as well. Same bowler picked up the fourth wicket by clean bowling the Stars number 5.

Another familiar face we had to face was the big-hitting Sayeed, who signaled his intent by walloping Takady for a meaty six before the latter got his revenge, tempting Sayeed down the track for an air shot which allowed Rubal to execute a much more conventional stumping.

The regular taking of wickets had the desired effect in slowing down the run rate. On the unpredictable Flix pitch it’s hard for even a capable batsman to play his shots from the get-go, and this difficulty becomes more pronounced among the tail-enders. Still, the Stars got a valuable contribution from number 7 Mohibul Hasan, whose 16 from just 15 balls was the main factor in pushing them into triple figures. His fledgling partnership with Murad was ended when Sankar got his sometime teammate well caught in the deep by Neel, and Dave closed out the innings with an impressive piece of death bowling, taking a wicket and conceding just two runs in the last of the Rising Stars 20 overs. 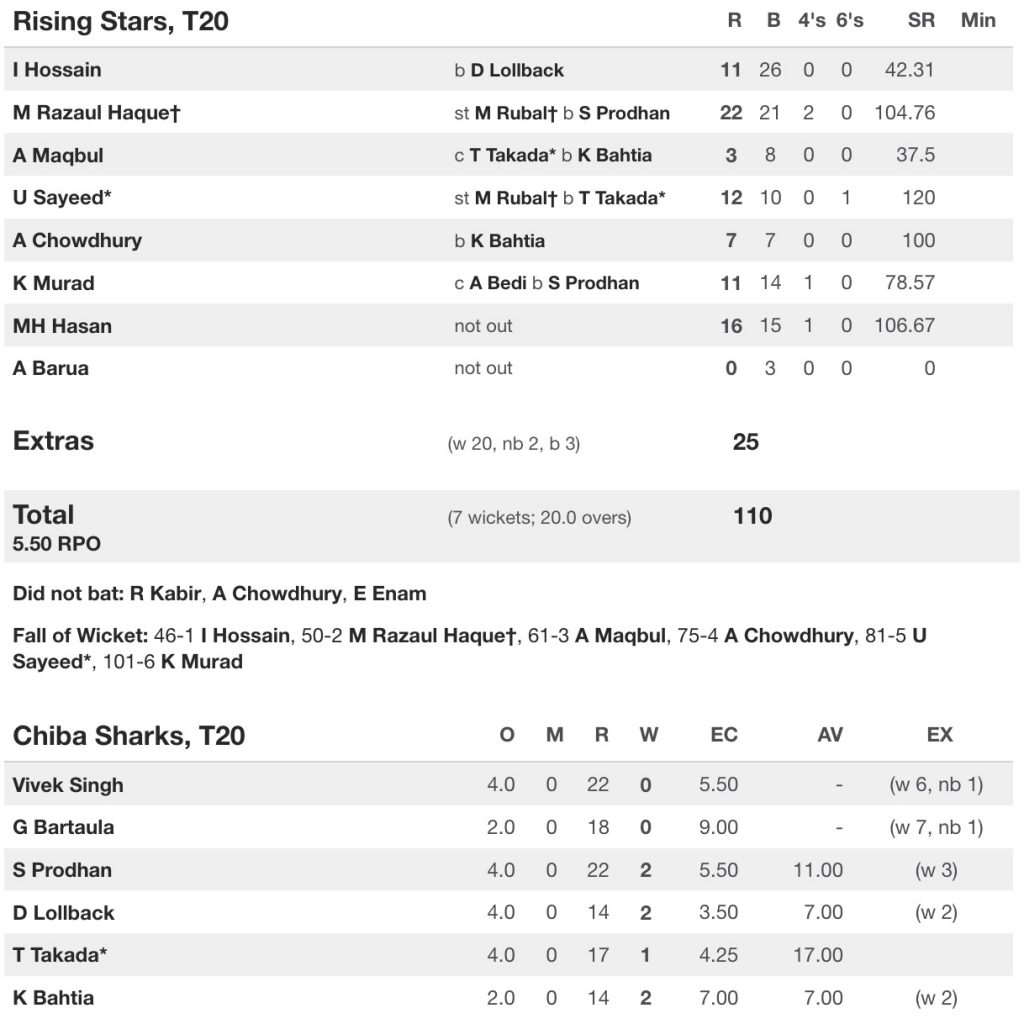 The scorecard said that the total required for a Sharks victory was 111, but as your reporter was probably the only Englishman in Sanmu City that day, the significance of the dreaded Nelson went unremarked. Sankar and Kavin opened the batting and almost took us halfway home in a 49-run partnership before the Pacific breeze prevented Sankar’s lofted drive from reaching its intended target of the scorer’s table, instead depositing it into the waiting arms of long on. 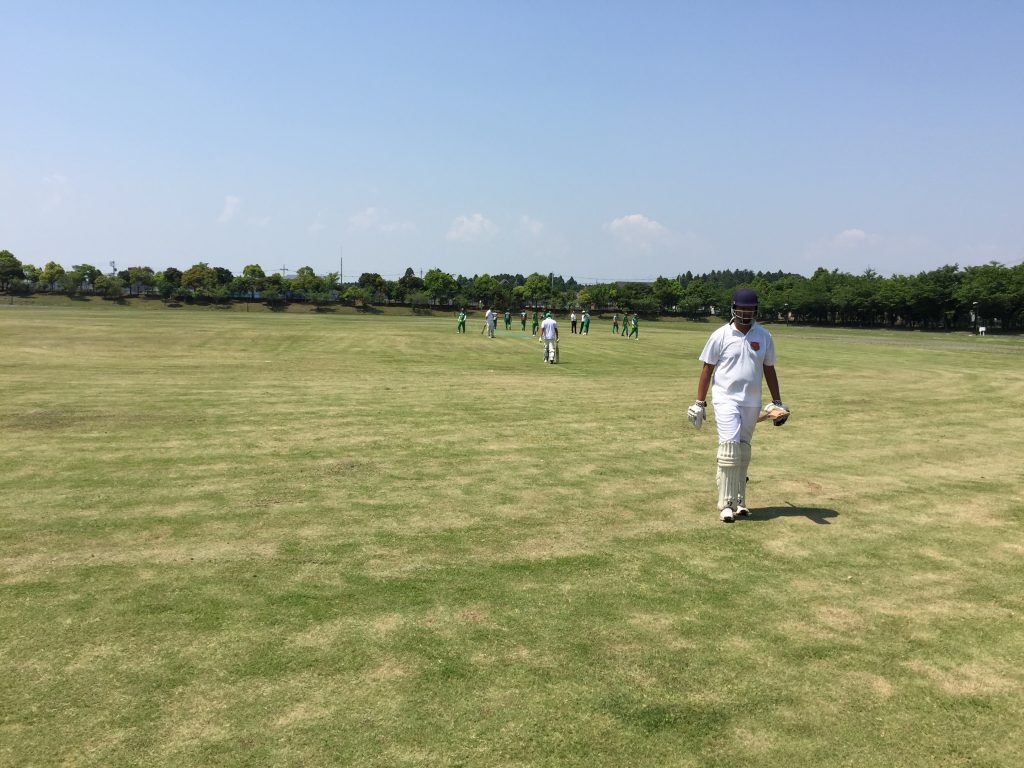 Takady became the not-so-proud recipient of Le Canard d’Or, and Kavin followed him home soon after thanks to a smartly-taken c&b. This brought together Dave and Viv, who looked to steady the ship and put a bit more wind in the sails of an innings that was in danger of becoming becalmed. Dave did it by taking the singles, and it was probably while he was trying to get his breath back after the fifth of these that he got trapped leg before.

Viv went for the swashbuckling approach, and a 15-run 14th over got us almost up to the required run rate for the first time in the innings. But the loss of Viv, karaburi sanshin with a swing that would probably have downed a Narita-bound airliner if he’d connected, followed quickly by Anand and Rubal, cost us a lot of momentum, and when Mairaj departed after an aggressive cameo we were left needing 26 from the last 18 balls.

Cometh the hour, cometh the man, and it was Gaurav who stepped up, showing admirable hustle on his way to an unbeaten 19 off 14 balls with just two dots. 12 of those runs came in a frantic final over, which also yielded two wides, taking us to within one agonizing run of what we thought was the Rising Stars total of 110. Until…

…the umpires took a look at the Rising Stars batting card and chalked off the phantom no-ball that had been awarded against Gaurav. The Stars total was 109, the game was a tie. Until…

…the umpires took another look at the Rising Stars batting card and found an uncounted wide. The one-run victory was re-instated.

These increasingly frantic perusals and re-perusals of the scorecards went on with most of the players unaware of the final final verdict. Several Sharks, including your reporter, headed home thinking they had a share of the points in their bags. Pity, because that would have been a fitting end to what had been throughout a very well-fought contest between very well-matched teams. 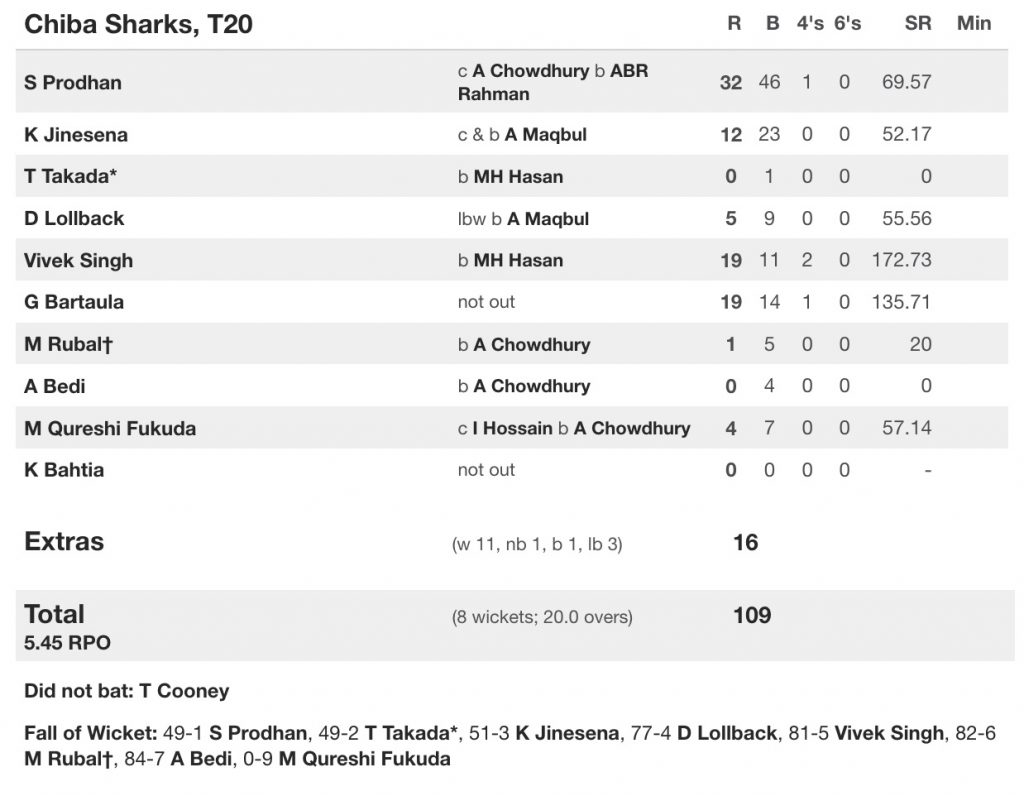 And after lunch, for those who hadn’t already had their fill of cricket, there was an afternoon friendly between The Rising Sharks (The Chiba Stars?) and The Tokyo Falcons. The late finish of the Japan Cup game meant that the scheduled T20 became a T12, but for a scratch game on a warm afternoon it was an impressively competitive contest.

As no scorecards were kept there’s no documentary evidence to dispute your reporter’s claim of carrying his bat on the way to a match-winning half century, but back in the real world the Sharks / Stars XI narrowly failed to chase down a target of 98 runs. Standout moments were a splendid one-handed slip catch by Sankar, a first wicket in a Sharks shirt for Jay, and, er… … that’s about all a mnemonically-challenged reporter can manage ten days after the event.