SHARKS 2nds TAKE IT TO MAX WITH MINIMUM TROUBLE

On May 27th, Sharks 2nd XI took on Max 2nd XI, seeking a first consecutive win for 2017. Following some overnight rain and early morning drizzle, an 11 a.m. start seemed by no means a certainty. In fact, Sano 1 had some decent-sized puddles in the bowlers’ run-ups at one end of the pitch in particular. Thankfully, though, the skies remained merely overcast and the temperature was a pleasant 18 degrees.

Lining up for the Sharks on this occasion were: Sumon, Kavin, Koji, KB, Terry, Rakib, Molloy, Neel, Nick, Mairaj, and Sankar, captaining his fourth consecutive 2nd XI match for the season. Faced with a slow, wet outfield, but also an unpredictable, damp pitch, Sankar was left with a bit of a dilemma at the toss but ultimately chose to bowl.

Making his return from a year off since his debut match, Nick opened the bowling and immediately settled onto an impeccable line and length full outside off stump, drawing a respectful defensive shot. He surprised perhaps even himself by drawing a healthy edge the very next ball that was easily snaffled by Sumon behind the stumps, with the left-handed Bidyut drawn into a flashy drive. Nick momentarily strayed with a full toss that was dispatched to the cover boundary by Harris, but struck back next ball, with a thin inside edge going on to clip the top of off stump. One over down, and Max were already reeling at 2 for 4.

Rakib opened up from the other end, after having shown promise with the ball in his debut match. He too was accurate from the outset, and troubled Max’s young pairing of Takashi and Ichiki with brisk pace and some unnerving bounce at times. Both Nick and Rakib maintained tight lines and both batsmen were forced to work hard just to preserve their wickets. Rakib was eventually rewarded for his perseverance, piercing the defense of Ichiki with a fullish ball that smashed into off stump. Eight overs down, and Max had only crawled to 18 for 3.

Perhaps by now they might have fancied that some of the shine had been worn off the ball, and batting might get easier. Indeed, Sharks’ clothmasters (at various times Terry, KB, Molloy, and Koji) were kept busy constantly trying to prevent the ball from going completely soggy and losing any semblance of a seam. To this end, they were helped greatly by the number of deliveries that sailed through to the keeper; less so by the occasional/frequent drop on return to the bowler. 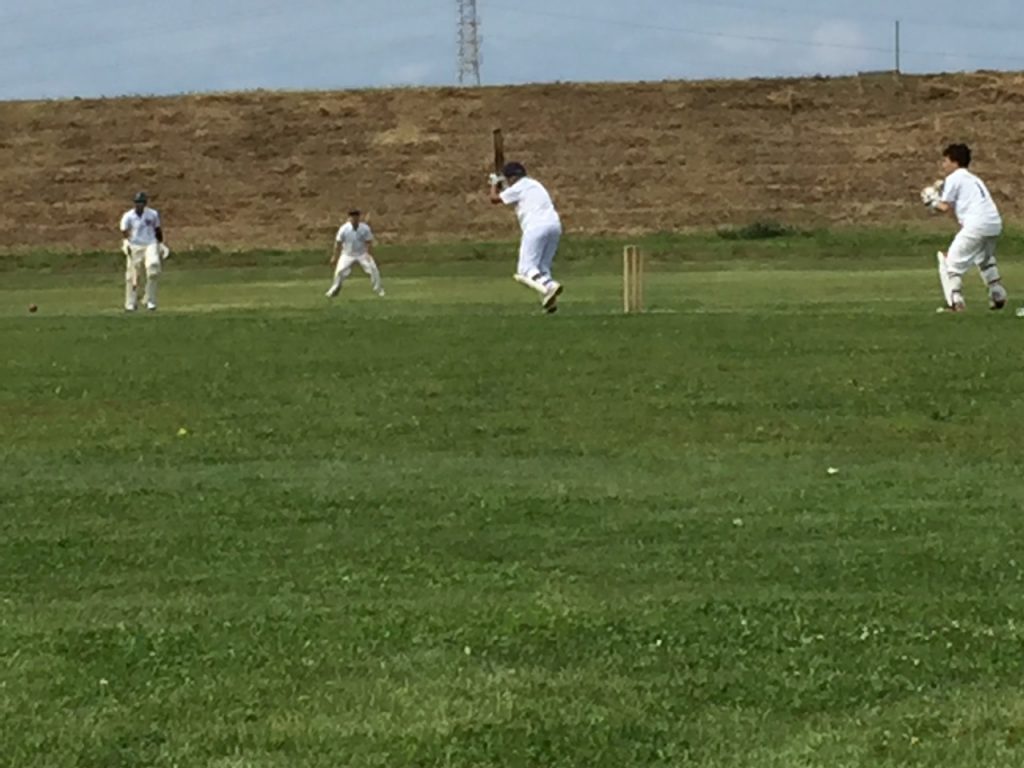 ho finished with an excellent return of 2 for 9 off 4 overs, Neel came on as first change and showed good pace and rhythm, but then struggled to control a ball apparently swinging both ways. However, he came back brilliantly from three wides to finish his first over with a beauty that caught a faint outside edge from the dangerous Naoki and had Sumon lining up an easy catch behind the wicket, only for off stump to intervene and ruin any such plans.

Sankar took over after Rakib’s miserly spell of 1 for 5 off 4 overs, and carried on the good work with a maiden straight away. He then went one better in his second over with a wicket-maiden, as Hayato became the fourth Max batsmen to be dismissed bowled. This brought to the crease the dangerous Chula, with 28 overs still remaining. Takashi continued to stonewall at the other end and Chula looked itching to play some big shots but was contained by some continued accurate Sharks bowling. He did eventually start to cause some damage, though, firstly with a cracking six over deep midwicket that may well have ended up in the river. Any hope of retrieving the ball was rightly abandoned in an instant.

Heading into drinks at the 15-over mark, the Sharks were well placed with Max at 32 for 5. What’s more, one of Max’s players had apparently been taken to hospital after suffering an allergic reaction to a bee sting, shortening their lineup to just 10 players. After the resumption, Sharks’ spin combo of KB and Molloy took over. KB enjoyed immediate success with his first legitimate delivery, claiming yet another bowled dismissal as the combination of a moderate breeze and his patented doosra/outswinger proved too much for the resilient Takashi, whose stonewalling masterclass was ended at 1 from 41.

Along with KB, Molloy initially maintained tight lines, and with three Sharks hounding on the leg-side boundary, the frustration took a toll before too long. On the final ball of a Molloy over, Chula stepped out of his crease but could only get pad to a ball that pitched around leg stump, and set off for a non-existent single. Partner Okajima was caught short as Molloy swooped in on his follow-through and Sumon did well to collect a slightly wide-off-the-mark underarm before whipping off the bails at the striker’s end.

KB remained miserly and continued to beat the bat frequently. He came perilously close to a second wicket when Chula survived a spirited stumping appeal after Sumon quickly whipped off the bails from an off-side ball that drew air from the swinging blade. At the other end, Molloy had lost his initial accuracy and began mixing in a colorful assortment of full tosses and leg-side wides. New batsman Inagawa provided a solid foil for Chula, showing solid defensive technique when required, while also putting the bad ball away to the boundary.

Their partnership of 36 took Max’s score to 78 before Molloy struck with a rather fine delivery that pitched around middle and was just full enough to draw Inagawa into a tentative forward defense, but turned just enough to pass the bat and clip the outside of off stump. No. 10 batsman Mine successfully played out the rest of the over, and Chula then looked to go into overdrive.

Stepping out of his crease, he managed to deposit one more six over the midwicket region from the first ball of KB’s next over. On this occasion, the ball did make a return, albeit with a blackish tinge of car roof. A single off the second ball, however, brought Mine back on strike and KB capitalized immediately, beating the batsman all ends up with a flat delivery that crashed into middle.

This brought Max’s innings to a close at 86 off 27.2 overs. Bowling figures were generally excellent all round and wickets were evenly spread, with all bowlers managing to take at least one. There were no genuine chances put down in the field, and, perhaps coincidentally, we finished with a remarkable seven bowled dismissals! (possibly a Sharks record) Some electric fielding as usual from the likes of Terry and KB in the circle, and some strong returns from Neel on the boundary as well.

In reply, Sharks opened with Kavin and Sumon, with the latter looking to maintain some solid batting form (albeit with Rising Stars). Kavin set the tone from the very first ball, carving a cut away to the point boundary. After pushing a single on the third ball he saw very little of the strike, as Sumon took over with a flurry of boundaries. He was quick to jump onto the back foot when the bowlers erred short, and stroked one glorious cover drive to the fence. 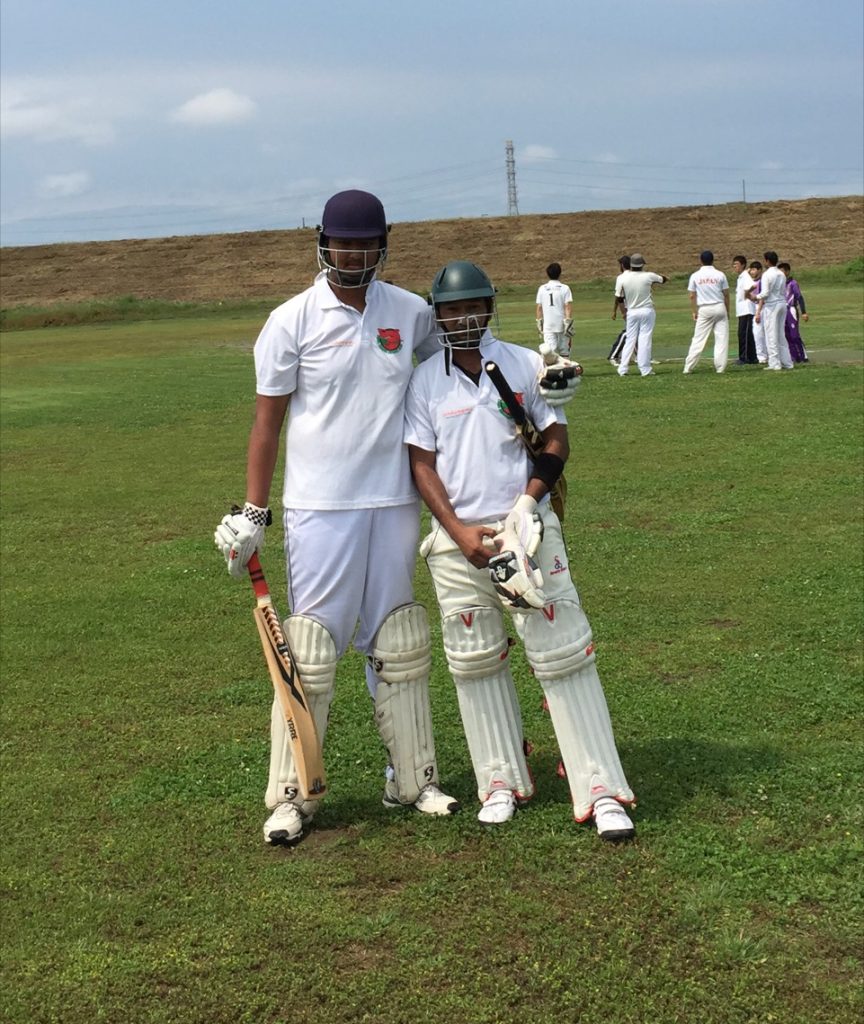 Some wayward bowling added to Max’s woes, with umpires Ranjith and Ghodasana getting plenty of opportunities to stretch their arms. Indeed, it was a tight competition between Sumon and wides for top scorer, with both intent on leapfrogging the other. After just four overs the Sharks had raced to 49 without loss, making it clear that an early finish was well and truly on the cards.

Max’s first- and second-change bowlers Chula and Yasuda managed to stem the flow of runs somewhat, but Kavin and Sumon were all too happy to adjust from a breakneck gallop to a mere canter across the finish line. In fact, both batsmen did need to see out some testing deliveries, with Chula in particular exerting some steep bounce on occasion.

Sumon ultimately broke clear of wides, reaching a sparkling 36 not out (vs. 27 wides), but Kavin was left with the final honors and brought up victory with a supremely stylish straight drive down the ground for four.

And with that, the Sharks sealed a resounding 10-wicket victory. The comprehensive nature of the win probably left a few players itching for a chance to contribute more next time around. But, no doubt, this is unlikely to prove a persistent problem for those at no. 3 (or even much lower) in the batting lineup…

Thanks to Max for a game played in fine spirits and to umpires Ranjith and Ghodasana for their services.

A BIG SHOUT OUT TO THE BOYS WITH THIS SCORECARD  – (Just look at the number of clean bowled!!) 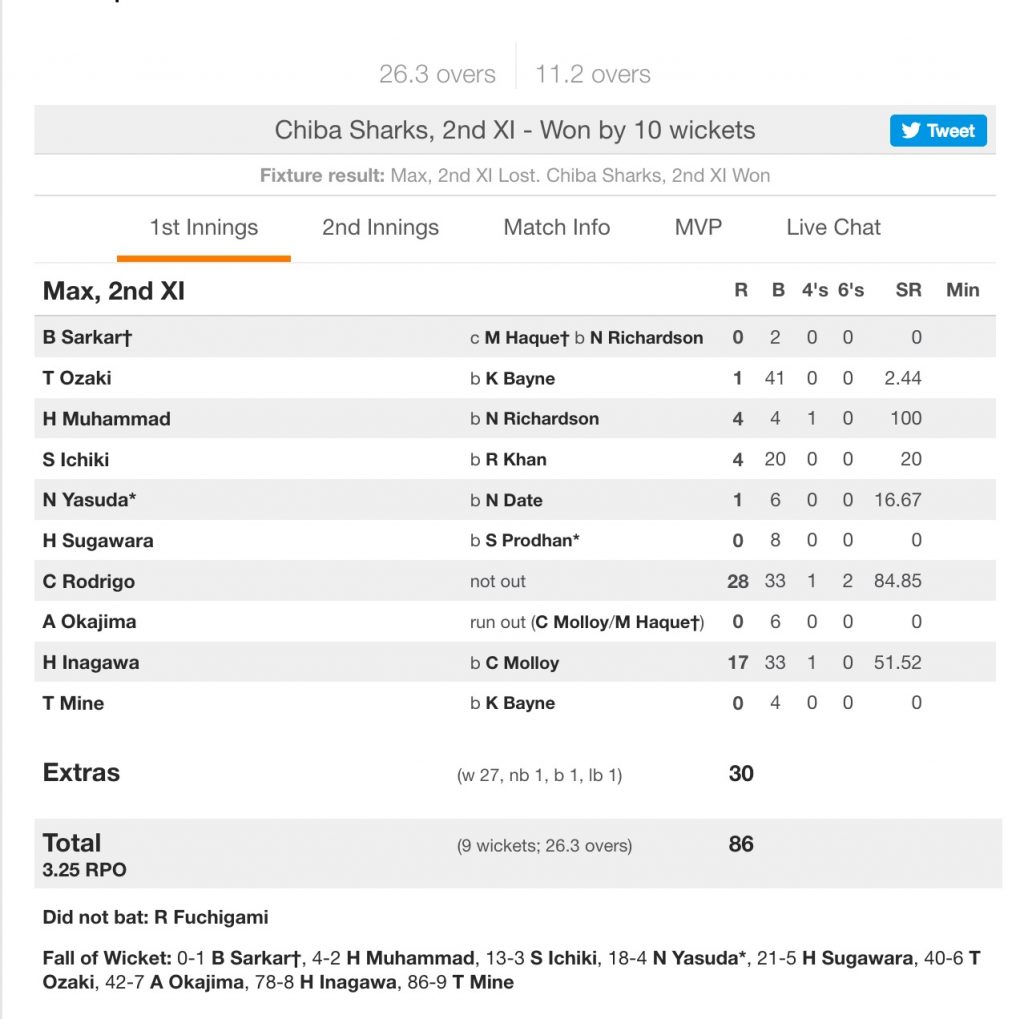