Hungry Sharks have their fill

While Max Cricket Club’s openers made 237 in their JCL match up north, it wasn’t the only thing happening in Japan cricket as the mighty Sharks took on the Falcons at the great venue of Sammu in the east on a bright, blessed day.

With captain Nav winning the toss, it was no surprise to anyone that we went into bat on the tricky Sammu “Flicx Pitch.” Sharks openers Dhugal and Vivek proved the call was right from the very first over when they smoked a few to the boundary. With a textbook T20 opening partnership, they put 50 on the board and both looked set, never looking like getting out, until somehow Dhugal got a big LBW shout from everyone in the field (even fine leg). The umpire raised his finger up to the sky and sent Dhugal back to pavilion for a well-played 26, including 4 boundaries.

Our skipper was the next one in and soon nicked one behind, out for 2.  Dave was next up and got a big “Howzaaaat!” for LBW from the very first ball, which was turned down by the umpire. But another big “Howzaaaat!” for LBW came two balls later, and this time the umpire was confident enough to send big Dave back for 0. Sankar was the new man in. A partnership that seemed important for us could only manage to add 5 before Vivek hit one straight to a fielder, gone for a well-made 22, including two boundaries, one of which was the only maximum for the entire game. 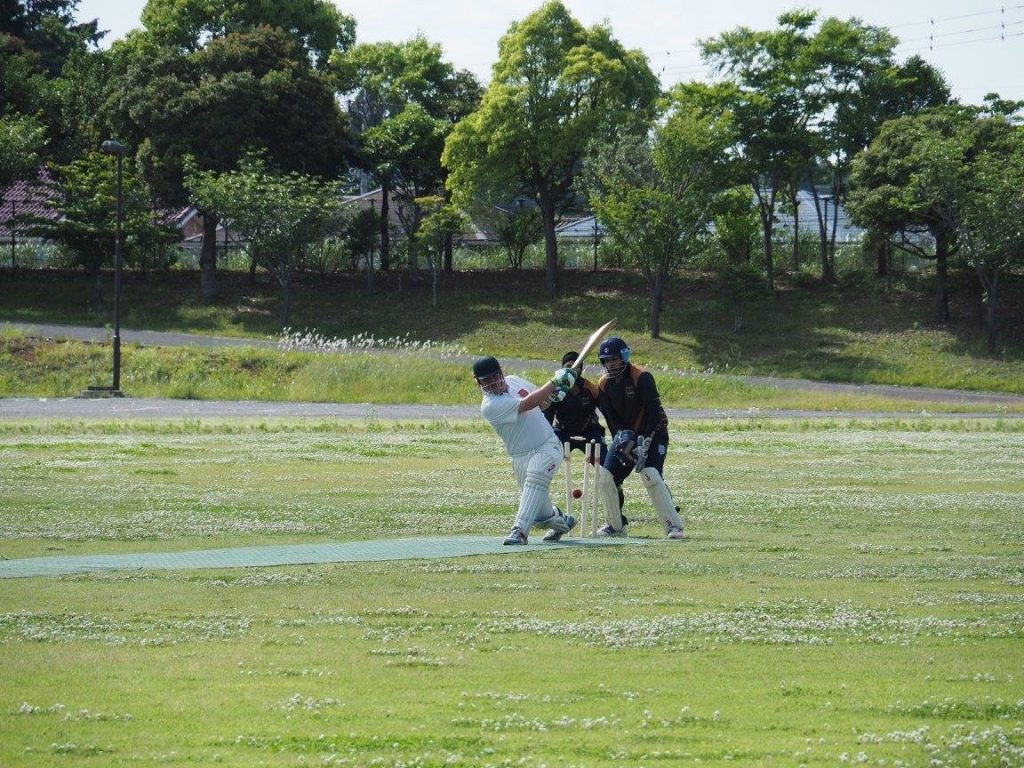 A Sharks collapse began as we only could add 8 runs while 4 wickets fell.  Takady, who hasn’t been in his best Japan Cup form, was the next man in and he played a good innings despite his recent lack of form as he struck 25, with two of his shots rolling all the way to the boundary, while Sankar and Marcus fell for not much. Takady followed soon after as he pulled one straight to a waiting infield.

Signs of another “Sharks collapse” appeared as we only could add 10 after Marcus’s wicket. Anton tried to hoick one over cow-corner but lost his middle stump for a superbly batted 5 (photo courtesy of KB). Mahesh was run out, and Gaurav was the last man gone hitting one back to the bowler as they both could only manage 1. Aditya was the man unbeaten again as he remained without facing a ball. 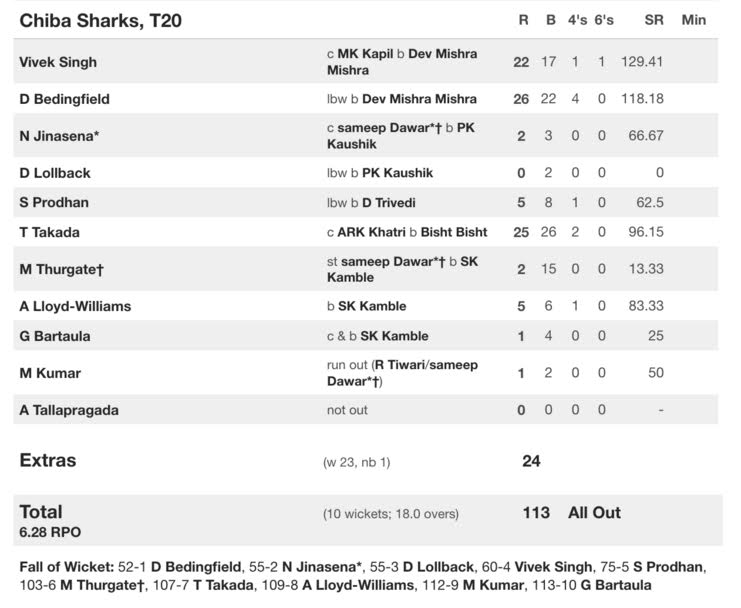 Vivek was the man with the new ball and soon got in act as he removed two men in consecutive balls, both knocking the stumps over. (They probably weren’t the best two balls he’s ever delivered.)  At the other end Aditya showed our opponents what a left-hand seamer can provide.

In the 3rd over Vivek picked up another wicket, this time plumb LBW. The score read 3-13.  Aditya was the next one to pick up a wicket as he delivered one exactly where he needed to make the batsman nick one into the big gloves of Marcus. Aditya then picked up another, and this time big Dave was the man with the catch. 5-27.

Mystery man Mahesh was the man to take the next one as Sankar held on to the catch.  The only decent partnership for the Falcons came at this point of game, as they posted 22 before Dhugal made the breakthrough as Mahesh somehow held on to a catch that removed their highest scorer of the game for 15. Dhugal picked up two more with Gaurav and himself taking catches, as the best bowler in JPL 2016 picked up 3 in his two overs. Gaurav was the man to complete the job, taking only a single ball to get a nick from the last batter.

Sharks did become a bit sloppy at times, but were good enough to complete the job in the 12th over, as we bowled Falcons out for 62!  Sharks won by 51 runs.

Big thanks to KB as he came to help us out by scoring, taking photos and other things! All photo credits go to him. We really appreciate your support! Thanks again!