The contest between the competition’s top two sides could have been mistaken for a school yard tussle, as to who holds supremacy over the monkey bars at lunch time, between the two schoolyard kingpins. Wombats, led by the prolific and ever reliable Alex Patmore have had a stellar start to the season with convincing wins over the likes of Sano and Paddy Foleys.

While the Sharks have too had a great start with wins over last season’s champions MAX and semifinalists Sano, the lads from Chiba looked to add the Wombats to complete the set of wins over last year’s top three finalists. 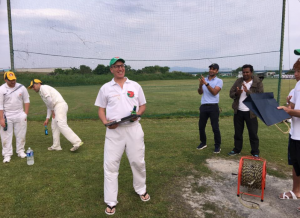 Ancient historians will tell you that the rivalry between these two sides is as fierce as Hannibal vs the Romans and more recently Robbie Williams vs Liam Gallagher, needless to say that it was dubbed as the match of the season and for good reason as both sides have an undefeated record to defend. Ancient historians will also tell you something about Kris Bayne too. Before battle commenced both teams wished KB a happy 111th birthday. He was overjoyed with his incontinence pads and iron tonic.

The contest started in a less than ideal way for the Sharks with Dhugal losing the toss and being asked to bowl in somewhat breezy conditions which favored the southern end. It also meant that pushing into the breeze was going to be tough. Coming into the side for his first game for the season was Wakita and making a return was Tommy, out of the side was Wombat tormentor ‘Mr. Old Everywhere’ Takady, which I am sure would have been a relief for some of the Wombat players as Takady on his two previous occasions against the Wombats took out ‘man of the match’ honors.

Bowling:
The Sharks started with their trademark intensity and enthusiasm with Vicky and Tommy taking the new ball against Patmore and veteran Shearer. Both toiled fairly hard but were blunted by Patmore’s placement and precision with another opening stand of fifty plus putting the Wombats in steady control. Tommy began to tire and evidence of this came when he sent down a few wides in succession.

Dhugal threw the ball to Paul who to date was having a decent start to the season, however his first over was fairly wayward which went for somewhere in the region of 20 as the breeze was having its way with anyone who dare push against it. The breakthrough came when Yosuke found the edge of Shearer’s bat straight to Dhugal in the slips; this brought new wombat Bracefield to the crease and he almost immediately was put down in the point region off Vicky’s probing bowling.

The second wicket didn’t come until the score was well into the 100’s, 123 to be exact when Bracefield was caught by Vicky in his attempt to usurp Rui’s ‘Greatest Catch in the History of the World’. This catch wasn’t flying at 100,00kmh and the ball didn’t have vapor trails on it, but it was one handed and Vicky was airborne, off balance, one for the ages… 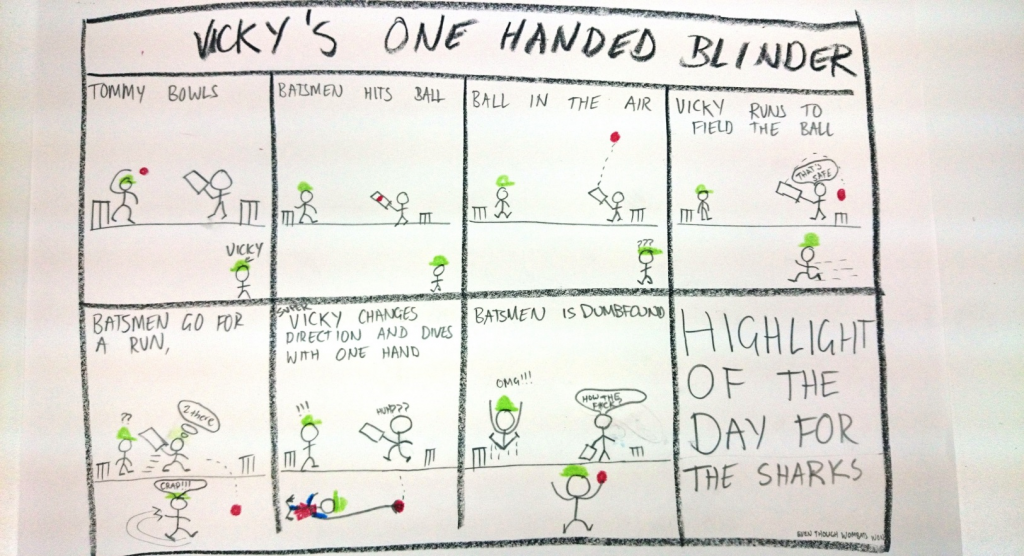 The score quickly became 3-127 when Tommy grabbed his second wicket for the day into the howling breeze, when he trapped Syed in front. In the meantime Alex Patmore had passed his third half century in four games but then aggravated his shoulder which needed cold spray.

It was at this point that Dhugal marshalled his troops together for a change in intensity. Some Sharks sensing a Wombat collapse was on the cards as it, had been accustomed to in the previous three encounters, but it wasn’t to be as former skipper Gavin Beath strode to the wicket and put on a handy steadying partnership before Patmore was eventually dismissed for 58. 4-174 with overs still to bat.

Vivek had a delayed entrance to the game, but when on he quickly brought about the downfall of the Wombats middle order and tail with a fine spell of bowling, finishing with 4-30 from his allotted eight. Wickets to Wakita and Vicky rounded out the innings with the score on 216. A fair fight back considering at drinks the score was 1-120, however, it could have been significantly less if the Sharks had their radar working with 39 wides to the total with 42 extras all up.

As mentioned, Viv was the pick with his four wickets, supported by the other bowlers. Pushing into the wind made bowling difficult, as this bowler/writer can attest to, but Tommy, Yosuke and Wakita claimed five of the wombat wickets pushing into it which was a tremendous testament to these three Japanese nationals.
Notable mentions with the bat, Alex Patmore, who is streets ahead as the competitions top bat again with 58 from 85, former skipper Gavin Beath 46 from 45 and new boy Richard Bracefield with 32.

Another special mention worth making is for KB who, despite his incredible age took to the field on his birthday as 12th man and provided a huge presence in place of some absent Sharks. So, 216 a gettable target at Fuji and with the wind from one end causing havoc for bowlers could benefit the shark’s batsmen.

Batting:
Pav and Nav geared up for a shot at knocking off this total and the very early signs were good, when Navin took to the sky for some momentum-changing batting. However, the momentum swung back when Pav middled one only to find the hand of Bracefield. 1-8 quickly became 2-8 when Navin was trapped in front off Yusry.

Prashant and Dhugal, two of the Sharks most experienced batsmen looked to rebuild and start again. They both looked good with some aggressive stroke play including a “Dr Wheatgrass Whip Through MidWicket” maximum from Dhugal. However, it was soon to be 3-25 again for the Sharks with Dhugal being clean bowled by Yusry for 7.

Paul joined Prashant at the wicket and slowed everything up so that everyone could get a grip on things. With some smart running and a few lofty blows from Prashant to take the score past 50, both batsmen looked untroubled by the Wombat attack in the 8th over, and that brought about a bowling change. Prashant’s tormentor Beath came into the attack and instantly took his wicket with a thick edge to first slip with his first delivery.

4-58 with still plenty of overs to bat, Wyverns match hero Yosuke was looking to repeat the effort that saw him get man of the match in that game. However, it was too much to ask as he was trapped in front for 2 off veteran Shark Hunter Rony Tuluqdar just four balls later.

It was a case of occupying the crease and getting time in the middle for the Sharks batsmen; Paul trying to do that with Asala. Asala’s entrance did also bring with it fine stroke play with some towering sixes, but also some smart running as the two took the score to 74. However the resistance didn’t last with Paul holing out for 13 off 33 again, struck on the pads to become Tuluqdar’s second LBW victim. Asala reading the writing on the wall teed off to see if he could get the score past 100 but fell short and was caught for 20. Vicky, Tommy and Vivek all fell for ducks which in a way ended the painful innings quickly inside 20 overs.

Sadly there’s not too much to write about, some notable mentions this innings were Prashant’s 27 from 23 Asala’s 20 from 19 and Paul’s 13 from 33; the only three making it into double figures not including extras with 14 from 2. For the Wombats, it was a 5 wicket haul for Rony Tuluqdar 5-14 off six; the main destroyer and Yusry 2-32 off five.

So some serious reflection needed in the Shark batting order. One of the few positives from the batting innings was the run rate. Despite losing wickets, the runs did flow. However, it is far from where the Sharks wish to be. If we want to be a serious contender, the Sharks need to eradicate the constant loss of early wickets. There’s also some consolation that our inability to bat 40 overs hasn’t cost the Sharks too much thus far as their fabulous bowling attack has always done the job, however the day will come where batting will be required to stand up and bat for 40 overs.

In this encounter, the Wombats proved to be king of the monkey bars in the first schoolyard stoush with good batting, disciplined bowling and general team work. Sharks still sit second on the table and face Paddy Foley’s in seven days’ time.