History is punctuated with victories against the odds where outnumbered armies have overcome forces much greater in number. Such victories are recorded in folklore and the winning general is immortalized as a legend who will be remembered forever. However, for each of these rare feats of bravery there are a hundred other battles that follow the script, the army greater in number simply rolling over the top of their outnumbered foe. No one makes movies about these battles. Yes, yes, “300” and “Letters from Iwo Jima” I hear you protest. But to compare Gerard Butler’s Spartan army or Ken Watanabe’s stoic Japanese troops to the Paddy Foleys top order would be stretching things just a fraction.

And so it was on a glorious Saturday in May at the Sano International Cricket Ground that the Chiba Sharks 1st XI outlasted a spirited but ultimately outnumbered Paddy Foley’s. Don’t expect to see any feature films made about this one. Future historians will need to rely on this report alone as the sole documentation of events.

Leading 12 Sharks with a solid half hour warm up under their belts and chomping at the bit to get stuck into it, captain Bedingfield won the toss and decided to bat. Nine Paddys took the field with the promise that two more would arrive at an indefinite time in the future. But promises are like babies – easy to make, harder to deliver. Although Paddy Foleys’ personnel may have changed, their habit of leaving behind fallen soldiers at Roppongi nightspots the night before matches hasn’t.

The Sharks openers had yet to fire in the opening rounds so a reshuffle was in order. Bedingfield and Paul Grant opened up and set about exploiting the Shark numerical advantage with quick singles and the odd boundary. The captain fell in the 10th over with the score on 46 but a platform had been set. An unusually zen-like Prashant Kale joined PG at the crease and the two immediately looked comfortable against the Paddys change bowlers, knocking it round and taking ones and twos at will. At drinks the Sharks found themselves in unusual territory, still only one wicket down with the score approaching 100. The middle order were at a bit of loose end. At this point they would usually be diving into their kit bags in a panic and frenetically strapping on pads and gloves. Instead Asala was playing with his kids, Rubal was off somewhere studying a text book and young Marcus Thurgate was making himself as annoying as possi 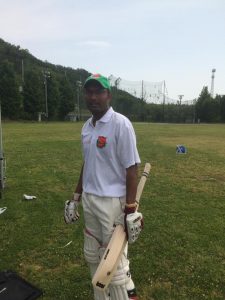 The consensus amongst the Sharks onlookers was that the two batsmen at the crease were destined for hundreds. Perhaps double hundreds. In fact, the way Kale was tapping balls over the mid-wicket boundary, why stop at 200? Well, lets not get ahead of ourselves. PG did just that when he contemplated a cheeky run on an overthrow only to be found short of his ground, a fine knock ending on 67. Kale, sensing that the Sharks media team were brandishing cameras at the ready, decided that a six over long on would be the most appropriate way to bring up the ton. It wasn’t quite to be but, as Prashant stated on the way off, caught on the fence for 99 is better than zero.

By this stage Sharks 1st XI debutant and Samoa Women’s captain Regina Lili’i was putting on a demonstration on late-over one-day batting, and in the process making everyone else look bad. Placing balls into gaps and running two and threes? Surely this is in breach of the JCL playing conditions. Someone contact the committee!

Lili’i finished on a run a ball 25 while a couple of useful contributions from Yosuke Higashimoto (16) and Asala (six and out) helped the Sharks to a very competitive 8/257, Paddy’s captain Kamran helping himself to three wickets in the final over.

Needing six and a half an over, Paddys sent out their big guns, Ali Raza and ex-Shark Ashiq Hussain. Raza showed poise, technique and power while Ashiq swung his bat somewhat less gracefully. The two made a strangely effective combination and although Vivek Singh threatened to go through both of them on several occasions with his fast in-duckers, they somehow survived; the pace of Matsumura, Higashimoto and Grant unable to stem flow of runs. They were aided by Tsuyoshi Takada somehow managing to drop three catches in the space of five overs but the young off-spinner managed to redeem himself by picking up the wicket of Ashiq. But at 1/110 at drinks Paddys were in an ideal position to do the unthinkable and create an upset for the ages.

Captain Bedingfield decided to explore his bowling depth a little further and threw the ball to Lili’i. The Samoa captain immediately found a length and the runs began to dry up. With the run rate required creeping up Raza sensed that attack was the only option but was well caught on the mid off fence by Higashimoto. An over later Lili’i had her second wicket catching the dangerous Naseem off her own bowling. Her spell of five overs, 2/22 was certainly the turning point in the battle.

The floodgates began to open and Takada proceeded to cash in, ripping his off breaks through the Paddys middle order to finish with four wickets. He had Kale to thank for one, a tough catch taken about two inches inside the mid wicket rope finishing a great day for the former Japan international. Yes, literally. Nothing more left for me to achieve today. I’ll just casually waltz off and let the sub fielder run around for the last few overs.

The sting had well and truly gone out of the game by this point and Rui Matsumura teamed up with Rubal to clean up the tail, Asala finishing a solid game with three catches. The Sharks trudged off 64 run winners. Paddys, whose numbers seemed to have dwindled even further by the conclusion of the match, were left to rue their what could have been. 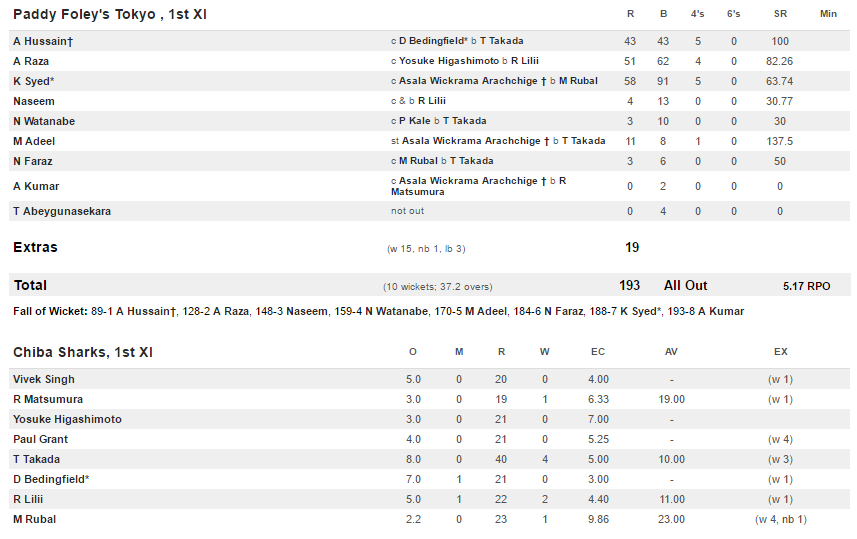 The win puts the Sharks back to equal first on the table. The next battle will be against the improving Tigers, fresh off a win against the Wombats. There will be no numerical advantage for this one. The Sharks will need to be on their game.