The little supermarket near the new Sanbu-no-Mori Cricket Ground is called 緑の風 (Midori-no-Kaze, or Green Wind). (Short walk and all your needs for the day, inc. 10kg bags of local genmai for \3,800). Green wind also just about sums up the first official JCL game played at Sanmu and our Japan Cup campaign opener against newbie, Men In Blue (M.I.B).

The opening game of MyYs vs Indian Tigers never eventuated with Tigers pulling out with weather concerns. They probably called right as the rain and wind started almost immediately the pitch was set up. Nevertheless, Dhugal, with eager Shark help, got the MyYs into a long centre-wicket practice. We then watched as wave after wave of light, but insistent rain was driven across the field and most of us honestly thought that was it. But, on cue, the rain backed off, the wind found yet another leg and a growing collection of tumbling foliage to dry things out, and with only the loss of 3 overs it was game on!

All through the match dark, grim clouds marched past to the left and right but we had low scooting cloud and bursts of sunlight. The incredible wind was a constant, scattering boundary ropes, cones, branches, Shark caps and little girls from Kansas across the field. M.I.B won the toss and elected to send us in and chase. They were to rue that. 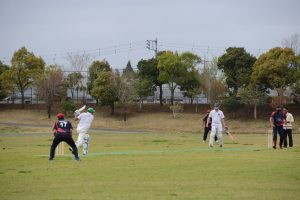 Dhugal and Marcus – like master and apprentice – sauntered out. Dhugal immediately tucked one to leg.
Marcus, perhaps not yet attuned to senior level, got off a bit late and failure to ground his bat saw him given run out without facing a ball. 1-0. Bat abuse astutely avoided, lesson learned. He will live to bat another day.

This brought the dangerous and debonair Vivek out to join Dhugal. Green Wind, with a dash of red alright. Viv’s first two optimistic swipes looked like he hadn’t seen a bat in a while. His third showed he certainly saw the ball, which departed in a beautiful arc over the bowler and rope. Sanmu has big boundaries when they stay still. Viv’s 22-ball 42 matched the elements. He launched 2 sixes and 5 fours – straight, clips off toes, over square. Gayle-like into gale-like. We hit 50 in 5 overs with Dhugal on 3 off 5 balls! Tornado Viv was eventually out hitting over the top of one. 2-53.

Enter Sankar. Eye in, Dhugal took over. 4s were stylishly crashed through mid-off and other compass points, a towering 6 went over square. Great running and calling by Sankar and Dhugal capitalized on some sloppy fieldwork and they pushed up to 92 before a big dipping in-swinger castled Sankar (scoreboard numbers belie his contribution).

We welcomed back vet and Western District larrikin, Nick Creece, who roller-skated himself to 10 while Dhugal continued his way through the batting gears. 4-129. Shark debutant at 60yrs, Terry Cooney, knocked it about for 3 and needed all his soccer-toned legs to keep up with Dhugal. 5-142. A mini-collapse in search of runs saw Muneeb, Chris T and Mairaj quickly on their way. Kavin knocked one off one. Dhugal, after a sedate start, was 85 not out off 49 balls (7 dots only and peeled off 44146 at the end). The captain in is a good place. Chiba Sharks also, with a chunky 166-8 off 17 overs.

The Sharks were in no mood for complacency and set about the task of defending their 166 by throwing the new ball to big Viv, who immediately made a mockery of the slippery pitch conditions by running in and hooping the ball at pace. Chris Thurgate, denied the gloves by his eldest son Marcus, won a staring contest with Nick Creece and strode straight to second slip where he proceeded to drop a thick edge second ball of the innings, a chance he would normally gobble up without a second thought. As luck would have it he was given a second, much harder opportunity three balls later, which he took very nonchalantly.

The Sharks were on their way. 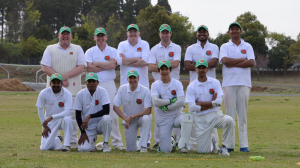 The Men In Blue were determined to make a game of it, however, Bisht and Kapil attacking the power play with gusto. Muneeb and Kavin took the brunt of the onslaught, in the process receiving a free lesson on what lines and lengths (not) to bowl in the power play.

At 1-61 it was time to take the pace off the ball and introduce the cunning old (and hung-over) fox, Kris Bayne. The wily veteran had a determined look in his eye and began dropping it on a length from ball one. The stiff breeze aiding drift and dip, Bayne picked up his first wicket by going straight through the dangerous Kapil. He was denied a rare wicket maiden by a wide but what followed was off-spin carnage.

The next one he picked up by luring a false shot to boundary sweeper Kavin, who galloped across the outfield to make a tough chance look extremely simple. A ball later went through the gate again and the K-Binator was on a hat-rick. Three in three balls didn’t quite materialize, but the following over a quick piece of glove work by Thurgate Junior gave him his fourth. Finally, in his last over, he clean bowled a third batsman and let out an almighty roar, it was apparent to everyone at the ground that Kris Bayne had indeed taken a five-for. In truth, if it weren’t for a dropped catch and another coat of varnish on the off stump he could have had six or seven. 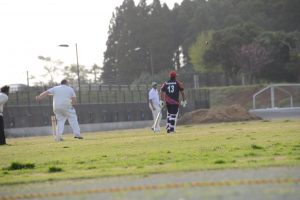 It should be mentioned that in between the midorexic chaos, Muneeb picked up his first wicket for the Sharks in a much-improved second spell. The highly rated youngster will surely claim many more in his Sharks career.

Self-styled Instagram heart-throb, Vivek Singh, was then brought back on to clean up the tail, finishing with the impressive figures of 3/19 off his four overs to go with his 42 off the bat. There is more to this young man than Brylcreem and billion-lakh rupee smiles – he’s quickly turning into one of the most dangerous all-rounders in Japan. By the final over the sting had gone out of the contest and there was just enough time left for Thurgate the Elder to bowl his first and last over of the season, while Nick Creece decided to show everyone up by hurtling throws in from the boundary just above the bails. The M.I.B. tail-enders showed good fight to draw the game out and finish unbeaten on 118/9 but it was the Sharks’ day in the end.

It was one of those games where it looked like a few dominated. That was not the case. Everyone did something in the field to get the win. The pressure was always on. Nothing much got past Sankar. Mairaj pulled off some great stops at mid-off. Marcus, a chip off the old block, was very sharp behind the stumps. The old block himself, at slip, savouring his MyYs, took his first non-oven-mitted catch, head-high, in a while to get the first wicket. Terry chased like a 16-yr old. Kav is a 16-yr old and took a huge skier on the boundary rope. He bowled really well in a tricky wind, too. Muneeb was unlucky to just get the one wicket. All in all, a great team effort in a day that felt like life in a washing machine cycle. In fact, mid-match, it was announced over the neighbourhood loudspeakers that it was unsafe to be outside and residents should stay indoors… M.I.B would understand.

Thanks to our own Sumon and Nihar Amin from Rising Stars C.C for umpiring and making an inspired and educated call on the weather, and Yumi for the coffees and support! The win leaves the Sharks unbeaten in all formats and divisions this season as another double-header approaches. The Sharks play the winless Wyverns in JCL Division 1 on Saturday before taking on another new team, Tsukuba, in the Japan Cup at Sanmu on Sunday.