Only one team beat the Twos in 2015 – that was the Tigers, new to the JCL and required to enter via Division 2. In both losses we had them in a fairly sorry state until we ran out of wickets, either taking or giving. The 2016 version of the Tigers has two teams, though there is quite ‘liberal’ rotation between the two striped teams. Sharks, on the other hand, always attempt to represent our whole membership. The Sharks going up against the Tigers were a classic 2nds! Local and imported; East and West; old hands (and we do mean old) and young ‘green’ goers; the street-wise and the sparkly-eyed; the internationally-capped and the knee-capped; and it included two more she-Sharks for the season! Talk about demographics! Maybe they would even march to this tune, singing as they go:

Mr. Thurgate’s northern bound, there’s miles to be done.
We play the game and win or lose
He’ll enjoy his Bundy Rum!
‘So who do you think you are kidding, Mr. Tiger,
If you think our time has come?
Warmed up and enthused, Chris traditionally and habitually lost the toss to be sent into the field. Caps were presenting to our debutants Kurumi Ota, Madoka Shiraishi and Krishna Bahtia. Great to see two more My-Ys working up through the ranks and Japan Women’s opening bowler, Kurumi, opting to join us!

Bowling
Who else to throw the new ball to but Kurumi, who showed no nerves at all with an impeccable line! Her first spell went for just 9 (4 overs) and included a maiden and the first wicket of the game and her Shark career. Limo, parked at a fairly short mid-over got absolutely all of a screaming drive! PG would have had his crayons out, and the batsman certainly was! 1-5. Limo also shared the new ball and kept the Tigers honest with 0-18 off 4. The Tigers took their time but easily found tap and run singles, with wides again plaguing us.

First change saw Takuma and Mairaj take up the challenge. Young Yamashita improves each outing. He caused major trouble and was unlucky not to bag more than his one Tiger. Mairaj started off well, but a devastating loss of line and concentration saw him vanquished for the day, with Krishna Bhatia trundling in for his first bowl as a Shark. It was great to see these former-My-Y lads turn the screws on! They both got bounce, they beat the edge, got inside edges, had catches just eluding point and other fielders. A very, very confident shout for stumped went unrewarded. They both went for only 16 off their first six overs. Takuma eventually broke the significant first wicket partnership when a high, frustrated hoick landed in Sayeed’s safe hands at long on. 2-96 at around drinks. 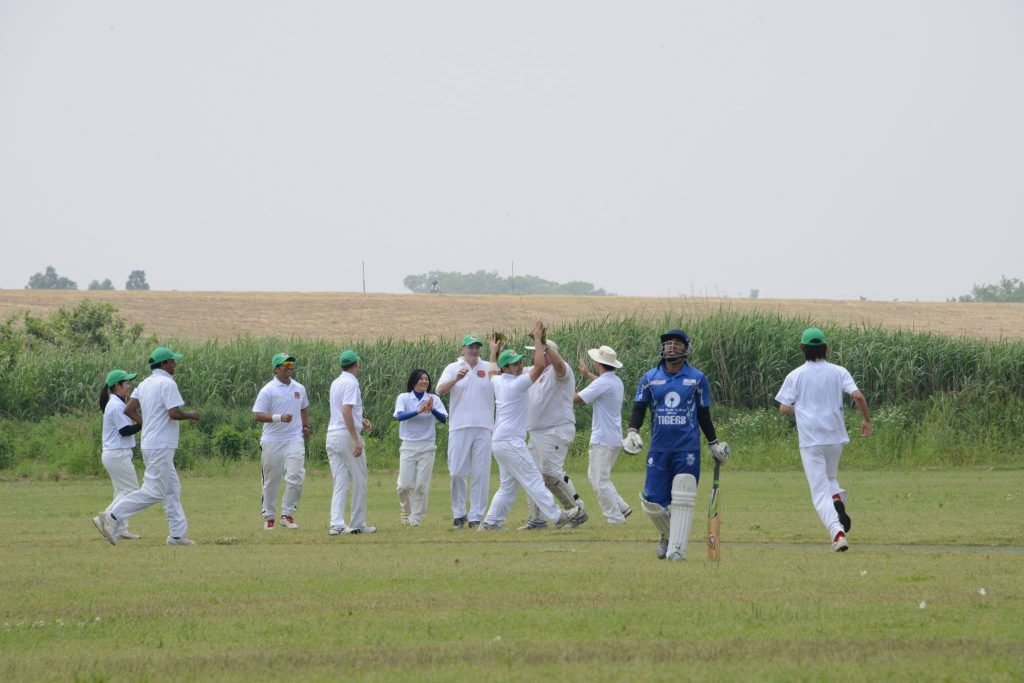 The spin (sic) continued with the injection of KB into the attack, him taking over from Takuma. The Kris-Krishna combo could not penetrate but neither did runs flow. The next wicket, Krishna’s first, was monumental. The pressure got too much for the batsman who got under one and powered it out to the deep long-off rope. Yu Hamamichi, stationed at long-on, took off, skating the rope line like a maniac tightrope walker to take the catch, outstretched and overhead, at full pace while remaining in the field of play. Great bowling stint deserved an exceptional wicket.

All augers well for Shark future spin stocks (throw in Kavin), but there is also still flavor in old bones! KB had been threatening and in the over before next drinks ripped inside between bat and pad. Despair that the ball somehow missed off stump turned to delight as CT didn’t, and a Tiger was on his way. Drinks taken and then he made it two when sub Rui accepted the first of two catches at point for a long double-wicket maiden. 5-165.

Spreading the ball around, Sayeed, the fastest straight-ball spinner in the West, and Yu got a crack at the 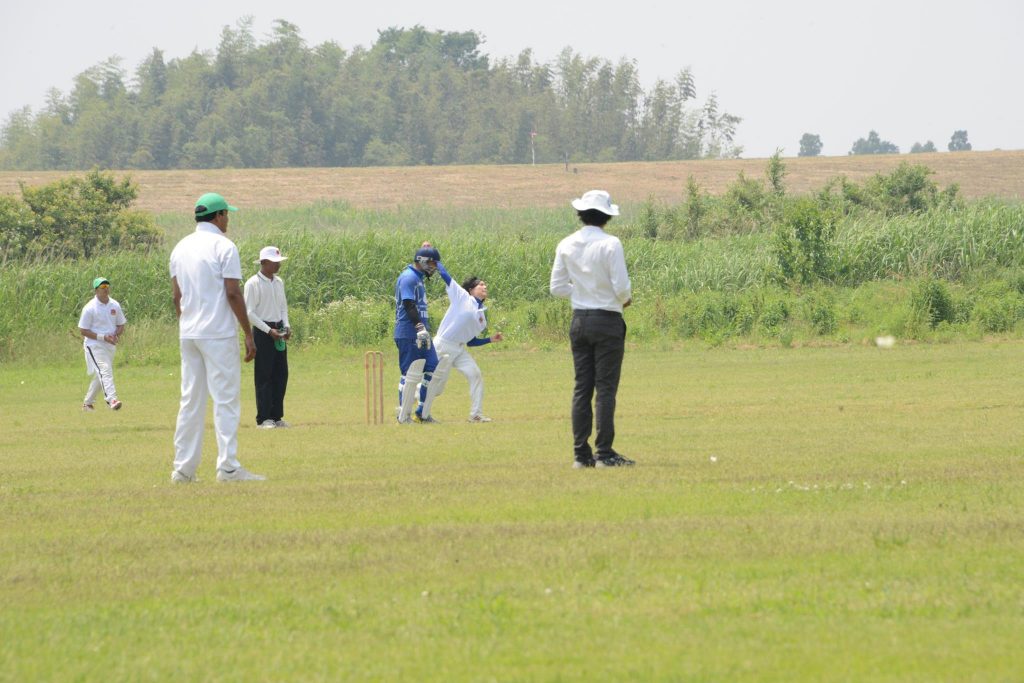 Tiger underbelly. Rust or nerves or the curvature of the Earth saw the wides, some with topping, creep up and the total creep along with minimal effort from the Tigers. We were entertained and exasperated in equal measure. It was like Virat Kohli was in the house, minus his talent.

The return of Kurumi removed the irritant as Rui grasped another at point. And point must be made that Terry at point, before a rest, had balls go just left, go just right and tantalizing go over (twice). Very frustrating for him and indicative of the luck we had all day in the ‘V’ between ‘keeper and point. 6-184.

A major obstacle was opener A. Kumar who had scored steadily though as if in molasses. The arrival of Prashant GV at No. 8 seemed to set him off and the two experienced players took the game away from us after what had been an excellent if unrewarded effort. All latter over bowlers took a bit of a battering, except for Krishna. He incredibly did not bowl a wide in his 8 overs and constantly threatened. Some poetic justice and ‘girl power’ stepped in as Kurumi took her third wicket on debut, Madoka taking a well-hit drive overhead to deny Kumar a 100. And also fittingly, Krishna got another when Kurumi finished off a fine effort in the field with a catch.

We held most of our catches, two blinders, but put down two easy ones. We were cruelled by many, many close misses. Everyone chased and the catching arch behind the wicket (in excess of 150 yrs) really enjoyed the youth on display around the field. Terry was airborne much of the time. Yu, Sayeed and Takuma prowled the outer areas. Mairaj was solid at square. Limo, Madoka and Kuruma pull off some great saves. Chris had his already sore back mightily tested but was his usual slick self. If catches were ill-health KB will live forever. Krishna is on a learning curve.

Batting
Not much to write about, I’m afraid. KB and Limo set off to the middle. KB looked quite comfortable until playing back and to square, a ball collected him ‘northish’ of the ‘box’. The first animated and highly kinesic, mobile chorus of many was enough to get the PF finger skyward, closely followed by KB’s blood pressure. Limo, with an ill-timed drive soon followed. 2-4.

Sayeed and Mairaj set about, well, the bowling. Sayeed, 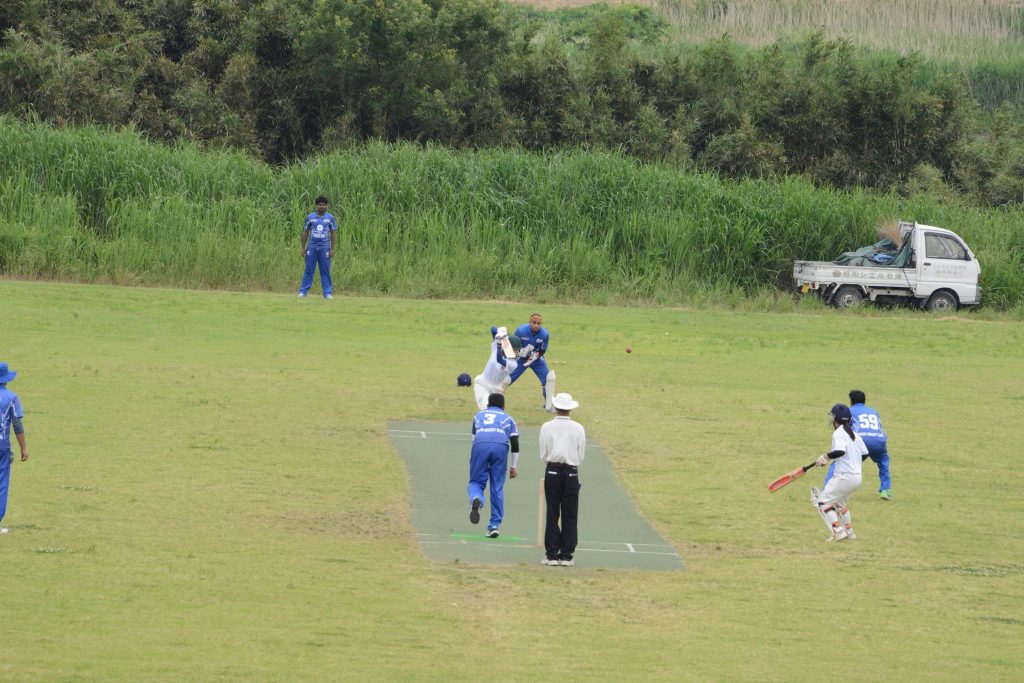 enjoying his new GM bat, threw it with great effect to punctuate stout defence with attack around the ground. Mairaj tapped it round and they ran well. Mairaj was caught for 8 after the pair had added 30. Terry, as he has already showed, soaked up the pressure and added another nice cherry to his GM blade before being castled. 4-51.

Sayeed continued to blaze away at the hip before losing his stumps at 36. Kurumi joined Madoka. This must have unsettled the Tigers somewhat as sweaty palm must MUST be the only reason for dragging a few balls down short… I can appreciate Madoka, all of 150cm, scaring the sense out of them. She and Kurumi did not bat an eyelid, and in fact Madoka battered a deliver over square for 4. Unfortunately they departed in succession to have us 7-88, which became 8-88 with Yu’s removal. Takuma provided some support for CT. The latter popped one into the undergrowth for 6 (but resisted the premature commentary-cum-proclamation of “Lost ball!!!”). Krishna got his first Shark run and CT remained not out on 10.

We bowled really well in long spells. We fielded okay. We were quite unlucky in many respects in the field. We batted poorly – period.

Still, Sharks 2nds are in it for the fun and fun is what we have. Great debuts by Kurumi and Krishna and Madoka. The Sharks-Tiger dance continues this Sunday as the 1st XI rides out in vengeance.