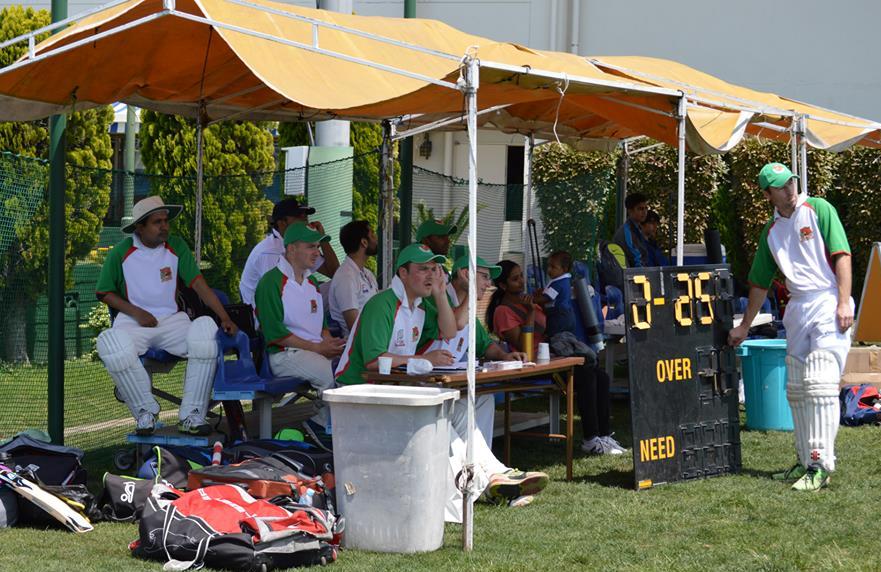 A sublime all-round effort today had us successfully take the first step on the road to the Japan Cup finals. With only four batsmen needed, wickets taken by six bowlers and two run-outs it was great day with willow and leather by the Chiba Sharks. It was only a week ago that the same team got their noses past our 2nd Xix, but it was a largely new-look Sharks and definitely a new-look scorebook.

It is heartening to know that there was still some serious talent missing but the team of Dhugal (c), Dave, Karthik, Sankar, Aditya, Mairaj, Anton, Paul, Hassan, Vivek and KB, got the job done, continuing the great enthusiasm and team play that we have seen so far this season. As Dhugal commented, “Great vibes!”.

It is always nice to come to YC&AC and we had warm conditions today. Dhugal got us going when the Tigers emerged late from Golden Week traffic by winning the toss and electing to bat. He suggested 140 was a good number on a pitch that would keep lowish. 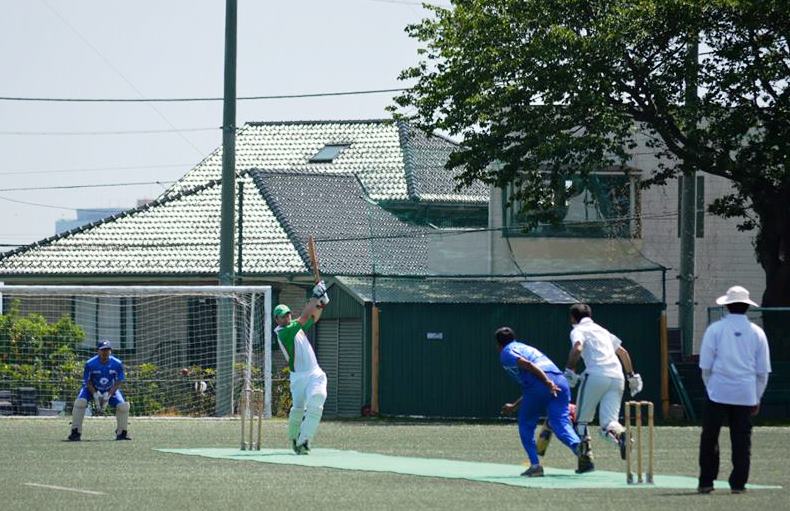 Dave loves YC&AC. I am sure somewhere, maybe on the old baseball scoreboard, a carved heart encases that endearment. So when an objective-steeled Karthik (“hit straight through the ball”) strode to the centre with the Ginger Typhoon the rest of the boys settled back to enjoy. They pushed some singles before Karthik “hit straight through the ball” over mid-on. It sounded sweet. Dave meanwhile worked into his mood with some deft touches. Karthik loves the sound of first boundary so much be went one (actually 2) better with the same shot high into the nets for 6! Dave, warmed up, added a boundary of his own square to which Karthik replied with a thumping shot to the playground corner. He felled bowled to a shot he might reconsider thus. 1-36.

Enter Dhugal. After failing to run Dave out first ball he settling in with a string of well-placed ones while Dave rekindled his love affair with YC&CA, smacking a loving drive past the bowler to the pool end and biffing one through covers for good measure. In between, good running by the two had the field and scorers working overtime. Dhugal then cut loose with classic back to back 4s and Dave soon replied in kind. It looked like another musky and muscular session was on but Dave just did not get on to one and was well caught for 32. 2-79. 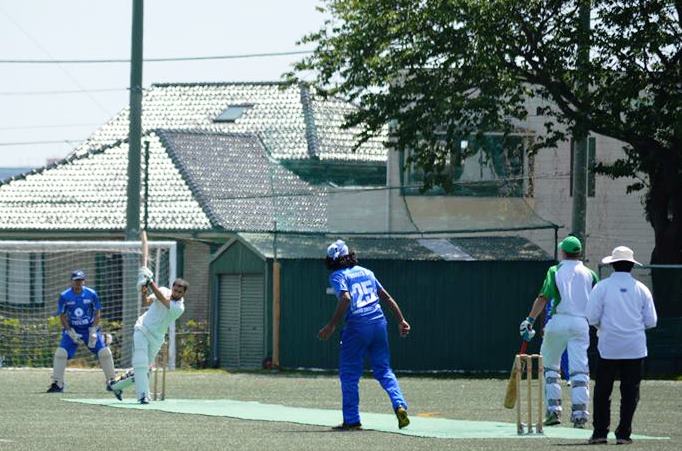 Hassan was itching to get into the action and joined Dhugal (on 18). Both these guys know how to build and innings and Tigers got no respite, or wickets for that matter. They pair hared between wickets for ones and pierced the field with spaced out, with Tahir actually outscoring Dhugal for a while. As we approached the end of our 20 overs, however, Dhugal put the foot down with 17-run over including two 4s and a six. He past his half-century and the unbroken partnership of 69 took us to 2-148 off 20 overs.

Karthik found his range well after two unfulfilling digs this season. Dave’s innings was more a kiss and a cuddle compared to his usual hot and heavy YC&AC dry humping. Dhugal’s was a perfectly measured innings of consolidation then power. And Tahir just scraps and fights for every run! Great contrast to get us a good total.

Bowling
In this confrontation with the Tigers we had bowlers bursting out of our line up. Adit, Viv, Hassan, Dave, Dhugal all top-drawer. Sankar owns a 6-fer this season. Mairaj, Anton and KB can have their moments. Then there is Paul. The Beatle’s Bungalow Bill needed his elephant and gun (and his Mum) to go tiger hunting – all Paul Grant needs is a 156g red leather sphere. And a run up. He is the stuff of Tiger nightmares. And he obviously enjoys it (eternally damning the Tigers to No. 9 on the ladder – Paul will understand). Today he followed up his recent 5-fer with four overs of hostile pace and movement, giving Karthik a fine little edge to remove the opener first over. 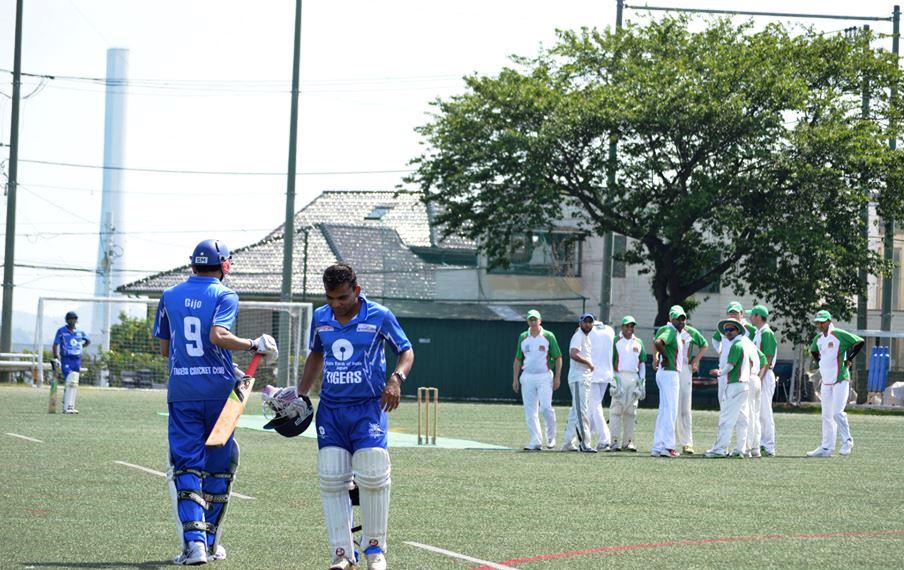 1-3 became 2-3 as Adit ‘The Removalist’ took care of No. 3’s furniture in a wicket-maiden followed by another maiden. Both Paul and Adit proved very hard to hit! When they occasionally did a few thick ones eluded the cordon. Having enough of this Paul put the groping No. 4 out of his misery by uprooting his stumps. 3-7 after six overs of incisive, unforgiving fast bowling.

The remaining opener took a few liberties with a pair of 4s off Adit, but the Shark attack is hunting as a pack this year. Pressure at one end, wickets at the other, or both. Next up, Vivek, took a couple of sighters before landing another one of ‘those balls’ – fast, pitched up on a perfect spot and taking the top of off. Not as aesthetically pleasing as the ‘Wombat ball’ but another cracker! 4-26. Dhugal kept an over each by Paul (3-0-6-2) and Viv for later and decided to let the more sedate trundlers loose.

Sankar got a couple to defy the batsman’s edge before Anton got into the wickets column. ALW landed the ball right on the money thus tempting the batsman desperate for runs out of his crease. ‘Keeper for the day Karthik removed to bails will glee! 5-37. 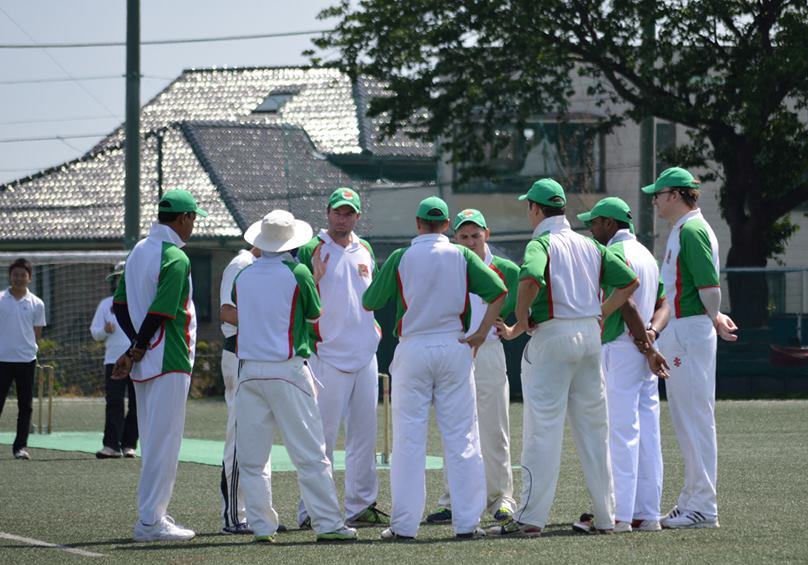 So far all wickets involved only ‘keeper and/or bowler, but the support and the pressure by the field was also tremendous. YC&AC is tiny but Sharks were chasing down balls within millimetres of the fence to keep 4s to in many cases 1s. Dave, Hassan, Viv, Adit all made great efforts in the ‘deep’, Mairaj was prowling, but a good example of the Shark commitment was a combo-play by Anton, who chased down a ball in the deep, slid and knocked it back to KB, who, hot on his heels, delivered back to the ‘keeper. The creaking was audible; the intent laudable.

The field not only saved runs – they took wickets with back-to-back run-outs. Anton’s bowling pressure saw a ball punched toward mid on. There waited Dhugal who gathered, steadied and with his best Mark Waugh impersonation threw down the bowler end stumps side on! Brilliant stuff! 6-39. A Mairaj over was taken to for some runs – he was unlucky that a catch to deep square was short – but they needed runs badly. Soon enough a ball was tucked down to a waiting Vivek at backward square. He collected on the run and shot it back over the stumps to Karthik (having a very good day in the ‘keeper gloves!). 7-59.

We have been here before with the Tigers…, recently. The sense of de ja vu got stronger as Dhugal called in KB to have a bowl. We won’t mention the previous three balls he bowled to Tigers… Again a tidy enough start, with a health catchable edge through vacant first slip. KB’s second over brought him some trepidation but also redemption. The advancing batsman was beaten and Karthik smartly whipped off the bails for the stumping – what a great day he had! KB blotted his copybook a bit but rallied to catch the batsman’s pads in front. At the other end, Hassan got his chance to tease some Tigers. They must have thought, ‘where were all these quick blokes coming from??’. Failing to find anything but air outside the lunging bat, Hassan searched for wood of a different kind and ten-pin bowled the batsman. Tigers all out 78 in 18 overs.

It was yet another fantastic effort by the Sharks. Up for it right from the start and we maintained the pressure to the end. Our best T20 start with all four bats getting runs at around a run a ball or better. Bowler after bowler stepped up but it helps when the top order is shot out cheaply. Great energy and support in the field. There were many good individual efforts, especially Karthik taking up the gloves for a catch, two stumpings and a run-out involvement as well as opening.

Thanks to Indian Tigers for two games in a week! Thank you umpires from Aoyama Gakuin who did a great job! KB and Sankar umpired the next game, it being Sankar’s debut as an umpire in Japan. The Chiba Sharks cricketing machine rolls on!

Next stop is 1st XI against Paddy Foley’s and there are a lot of hands up for this game. There is some ‘history’ between us (well, the recent PF version and everybody in fact). They are the reigning JCA Titleholders and it will a hot game. If you can’t play, get up to the game and watch!