Sharks 1st XI did not have a good August, losing all three games played in that month. We slipped to a 5-5 record and gave the Wombats bragging rights by finishing below them at 3rd on the ladder. We clearly have issues with our top three, whoever they are on a given match day. Out of 10 completed innings in the regular season 7 times we have failed to make it past 50 with 8 wickets intact. The innings otherwise were early in the season when a bloke named Lollback was about. If we are to make an impact in the finals we are going to have to pull our socks up and put our heads down.

In our last game of the season before finals we took on MAX. We were an interesting mix that included a number players out of the Uenomiya Cricket Factory in Osaka – a sign of the future. We were: Dhugal (capt), Sankar, Sumon, Takady, Prashant, Asala, Yosuke, Vicky, ‘Rhino’ Tomizawa, Viv and Sawaguchi. Here is how Asala saw the game. 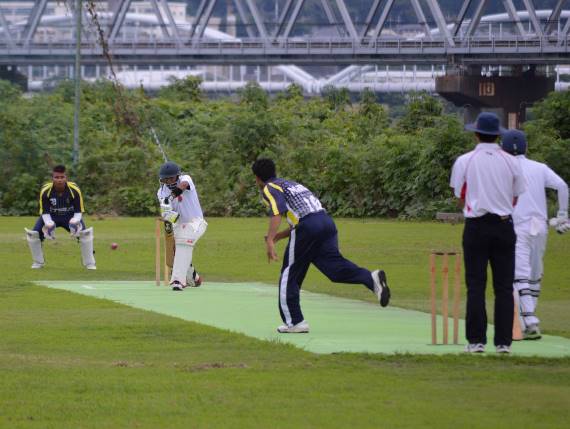 Batting
The day began with good weather, but it soon started raining when the match commenced. Our brave Sharks, Sankar and Sumon, opened the innings. They faced some tight bowling. First to fall was Sankar for a rare failure for the season, out caught by Obata in the third over and Sharks were 6/1.

Sumon was joined by Dhugal and they started to build up their partnership. Sumon decided to take the long handle, stroking three beautiful boundaries but unfortunately was bowled by Singh. Their partnership ended with 29 runs. Sharks 35/2. Enter Takady but exit Dhugal after another 4 runs. Three gone for under 50, again.

At the fall of Dhoogs, Prashant came to pitch and swatted three awesome boundaries and one six on the leg side. Meanwhile Takady made a beautiful statement with an off drive six and a boundary to the on side. In defense he was his usual calm and confident self, playing the bowlers straight through his long innings. Prashant was sadly out for 27 runs, bowled, probably very unhappily, by Hanif. 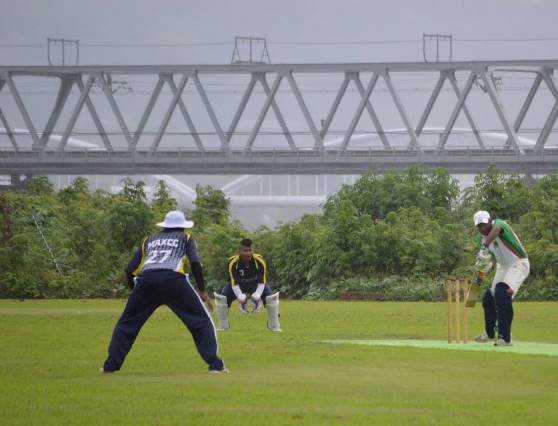 Next Asala came in and made one boundary with his favorite shot, sweeping on the leg side. Then he made an off drive but unfortunately it hit the edge of the bat and was caught by short third man. Vicky brought his firepower to the wicket and pumped two boundaries by jumping out of the crease and crashing straight drives.

With Takady anchored at one end a revival was possible but Vicky fell on 16. Yosuke, Rhino Tomizawa and Viv then fell cheaply and too quickly. Takady batted well but eventually ran out of partners and was probably annoyed and to be bowled by Hagiwara just short of a fifty. Sawaguchi was not out and Sharks were bowled out in 35 overs for a very under-par 178 runs. 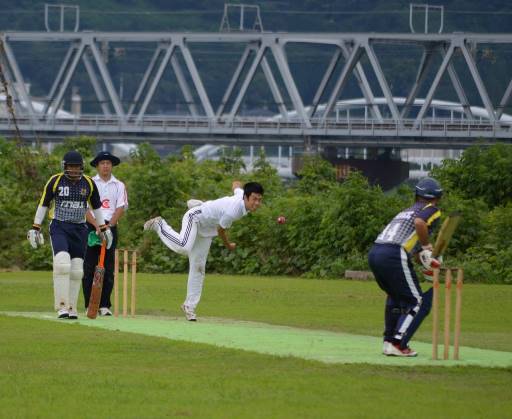 The rain stopped and the weather conditions were good for Max to bat and for Sharks to field. Two young guns, Viv and Yosuke Higashimoto, started the innings and the Sharks were on top with Max’s first wicket falling on 9, off Higashimoto, caught by Rhino. Yosuke was on fire and he took the Max’s second wicket, Hanif, with a catch from Sankar. 14/2.

However, Singh in the middle order steadied with opener Kobayashi and it took us a bit longer (and 125 runs…) to get Max’s 3rd wicket. However, the Sharks never gave up. We fought back hard and Tomizawa took the important third wicket of Singh with Max on 139, Vicky holding one.

Unfortunately we then dropped several catches, among them some pretty hard ones, and Kobayashi took full advantage of the let-offs. After that Takady came in action we finally took the 4th wicket with a ‘selfie’ by Takady. Max on 173 for 4.

MAX were now only 6 runs short, however, with plenty of wickets. The Sharks were fighting very hard at this point to stop Max getting more runs. We did it before; could we do it again? Sharks were on the ball and took Max’s 5th wicket, Dhugal returning to Asala for a run out. 173/5.

One partnership stood between us and a win. But, we failed to make a decent score and things might have been different if Takady had more late order support, not to mention the upper order. With the ball it was a rare day that saw Viv AND Vicky go wicketless (they recently took 7 for stuff-all in two overs, which proves, ‘cricket is a funny game’).

We can do better with both bat and ball. Next up, once the Sano grounds reappear after the deluge, we go fin to paw with our old friends the Tokyo Wombats. The two games against them this season could not have been more of a contrast even though we triumphed both times. Already the hands up for this game is a testament to our depth, commitment and enthusiasm. After years of having our colours lowered wouldn’t it be nice to hoist another Wombat pelt this year to take us to the JCL 1 Final? Not a question really. We will.