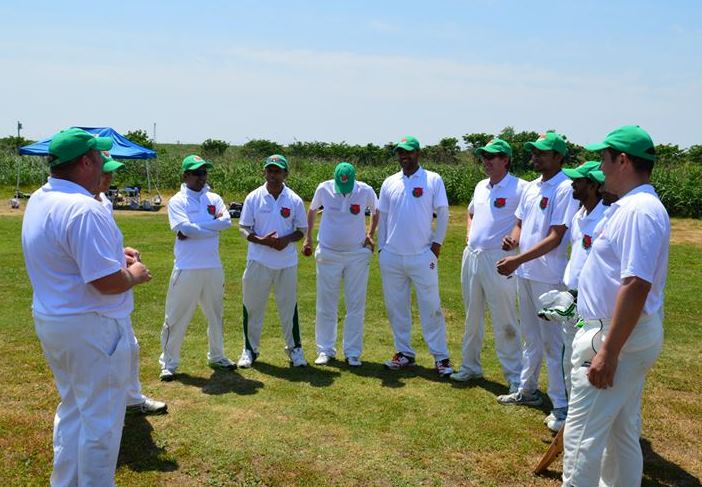 Everyone turned up about 40 minutes early on a ripper of a day at Tatebayashi Station. It was already 29 degrees at 9:30. No one was really sure what to do with the free time, so we sharked around and got our new shirts and sort of chilled for a bit.

We arrived at our spiritual home ground, Sano One, site of our JCA Championship win, and did some very Sunday morning-ish warmups. Chris tossed, won and sent the quite raw Wyverns in with the view that we could control the game better. This turned out to be a stroke of genius as we wrapped the game up at about three o’clock.

Bowling
Vivek and Mairaj opened up in blustery, but comfortable conditions. The Wyvern openers were cautious as the ball was swinging around and the bowlers were tidy. Mairaj spiced things up a bit and bowled two bouncers in a row, one of which gently bounced off the helmeted scone of the surprised batsmen. One fielder commented that he was beaten by a complete lack of pace!! 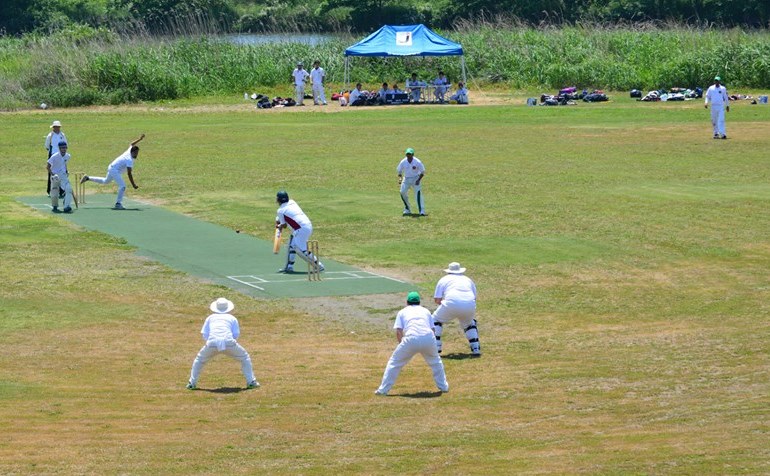 Vivek finally broke through with a jaffa (Australian for a great ball – http://en.wiktionary.org/wiki/jaffa) and Wyverns were 1-20. The score steadily ticked along, however, and while the batters were cautious, they punished the bad balls to the short boundaries. They were going at about 4 an over. Sankar came on and continued the tight lines, he was rewarded with a wicket soon after when the batter was adjudged to be plumb LBW. 2-52 was the score and some cracks were beginning to show in the line up. We were fielding well and the pressure for runs was building.

Anton came on and the most interesting dismissal of the game occurred. He confused the batter – she seemed to be in two minds whether to hit it for four or six – and she popped the ball up for a ‘simple’ return catch. Anton, however, was concerned about the location of the umpire, the non-striker, rowers and anyone else in the local Sano area. Avoiding several unseen, non-existent obstacles, in the end he stuck up a periscopic arm and the ball stuck in his outstretched hand. A pearler of a grab!! 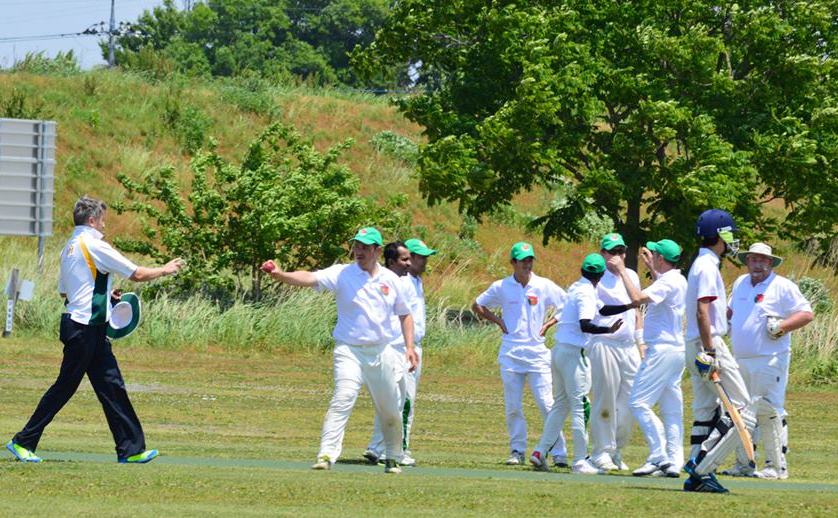 Next over, KB’s first at the Boat Launch End, Murad spectacularly ran out Tomita, who had doggedly held the innings together. He collected a firmly-struck ball at deepish long on, unloaded and flattened the stumps at the bowler’s end, middle peg. The wheels then looked like they would fall off altogether and they surely did as Wyverns slumped very rapidly to 7-91. KB was the chief destroyer and Murad also bowled well without luck. The dangerous Yoshi was tired down for the most part. The tail hung around for 40 runs and most of the Sharks had a bowl. KB, now at the Commentary Hill End, and Sumon eventually cleaned them up and after just 33 overs we were set a target of 138. 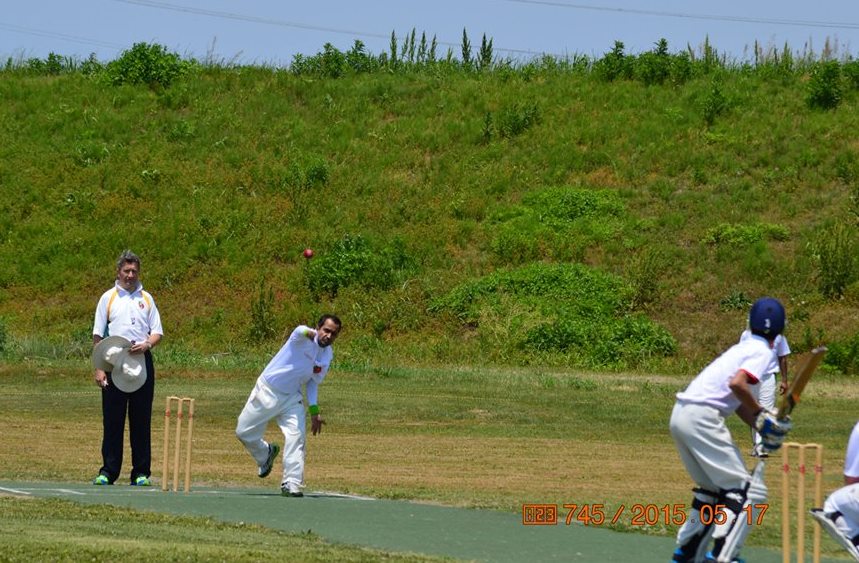 KB rolled back the sundial and was the pick of the bowlers with an exceptional spell of cunning and guile that netted him 4-14 of 7.2 overs. Vivek, Murad, Sumon, Anton and Sankar all finished with one wicket. Mairaj was entertaining and unpredictable. Nazrul mixed it up in his one over. Everyone had a crack and gave it their best with the ball and in the field. Anton’s ‘extroverted selfie’ catch has already been described but all others were of note:
Chris charged from behind the stumps like an offended rhino into short cover to take a skied ball that was in grave danger of going to waste;
Marcus at short mid off got very low and took a beauty centimetres off the grass;
Murad was absolutely copy-book in positioning himself and holding one at long on;
Vivek and Sayeed deserve special mention for their fine catches in the face of a very swirling wind and other incoming fielders.

Most of us were ready for a feed and a rest, but we had 35 minutes to maneuver until the lunch break.

Murad and Sankar were sent out with the 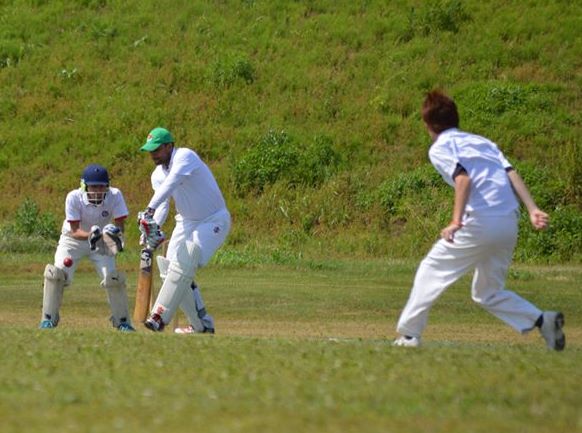 instructions to just get your eye in, push it around and be there at lunch. Murad very nearly fell first ball he faced, but after that it was total Sharks dominance. Sankar was given 7 gentle full tosses outside off in the first two overs that he helped to the same bushes at the long off boundary with some luscious stroke making. Murad was pulling anything short to the fence and we were off to a flyer at 0-45 off 5 overs. There was no hint of the batters slowing down as the bowling was pretty ordinary and the boundaries asking to be hit. Murad fell for 19 off 24 just 2 overs before the luncheon break and we went to lunch in a commanding position at 1-69 off only 8 overs with Sankar on 37 off 20 and Sayeed on 2 off 6. Lunch was taken with much style!

After the break Sankar continued on his merry way and brought up his maiden Shark 50 with another drive through mid-off to cover. Any wildlife in the area has wisely left. He looked set to be there at the end. Sayeed was unusually reserved but delicate, and was only 7 off 15 balls. Unfortunately Sankar then went for one shot too many and was stumped for a superb 70 off 38 balls that included 14 fours and 1 six. His wagon wheel would look more like a Roman Candle firework as he peppered the same five-metre stretch of boundary to the left of the crab apple tree. 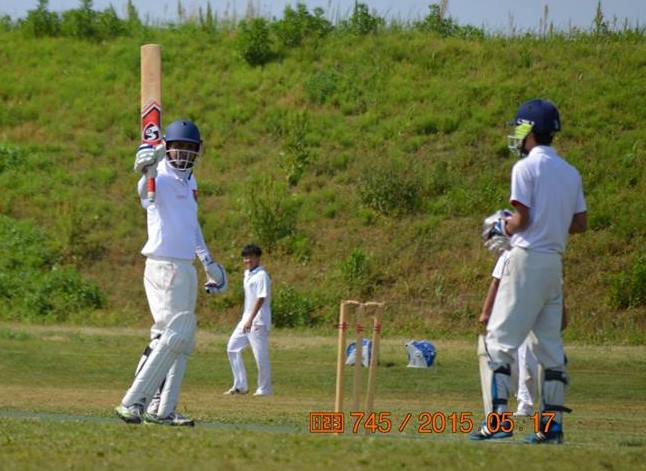 Nazrul, his first Shark game for some time, went to the wicket with the score at 2-112, but he was hardly needed. Sayeed saw Sankar’s dismissal as a sign for him to get moving, or maybe he just wanted to get back into his stylish new car and drive home. Either way, he went bang, bang, bang and hit 3 sixes and the game was almost done. He tried to finish it with another six, surviving a very very close stumping, but the next ball slid down the leg side and the wide signaled the end of the game after only 16 overs with Sayeed and Nazrul not out on 27 off 22 and 2 off 7 respectively.

A big thanks to Marcus Thurgate for being 12th man and fielding most of the day as we rotated weary Sharks on and off the field, and scoring and taking photos in between. Thank you Des Thomas of Paddy’s who stood the games alone as umpire.

All in all it was a very convincing win by the Sharks 2nd, our second for the season, and a very enjoyable day.