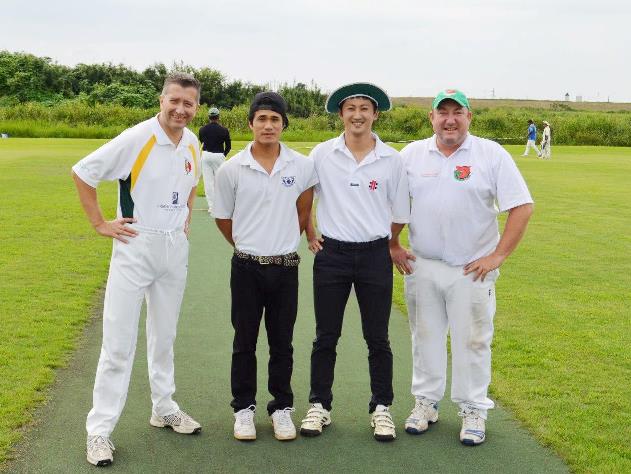 After winning just one game in two seasons the Shark 2nd XI finished the round-robin games on top of the Div. 2, having only lost one game for the season! Tigers finished 2nd and Adore 3rd. We faced off in the semi final against 4th placed Paddy Foley’s.

Both teams have big squads and two teams, but the selection requirements differed. As we also feature in Div. 1 finals we were restricted to selecting only three players who could feature in both teams. Some valuable players who ad featured in the 2s were also unavailable on the day. Paddy’s were restricted to fielding players who had featured in at least half of their 2nd XI games. Our selectors had to think hard to get it right. So for today we were:
Chris T (capt/wk), Mairaj, Scott, Chris Molloy, Murad, Sankar, Ryo, Marcus, Kris B, Sanjeewa and Sayeed. Vicky filled in as 12th. A team of 2nd XI stalwarts and many who had got us this far. We would have to be on our game against a PF who included nemesis Buddika and the usual X-factor players.

Sano 3, as much of Japan, had recently taken a lot of rain, but it was firm and healthily populated by grass and leaping ame-gaeru of various hues and temperaments. Rain threatened but it was generally warm and we avoided any interruptions. Paddys batted. 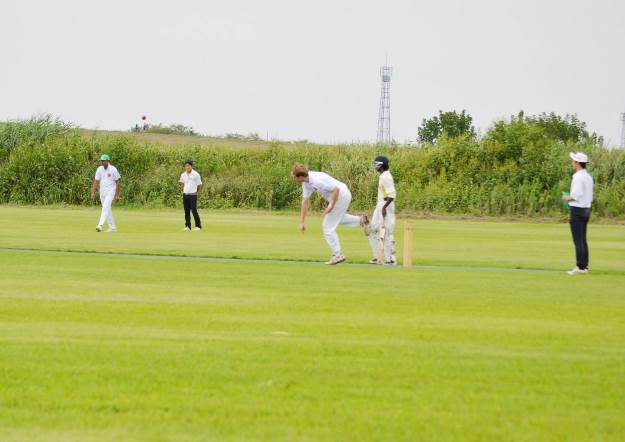 Bowling
With Red King unwrapped and field placed, Scott and Sanjeewa took us into battle. They did us proud and great lines saw few runs scored (it took 5 overs before extras got a look in!). First wicket fell to Sanjee with Chris T accepting a catch behind in a wicket-maiden. After 8 tight overs (1-24) Mairaj and KB took over.

Mairaj struggled with his line in his two overs while KB, as is his wont this season, popped up with a wicket first over, pinning the unhappy veteran Kamran in front to make it 2-37. He was joined at the other end by Chris Molloy, bowling often unplayable kicking leggies.

In what would be a great performance over the day, Molloy’s second over was a wicket-maiden as a top edge was taken by Chris T. 3-62 at drinks very swiftly became 5-68 after as Sankar trapped the No. 4 in front. Then the scoring pressure created by miserly bowling by Chris and Sankar bore fruit when KB collected and fired back to Molloy for an easy run-out! 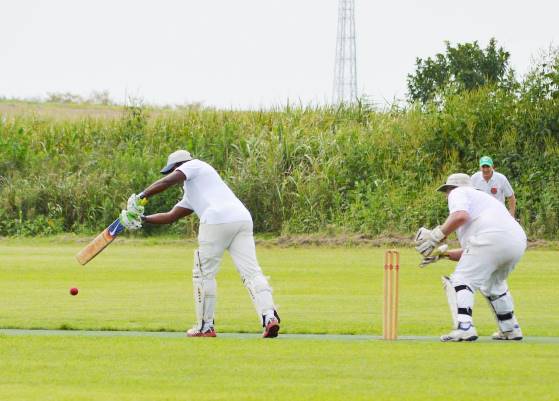 The position was very similar to our last meeting and although we came out on top then, Uddika had stood in our way. He would do so again and he shared a 102-run stand with Wawlagala. Many of us in the middle overs took a bit of a pasting as they both reached half-centuries, but it may have been different as various areas of the field were having a bad day at the office and catches both extremely difficult and, well, not so, went begging. No blame as our attack missed their targets too.

Chris Molloy, the only one to escape the walloping, finally removed Wawlagala LBW to make it 6-170. Again good fielding soon added an 8th wicket. Murad whipped a return into Chris who had the wherewithal to take the remaining bail of a disturbed wicket. We were back to a manageable total in 7-188, but the remaining thorn, Uddika, had other ideas. Scott and Sanjee returned to see off the three final overs with Murad, but with his eye in and the strike farmed, the PF all-rounder took the score to 8-220.

It was a disappointing effort in the middle overs and with a bit more luck we could have had PF in a much more precarious position. Extras hurt us after a good start but it was a good performance by the luckless Scott and Sanjee to at least give us a chance and Chris Molloy’s bowling was exceptional.

The 221 target would test us but our batting line up contained players who could pull this off, if they batted to their potential as already shown this year. 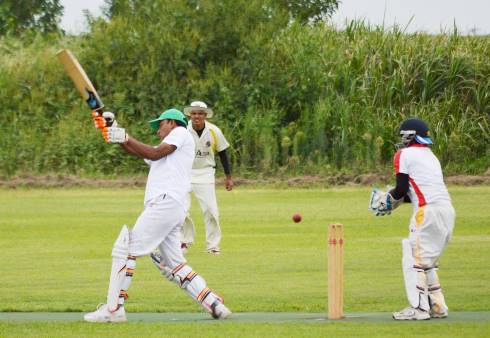 Batting
We did not survive the opening pace bowling barrage of Uddika (doesn’t he get tired?) and gun Thilan. With Murad gone early, natural stroke-makers, Sankar and promoted Sayeed, manfully stuck around but runs were not to be had. We found ourselves in a lot of trouble at 3-24 after 10.

This brought together Marcus, a bit winged in the back, and Ryo. Ryo’s first game was also against PF and his patient 40-odd was the basis of that win. Marcus has already shown his mettle. The two boys did themselves proud with a 40-run partnership. They both looked quite comfortable and definitely competent in defense against the quicks and subsequent bowling. They both found the rope, too. Ryo stroking straight up the ground and Marcus a signature cover drive and two authoritative pull shots, one going like a bullet. Sadly both fell within a few runs to make it 5-70 after 20 overs. 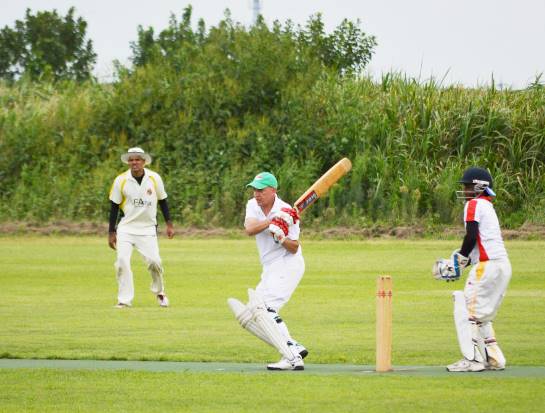 Just halfway, 150 short and 5 wickets left… We were probably not going to wiggle out of this one, BUT, neither did we just roll over and die! In fact, basically no-one gave up their wicket easily (Murad got a fifth-ball ripsnorter). Nine batsman faced at least about two overs worth of deliveries and made some, even small, impact on the score board. Given our rapid capitulations of past seasons this ability to stick around is at least heartening. They poked, prodded, pushed, knocked, nicked, canoodled and even glanced, drove, smacked, cut and definitely annoyed their way through another 16 overs and added 55 runs. All done for 125.

Chris Molloy is working his way back into his pre-sliding-door-punch-up injury batting form. Chris T is getting bat on ball. Scott, KB and Mairaj showed they can support if needed and Sanjeewa had his longest innings to date. Somewhat inexplicably all the last five wickets fell to our old foe and friend Kamran – nice effort! Paddys works in strange ways!

Anyway, with this semi final loss the Sharks 2nd XI season comes to an end. We won the minor title by finishing on top. We had some great wins and even better times. A lot of players got a go and made their mark in some way. Our two losses were no disgrace. We ran out of bowlers against Tigers. We ran into bowlers against Paddys. With a bevy of young guns returning and moving up fro MyWys next year we will be very formidable. Paddys will now face the Tigers in the final.

(Editors note: Paddy Foley’s were subsequently found to have fielded three ineligible players who had not played 50% of their matches in the 2nd XI. As a result they were disqualified and by default, the Sharks went into the final against the Tigers)