What perhaps should have been a relatively ‘easy’ win against the Aoyama University lads was anything but. The Sharks have been in good form in almost all games this season and we boasted a fairly strong Japan Cup team in both skills. Did we go in with a lazy attitude? Did Aoyama surprise us with their ability? Maybe a bit of both.

At the pre-game meeting Chris T pointed out that we needed to make the most of every game because washouts and run-rates can have a great effect on the Japan Cup results. It is fair to say we had a solid if not strong top order and one that could be very devastating if it got going. In the bowling department we were less blessed but had wicket-takers and some serious heat. Perhaps we were all thinking of an early trip home. Perhaps of runs and wickets to be had. In fact, we got a mighty big scare.

Batting
Sankar, fresh from a rapid effort last week, and Karthik, who had something to prove, got us off to a good start with the help of wayward bowling. Sankar started where he left off with a couple of blistering boundaries while a slow-starting Karthik uncorked a massive 6 down the ground. After 5 overs they had knocked up 32 and we settled down to watch the fun… It was to be our best partnership, and best for a quite while… Karthik was caught chasing more runs (1-32) and Sankar followed almost immediately, bowled quite comprehensively (2-33). The new pair were Dave and Nick. There was a steady flow of wides but the bowlers were warming to their task and we know the Japanese teams are quick in the field and the boys can catch. They showed us how.

Nick went huge to the legside boundary and was then caught in the deep (3-38). Marcus Thurgate joined Dave. Dave cracked a beautiful square pull but was caught on the same shot (4-42). Chris Thurgate joined Marcus. Marcus was yet to face a ball but would now as the batsmen crossed. If Thurgate the Younger was unnerved by the senior batsmen mayhem he did not show it. First ball a powerful hook square for 4 was followed by a classic cover drive for the same to see out the over. Would the Thurgates settle us? Not today. Chris was cleaned up and we were a very embarrassing 5-51! Not expected and not good. But we still had some batting depth, or so we thought. Hassan added a single and then a tickle to the ‘keeper. 6-52. We were now officially in a lot of bloody trouble. Vivek strode out, took a couple of ones before going for a maximum over square before unsuccessfully trying to do it again. 7-63.

And now, we would now see something we have not seen so much of this season – ladies and gentlemen, I give you… the Shark Tail… 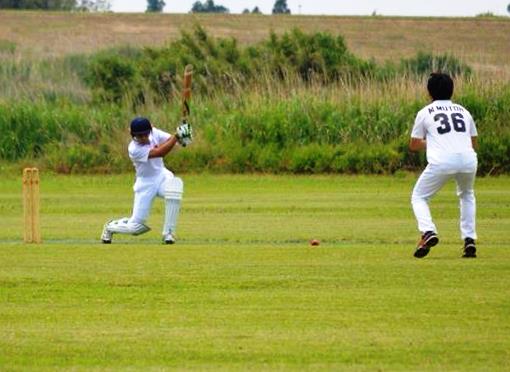 I wonder how many times in the history of cricket an in-going batsmen has set off with the words (in any language), “You are #$%&ing KIDDING!” Once, at least, I know. KB joined the cool as ice Marcus. KB studiously took a wide before easily eclipsing his entire 2014 run total with a deft pushed 2 followed by a sumptuous and authoritative straight drive for 4 past the despairing bowler. HUMPH! Marcus added his own clipped 4 backward of point as the pair took also singles and wides on offer. They added a very much needed 26 before KB waited an eternity for a 4-ball to disgustingly bowl him around his legs. 8-89. Enter Mairaj, who admits he really enjoys a rearguard action and, wow, did we need one now!

Mairaj played himself slowly in as the pair added another double figure partnership and got us to three figures before a tiring Marcus holed out in the deep (9-100). Last in with about 4 overs to go was the very inexperienced Yu Hamamichi. Mairaj chipped it around and Yu added a couple of his own including a nice little tuck/turn down to fine leg. Mairaj then launched a huuuuge lofted 4 over mid on. The very sheepish Sharks went completely berserk! Unfortunately with one ball remaining Yu fell. Chiba Sharks all out 114 in 19.5 overs. The tail had added 64 runs and with the help of wides dragged us to a defendable but still quite deplorable 114. 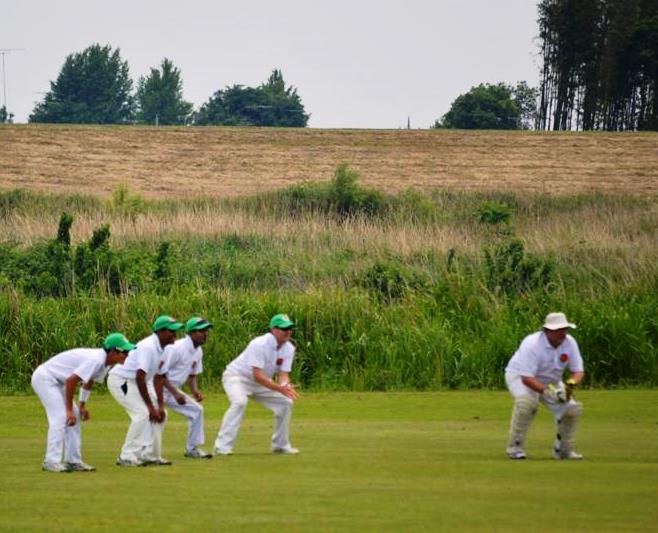 Less said about our batting the better – Chris informed us that we would be putting Aoyama on the back foot from the start and keeping them there with good bowling and fielding. Hassan opening up with Vivek. Two Hassan wides were followed by a ball that clipped the exact top two centimeters of middle stump. It is debatable whether the opener saw it. It seemed a good tactic so Viv followed with the same, the other opener gently chipping to Marcus at short mid-on. 2-9. This soon became 3-14 as Viv shot out another set of stumps. Hassan also softened up some body parts of the diminutive Matsumoto. We were giving up far too many extras, though, and the occasional edge or well aimed slog reached the rope.

Second change of Marcus’ leggies and Sankar’s miserly line took a couple of overs to get traction. The first of two ‘Stumped C. Thurgate Bowled M. Thurgate’ got us 4-35. So far an amazing amount of edges eluded the permanently close in field. Dave ended that run with a very sharp take super short mid-off to give Sankar his first (5-59).
KB took over from Marcus and removed the plucky (and lucky) Matsumoto with Nick catching the edge at 1st slip. 6-62. It was a matter of time now as a wild slog at Sankar went straight up and down into Chris’ mitts (7-68). We had numerous stumping appeals turned down but Chris got Marcus his second wicket with a very slick piece of work (8-78). The end came quite quickly, surprisingly and spectacularly. With Sankar and Marcus bowled out and KB holding down an end, Chris tossed the ball to Yu Hamamichi, our second player from the Osaka high school cricket power-house, Uenomiya.

No-one knew what to expect, least of all the Aoyama batsmen. His first ball was popped invitingly at a perfect knee high catching height to Hassan at short mid-off. He accepted. First ball, first wicket as a Shark. 9-81. His second was very full and bent around the lunging No. 11 to clip the base of leg stump!! Yu, 2-0 in two balls (new nickname, ‘U2’ – he rocks and he flies high!). Aoyama Gakuen University all out 81 in 17.2 overs.

So we got the win but missed a chance to consolidate our Japan Cup points. But a win is a win and we will take it. Marcus showed maturity beyond his years to work with the lower order. They fought it out and the most unlikely of players could contribute significantly with the bat to a Shark win. Hats off to Aoyama as they took full advantage of our wayward top order.

One hundred and fourteen was always going to be hard for them but 81 was a little too close for comfort (aided by our 32 extras!). We used six bowlers and everyone got wickets – it showed the continuing develop of the depth in the Sharks. We took all catches that came to hand. The field had little work but Yu was very sharp at point and we chased down a number of ball to cut off 4s (Nick and Marcus).

Let’s hope this is just ‘one of those games’. But it goes to show that in cricket you can never take anything for granted – either team on paper, tail that is long in the tooth, or a player new to the game. Big THANKS to Yuki Thurgate and Masakichi-san for their immaculate scoring, and to the Brit Embassy boys for umpiring – very professional.