On a cloudy day, the team arrived at the Sano International Cricket Ground on a good mood after the nail biter win against Max CC. The game was being played on turf which excited a lot of the members but unfortunately the start had to be delayed due to rain on the previous day.
After waiting for about 45 minutes, Sharks unfortunately lost the toss but were surprisingly sent in to bat. The team playing today had a mix of youth and experience which is great for the future of the club.

Batting
Dhugal and Muneeb started things at the top of the order and Sano decided to start with pace from one end and spin from the other. Unfortunately for us, Dhugal copped a rough LBW decision which put us on the back foot.
Muneeb soon followed after going back to a ball that stayed low. Marcus and Takady were together for a couple of overs but Takady also was soon dismissed. 3 for not many and we were in a bit of trouble.
Pav and Marcus tried to rescue us and made a solid partnership but Marcus got out to a ball that probably held up on him. Nav was the next man in and tried to show some intent against the spinners but could not clear the infielder.
Limo and Pav tried to take it to the drinks break but Pav got out on the very last ball to a good wrong’un that turned back a long way. This wicket seemed to be a spin friendly wicket and Sano were using it to good effect.
Limo was then dismissed after yorking himself charging a spinner which led Vicky to the wicket. Playing defensive was not his game and he soon departed, which brought Viv to the crease. He set off some fireworks which got us over a hundred before he too was dismissed stumped.
Rui brought up the rear and hit his first 6 in the JCL on the ground by running 2 and getting 4 overthrows. But all in all it was a disappointing batting performance. 119 all out from 28 overs was definitely under par but cricket is a funny game so we never know……….. 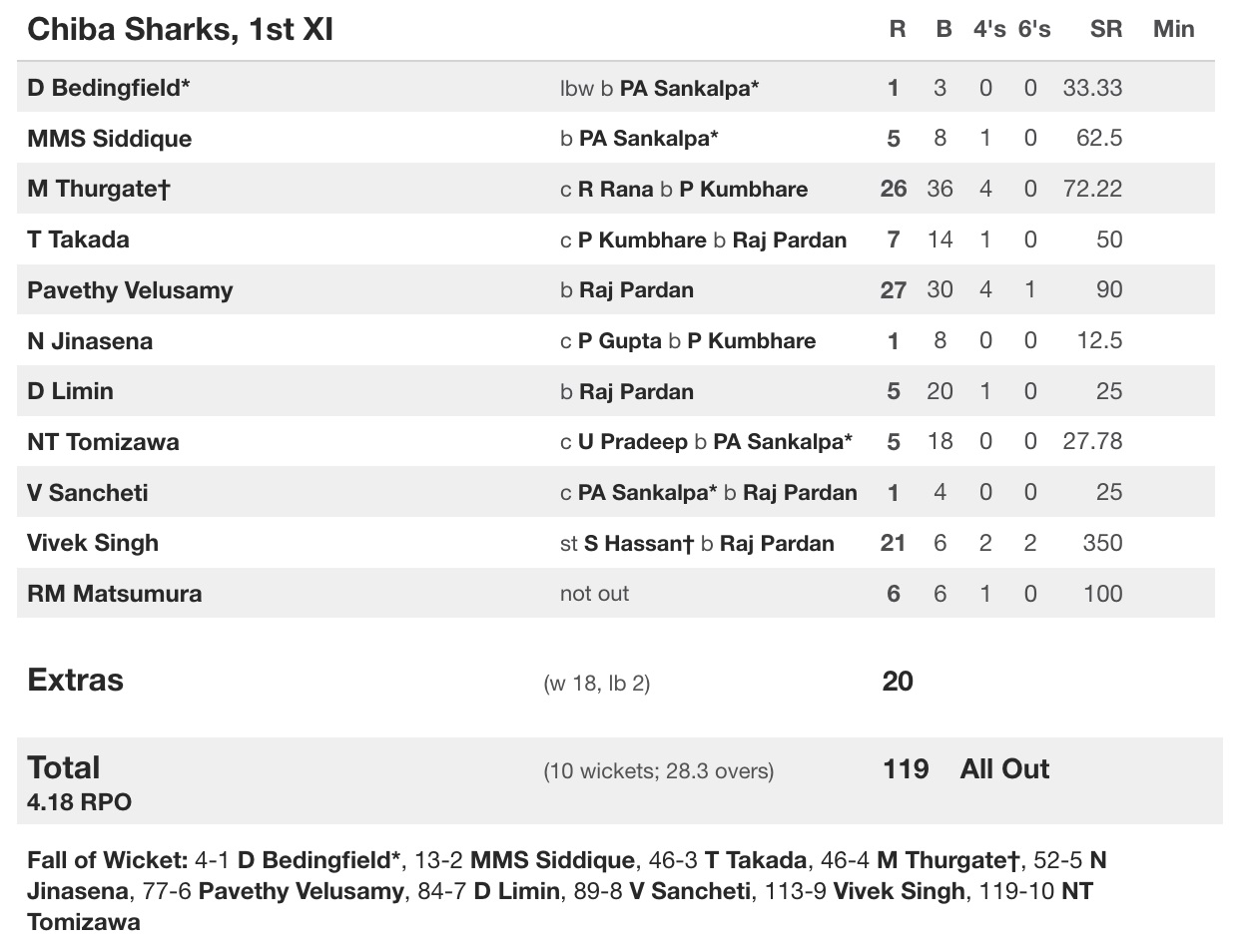 Bowling
Unfortunately our poor performance with the bat was our undoing. We clearly didn’t have enough runs on the board and credit to Sano they were smarter than us with the bat. This is not to say our bowlers didn’t give it their all.
The bowling started well with Rui taking out both openers and Tomi showing everyone why he’s called Shinkansen with a great spell as a first change for an immediate impact. Pav also bowled well in the middle overs.
Everyone chipped in but unfavourable calls by the umpire and a couple of dropped catches meant that it wasn’t our day.
But today was a good experience for most of the players playing on turf. It shows that we have to concentrate and work hard to get runs. This experience will definitely make us a better player in the future
Wyverns better be ready because the Sharks are hurting and ready to rumble!