Sano International Cricket Ground (SICG) was reopened today with much fanfare and parking of big black cars. We now have two beautiful surfaces in SICG1 and the brand new SICG2. Both have synthetic pitches and turf wickets. After th 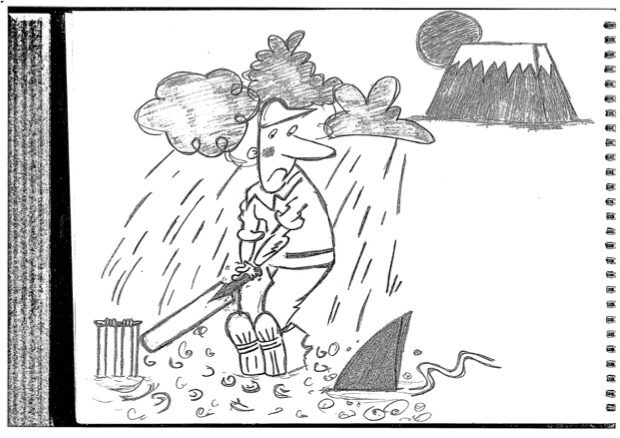 e ribbon cutting ceremonies, on SICG1, the Japan Men and then Development Academy played with Bangladesh (aka Rising Stars). On SICG2, in rising temperatures, Kendel Fleming cut the Wombats to ribbons.

The heat was back with us after some small respite last weekend from Typhoon No. 12, with the mercury hovering well above Ian Botham’s batting average for days. This might have knocked even the indomitable Beefy on his big behind, and certainly cooked his meat and potatoes as well. Nevertheless, when it is Sharks VS Wombats, the JCA battle of surf and turf, of tooth and nail, of fin and paw, it gets played in whatever the elements throw at us. (Here is some artwork from one such day in Fuji by the legendary Shark, Alexis Coovre. Done in the back of a damp scorebook while both teams huddle under one tent.)

We are the JCL competition’s longest and fiercest rivalry. We are alike in many ways, but no players switch sides. Everrrrr. Neither team is perennial table-topers of years past. Neither of Dave Lollback nor Jared Shearer bellow as much anymore. We have ‘mellowed’ of late, but the results haven’t, with both teams claiming recent one-run victories off final balls (this year in a throwback to Alexis depiction!). It was not only very fitting but also our right that these we two proud, powerful foundation clubs (we are more than ‘teams’) be the first to play on the new SICG ground.

Right. Enough of that. Yeah, nah, we smashed ‘em!

Doogs won the toss and probably with a short, quick sardonic/sadistic smile announced, laconically, “Ahh, yeaaaah, we’llhaveabat”. He might as well have done so with a square of black velvet on his head. It was so bloody hot that any team fielding first was up immediately against it. In the circumstances it would have been almost criminal negligence not to send an opposing team into the field… 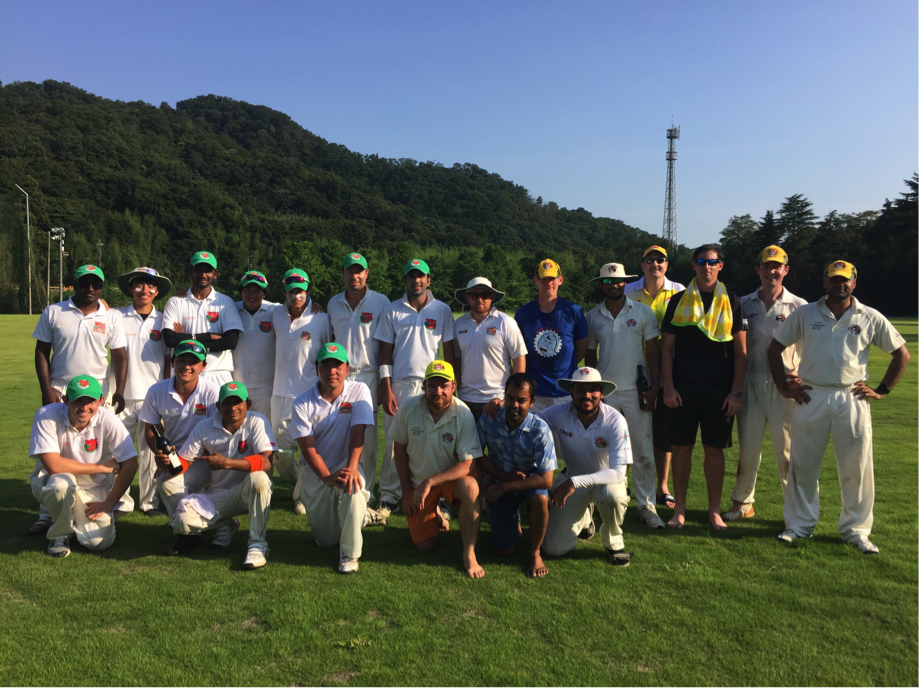 Doogs opened with Kendel. It was a watchful start. Although a couple of boundaries came it was quite tight bowling from Jacob and McKay. The Cap was warming up though and if these two took off start running for cover. It didn’t as Doogs fired one back to the bowler in the 5th and didn’t the Wombats love it?! They were without their captain, ‘keeper, opener, anchor and talisman, Alex Patmore, today so they would have felt it quite the karmic even-up. When the in-form Pave was LBW very next ball they would might have been thinking, ‘Alex who?’. When Takady went one run later and we were 3-18 in the 6th, well, under the Wombatic din you could just about hear the bums squeaking in the Sharks tent, but nothing else. Kendel must have been a bit nonplussed, too. Arata ‘Kazu’ Ueda made his way in.

The Shark new boy already had some significant scores this season and, boy, did we need one now! Meanwhile Kendel started pumping the bellows of a fiery revival. Ball to annual thorn-in-the-side, Roney. But Kendel and Arata had no such Roney ‘baggage’.

It was biff, bam, crash in Roney’s first and for good measure Kendel greeted the next new bowler with a 6. Arata was actually outscoring Kendel, but came undone on a rapid 23 off 15. 4-71 and soon it was Wombats hitting back again when Asala went LBW on the final ball of the 13th. 5-72! This was looking very, very very ominous and horribly familiar… A Thurgate to the crease and rescue. Different one.

Marcus’ form was also on the rise and what a chance to bat and learn. Roney was looking settled but on the cusp of drinks Kendel gave us a glimpse of what was to come, spanking a 4 then 6 as the pair also picked up some loose change to take us to 5-89 after 15. Advantage still very much to the Wombats.

WE knew of the potential for a big innings from Kendal, and if Roy Schneider had been in the tent he might have muttered, “Wombats – yer gunna need a bigger boat”.

After the break Kendel led off with a boundary to give him his fifty, but it was Marcus who quickly pushed us into three figures with 244 in a 15-run over. New bowler, Cronin, found Kendel well and truly tuned up as another 6 disappeared over the rope. Marcus had done his bit by giving the strike to Kendel, who was peeling off 4s as easy as bananas. The Wombats mustered a bit of joy when Marcus, perhaps distracted, holed out on a top-edge sweep after a vital 50-run partnership. CSFB says:

Tomizawa joined Kendel in the seventies, and if the heat – it was blazing hot – wasn’t knocking the stuffing out of the Wombats, it was about to get much worse. Probably they realized they were up against something, like the first galloping Mongolian horseman would discover when he met the Great Wall of China. Kendel’s bat was looking and sounding like two teakwood doors fixed together by railway carriage springs, with a rocket launcher for a handle. After Marcus departed Kendel took a little stock-take (or change of magazine) and tapped it around to 80. Tommy then played incredibly sensibly and maturely in support of Kendel. Only ten runs came in three overs. 6-138 off 22.

Then all Hell broke loose. It was like a leather meteorite shower and Kendel was the Kuiper Belt. ‘Belt’ being the operative word. 23rd 6,4,6; 24th 2,4,1 and that was 100 up!!! First innings on Japanese soil, first JCL game, first Chiba Shark game, and first century on the new SICG to Kendel Fleming!

To celebrate the ton and the 25th the young man had two sighters of new bowler Bugalia, then down the ground went 6666, each one a little longer!! Up to 128 in a flash. Meanwhile, Tommy – remember Tommy? – held his end up, tapped out a couple of runs and got a sore neck watch the fireworks. 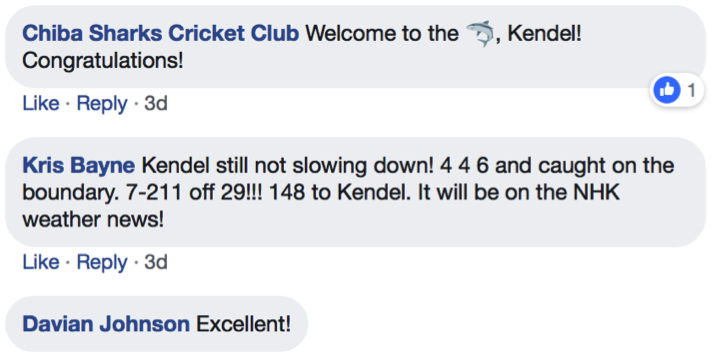 The Wombats at drinks breathed sighs of, well, it probably wasn’t relief. But Tommy was just warming up, though, as the Shark version of the ‘fast bowler cartel’ got their chance. Joined by Muneeb, the two young guns proceeded to run the poor Wombats ragged, haring singles and twos. In an innings of two halves the FB audience was loving it! 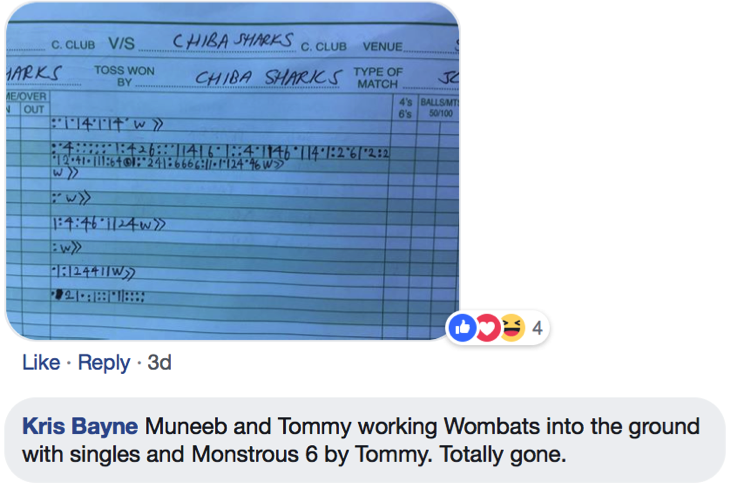 Tommy, as we know he can, picked the eyes out of two deliveries for the maximum and one did not come back! He was run-out somewhat needlessly looking for a second run, however. In the Wombat column, Roney nailed the run-out and held out for the only maiden of the innings. Muneeb was joined by fellow quick, Rui. A few more scampered runs came but we may have let a really big innings slip when we closed at 10-246 off 36.1 overs.

It would take an all-might effort by the Wombats to get close to us. Already without the JCL Div. 1 No. 3 batsman, Patmore, they were exhausted and our bowlers were well-rested and potent and many. The Woms were also one marsupial down, with Dharmadasa and his dislocated finger carted off to hospital by KB. But the Sharks know better than to turn their backs on a Wombat. 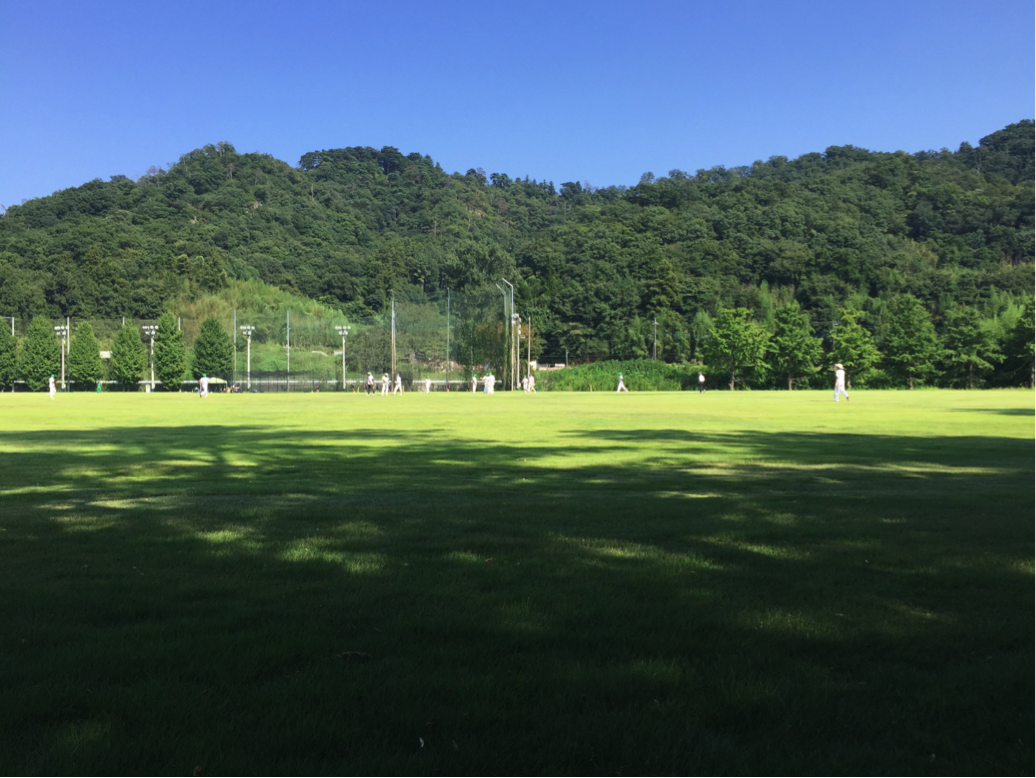 While the author was battling red tape at Sano Shinmin Byoin, the Wombats had their hands full with our red ball bowling battalion of Matsumura, Siddique and Tomizawa. And I was having more luck. Rui was spot on as usual but it was Muneeb who got the Big Wombat, Jared, with a beauty that flew to slips and was taken by… guess who, Kendel Fleming. Muneeb was delighted. Jared less so, and for some time. 1-10 off 4. Tommy with ball in hand followed up his stellar batting with a wicket first ball, with Asala getting into the game taking the catch. He worn a few runs after that but Dhugal has bowlers to burn to a very singed Wombat batting line up. As the score moved into the 40s for 2, Mahesh the Magician got his chance. He had seen no action yet and was fairly bursting! In his second he stuck pad and up went the finger. 3-42 became 4-43 as Pavethy made his mark on the game. CSFB saw it like this:

It was indeed Takady taking a tumbler at deep mid-on. Kinda weird (and fitting) that blokes who had had a limited day with bat all got into the fielding action! To their credit the Wombat middle

order of Luke Eyes and Jamie Payne settled in to restore some Wombat pride. They bloody-mindedly defied the heat and fatigue over several stingy overs, including three maidens from Mahesh and Pave. 4-56 and something needed doing. A bowling change broke not only the deadlock but also the back of the Wombats. Whispers were that Kendel Fleming could also “bowl a bit”… CSFB described it:

It was a bit understated as the first over was but a loosener. In between Takady dropped straight onto his line as well. In his second Kendel went bang bang. Good speed and bounce and Marcus had two catches behind the stumps to his name while Kendel had a double wicket maiden and 2-1. (Please, Mum!? Can we take him home???) Luke Eyes upped anchor. Takady bamboozled some more, Kendel then made it three and 7-64. CSFB pondered:

That would have been something but Takady, the greedy thing, had other ideas. Jamie Payne finally succumbed, nicking behind to give Marcus his third catch (8-64). Takady then returned serve after a whack from Cronin to bowl him. All over after about 26 overs, Wombats 9-69. Sharks by… a lot.

No need to gush anymore over Kendel. He was awesome. Our connection with him started a few years back. Let’s hope we have some more to come. Nonetheless we were in very deep trouble at 5 for not much and it took some great partnerships wi 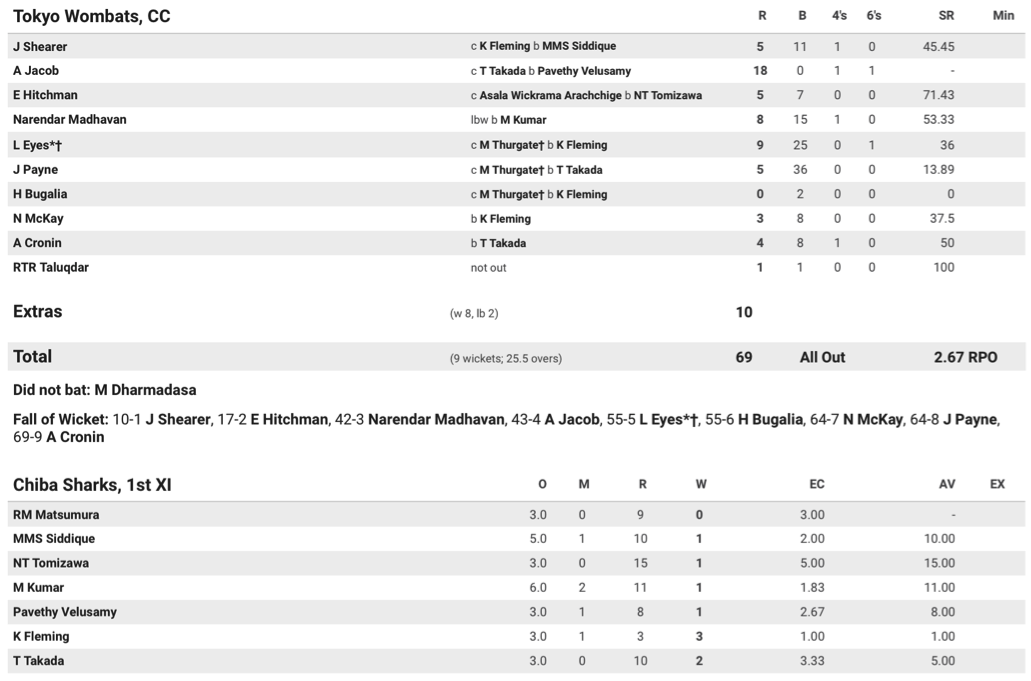 th ‘Kazu’ Arata, Marcus and then a big one with Tommy to get us out of that hole. And in the field it was the young blokes again who started and finished things off as bowlers and catchers. We still have talent to come back in, as CSFB noted:

As for our opponents, on days like this the toss is a make or break thing. They had us on the carpet there, and credit to them for getting to 26 overs with the bat. Lesser men would have folded like cards chasing around 250. We have a long way to go before the Sharks even up the ledger with the Wombats. Over the years there have been some baths given and taken, but this was an Olympic-size swimming pool of a bath (now there’s an idea at the far end of SICG2!), and today it was full of fins. 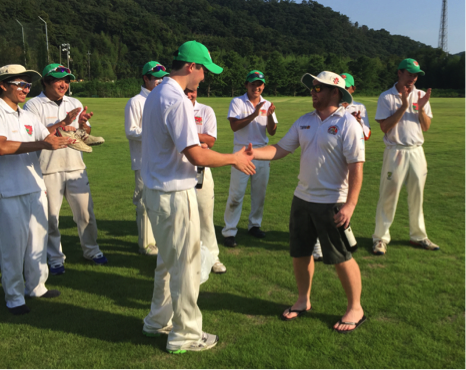 This win takes Chiba Sharks to the top of the Div. 1 table. Our two defeats have been to the Wombats (by one run) and to the Tigers (we had nine players plus aged subs). We have avenged the first one. Next up are the Tigers on August 24th. 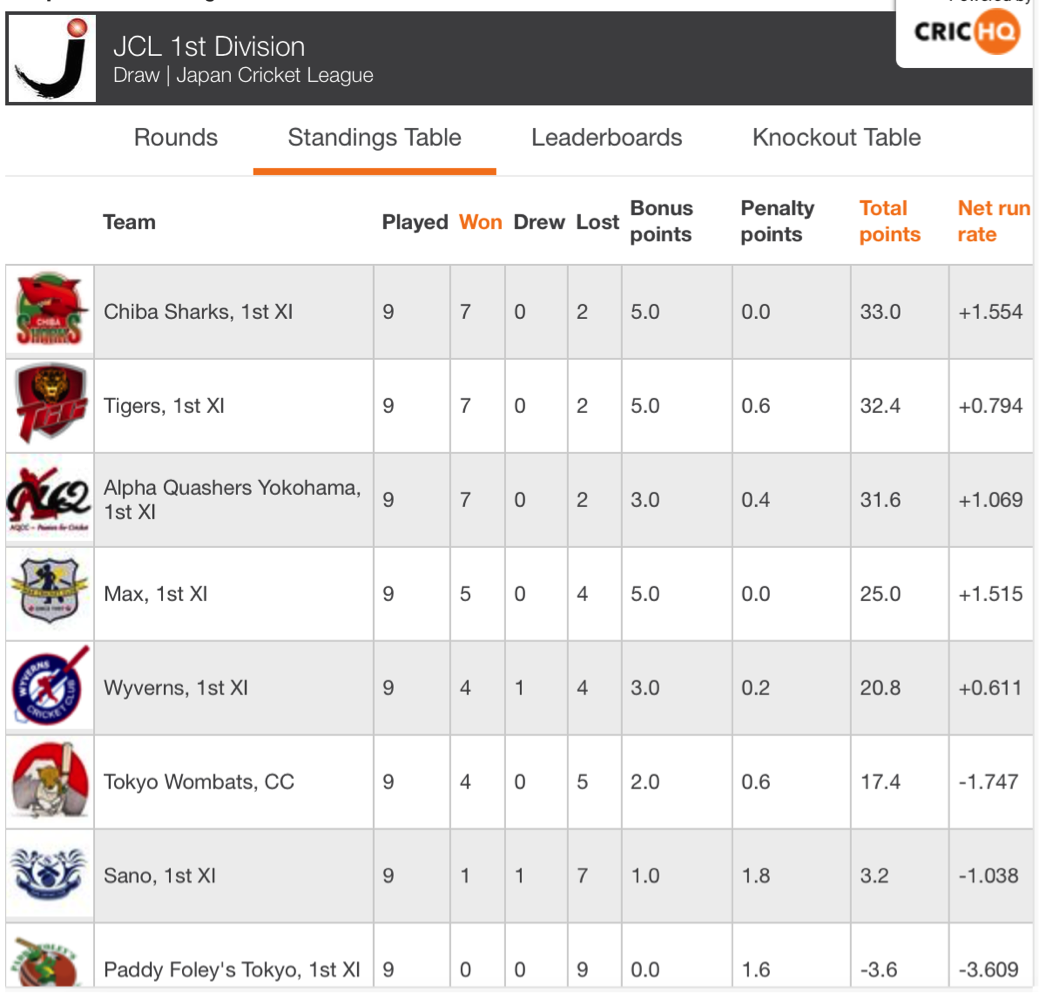