SUPER 2nds BACK ON TRACK

After losing their proud one-match unbeaten record last time out, The 2nd XI 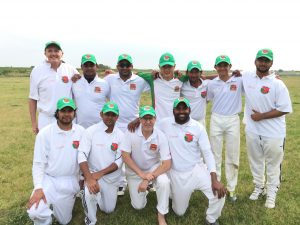 The Sharks were forced into a couple of changes to the team that had been announced a few days before. Unexpectedly heavy work commitments forced Skipper Sankar to miss the game, but no worries – we had the experienced and capable Kaptain KB to take the armband (yes I know, no armbands in cricket, but half a century’s worth of football clichés can’t be eradicated overnight). And then somewhere between Omiya and Kuki your reporter’s phone went off, KB announcing to a slumbering 12th man that we were one man short and that something more than pen-pushing duties would be required.

Conditions at Sano were pretty much ideal for cricket; temperatures in the mid-twenties and enough cloud cover to ensure that the SPF50 would suffice and the industrial-strength heat-shielding oil could be kept in the bag for later in the summer. And once a complicated bail-sharing agreement had been successfully negotiated with the Kanto League competitors on the adjacent Sano 4 ground, we were ready to toss up and go. When KB told us his preference would be to bowl first if he won the toss, the order of play was, according to Adit, a foregone conclusion. How did he know this? “Because Indians always choose to bat”, was the succinct reply.

And so it proved.

Our strike pair of Adit and Guarav got the Sharks off to a great start, dismissing both the opposition openers within the first three overs. Guarav’s range-finding opening ball strayed fractionally down leg, but his second found an edge which keeper Sumon pouched dexterously. Guarav’s four-over spell included two maidens and yielded the princely total of zero runs off the bat. At the other end Adit reaped the benefits of his recent fitness campaign, bowling six pacy overs in which he never let the batsmen settle, and castling the second opener along the way.

Our change bowlers were up for it too. Anand looked more like a man bowling for the first time in 14 months than in 14 years, and though he didn’t bag a wicket for himself he helped his young teammate Krishna to bag one by taking a good catch in the semi-deep. That was the first of two for the young leftie, who bowled a seven-over spell with admirable application. Murad too had more dots than runs on his card, and got a well-deserved wicket when Koji marked the milestone of his long-awaited return to Sharks action by getting both hands round a fiercely mis-struck drive that came fizzing over his head at point.

The interim result of all this good work was that by the first drinks break the Quashers were treading water at about 3 an over, and below the surface, the Sharks were circling. When KB brought himself on to bowl, treading water gave way to thrashing around in desperation. Taking a wicket with your first ball is always a good way to make a mark on a game, but doing it in four of your five overs is wee bit special. Our captain for the day induced false shots of all descriptions – snicks, top-edged catches, misjudged sweeps for LBW – but the most-satisfying part of an impressive fifer must have been the coup de grace, a clean-bowled to end the innings. It should be mentioned that while all this innocuous-looking hellfire was being rained down from the River End, at the other end Neel Date was making a very promising debut with the ball. He didn’t get a wicket this time, but it won’t be a long wait till it does.

KB finished with figures of five for tuppence, and the Quashers were all out for 131 in 32 overs.

KB continued to lead from the front by volunteering to take Anton’s opening spot alongside Murad. He only made a couple of scratches in the scorer’s book, but in sticking around for 22 balls and denying the opposition the much-needed early breakthrough that would have put some wind in their sails, it was job done. Meanwhile at the other end Murad was calmly and methodically setting about getting the 3.3 runs per over required for victory. When Sumon joined him at the crease it became increasingly clear that the Quashers didn’t have any guns big enough to blow these Sharks out of the water. Both players found the boundary often enough to keep us well above the run rate, and Murad looked to be on the way to the half-century that he missed out on so narrowly last time out till he succumbed to an uncharacteristic rush of blood to the head, advancing down the pitch while the bowler was still halfway down his run-up and thus turning a long-hop into a yorker that cost him his middle stump. Still, 41 off 59 balls to add to his 49 last time out will do our classy opener’s average no harm at all. 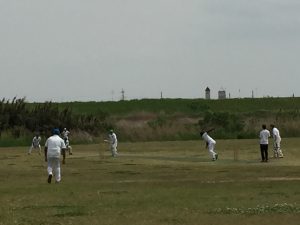 Cue 15-year-old 2nd’s debutant Neel Date, a young man with a technique so classical he should’ve been batting in a tuxedo with a short-handled Stradivarius. Unfortunately, at any level of cricket one wrong note means an unfinished symphony, and after an elegant 7-run minuet Neel had to take his bow.

Guarav’s departure five minutes later might have raised some faint stirrings of hope in Quasher hearts, but you’d have needed a monster-sized stethoscope to hear them, because even as we were losing a few wickets at one end Sumon had been working away at the other, mixing caution and aggression into a refreshing Sunday afternoon cocktail. Rubal’s recipe (3 parts airy swipe and 3 parts boundary) was a lot spicier but just as tasty, and soon the whole team were sampling the sweet taste of victory as the target was reached in plenty of time with Rubal not out 14 and Sumon unbeaten on 55.

Fair play to the Quashers, who never gave up the fight, batted as aggressively as they could, and played the game in a good spirit. The umpiring by the guys from Adore was efficient and unobtrusive, which is just the way it should be. All in all, an excellent day’s cricket with the right result at the end of it. 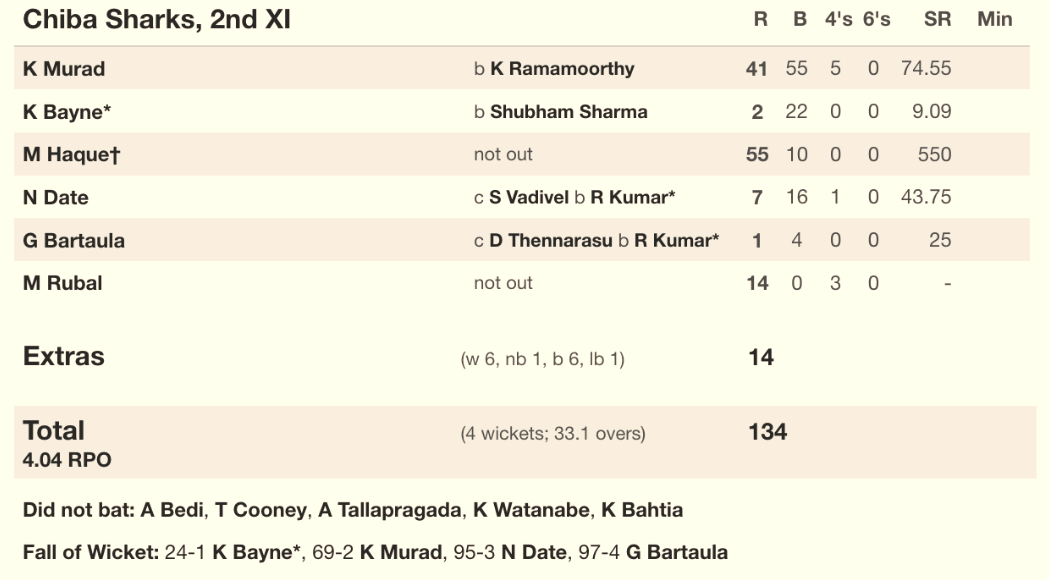