Dr Wheatgrass Highlights of the match: The turning point big six smash over long-on by Davian

It was a beautiful Saturday morning when the Alpha Quashers took on the Chiba Sharks at Sano 3 Cricket ground. A very important game for the Sharks as they must win to keep their hopes alive to get into the second stage of the JCL 1 competition. The skies were covered by clouds and the morning was cool as the teams got ready. The umpires and skippers went to spin the toss. The Quashers spun the toss while the Sharks called. The Quashers won the toss and decided to bat first.

The scorers and spectators were ready and waiting for a great day of cricket. The opening batsmen went out hoping to get a good start for their team but the sharks’ opening bowlers had other ideas. An excellent start from R. Matsumura saw the batsmen struggle with his good line and length, and they only managed to get a run off his first over. The excellent bowling continued in the form of M. Saddique. He got the first wicket with his third ball, Sudharshan edging to M. Thurgate who made no mistakes with the gloves. The Quashers then held their heads down and dug in to consolidate for the early wicket.

With the skies starting to clear up, the batsmen started to enjoy batting. The Sharks relaxed a bit and started bowling badly, allowing Srinivas to get 36 and Rohit 34. The pair put on a partnership of 54 after the first wicket. The captain of the sharks searched for a bowler who would hold a consistent line and length to frustrate the partnership, and he found it in the form T. Takady and D. Johnson. Johnson broke the partnership by taking the wicket of Rohit caught by Pavethy at short cover, then Takady got the new batsman Nilesh for 16 caught by Johnson at short midwicket. Johnson and Takady worked well for their skipper in ensuring that the Quashers remained quiet throughout the middle overs. Takady ended with figures of 6 overs 1-35, while Johnson broke the back of the quashers with his very tight line with figures of 8 overs 3 maidens 3-15.

The Quashers tried to get some quick runs in the form of K. Vellingiri who could only manage 19 before being out LBW by Paveth with his off breaks. He finished with figures of 7 overs 2-33. It wasn’t long before the captain brought back Saddique to close off the Quasher’s innings. He finished with 5 overs 2-21. The Quashers fought to get to 154 all out in the 37th over.

The Quashers, who are known for their strong bowling took to the field followed by the Sharks needing a win. This was going to be an interesting battle. The Sharks decided to open batting with Johnson and their Skipper Dhugal. It wasn’t business as usual for the Sharks as they went to bat, they were determined to win. G. Singh started things off for the Quashers with a very tidy first over, with only one run from it. This good bowling was followed in the second over by M. Annan with only 3 runs coming off his first over. Johnson’s eyes lit up as he went after the bowlers with no success in the first couple overs. 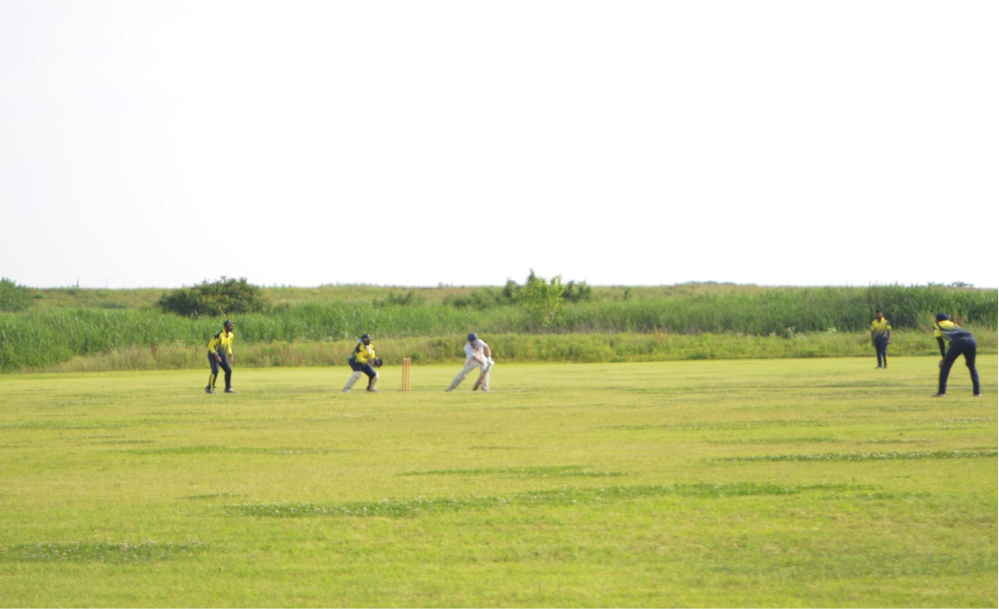 It wasn’t until the 6th over when Annan pitched one up and Johnson went after it, hitting it over long on for a 6. This over ended up going for 16 runs as the 6 in the over threw off Annan’s line. Dhugal supported Johnson as he launched an attack on the Quashers’ bowlers, hitting the gaps taking ones and twos. In no time both batsmen were scoring freely in reaching their first milestone as opening partners, taking the score to 50 without loss in the 9th over.

Johnson continued to score freely until the 14th over when he missed a ball and was judged LBW. At this point, it was still anyone’s game as the score was only 77-1. But Dhugal was set in his 20s. The next batsman was Pavethy, and all he needed to do was support Dhugal which he did very well, by playing some nice strokes on his way to a quick 19 before going for one too many shots. He was caught at long off, off the bowling of Devendra, the Quashers’ star left hand spinner. The score was now 126-2 in the 24th over. By this time it was too late for the Quashers.

The Sharks were smelling blood when they noticed an opportunity to receive bonus points if they got the runs as quickly as possible. Dhugal got trapped LBW for a well-crafted knock of 54. The score was now 138-3 in the 27th over. This brought Takady to the wicket who was told to get the runs quickly. A. Veda joined Takady, and the pair quickly got the score to 155-3 in the 31st over.

The Sharks won the game and ended up with bonus points. The sharks got to 155-3 in the 31st over.

A great day of cricket has come to an end. Johnson with the ball and Dhugal with the bat were the main standout in the day’s game. A very troubling line, swinging the ball both ways was too much for the Quashers to handle. Johnson then followed up his good bowling with an aggressive 40 runs to support Dhugal, as he made sure he secured the win by steering his team home with a captain’s knock of 54.