SHARKS FALL SHORT IN LAST OVER THRILLER
by Kavin Jinasena

Dr. Wheatgrass Highlight of the day: Brilliant knock by Sanjay (48) 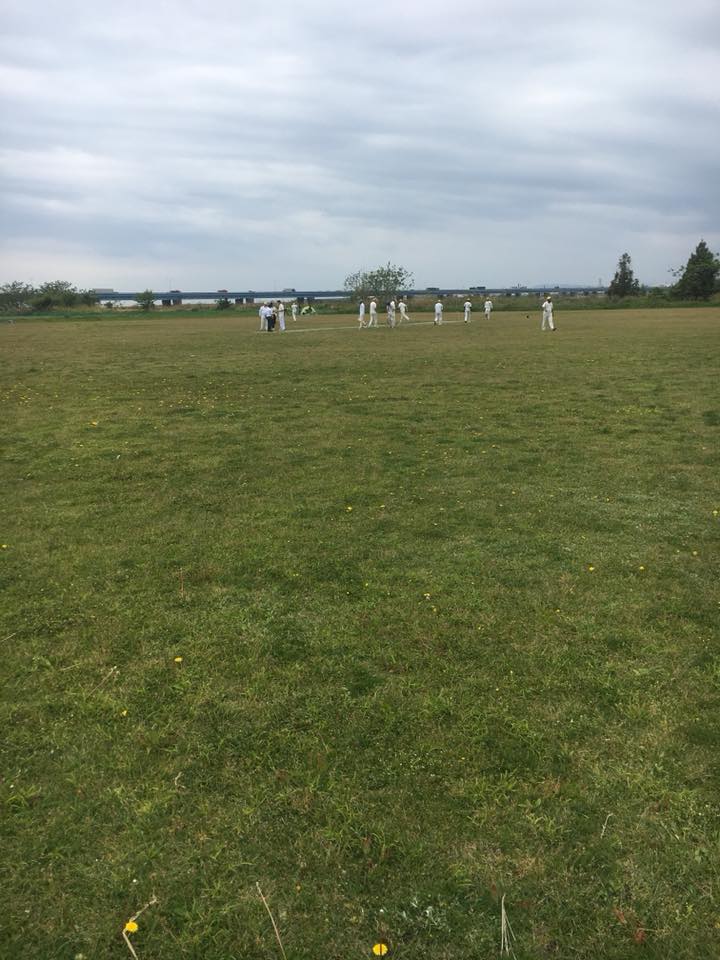 The second round of the first division of JCL was in Fuji. As majority of the players live in Tokyo, Fuji was far-off and getting there was almost as hard as playing there. It had rained the day before and the forecast predicted a shower at around 3pm. The team to face on the day was the Wombats, with whom we share a history of close games and rivalry. Coincidently, the skippers of both teams were fresh off a century, so there was a lot of anticipation and eagerness towards the game.

After a short warm up led by Tommy, the captains went to the middle for the toss. Dhugal won the toss and chose to bat. With the destructive batting order we had prepared for the day, we were looking at a high score to defend.

Sanjay and Dhugal were to open the batting, with Dhugal on strike. Dhugal started off the innings calmly rotating the strike, finding the gap and getting in his rhythm. Sanjay was contradictorily aggressive striking the ball with near perfect timing. It seemed to be the perfect opening pair for a 40 over game. Both batmen were looking incredibly comfortable against the wombats opening bowlers. Sharks were proceeding with a healthy run rate and confidence. Dhugal got out LBW to a full toss in-swinging into him by the first change bowler and Kavin swiftly followed with an edge to first slip with a score of 10 and 0 respectfully.

Pav was the number 4 who went in at a score of 56. Sanjay was causing absolute chaos at the middle, hitting a glorious 6 and a barrage of boundaries and doubles. Pav played himself in for a while and then joined Sanjay, scoring boundaries. Sanjay got out LBW similar to Dhugal and Arata was in at a score of 82. Pav and Arata put on a formidable partnership about 50 runs till Pav got out on 40 at a score of 141 and Arata followed leaving the score at 155. Marcus and Tommy and the rest of the lineup added 18 runs to the total which left us at a score of 169-10.

We expected a higher score, especially due to Sanjay and Dhugal’s good start but the tail (and number 3) could not fire on this occasion. They are sure to score well later in the season.

With the destructive bowling attack served up for the day, 169 seemed like a good score but with their opening pair, Patmore and Bracefield, the match could go in any direction. After judging the conditions and the situation, the skipper decided to start off the attack with a bit of off-spin and pace. Mahesh and Rui bowled magnificently, especially Rui. The Wombats opening pair stayed for a while but Rui provided the break through with his tight swing bowling. Bracefield unwillingly offered an edge which Marcus caught without hesitation. We only needed two more wickets to get to the Wombat’s tail. First change bowlers Sanjay and Wakita were up. Sanjay bowled with patient lines and length but went unrewarded. Wakita is commonly known for his pace but he struggled to find his rhythm on the day due to the slippery wicket (a small drizzle occurred before). We were in bad shape and it looked like Wombats will have an easy victory over us.

It was after this over when the rain got heavier. It got to a point that the Sharks had to leave the field. The Wombats wanted to finish the game and determine the victory on the run rate, which was at their side. However, we managed to keep playing after the rain died down. After the rain, almost poetically, the Sharks started to fire back with the skipper getting two wickets and bowling very tight. With Pav bowling, Patmore offered one false stroke in the entire inning and ended up caught at square leg. Kav was the last bowler who bowled 6 overs at a stretch giving only 16 runs and getting one wicket. Suddenly, Wombats found themselves 160-9 with two overs left in the innings. The pacers could not bowl as the pitch was slippery and would surely lead to injuries. Dhugal, Kav and Pav bowled very tight but the last batsman managed to find a gap and secured another Wombats Victory.

The main reason for our loss was the amount of extras. We gave 60 extras! We had Wombats beat if it weren’t for the extras. It was a first-class effort by the Sharks who have to bear an unfortunate loss at Fuji. We have one more game against them in the season where we will surely win!