The plucky Chiba Sharks 2s faced the unbeaten Falcons in the continuing heat, but on the newly opened and gloriously shaded SICG2. T’were the pluck be to thine! Miraculously we actually got an XI onto the field! Some late hands went up! We welcomed Gaurav in for his first game of the season and welcomed debutant Depashish ‘Depa’ Sahoo from the My-Ys cricket factory into the Chiba Sharks family!! 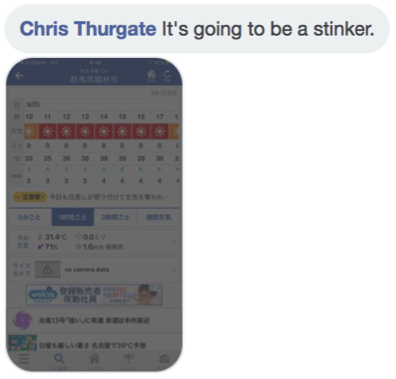 It has been a rough season for the 2s. With a number of new clubs coming in to the JCL (and some starting in Div. 2) and the new third division, it means we are facing more higher quality teams (ability-wise, yeah) and fewer who we can actually beat! Selection issues complicate and even the weather has not been our friend. But you can’t shake the solid culture of the Sharks: like the cartilage of real sharks, we bend but don’t break.

It was incredibly hot, again, and it was shortened to 35 overs. Pre-toss we discussed our opening strategy: bat or bowl if we won. If you are up against it, do the unexpected. We won the toss and bowled.

Imagine our surprise when we went to the middle and found the pitch was slippery and the turfed area on one had several deep puddles, no, pools of water! It was 35+C and we had to keep our new ball dry!!! Huh. (A passing CEO was hailed and after paddling about a bit he apologized and continued on his way.)

We actually had a deep attack and of a variety of bowlers. We were aware of our ‘danger man’, Kuldeep, in the Falcons. Neel and Atharva had their moments but after a set of two each Falcons held steady on 25, generally finding the rope once an over. I would have to say that the wet pitch with its brand new thick synthetic carpet was not ideal for the fast bowlers. Gaurav and Krishna followed. We were giving up a 4, often on the last or near ball of an over. Krishna was taken to by Kuldeep, perhaps needing to refocus after the U/19 games. It was looking ominous as Falcons spurted up to 0-60 after 8. Then we got a crack, and it was a huge one – Kuldeep.

First ball of his third over, Gaurav enticed the Falcon opener to have a full-bodied drive at a good length ball. It flew low and fast between 1st and 2nd slip. There was Awal, who in a pure reflex action, flung his left hand down (he is righthanded) and behind and clutched the speeding pill as clean as a whistle, just centimetres off the grass. It made a such sweet beautiful sound! At short cover, I had the full and close-up view: I kid you not, if ever a Shark took a better slips catch – and I have seen Creece and Doogs at work – then I wasn’t there. It was Steve Smith-like but with opposite hand. It was tremendous! Unfortunately, a pumped up Gaurav did not press the clear psychological advantage. 1-68.

With their main run-banker gone, things evened up a bit and it showed. Next over Krishna got his reward for a better line, bowling the other opener. 2-69 and we took drinks at Over 10.

We were becoming the ‘third batman’, however, as wides piled up and that one loose ball an over hurt, but that said, the bowlers we looking more likely, too. Awal teamed with Krishna for a couple. Scoring slowed somewhat, and Captain Neel threw the bowlers around to unsettle. It worked as our next break came via the returning Atharva. A mis-hit traveled high out to Depa behind square and the young and very very quiet new Shark held it without fuss, or any emotional at all, really. We were very happy for him and us!! 3-100 off 15. KB had a go and was also guilty of having unattached spheres, but there was also turn and edges flew on the new green mats. The ‘LBS’, or ‘Loose Balls Syndrome’ was catching; we, however, were not…! Awal again and a single over from Kav saw Falcons 3-126 at 20.

After a big ‘gee-up’ from the vice captain at drinks, Awal and KB continued and the brakes went on. Awal’s good line resulted in an inside-edge bowled (4-131). KB should have had a scalp but the top edge went down. Boundaries had dried up (which is more than we could say for the puddles) for the spell, but on the other hand, given ‘lives’, the No. 5 and 6 consolidated to turn the game away from us, despite the efforts of our return top three bowlers. We were wilting and wides plagued again. 4-176 at 30 and if we were not careful and focused it could get very ugly in the final five overs.

Fortified with water and words we girded our soggy loins for a mini 5-over battle. With wickets in hand and two set batmen we could expect the Falcons to go at us hard. To our great credit they did not have it their way. Again we hit back immediately after drinks. Gaurav recovered from wooziness to separate the well-set No. 5’s stumps from terra firma. 5-181. A well-rested Atharva, with Neel in support, then cleaned up 7 (bowled) and 8 offered up the easiest of chances to Awal at point. Sadly we were required to bowl a whole extra over in this last stanza. Atharva nailed his fourth wicket, the frustrating no. 6, with Rubal this time holding his nerve and a skied catch at mid off. Only in the last over did Falcons pass 200.

Early damage was done (the openers combined for 10 of 21 boundaries), but we did pretty well to keep most scoring shots to singles. But, let us be very honest here – we sent down 30-odd wide balls, some with ‘change’, gifting the batting team 38 runs and an additional five overs in a 35-over game. That is like ‘bowl 7, get one free’. That hurt us and wore us out mentally and physically. We had one catch taken that should not have been and one that should, so that evens it out. We made 200 as a losing score this year so 204 to win was not beyond us. 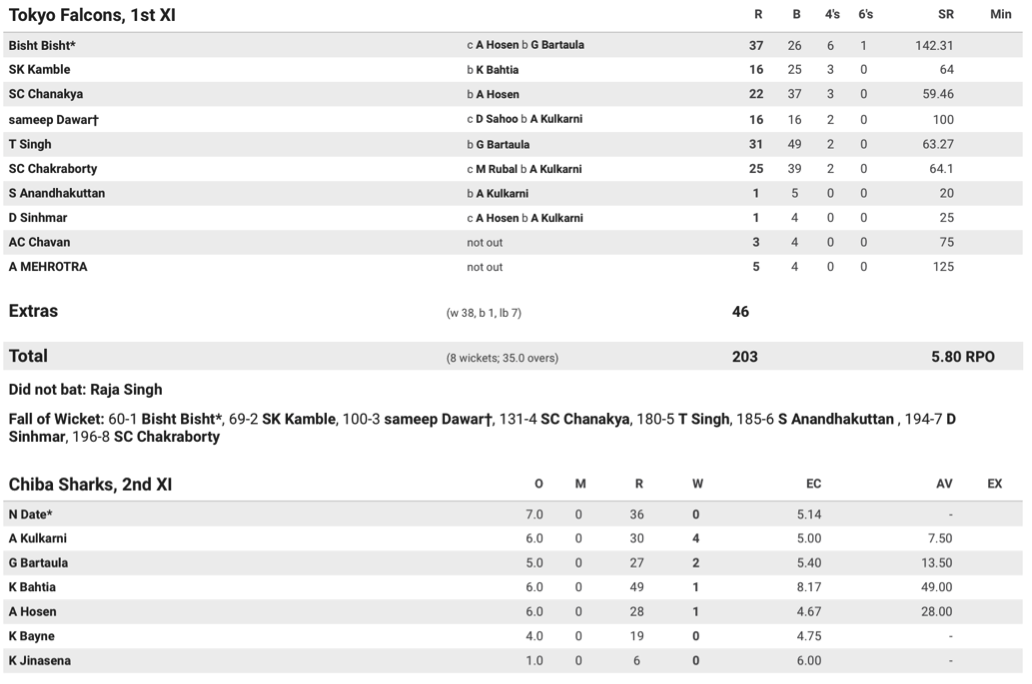 Our batting did not scream, ‘RUNS’. It screamed, ‘We need a lot of luck!’. Falcons boast three bowlers in the Div. top 10 wicket-takers. We would need luck and application and daring.

Neel dropped himself down the list and Kavin and Gaurav teamed up to face the Falcons. The two soaked up the early pressure, but this lasted only four overs, but included a beautifully-timed leg glance from Kav. Gaurav bowled, 1-13. Rubal in and although nowhere near as pretty as Kav he was effective. Kav was looking the goods: head over bat, all the time in the world to play and he was moving his feet! All this was familiar to those lucky enough to see his wonderful 60-odd. Falcons rolled out five bowlers in the first ten overs (but two key players bided their time). Rubal has an almost non-existent back lift but strong wrists got two balls to the rope. Kav meanwhile was looking like Osaka Castle: big, and solid and green on top. He did something he apparently had never done before. He greeted both of Kamble’s two overs with mighty, full-arch blows down the ground for 6. If Rubal could stick and Kav keep going we had a chance. 1-47 at 10-over drinks. 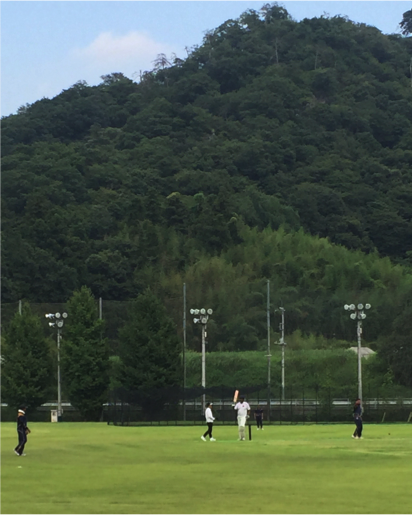 Having sensed the same thing the Falcons went to their main bowlers with results. Rubal was trapped LBW (2-52). Atharva may have psyched himself out of a score and was soon gone (3-55). Kav meanwhile calmly and stylishly knocked the ball around, calling and running with confidence. Depa was tossed into the deep end at No. 5. It did not faze him and he took one ball off his hip for a classic square pull for 4. But it was literally boys vs men and Depa was back for 9 (4-72).

We needed someone or some two or three to stand with Kav. Neel walked to the wicket. This was probably our last chance at a long partnership. It was snuffed out, LBW. CT entered the fray and Kavin proceeded to protect his mentor over four overs. An exhausted CT (had umpired 2 x T20 on Saturday) holed out (6-94).

The heart ripped out of the Sharks batting, the Falcons reverted to bowling tripe. If we wanted a carrier for LBS we found him. He, however, had difficulty find the pitch (which strangely did not seem to bother the umpire once or twice). Kav took him to the ropes a couple of times and passed his 50!! But in a world where Agent Orange can be president, Kav can be caught and bowled after such a delightful innings. Great knock!

At 7-97 we might usually say that it was a matter of balls rather than a matter of time. Not today.

Awal had joined Mairaj, who, returning from both New Zealand and injury (unrelated), had other ideas, and they involved smashing a cricket ball. Here is CSFB:

These were off our main tormentor with the ball, not the stuff at the other end. But, as it suggests, Mairaj was not run out by a mile, repeat, not, and a country one. Awal had already succumbed, caught, to the sweet siren’s call of T. Singh. Filling in the bowling figures on the scoresheet was like trying to push an oyster into a keyhole (and try reading it!).

No offence to either of those great swaggering English artisans of swing.

Mairaj’s 11 off 6 and a set of overs that in the book looks like the closing scene in ‘The Life of Brian’ had taken us to three numbers which read 9-115. KB had had enough and walked to the wicket.

A head high not called full toss was clipped for a single. The professional No. 11 unwrapped a few shots to the leg rope only he knows he knows he knows how to play. Krishna tapped in a few and the wides mounted (or not). Unfortunately as CSFB put it: 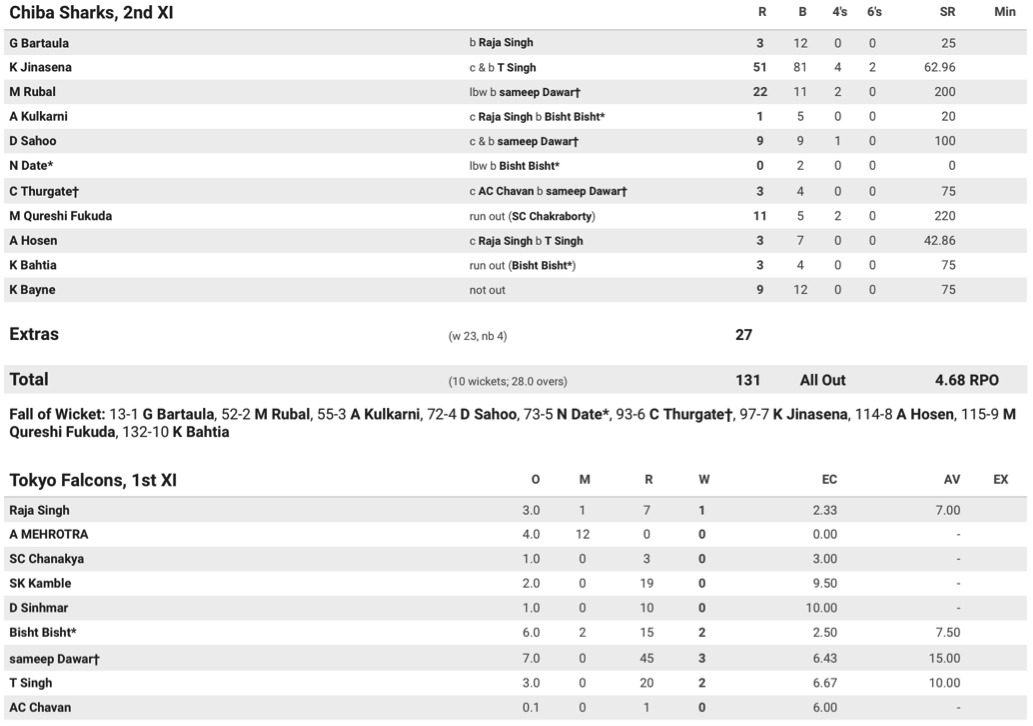 This is a hard one to describe. Yes, we were not disgraced. We fought it out and landed punches on the top team. At the handshake a senior Falcon expressed they were concerned. There were some great highlights: Awal’s catch, Atharva got 4, Kav another 50 to his name, we have a new Shark in Depa, some lesser lights lit up for a bit with the willow. But I have described aspects of our bowling and fielding we can control. The wetness of the pitch and surround was a totally ridiculous distraction out of our control. We needed to build around Kavin’s mighty effort.

Bitter sweet. Yeah. And a bloody melted one. 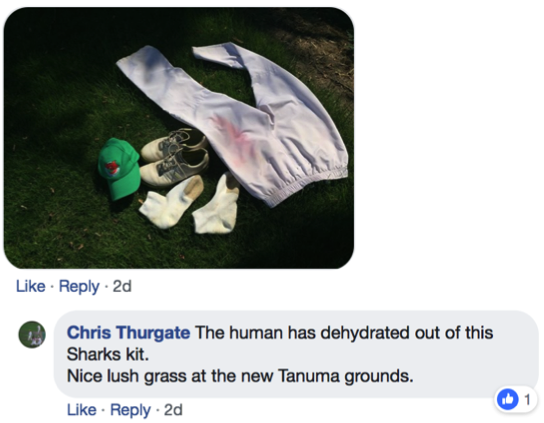 We have one more game against Men In Blue and oh oh oh would I love us to beat them.