It was hot and as usual as expected in Tatebayashi as the temperature was reading 37 degrees at 9:30 AM in the morning.

Both the openers took their time adjusting to the hot temperatures and a wet out field (sounds crazy but that’s Sano). Tommy took his time at the crease in his unusual way and later surrendered himself for a simple catch. After the fall of the first wicket, we had our in form all-rounder Pave who was out off the first ball, According to him it was his “First Golden Duck in JAPAN”. Actually, this record is slightly off from the CricHQ scorecard where Pavethy was out slashing at a ball outside the off stump to get a thin outside edge to get caught behind rather than a C & B. Next in was our Rising Star Takady who once again like Pavethy got a unusual bounce and was caught well at slip trying to cut a ball from a leg spinner who turned out to be their most valuable player of the match. 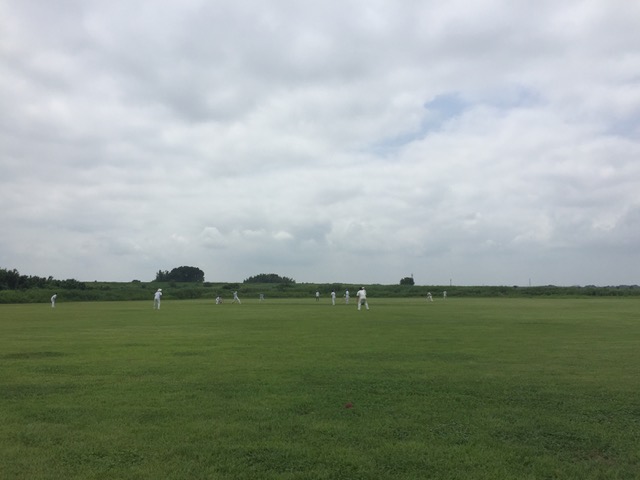 Then with the lack of support from the other end, Dhugal was trying to accelerate the scorecard and was stumped in the attempt. Followed by Our Sharks Mr Dependable Asala who had the most opportunity to capitalize on the balls he faced but had to return, getting bowled by the same left arm spinner.

Marcus was also bowled by the same leg spinner who bowled a very short ball which Marcus tried to pull hard and ended up getting a bottom edge back onto the stumps. Soon the middle order including Marcus, Adit and Rui were all bowled by some mediocre deliveries, showing the lack of experience and concentration.

Neel could hardly contribute to the scorecard with his technique and was run out as the non-striker trying to take a quick single from a ball which Krishna hit to short third man. New player Praveen hit his first Sharks ball for a four over mid on off a half volley but was caught at mid wicket because he tried to do the same thing to the next ball and it went straight up in the air.

Sharks total was 69. Top scorer was Dhugal with 13 runs.

Defending a very small total, both our openers Rui and Adit got an edge over both their openers and then there was a 50-run partnership for a 69-run chase. Takady and Tommy were the first change of bowlers with no luck and then Neel could finally break the partnership with his first wicket for first’s but then the next pair finished it off easily, hitting debutant Praveen for two sixes from his first two balls, which were both short balls hit to the mid wicket boundary by the left handed batsman Dhaka.

Finally, a dehydrated Sharks campaign ended up once again on the losing side, giving up the hopes of a Semi Final Berth.