I thought a somewhat curious air surrounded the Super Seconds opening match of 2017. Our regular Skipper Chris Thurgate was otherwise engaged at graduation ceremonies, as was the talismanic KB. Meanwhile several players were returning from the hinterland of sabbaticals – Minami, Gaurav and Adit. Added to this, our ground had been switched to the seldom used Sano 4 due to “pitch maintenance”(at the beginning of the season???). An unsettling set up, made all the more jittery by the fact that we would be opening up against Fuji Far East, a team who we beat by just 2 runs last term in an absolute nailbiter of a match.

However as we piled out of the cars at a resplendently sunny Sano River Ground the mood quickly settled into one of familiarity. Hands were shaken, new bats unsheathed and nods given as the ropes were laid around the stubbly turf. Stand in Skipper Sankar did the meet and greet with his complete team sheet while the rest of the team wheezed and croaked through a very light warm up. 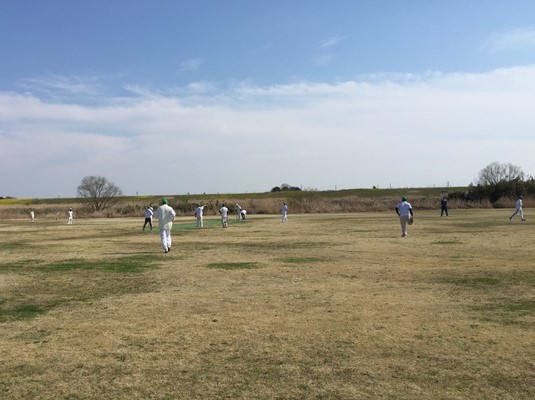 The toss was promptly lost and we were put in to bat. Off the back of some reasonable form last season I was given the honour of accompanying the ever reliable Murad bhai out to the middle. After a couple of decent batting sessions in the off season nets I was really looking forward to getting started. Having hit all of my throw downs (a 1st!), sporting new gloves, a new bat grip and a new box, I went out to the middle unusually full of confidence. My bat swung through the air with precise intent, practicing the shot I should have played as I walked back a few balls later having sent a dolly catch off a full toss to the man at shortish mid-off. 2 for 1. Not a good deal today.

No worries, the ever dependable Sankar quickly got into stride, his busy defence keeping out a few that kept low. Just as he looked settled he had a swing at a short one outside off. Sankar didn’t look to have fully committed to the shot and the ball seemed to sense this, arcing high into the air, seemingly bound for the deep extra cover boundary…..but then….pausing….and…dropping listlessly into the paws of the backtracking Hirano off the bowling of Ono.

Oh no indeed! 16 for 2 and one of our best batsman back in the hutch (and Sankar too…ahem). Thankfully Murad was unfazed, playing sensibly and effectively to keep the scoreboard moving amid the carnage. The Ides of March had turned into the Wides of April and a few 10+ ball overs helped the Shark cause.

Sayeed, batting in his proper place at four, had a look at a few, decided he liked what he saw and launched a classic firework display. The big hitting Bangladeshi timed some booming lofted drives out to the ropes and then turned the gears up one more. Two 4s were followed up by two 6s in an over where the batsman and bowler seemed joined in a state of perfect symbiosis whose only function was to send Japanese University students deep into the undergrowth to search for lost balls. Murad too was now timing the ball sweetly and cracked a couple of effortless 4s across the deck, back towards the scorers’ tent. He was looking good for a 50 at the very least.

Inevitably the game slowed as the bushes got a good trampling and this gave us time to verify the scorebooks, count Murad’s score, do some washing etc. Sayeed looked in imperious form with genuine cricket shots on parade. It was only right that he should get out in equally spectacular fashion, cutting late and hard through the gully. The FFE man there, Nakagawa, made an instinctive dive to his right, got both hands on the cherry, and kept them tight as hit the deck. He got up nonchalantly (as players always seem to do after an unbelievable catch) and tossed the ball back to the umpires as his ecstatic team mates hi-fived and patted him to death. The Sharks bench, well known for their deep understanding of quality fielding, were on their feet applauding the young fellow’s superb catch and consoling Sayeed. Absolutely “sho ga nai”.

Surprisingly, Limo lasted least of everyone with a 2 ball LBW. He suggested it may have been missing leg but the umpire had the best seat in the house and raised the finger of death. A great shame as when Limo gets in the scoreboard needs two people on it. Murad however soldiered on into the 40s with another controlled cut over the ropes. Molloy and Gaurav joined him and played in very similar styles – attractive, cultured technique but poor value for some excellent shots as despite the sunny weather, the outfield seemed to be getting slower and slower. Both got their marching orders from good balls with Molloy edging behind and Gaurav not closing the gate in time. 98 for 6 with only Murad still out there as a recognised batsman. Eyebrows were being raised and mmmmm’s being offered at the prospect at getting even 120. It was only the welcome return to life of the wides column that pushed us on again.

Mairaj came in next for a brief rendez-vous with a straight one onto the pads before Murad played his first false shot into the gloves behind for a great knock of 49. A shame that he didn’t get his half ton but it was certainly one of the best 49s I’ll ever see.

With the extras still coming at a good rate Terry did exactly the right thing and anchored down at his end, watching some quality skip past the off stump and wearing a few that stayed straight. The bat face saw action as well and before long Terry was running well timed singles with Minami. Young Kentaro has lost very little during his year out to prepare for Uni entry (well done by the way – Keio!!) and cracked a few through the gaps behind until he miscued a slower ball back to the bowler. Terry meanwhile was holding out grimly as Adit, our last man in, went through his repertoire of leg flicks and deft cuts. It can be very disheartening to see this kind of quality come in at 11, especially when it leads to a last wicket partnership of 36! Terry finally let one through to his woodwork to bring matters to a close for a better than expected 164 a.o. with just 28.2 overs played.

A bowling firestorm was needed. We’d need to get them all out, no two ways about it. If FFE kept their wickets upright then the run rate would take care of itself and victory would be theirs. Sayeed donned the Keepers gloves and Sankar chose the Removal Man, Adit and Gaurav to lead the attack. Both set about their task with gusto, bowling with pace that clearly had the FFE openers chewing bottom lips. Adit swung the ball around just missing two or three edges an over. Gaurav’s heady pace caused his line to suffer once or twice but he got Shigemori with a jaffer that took a sharp edge to Limo at 2nd slip. 7 for 1 and just the early breakthrough that we needed.

Nakagawa and Ono then battened down the hatches, riding their luck once or twice, to see off the opening bowlers. Sayeed was kept busy, throwing himself around behind the pegs and keeping the noise levels at good volume. Both batsmen clearly had a good eye and although neither was a big hitter, both made frequent contact and liked to run. What we considered suicidal singles were plundered again and again as the FFE youthful spirit left the more ponderous Shark response lumbering in the dust. Our fielding wasn’t bad. It just seemed to take too long. 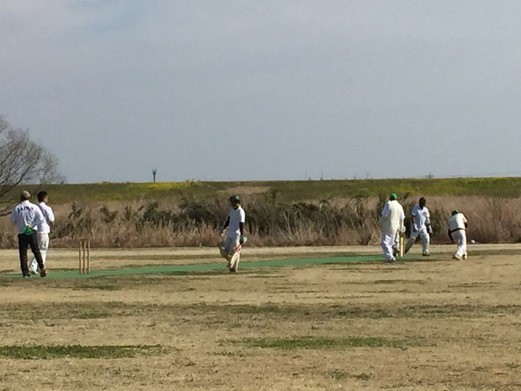 Minami struggled with line and length early on but occasionally found perfection in both leaving the batsman bemused. No wickets though. Surely Molloy would find a way through. His leggies were a revelation last season and they seem to have lost none of their venom. I don’t think the batsmen had ever faced quality leg spin bowling and frantically offered each other hopeful rather than meaningful advice as the ball ripped past outstretched pads and withdrawn bats. After holding out well both Nakagawa and Ono fell within quick succession of each other to the Kiwi spinmeister, the first being clean bowled by one that didn’t turn and the second edging a fine one to Sayeed behind the stumps. 48 for 3. Good enough for FFE but the Sharks could smell blood. Keep the pressure on now and we’d be OK.

The two new bats, Nakama and Ueda had different ideas though. Ueda whacked a couple of lusty blows through cow corner, just evading Molloy’s hands and Nakama had a fruitful cut shot in the kit bag. In addition, both ran like gazelles and it seemed that these two might do enough to get FFE within reach of home. As the FFE scoreboard approached 100 Sankar knew we only had a few rolls of the dice left. One of these rolls landed on Limo whose fruity loopers brought the batsmen forward only for the ball to rear off the pitch and bounce past them. One such pie made Nakama peckish and he pounced forward, missed and left Sayeed to clean up his stumps. A big, big wicket that as it left Ueda to bring the tail home.

He decided to get the remaining 50 or so runs as quickly as possible. He middled Molloy over deep long-off and tried to repeat the dose a few balls later over deep long-on where Murad stood stationed like a statue, eye on the ball, as it looped in towards him. Into the hands it went. And there it stayed. An expertly taken catch given the importance of it.

The tail scrapped around for every run available, running almost every time they made contact with the ball. These were tense times indeed. The fielding was tight, Terry and Mairaj both putting useful body parts on the line to cut off 2s. We winced at every wide as the extras column ticked over and the target slowly but relentlessly came closer and closer. There were boisterous sighs of relief when Adit’s quality and focus picked up a couple more scalps but credit has to go to Gaurav for his merciless display of death bowling. Two inswinging rippers ended all hopes, each wicket greeted with a fulsome roar from the Nepalese paceman. The plucky FFE resistance stopped at 146 in the 30th over.

Even though the match looks tight at a win by 18 runs, in reality it was a lot, lot tighter. We never felt we had the game won until we were shaking hands at the end. It showed a lot for the Sharks spirit that their belief remained strong. Great credit must go to Fuji Far East though. Their fielding was absolutely flawless, their running between the wickets was relentless and their comportment was a model to all other clubs in Japan. Good luck to them for the rest of the season.

Many thanks to our umpires Shun Hashiba and Ayuki Sunaoka who had a great game. All bodes well for another hugely enjoyable 2nd XI season. Next stop is Paddy Foleys. That should be fun.