On a sunny but cool Sunday morning, twelve hungry Sharks made their way to Sambu-no-mori to face off against last season’s East Kanto representatives, the Men in Blue in our first Japan Cup game of the season. There were big names missing as the 2nds game was simultaneously going on some 150-odd kilometres away in Sano. The pre-match atmosphere was one full of questions—how would a young team (six players under 20 years of age) fare against a side that, on its day, could give even the best side a real pasting? Could the new Japan Cup captain Navin live up to the high standards set by those who preceded him? The match promised to be a thrilling affair.

It all started on a merry note for us, with two new players—myself and Anand—being handed the coveted bright green caps bearing the sacred team badge. Anand very sportingly took on twelfth-man duties. Skipper Nav broke the Sharks tradition and won the toss for a change, opting to bat first, presumably because of the big names in our bowling attack. “110-120 would be a good score,” we were told, because of the sluggish outfield as a result of heavy downpours overnight and the unpredictable nature of the Flicx pitch.

After the pep talks were out of the way, the captain himself, accompanied by the ever-dependable Muneeb Siddique, made their way into the middle. The fourth legitimate ball of the innings was a juicy full toss, which Muneeb absolutely whacked… straight into the air, with the fielder taking a relatively straightforward catch. 2/1. It wasn’t to be for Muneeb today. This brought Takady to the crease, coming back from a stint with Mt Waverley’s CC in Australia, which is also the former club of a certain Mr Bedingfield. However, our charismatic 1st XI captain wouldn’t have been proud of his protege’s dismissal, with a straight ball going through the gate to disturb the timber.

Unperturbed, the skipper continued his job, with his trademark cover-drives and exquisite dabs into the gaps, forging a decent partnership with Marcus, before the latter hit a boundary and a double before falling while looking to score quickly. Vicky, Kavin and Takuma came and went, and the disciplined MIB bowlers continued to build the pressure, following which the hard-hitting all-rounder Vivek strode out to the middle. Him and Nav played sensible cricket, rotating the strike and putting away the bad balls, while also eating up the wides, with a big shot off a free hit off the willow of Viv landing just inside the ropes for a one-bounce four, reminiscent of another big man by name of Viv who played for the West Indies in the late 70s and 80s. 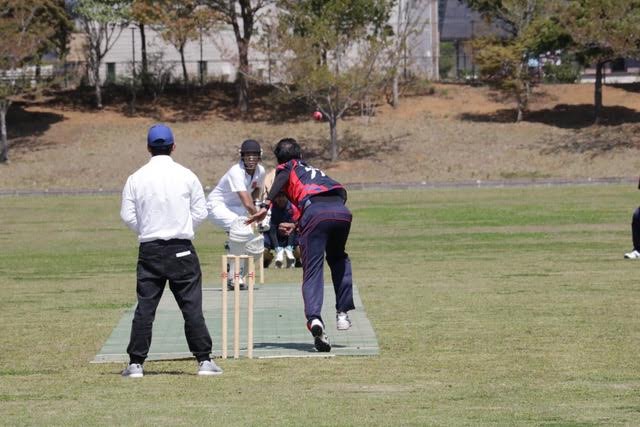 However, against the run of play, Viv departed seeking to up the ante, and when the captain perished too looking to do the same for a well made 26, the score stood at 74/8, with four overs still left in the innings. It was unclear whether we would even last our allotted quota of 20 overs. At this critical juncture, I walked in with the bat, having been told to take all the runs they were offering us for the remaining 24 balls. The first ball I faced was a ripping inswinger that thudded into my pads, but to my relief, the umpire thought it was going down leg. Under the brilliant guidance of Mahesh at the other end, I looked to do the same thing that Viv and Nav had done earlier, and with a bit of dexterity and a bit of luck, scratched my way to an unbeaten 20, with the largest partnership of our innings taking us to a score of 101/8 with 12 runs coming off the last four deliveries. The total was perhaps a tad below par, but by no means a paltry amount. Although Mahesh faced only 3 deliveries, he was instrumental in setting up the charge at the end, forming an integral part of the partnership of 27.

The questions, though, remained. Would we be able to defy the odds and defend the total? Did we have it in us to keep up the intensity for the second half of the game?

We needed to strike quickly, and Viv was given the brand new cherry to spearhead this task. MIB sent the left hand-right hand combo of Kartik and their hard-hitting skipper Guru to open, to which Viv responded with an excellent maiden. Mahesh too looked dangerous with his offies, but six good balls were followed by only ‘oohs’ and ‘aahs’, but no breakthroughs. Viv struck in his next over, with Kartik offering a simple catch to Takada which was gleefully snapped up. Two more wickets soon followed, and with the score at 11/3, we were definitely in with more than just a sniff.

However, the partnership of 33 for the fourth wicket, the highest of the match, frustrated the Sharks, with Sanket looking particularly threatening with the bat. The two spinners Mahesh and Takady were economical, but could not get through the tight defences of the two batsmen. However, the drinks break after ten overs shifted the momentum back in our favour, and Muneeb quickly broke the partnership, taking a catch off his own bowling. The rest of the attack complemented him well, and another wicket soon followed. After 16 overs, with 28 runs still required with only four wickets in hand, we definitely had our noses ahead, largely due to some aggressive bowling by Muneeb, Vicky and Navin. But while Sanket was still there, the possibility of a comeback from MIB could never be eliminated.

What unfolded in the space of the next dozen balls was an epitome of the uncertainty of the result of a Twenty20 game until the very end. The pendulum swung again, and unfortunately for us, this was the last time it did so. The two wickets we picked up after that, including the prized scalp of Sanket, who made an elegant 36 off 31, proved to be mere consolation when you looked at the bigger picture. In the end, MIB tail wagged vigorously enough for them to make it home with an entire over to spare, and we started our Japan Cup campaign with a loss.

Nevertheless, plenty of positives could be taken from the game. Navin was extremely proactive in his Sharks captaincy debut, which is a good sign going into the next few games that we have in this season. Takady and Muneeb’s diving stops were worth remembering, Marcus was his usual self behind the stumps, chirping at the batsmen when necessary and backing it up with his amazing takes, while all the young players learnt a lot while also gaining a memorable experience. Personally, I thought that the fielding standards, as well as the intensity on the field were on a higher pedestal as compared to the junior levels. I hope to continue to play for the Sharks for as long as possible, and in doing so, take my game to the next level.

A tremendous thanks goes out to the umpires, MIB players, supporters and to all others who made the match possible, as well as my new teammates, with whom I feel I have already developed a sense of camaraderie. Next up, the Rising Stars on May 20.