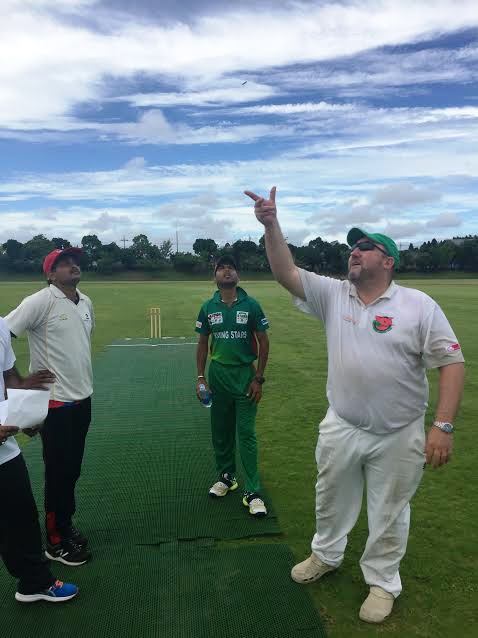 In the end this match was a dead rubber. Chiba Sharks had endured a very disappointing Japan Cup and the Rising Stars were put out of the finals running by the rejuvenated Men In Blue’s surprise morning win over Tsukuba. But, with the Stars fielding four Sharks in their line-up there was a lot of pride on the line. Both teams wanted to finish with a win.

Chris won his second (!) toss of the weekend and what an iconic one it was – he chose to bat on a flex-pitch that was, literally, breaking up.

Batting, allegedly
And with that we put in a batting performance that summed up the team’s T-20 season. Imploding. Boasting the likes of willow-wielding heavy-weights Lollback, Prodhan, Sancheti, and young guns teens Thurgate (M) and Siddique, our batting looked good on paper. Trouble was we batted like over-used tissue paper. Dave and Sankar set us up quite nicely, though, putting on 27 in four overs before Sankar was deemed to have tickled one back to the ‘keeper, Sumon. Navin joined Dave and they then doubled that score, with Dave striking the ball nicely and both taking advantage of some wayward extras. Nav started to string together a few 2s before things went totally pear-shaped – more butternut pumpkin shaped really.

Anyway, we got thoroughly baked, losing 6 wickets for 7 runs. Sumon snapped up Nav who went boogie-ing down the wicket, Dave holed out, Vicky was run-out first ball, Kav looked out of sorts and was caught, Terry defended grimly but got castled and Muneeb became the second run-out victim from a direct hit by Hasnat. With Marcus watching forlornly at the non-strikers end we collapsed from 1-53 into 7-60.

He too popped off LBW and at 8-71 KB joined Sanjeewa, playing his first game of the season. Picking up singles, accepting extras and being circumspect they piled on 13 runs. KB became the third run-out of the innings, failing to beat a throw in after a spilled catch at point (live and learn – eventually).

Sanjeewa had held up his end gamely but with only two runs added CT at 11 departed rather too quickly. 86 the final Tally. Three figures at least would have been nice and in the very crowded pub of Shark collapses this one elbowed it’s way right up to the bar. Rony (of Wombats) and Taluqdar both picked up three wickets and Sumon was involved in four dismissals. Heavy rain throughout the week slowed the already wide expanses so scoring wasn’t easy. Still, we had some potency in the bowling ranks so it was still game on.

Bowling
We got off to a flying start! Muneeb’s pace did for one opener and rattled his stumps 1-1. If there is a better ‘pick-up-throw-down’ wicket taker than Sankar in the JCL then I have not seen him or her yet. In this case he had one stump to aim at and still hit middle! 2-8. Vicky got his swagger’n’swing going to catch the other opener in front and in the blink of a eye we had Rising Stars 3-15.

It became an all-Shark field as it was left to Sumon and Sayeed (FSIJ) to dig Stars out of a hole. And, with some slices of luck, they did. Very quickly Sayeed showed both his intent and signature shot, blasting a couple of 4s down the ground. Sumon was content to support and give over the strike in singles. Early in his innings Sayeed survived a chance off Sanjeewa that sliced over backward square which KB cavorting back could not hold on to. It was pivotal. The pair added 51 for the 4th wicket. Returning Vicky finally sent Sayeed back with an inswinger whistling off his pads and into the stumps. This had them at 4-56 in the 12 over (we were 4-56 in the 8th) and set off the Stars own collapse.

Muneeb and Vicky put the brakes on but Vicky went further with two wicket in two balls. The first was a great C&B, the ball lobbing up and Vicky diving low and forward, getting his big mitt under it. He then blasted one straight through the next batsmen and there was wood everywhere. His next two deliveries screamed past edge and stumps. Stars wheels seriously wobbling at 7-68.

After some false alarms KB got his hands on the ball. He removed the stubborn Sumon with his first ball – Vicky taking the easiest of catches at mid on – to make it 8-69 and he must have come very close to taking out Murad LBW. Dave had been on the money and was rewarded with two wickets is his last over, catching Kabir in front and then Murad behind the wicket a la Sankar!! This left Stars at 9-70!! (If we had stopped the game there we would have won!) Hard-hitting Hasnat (yet another Shark) remained between us and a memorable win.

Three overs to go. 16 runs to get. With Muneeb, Vicky and Dave bowled out (Kav had taken a bit of stick in his one over) it was left to KB and Sankar. KB held them to 4 runs, then Hasnat took to Sankar a bit. KB had the honour of the last T-20 over of the year with Stars needing 4 runs. KB’s ‘you-miss-I-hit line’ unfortunately did not pay off and the last few runs were taken with three balls to spare.

So ended both teams’ T-20 campaigns for 2016 (a play-off for 3rd in East Kanto could not be arranged) but this was a great game. Clean hitting from Dave, Sayeed and Hasnat. Four terrific runouts. Some good catching and ‘keeping on both sides (Marcus was sublime down leg). Desperate fielding from Muneeb in the deep all day. And Vicky’s 4-11 was delightful.

Neither side will feature in the finals or Japan Cup weekend, which is a shame. The Chiba Sharks did well with the ball (apart from our first Tsukuba game) and our scores did not reflect our potential. That is the price of the spreading of Sharks across the Japan Cup Teams like a Sharknado, a “comedy disaster” (Wiki), but without the teeth. Unlike the movie, no sequels are required. Let’s look to 2017!!