It was so sunny that I nearly forgot the word ‘rain’. Feeling as if you were seconds away from melting, who would you expect to see at the station? Yes, Koji Watanabe! He came back from Australia for a short vacation. It’s always nice to see a Shark coming to watch a Sharks match even though he isn’t playing.

To play against the Rising Stars, which includes some familiar faces, our team was (in batting order), Sankar, Anton, Marcus (wk), Dave (c), Chris.T, Mairaj, Rui, Mahesh (first game for Sharks), Vivek, and Kavin. As you could see, we only had 10 players. Moreover, we had just 8 at the beginning as some came late. Given the situation, skipper Dave wanted to bat first, but unfortunately Sharks were sent to explore the field. 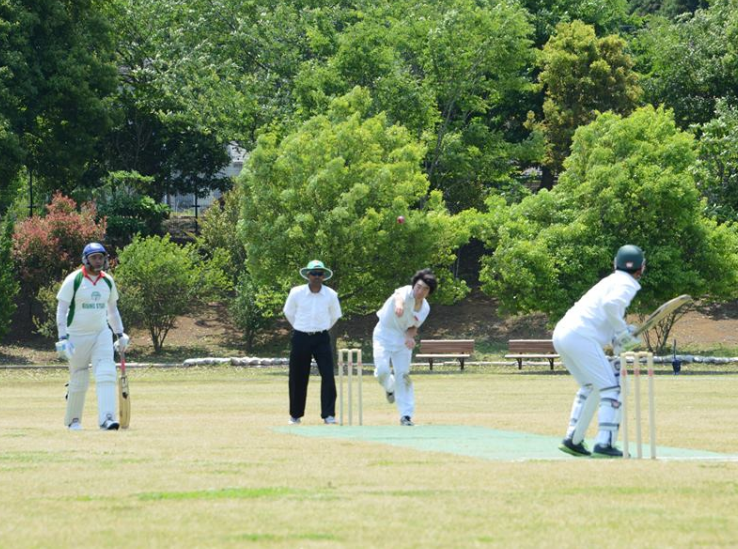 Because the ball won’t bounce as the batsman expects on the Sammu Flicx pitch, our plan was to bowl a touch shorter than usual. Dave threw the new cherry to Rui to start, but he couldn’t follow the plan as his lines and lengths were messy. From the other end, Sankar did a good job getting the ball spot on and keeping the batsman under pressure. However, the Rising Stars openers looked patient, respecting the good balls and going big at the bad ones, so the run rate kept high.

Sharks debutant Mahesh came on as first change. He also kept the lines tight and made the batsman struggle with his beautiful off breakers and changes in flight. The first breakthrough came as the batsman became frustrated with the questions Mahesh was continually asking and tried to launch one but instead got expertly stumped. I have played with Marcus quite a long time, but I think that was his best stumping. 1-39.

Dave bowled neatly as well, showing an example where to bowl. 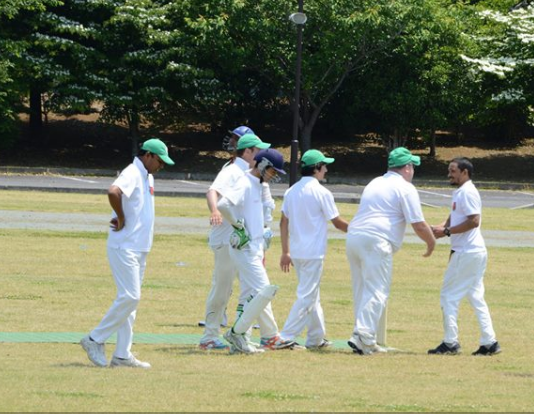 Soon after Dave ran out the other opener, directly hitting the middle stump. 2-41. It was the skipper again who got the third wicket for Sharks, as he made the batsman nick one through to the keeper. 3-59.

But after this dismissal Rising Stars created a good partnership, punishing the bad balls and running between the wickets well. We needed to change something to stop the increasing run rate, and what Dave did was to take the pace off. Anton, who made the batsman hit in the air several times, got Sayeed to go aerial to long on. Fielder Mahesh did everything right, taking the catch comfortably. 4-101. This gave the Sharks a boost.

Sankar again bowled beautifully in his second spell, and trapped the batsman before the stumps. Next ball, against the new batsman, he did exactly the same thing. It was just like watching a playback. So, Sankar got two in a row bang-bang and the score became 6-103. 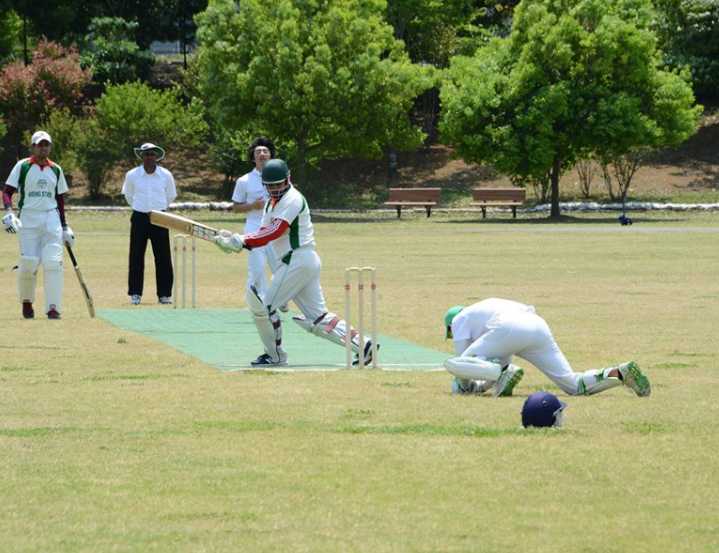 Then came CT. As a captain, when you pass the ball and ask someone who isn’t really a bowler to bowl, you expect him to do something magical. That was what exactly happened. Chris’s off spin made the batsmen pensive and created consecutive dots keeping the pressure on them. He finally found one going through the defense, knocking down middle and off. His admirable bowling went on until the last ball of his over, creating a stunning wicket maiden.

Toward the end of their innings the tails of Rising Stars went up to get a big score, but our skipper continued to show how we should bowl and field by knocking down the stumps two times, once bowling and once running out the batsman. That meant their final score was 9-166. 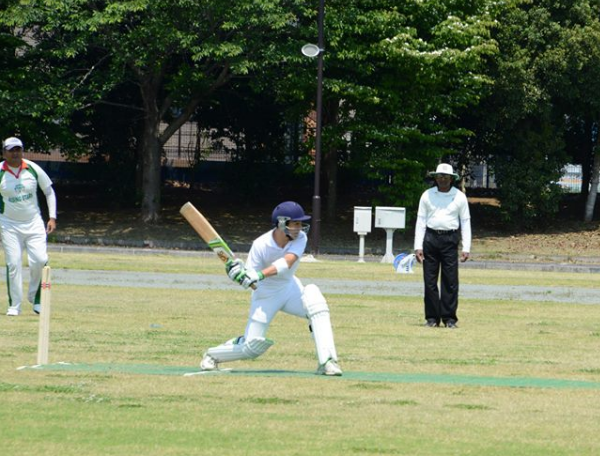 Chasing over 150 is never easy, and we needed to back ourselves and be aggressive, but we also couldn’t afford to lose wickets. Our openers did just what we needed, as both Sankar and Anton played calmly by combining singles and few boundaries. They took us to a great start a looked as if they were going to bat through our innings. Rising Stars showed excellent sportsmanship, withdrawing an appeal that was initially given run out; Stumper Sumon explained he hadn’t taken the ball cleanly. However just after a new bowler was introduced, Sankar hit one in the air and got caught.

Next came the young hope Marcus, and he didn’t fall short of our hopes. Establishing a good partnership with Anton who kept going, he played some beautiful shots, including one glorious late cut. Unfortunately, it was the pitch playing low that made our batsman suffer. One ball skidding through the defense finished Anton’s innings. Dave came to join Marcus, and these two also fought hard to steady the ship, but both of them became victims of the pitch.

We were in trouble as the score was 4-68. Chris and Mairaj came to start the recovery, but Mairaj once again got one which stayed low and was caught before the wicket. Rui went in, and went out. Before Chris could introduce his trademark big hitting, he got bowled by a wonderful ball hitting top of off. Mahesh played patiently, scoring quick singles, but also got out LBW. Vivek in the tail went big, hitting two 4’s and two 6’s, but that wasn’t enough to reach our target, falling short at 121 all out.

Given the situation that we had less players, all the Sharks put everything into the match. Although we couldn’t win, we saw some good cricket in the field, especially from our veterans. The highlights were captain Dave taking two wickets and two run outs, CT getting his wicket maiden, and Anton and Sankar doing good both batting and bowling. Credit to Rising Stars who batted greatly and bowled to good spots, making the most of the pitch.

Finally, take a bow to Chris and Mairaj who umpired the afternoon match on such a hot day, and many thanks Koji for coming!