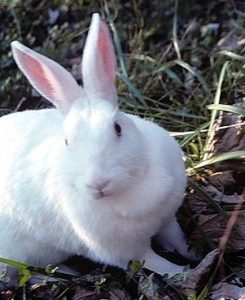 The miserable rain blurred the view from the windscreen as we pulled into the Sambunomori Sports Park. The prospect of a wash out looked as ominous as the clouds that sagged from the sky all across Eastern Chiba. The ground still looked playable but probably not for much longer. We would need a bit of good fortune to get a game on today. We found it in the form of a lucky rabbit’s foot. Even more fortunate, this one was still attached to the rabbit; Sammu’s mythical white rodent trotted out of the undergrowth, twitched his pink nose and the rain stopped.

Other Shark cars started pulling in, players jumped out, bags were heaved onto the steamy grass and the banter commenced. The sizable Tsukuba CC convoy rolled in after a 3 hour drive from up North and it was game on. I could breathe a sigh of relief. The same cannot be said of the rabbit as it was chased for a good 15 minutes by wildlife fan Cameron Thurgate. He got close to it few times but it outhopped him eventually and safely returned to its den by the Sammu gates for a good clean.

On show for the Sharks today were KB, Marcus, Davo, Mairaj, Yu, me, Mahesh, Muneeb and slightly later than advertised Nav, Kav and Viv. Terry gamely turned out as 12th man and along with all the parents, spouses and juniors (playing in the afternoon match) Sammu was fairly heaving with cricketers. Ishimoto san was there to keep an eye on the MY-Ys and CT settled in behind the scorers table with hundredweight of  sandwiches.

Under clearing skies, Cap’n KB won the toss and decided to have a bowl. Last time out we hadn’t seen beneath the surface of Tsukuba’s batting as they beat us by a full 10 wickets. Well we had a bit more heavy artillery in the arsenal this time round so we were keen to give their tail a tweak. 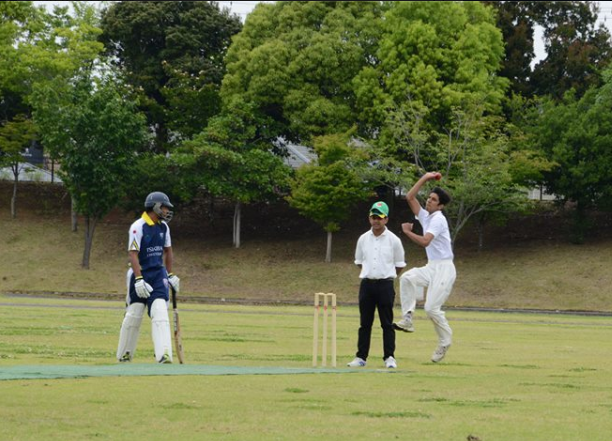 Mahesh, bowling from the Rabbit End, nearly made a perfect start but dropped a bullet sent back to him by Tsukuba dangerman Jayarathne. He made amends soon after by drawing Silva forward with a skidder on a perfect length that whipped past the batsmen’s outstretched leg, into the gloves behind and off came the bales. With the batsman’s toe on the line it was a tight decision but a good one from the square leg umpire.

The runs then dried up for Tsukuba as the rest of the upper order came in and failed to convince against a testing line and length from the bowlers with Muneeb, Mahesh and Viv asking questions of the batsmen all the time.

The pitch also played its usual Jekyll and Hyde role, holding on to a few and then spitting others past the batsmen’s shoulders, even off a good length. They just about kept out of trouble though, playing and missing the quality balls that went past the off the stump and getting something on those that were woodwork bound. Catches came soon with Dave and Viv making no mistakes to see the scoreboard reach 60 for 3 in the 11th. 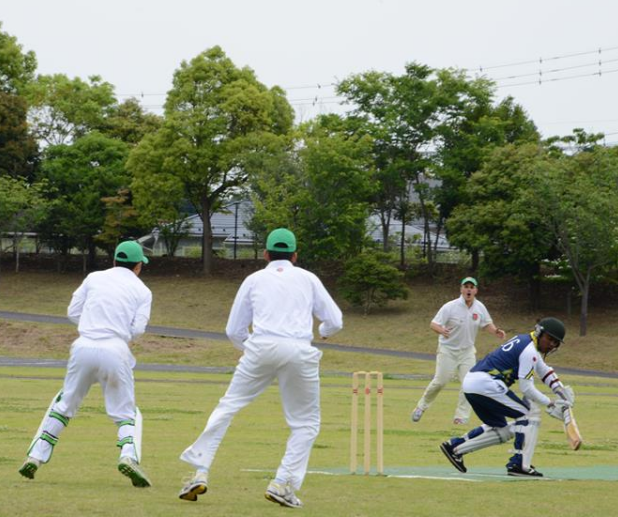 Jayarathne took his full quota of lives playing dangerously through the air but catches were shelled like garden peas. Yu almost kept hold of a couple blasted straight at him at short extra cover while I dropped a relatively easy one running back to deepish mid-on and then made a difficult catch look impossible by leaping into the air one handed landing in a pile of gristle and maroon leather. Jayarathne was in fact dropped no less than 6 times.

Secret weapon time. The K-Binator was activated and ruthlessly cleaned up the middle order in no time, bowling straight and slow, drawing the easiest LBW decision you could imagine. Marcus played a big part too, whipping the bales off again to the chagrin of the awkwardly contorted Tsukuba man. KB ended up with another excellent haul of 4 wickets for 19 runs.

Visibly tiring, Jayarathne eventually got fed up with being dropped and starting swinging like a broken gate. As he played and missed a KB teaser, Marcus whipped off the bails and he was on his way back. The Tsukuba innings fizzled out a bit after that and the 20 overs were completed for 102 runs with 7 scalps taken. A very reachable target if the Sharks upper order could find a bit of rhythm…

Marcus and Navin lead the reply and looked fairly comfortable. Marcus played back a bit when he should have been getting forward given the nature of the pitch, but soon found the boundary with a lusty, trademark pull shot. 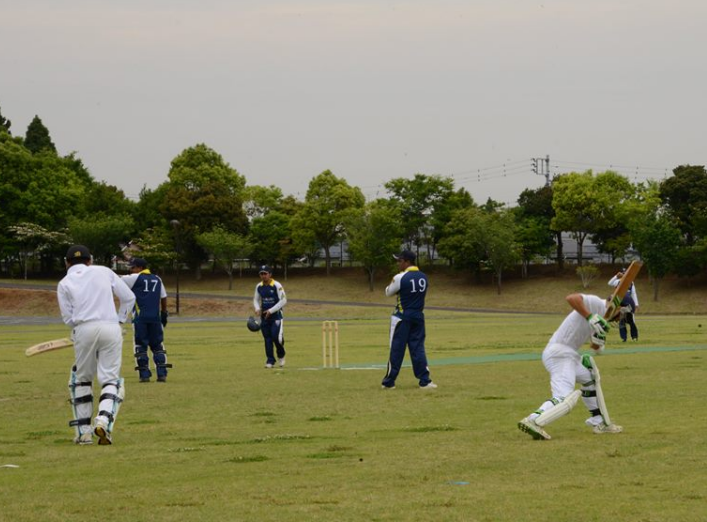 Nav played a sumptuous cover drive that had the scorers’ tent drooling and the Sharks settled back to watch these two young players set about their afternoon’s work. Dear reader, you know what is coming…

The first 3 overs came and went for 15 runs, a par score, but then Nav got into trouble trying to play a rising delivery too stylishly off his hip. He got caught on the crease and dollied the ball to square leg. Marcus didn’t last much longer, undone by a shooter that never got above ankle height. Oh dear. Wickets tumbling and camp Shark in some early trouble.

Viv was in now and looking set to tee off. I’ve seen Viv hit 30+ off 10 balls at this very ground and a similar performance would have us comfortably on our way. Alas, it was Viv who was soon on his way, back to the hutch, caught on the pads by another skidder.

No worries. The ever dependable Dave Lollback was in the middle to bring some order, calm and proper shots back to the meeting. Mairaj steadied the other end, having a swing at a couple outside off but missing both. He didn’t get much on the next one either, but that was on a simpler trajectory and hit his middle peg so back he came under canvas. A bit of shame that as it is lovely to watch Mairaj pick up the quick ball early, and use its pace to send it around the ropes. However the pace of the pitch or bowlers wasn’t really an issue. The variable bounce was causing havoc though.

Perhaps Mahesh would have better fortune. He’s a sprightly batsman and we hoped his terrier like instincts would help him pick up the height of the ball quickly. He showed good intent, getting bat on ball early on and running quickly.

Dave was starting to find the middle of the bat but also found the fielders meaning the scoreboard ticked along a little too sedately. Looking to pump a bit of life into the innings Mahesh got too ambitious on one that kept low and a promising start came to little.

I joined Dave in middle with our innings in a mess. 32 for 5 in the 10th over. The first plan was to try and stay in the middle at all costs. We’d farm the strike and try to get Dave’s whirring blade facing most of the attack. Not to be. A daisy cutter uprooted his middle peg a few minutes later and I found myself leading the tail home. Upmost in my mind was to make sure we saw out our full 20 overs. If we could all chip in here and there, the tiring bowlers would surely help us out with wides. 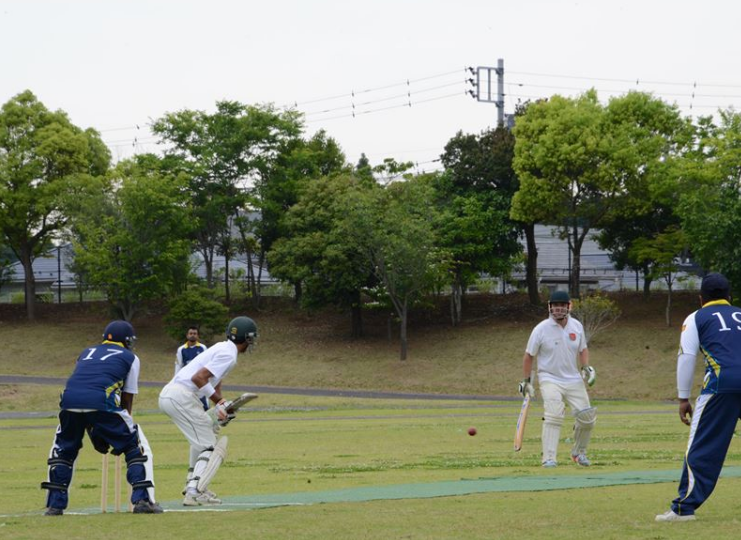 Muneeb and I made a good stand but the bowling stayed true. It was tricky to get anything out of the middle and what did get out ended up going to a man in the field. However we were still together in the 15th over. Muneeb, agile and lithe, poised panther like at one end. Me at the other, breathless and heaving, walrus like; a testament to the evils of over-indulgence.

Muneeb may have had the weight of the team’s hopes on his shoulders but I had the weight of 20+ years of mammon on mine and I can tell you which one felt worse. A sticky outfield meant we had to run everything that went into the book. I cursed at every mis-field as it generally meant that Muneeb thoughtlessly called me through for the 3rd run and that almost did for me.

Despite our best efforts and Muneeb’s skillful strokeplay, we just couldn’t get the scoreboard moving at any pace. We were picking up 6 or 7 an over but needed 10. Muneeb went for a cheeky Dilshan scoop in the 18th with the score at 64 and was unfortunately castled for his efforts. 2 overs to go and 34 to get. Yu did well to fend off a couple of brutes from the death bowlers but was caught trying to go over the top. Good intentions from the young man though. Kav came in to see out our innings and we picked up a few more but nowhere near enough. 75 all said and done. Kav and I finished unbeaten on 1 and 17 respectively.

In the end, there simply wasn’t enough in the Sharks batting tank. The big hitters wickets had been bought cheaply and the back-up couldn’t really cover the deficit. It was disappointing to lose again but there were probably more positives than negatives if truth be told. We saw some great bowling from Mahesh and KB in particular, the batting tail, traditionally a mere footnote in Shark batting innings, had another decent wag and the fielding was full of endeavor if not results. Many thanks to Murad Bhai and Terry for Umpiring the match. Solid performances from both.

It’ll need a bit of a miracle to see the Sharks into the final though. Now, where did I last see old Thumper?…here boy…