If you have ever been to the dentist, you will know that the appointment date comes around a lot quicker than say a special date like your birthday, Christmas, or just any Friday. This match against Sano seemed to have come around a lot quicker than other matches for some reason. Perhaps it is because this writer has had rather ordinary experiences against them. 0/83 off eight and a golden duck spring to mind. That being said, rolling them for 90 earlier this season was a definitely a highlight, but when a team bats all the way to number 11 you know that dismissing a side for under 100 will not come around very often. But on some days the cricketing gods look down on you and say “Now, this won”t hurt at all…”

Saturday was one of those days; we woke at 5:30am to the sound of rain bouncing six inches off the pavement. It didn’t look too good early on. Needless to say, when we arrived at the ground it was like arriving at the dentist and seeing a stack of ‘Where’s Wally’ books and then hearing that the dentist had a brand new can of laughing gas. The news was that Sano only had nine players for the day and only four familiar faces from that early season encounter. The thought going through the heads of all shark players was “Dhugal, please please please win the toss and bat!!” After a slight delay due to ground preparation he did just that and a collective jump for joy was had by all as if they had all just found Wally’s nemesis ‘Odlaw’ on the last page of the book. 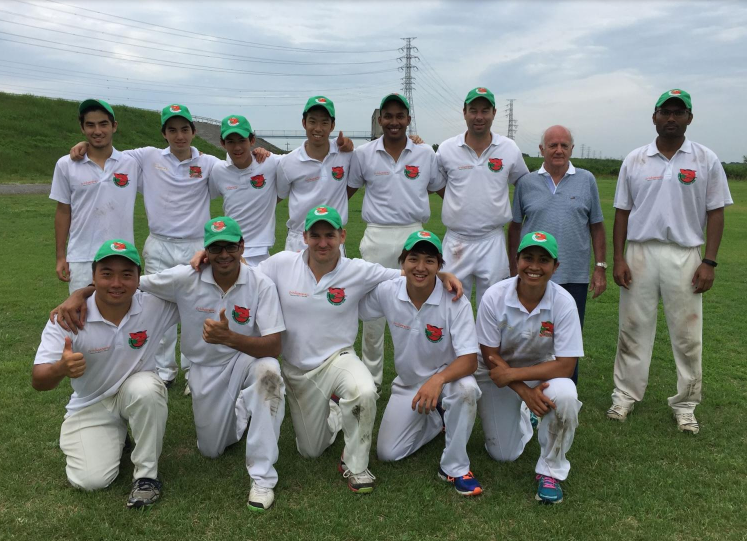 Coming in to the Sharks line-up was Vivek, Prashant, Gina, Higapon, Marcus and Nic and Dan Reynolds for their first outing for the Sharks 1st XI with Tommy 12th man and CT and KB on the books. (Another seven changes). Also in attendance was our major sponsor, Dr. Wheatgrass himself – Chris Reynolds.

Batting:
The initial plan was to go at it as business as usual for the Sharks’ batting, but when one of the very few recognized bowlers put the keeping pads on Dhugal was quick to change things up. Instead of Paul and Dhugal opening up like they have done so well in the previous three games, it was time to throw caution to the wind and put Vivek at the top as a suck it and see approach. It paid off immediately.

After the first three overs the two had clubbed 53 in a show of ruthless aggression. The Sharks’ ‘take no prisoners’ attitude came to an end almost as quickly as it started with Vivek holing out for a well-made 20 off 11 balls and putting an end to a string of ducks that Greg Chappell would be proud of (six in a row).

Dhugal again called for change from the centre and instead of Paul going in as planned, Prashant was told to pad up and come in at three. Understandably so as he was coming off a 99 and 103 not out. This partnership ended fairly quickly as the two were caught in a mid-pitch ‘wtf’ moment and Dhugal was run out. Paul arrived in reasonable form but looked uncomfortable from the start with the slower skiddier conditions. Prash and Paul had twice previously put on 100+ run partnerships and were looking to do it again but Prash was trapped in front for 5.

Takady came and went and the Sharks were in a bit of bother at 5-85 when Paul was trapped in front by his fierce rival and women’s national team captain Mai Yanagida. Untried Nic Reynolds and Samoan ladies captain Regina set about mending the damage the ‘Sano nine’ had inflicted and as it so happened we were treated to a preview of the ICC East Asia Pacific Tournament when Japan Captain Yanagida came up against Samoan Captain Lilii.

I would wager to say that this has not happened a lot or at all where two nation’s captains have played with or against each other in club cricket a week before they face off on the international scene, well not since Ian Chappell and Rohan Kanhai played for North Melbourne back in the 70’s. (You’re in good company ladies) 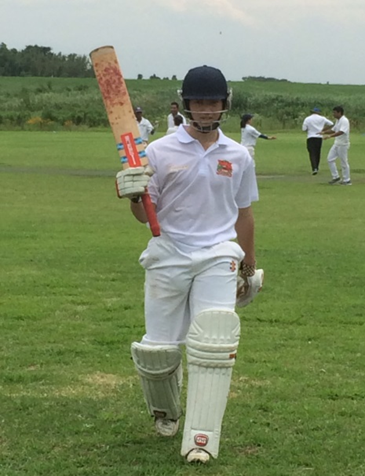 Regina played a very sensible innings pushing one’s and two’s and rotating the strike with new boy Reynolds who was indeed impressing with his stroke play and incredible timing. The two put on 29 before Regina set off for an ambitious run and was just short of her ground for six. Yosuke came in and like always, plays by his own rules without regard for the situation of the game. Yosuke and Nic were battling away to try and set Sano (who remarkably were in the match) a decent score to chase. Yosuke played his trademark way notching a valuable 16 off 16 before he was bowled by Shizuka Miyaji.

7-144 with the Sharks feeling a little more relaxed than they were at 5-85. They weren’t done yet as another young gun came out and it was a tale of the teenagers with 17 year old Nic passing his 50 and 15 year old Marcus sending the much older Munir and Prabath to all corners of the ground. The two batsmen played without fear and with only one goal in mind “RUNS!” and get as many as possible. For the senior Sharks in the side, it was a lesson in how to play fearlessly, Nic setting a great example for Marcus to follow suit. (sometimes it is just great to watch to young hungry players prove themselves)

The two took their partnership past 50 but fatigue caught up with Nic as he was caught on the boundary for a classy and mature 67 from 50 balls. Nic was replaced by Dan who was sadly trapped in front for a first ball duck. Varun is a pretty handy number 11 to have going in and the sharks were thinking 220. But with the overs rapidly running out Varun was caught in search of runs with the score on 211.

A very competitive total and a very defendable one with the bowling stocks the sharks were boasting.
Notable mentions with the bat: Nic Reynolds 67 from 50, Dhugal 32 from 20, Marcus 28 from 29, Vivek 20 from 11 and Yosuke 16 from 16. Would it be enough? With side that has Munir Ahmad in it, anything is possible.

Bowling:
What was to ensue could only be described as compelling cricket. Vivek earlier was told that he could expect to take a bag of wickets as one observer mentioned that he always bowls well when he gets runs. With that in mind Vivek came steaming in from the road end and with his third ball struck pay dirt when he knocked over Seiji Sugiura’s off peg for zilch, effectively putting Sano 3/0 with the two absent batsmen in mind.

This brought to the crease Sano’s best in Munir (who earlier had a run in with match officials over the arrival of Prabath and how long he was to wait before he could bowl) which set the detonator for fireworks. Either he was going to get runs or go quickly, either way; the tension was so thick you could cut it with a dentist’s drill. Dan came in from the river end, bowling some decent lines in the hope of feeding the hungry slip cordon. But it was Vivek who was in again catching the edge of Suri which gave Dhugal the easiest of catches in slip. (I’ve seen edamame give Dhugal more grief than that catch)

2/9 and still 200+ to get, but that soon became 3/9 when Vivek skittled Kumbhare’s castle. A hat trick was looking extremely likely as the Sharks circled the bat as if it were dripping blood. Vivek was denied his hat trick as Prabath kept out the crucial ball. The two looked to settle and frustrate the sharks with cross the line hoicks.

With the score at 38 the match had reached a decisive stage when Vivek found the edge of Prabath into the waiting hands of Dhugal again who snared a low down chance only for the umpire to say that the ball had not carried without consulting his square leg counterpart. In the olden days they used to trust the word of the fielder, but we are not in the olden days, and most people don’t trust fielders to sit the right way on a toilet seat. However, the gods of cricket righted this wrong by handing the sharks the prized wicket of Munir in sinister circumstances.

It seemed that Munir was unnerved with the weather forecast that Paul had given him so he quickly played back to a ball, let it hit his pads, giving himself out so he could rush home and get the bed sheets off the line before the rain. (Well that’s this writer’s recount of the incident, others may disagree)

It was the wicket that broke the back of Sano and it also handed Vivek his fourth. With Dan struggling with his run up due to a sticky glue pot of mud, grass clippings and Dhugal’s edamame pods, Vicky joined the attack. He quickly found the edge of Prabath for another slips catch to Dhugal, thus ending Vivek’s quest for all Sano wickets. Sano’s innings was in the hands of Mai and Shizuka. As capable as they are the Shark attack was just too potent with Vivek finally claiming his fifth wicket when Mai’s gutsy innings was ended when she was caught by Takady for 1 from 16 balls, an innings where she took all that Vivek and Vicky could throw at her. (One can’t help thinking that if the other Sano bats showed as much determination and courage as Mai did, it might have been a different outcome.)

Once Mai departed, it was a case of “under 50 Sharkies, let’s keep them under 50” as Gupta was run out in a fantastic piece of baseball/cricket fielding. Yosuke fielded a straight drive from the boundary, threw it to Takady at the bowlers end who relayed it to Marcus at the batsmen’s end who took the bails off and Gupta was caught short by a yard or two. Truly a Shark moment for the memoirs, handing Gupta a diamond duck with that fielding display.

7/44 effectively 9/44 brought the final Sano bat to the crease and with Takady on, bowling his off spinners again, flighted some early balls which Gurung sent to the square leg boundary taking the score past 50. The end came when in the same over Takady claimed the last wicket of a memorable match for all Sharks players, especially Regina, who hopefully has not yet played her last game for the Sharks, but we wish her well as she leads the Samoan national side in the East-Asia Pacific World Cup Qualifier. 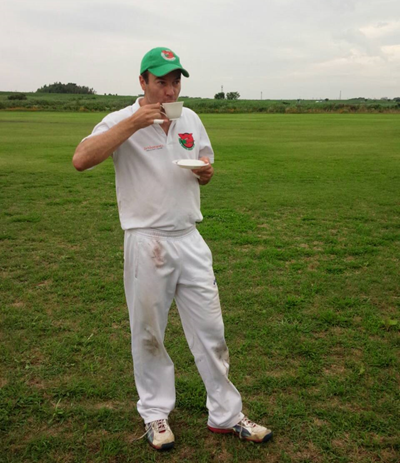 Thanks to CT and KB on the score books as well as KB for bringing some tea for the tired ones. Thanks also to Chris ‘Dr. Wheatgrass’ Reynolds for being the major sponsor of the Chiba Sharks C.C. and providing great support for the side on the day, as well as Alannah Morris for being a great supporter for the Sharks this season.

In the end it was an incredible day for the Chiba Sharks dispatching a rather disappointing Sano for a second time this season and for under 100 again to claim a bonus point. We know that they are dangerous and we have felt their wrath before so we know that they will bounce back hard, but today it wasn’t a case of ‘Where’s Wally’ in the dentist waiting room, it was a case of ‘Where’s Sano’ at Sano 3.