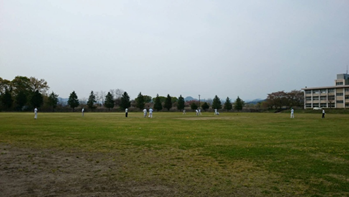 The Aussie skipper, Paul won the toss and elected to bat first.

Batting
Sumon and Navin were chosen to open. Both batsmen started by making smart singles but the Sano opening bowlers bowled straight, accurate lines in accordance with their fielding set up. Navin tried to take advantage of the open gaps but unfortunately he was dismissed by Roshan, caught and bowled, Sharks 1/20.

Paul abandoned an earlier plan and changed the batting order to get Vivek to throw the pads on potentially as a big gun to make some early headway and also take advantage of the power play; which is exactly what would happen. Sano’s fielding was terrible at this point. Vivek kept trying to send the ball over the boundary but there were many times when all launched deliveries went to hand but were all dropped by the bedazzled catchers. Vivek took the advantage of the chances he was given as he kept making runs as he was told by his skipper. The Shark’s second wicket was taken by Munir caught by Rizwan, which ended a dangerous Vivek inning, Sharks 2/46.

Next, Pav joined Sumon. Both of them played it smart by making intelligent singles. Sumon was soon after caught by Aravinda however to put the Sharks at 3/56. Takady came to the pitch to join Pav. Takady made some nice singles and whalloped one six but the Japanese master tried to go for more and was unfortunately stumped by Sano keeper, Aravinda. Sharks 4/76.

Pav seeming steady was joined by Asala at the crease. He tried to get away from the dangerous left arm spinner Abeysinghe and was unfortunately caught in the slips. This in turn would bring Paul to the crease and in the same over Paul was given LBW. Sharks 6/79 very quickly.

Vicky joined Pav and they built a good partnership. Unfortunately Pav was caught by Aravinda as the Sharks arrived at 7/114. Vicky then made a misjudgement and tried to come out of the crease and play but missed the ball completely and got his stumps ripped out of the ground by the keeper. Sharks 8/118.

He was quickly followed by Rui Matsumura, Shakriya and Tommy and the Sharks were all out for 124 witch Tommy stranded not out. Was it enough? Could the Sharks put up a fight or not? You never know. Cricket is a very interesting game. 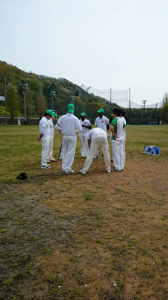 124 on the board meant that Sano would be very happy because they have a very deep batting line up and achieving this goal is normally an easy task for them. That’s what Sano thinks, however the Sharks have the firepower and the fielding skills to stop them. Either way the SICG was going to be in for a thriller game.

Looking for variation Paul threw the ball to Rui to open the innings followed by Viv. After only three overs Sano had gotten the score to 20. In the fourth over it was Viv who bowled out the opening batsman. Not only that, in the same over he took the other opener’s wicket which was caught by Takady.

The Sharks were on fire at this moment (2/21). We had a very good start. First change bowler was Vicky. The third wicket was outstanding team work between keeper Asala and gully Paul. Vicky sent the ball in to batsmen and it was edged, went high and through first slip Nav and Asala. Asala gave it a try jumping high and the ball touched the glove, slowing the speed of the ball. As it went behind the gully, Paul quickly ran back and took the catch. It was an exciting moment for Sharks but not so for Sano (3/41).

Next bowler Takady proved difficult to hit as always, cramping the batsmen for room with his mix of pace and sharp off spin. The Sano batsmen were struggling to score against Takady. He was in control now. Takady put pressure on the batsmen and sent Rashid back for an LBW (4/48). It was a questionable LBW, but hey, we should respect the umpire’s decision. 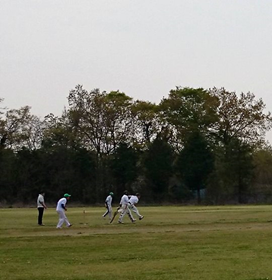 Paul took the ball and started to add more pressure alongside Takady. Pardan hit a sweep during Paul’s spell and it went up in the air and Tommy was there waiting for the catch where he rightly gobbled up the chance (6/79). The Sharks fielding was tidy and outstanding. The Sharks were in control of the game. Munir decided to come out of the crease and face Takady’s furious off spin and it spun so well that Asala had to jump on to leg side to catch the ball. Not wasting a minute Asala saw an opportunity to stump the batsmen, while he was jumping towards leg side, he switched the ball from left to right hand and threw it back to the stumps. That effort took one bail off the stumps and Munir was given out (7/86).

Sharks bowlers had done exactly what they were expected to do and were well in control of the game. In the 24th over, the third ball by Paul took Roshan’s wicket, right now 9/93 Sano, their last batsmen Shizuka Miyaji came to the pitch hoping to bring the Sano back up. Paul was not done with his over yet. Knowing how the batsmen play, Paul changed the fielding set up and brought them closer to the batsmen. In the same 24th over, with his fifth ball, Paul magicked up a yorker and Shizuka was frozen. It went through the Japanese national’s defense and took the bails off (10/94).

This was an exciting, thrilling match and another epic win for the Sharks. Sharks have defended a low score like this in the past, did it again today and if it comes to this point in the future Sharks will do it once more.

Big thanks for the 12th man Rubal who came and supported the Sharks and was also able to witness the epic win. Because of you the Sharks were able to rotate players during the game. We appreciate your effort to come and be the 12th man for us.