It has been a long time since my last letter to you; my travels have since led me to the Orient and indeed the Land of the Rising Sun. I came here in search of a foreign game that I had read about long ago between two ancient teams known as The Chiba Sharks, (perhaps in honour of the great creatures of the deep off the coast of this ancient land) and a side called MAX (perhaps in honour of a MAD post-apocalyptic Road Warrior from Baccus Marsh or an all-female singing quartet from Nagoya. I can’t be quite sure about that Mildred dear) doing battle in a Cherry Blossom surrounded field known as the SICG.

From the writings of their previous encounter the two sides have everything from class and elegance in Bedingfield and Kobayashi to grit and determination in Sancheti and Iyer. Apparently, in their previous match the Sharks won the encounter in what sounded like a closely fought game. The return meeting between these two sides would represent a mid-year evaluation as to where they are in the pecking order of Japan cricket.

MAX have picked up some momentum in recent matches with strong wins against Wyverns, Paddy’s, Tigers and probably not against Wombats (although they had won the match, apparently their stagecoach arrived late to the ground in Fuji and they had their win erased) the Sharks recovered well from a nasty loss to the Wombats with good wins against Paddy’s and Tigers looked to do the double over last year’s champions. 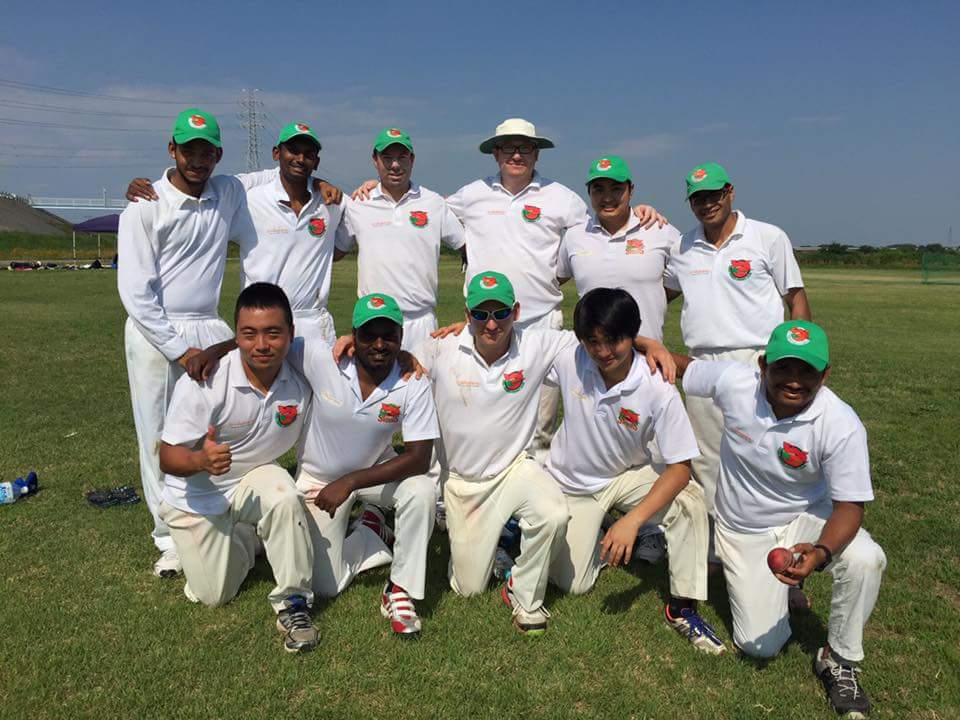 So Mildred, on recent form I believe that I had arrived at the right time of the year for a good game.
In their previous encounter it was described as ‘Sakura Cricket’ at SICG. Well, not one Sakura blossom was to be found. Instead it was a hot burning sun at a humid, sweaty, sticky Sano 3. (It was the type of day where you, Cousin Gus and little Ernie with the funny eyebrows used to go to the river and drink Dad’s boxes of wine).

Coming into the Sharks team were a few new faces and one old one. Takuma Yamashita has impressed recently with his off breaks, Mahesh as well with his off breaks and fine silverware, David Limin on the back of 36 and 3 fa in the seconds, Varun ‘Vicky Daddy’ Sancheti who has arrived back from India after becoming a father for the first time (Congratulations Vicky from everyone at the Chiba Sharks) Navin Jinasena and Asala returning from absence and a name that has not been on the first division team sheet for over a year David Lollback. (Come to think of it, that’s more than a few changes, more like wholesale).

While MAX were without Captain Taniyama (who decided that University cricket is more important than the highest level of club cricket in the country) and Shukla.

The two captains tossed the coin to officially decide who would do what. Kobayashi won the toss and without hesitation batted first which would put the sharks in the field for the heat of the day. Opening the batting for MAX were two of their best, Kobayashi and Iyer. On any other day, as a batsmen in the MAX tent, you would be comfortable to assume that a strong opening partnership would follow and after the first over from Takady which consisted of 3 over-stepping no balls (enough to put James Pattinson to shame) and a few wides with 12 on the board MAXs’ early nerves would have settled. But as so often he has done this year Captain Dhugal thought on his feet and realised that Takady was slipping and the run-ups would be better suited to a different kind of bowler. 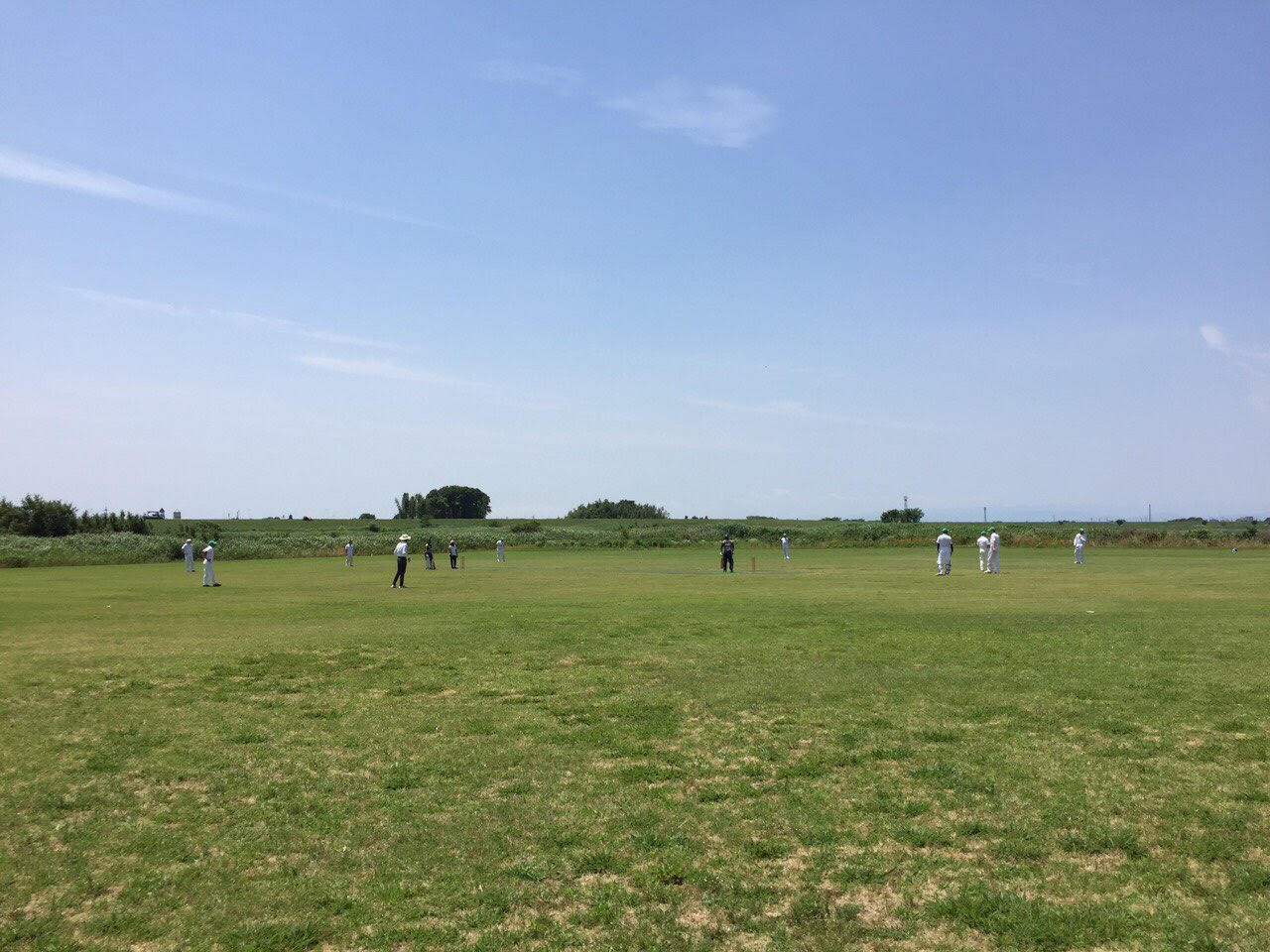 Instead of opening up with Vicky from the other end he decided that Vicky should replace Takady, but that meant another bowler was called for. Unexpectedly Paul took the new ball from the second over and almost immediately removed Kobayashi after an out of character swish saw him caught by Pav in the covers 1-12. This brought to the crease the Supun, with his sleeves rolled up he set about getting a sun-tan!! and making runs to help his side if he can help it. He and Iyer looked to build a good platform with Vicky and Paul toiling hard.

Iyer was playing some classy strokes around the ground while Supun edged and edged, mis-timed and scratched, leaving some observers asking “was it two of the league’s best bats or a performance of the odd couple? Regardless of which, with the score on 56 Supun edged one too many with Dhugal taking a seriously sharp catch at first slip for Dave Lollback’s first wicket for the year. It wasn’t that long before Dhugal’s entry to join Rui and Vicky’s fight for the ‘Greatest Catch in the History of the World’ when Takady caught the edge of Hanif’s bat which flew to Dhugal’s right and as the ball looked to have past the Shark captain he flung out his right mit, just before the ball bounced and it stuck. Mildred dear, even though there were no Sakura, I knew I had seen something special. 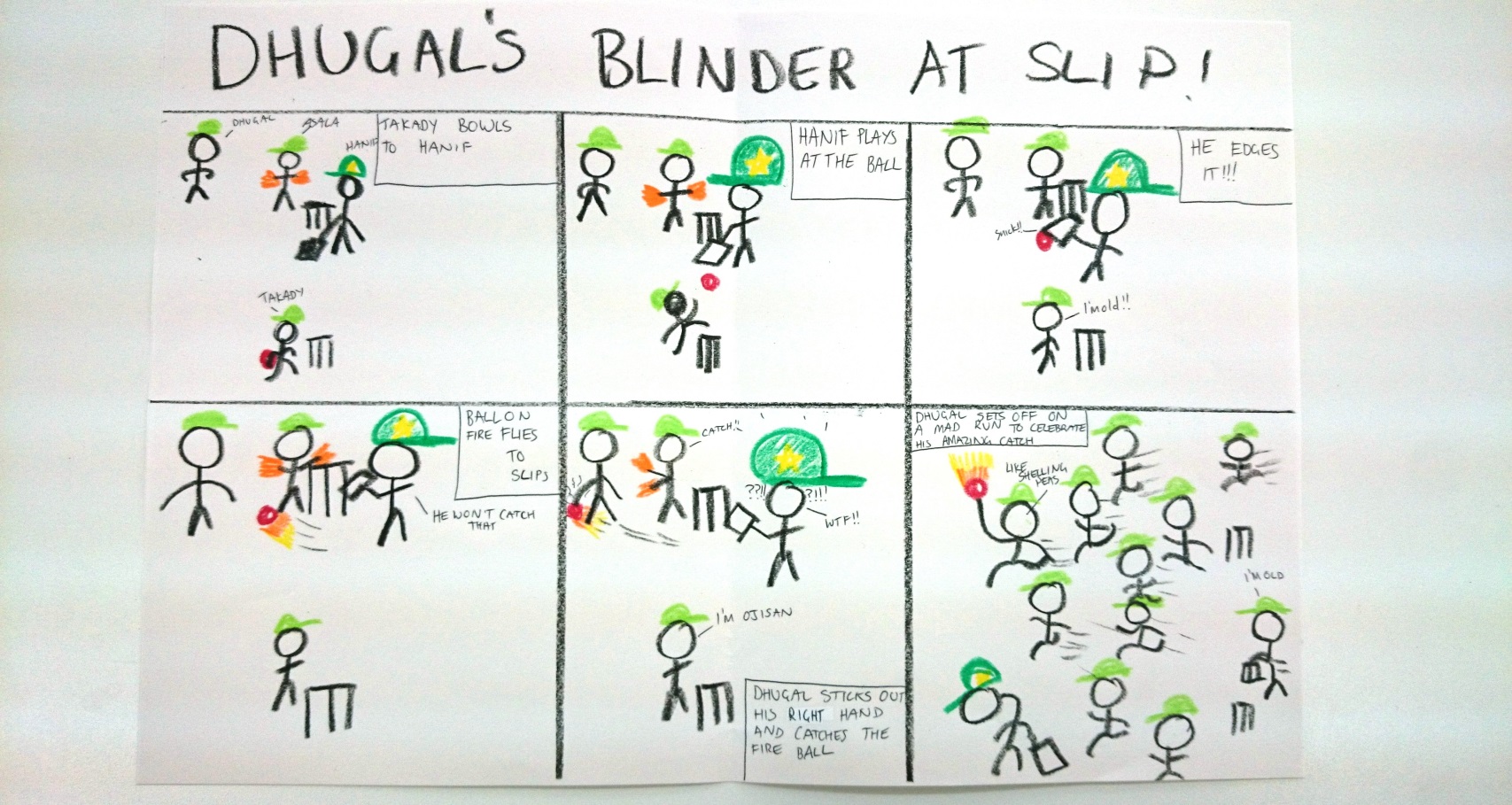 3-63 and three of the country’s best batsmen in the shed, the sharks could smell a MAX collapse. Singh joined Iyer who was playing a lone hand and doing it quite admirably. Lollback too, bowling probably the cleverest spell of bowling seen in the JCL this year, dismissed Singh and Hagihara in consecutive balls. Singh rather impatiently slashed at a ball which ended in the sizeable palms of Vicky while Hagihara edged to Gully where Paul took the easiest of catches.

5-74 with Iyer still at the crease not really hurting the Sharks, Takuma was brought on for his first bowl in the big time. Although he did admit to this writer his first two overs were full of ‘Disaster balls’ he eventually found his length and not long after the young lad found his first division one wicket. Lollback taking a somewhat confusing catch as it was a high ball and a potential collision on the cards with Takady’s younger brother David Limin. The players shouted for Dave to take the catch but with two Daves about to collide, which Dave were they imploring??

Lollback’s safe hands ensured that disaster was prevented and laughs were had at the sheepish lads who called for Dave to take the catch…. Then resistance from Iyer came to an end as he misjudged a floater from Takuma and lost his off bail. The Sharks were in and quick to congratulate young Takuma who may not have realised and may not for a while know how big his second wicket was. 7-90 and Lollback approaching his full allotment of overs grabbed a fourth with a somewhat nervy Nav securing an 8th for the Sharks. Dhugal could see that the fight had well and truly gone from MAX making me think that they’re less like the MAD Road Warrior from Baccus Marsh and more like…………

Mahesh was introduced to the attack and with an almost immediate impact took his first wicket with Pav holding his second catch for the game after a run of 6 overs where only 7 runs were scored. Then just as the score was approaching three figures, New dad Vicky came on and ended the misery.

So MAX an uncharacteristic 99 all out in 29.2 overs with only Vinay Iyer showing some resistance with a solid 44.
The Sharks again demonstrated that they are indeed a handful in the field with eight wickets out of 10 being catches regardless of how many changes they make. David Lollback the best of the bowlers with figures of 4-15 from eight straight, Takuma Yamashita 2-17 off four and one each to Takady, Sancheti, Kumar and Paul.

On recent form 99 would seem a fairly painless target for the Sharks to chase down, but if the Sharks were to have a customary top order collapse it would be anyone’s game. BUT, since the Wombats game Dhugal had seen fit to make some changes to that fragile top order. He elevated himself to the opening position and with him, a bowler whose highest score in division one was just 23 in Paul. But since the Wombats game, the Sharks have had two 40+ opening stands and averaged ballpark 180 for the first two wickets so the Sharks could feel confident in chasing down 99. 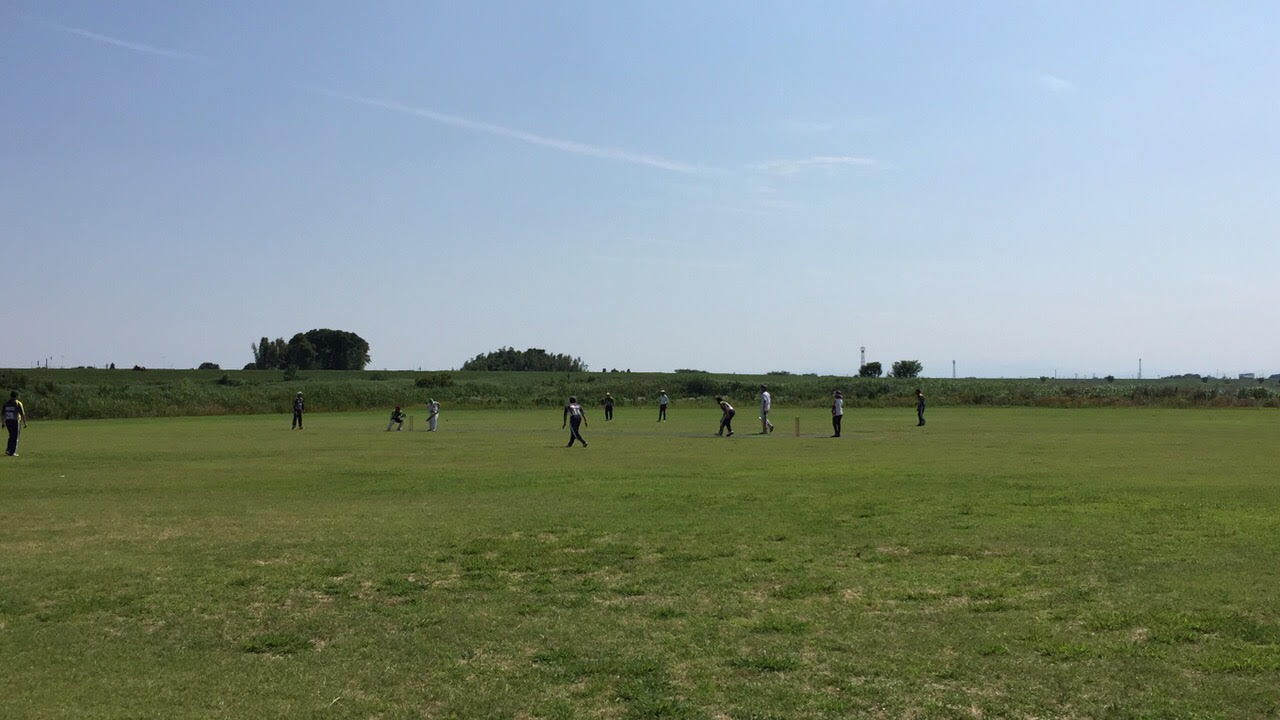 Dhugal and Paul started cautiously, leaving and defending Hagihara’s out-swingers then dispatching poor deliveries when needed. They had rolled the score to 17 after five overs when the game was pretty much taken away from MAX when Singh, who had been bowling full steam to another team on the practice wickets at Sano 4 for half an hour, ran out of steam and sent down five wides from the first ball followed by five no balls from the second ball and with the free hit conceding a cut-shot six over point from the bat of Paul. (If you’re keeping score Mildred, that’s 16 runs from one legal delivery) followed by a two, another wide, another two and to complete the over a four. Paul and the Sharks taking 25 from Singh’s third over. When you are chasing 99 and more than a quarter of the score comes from one over you probably have reason to be happy.
(4nb 4wds 6 2.wd.2 4 – Harmison would have been proud of that)

Paul almost committed batting suicide by hitting a drive to Kobayashi’s right hand and calling “Yes”. (You would give Amigo 7 out of 10 chances of hitting) (Note to self, don’t ever take on Kobayashi, not many men live to tell the tale)

With that, a change in the bowling was needed and when Iyer came on you would probably think that the scoring would slow a little bit, but Dhugal and Paul kept up the heat taking 17 from Iyer’s first three overs. With drinks in sight and the score at 74 Paul was adjudged to have been standing in front of his stumps when the ball hit his pad, (That’s what we call LBW Mildred dear) bringing to an end another great opening partnership with captain Dhugal.

Almost immediately, Dhugal was told that he nicked the ball into the keeper’s gloves from the bowling of Hanif. Some sensed game on. 26 still to win, but Pav with one blow sent Hanif for a maximum from his first ball. But even Pav couldn’t see it out losing his wicket to Iyer picking out Singh at long on. The chase was in the hands of Takady and Navin. Takady effectively ended the game with a big six off Vinay and then sealed the win with a four off Hanif and ending up 19 not out off 13 balls and sealing a bonus point. 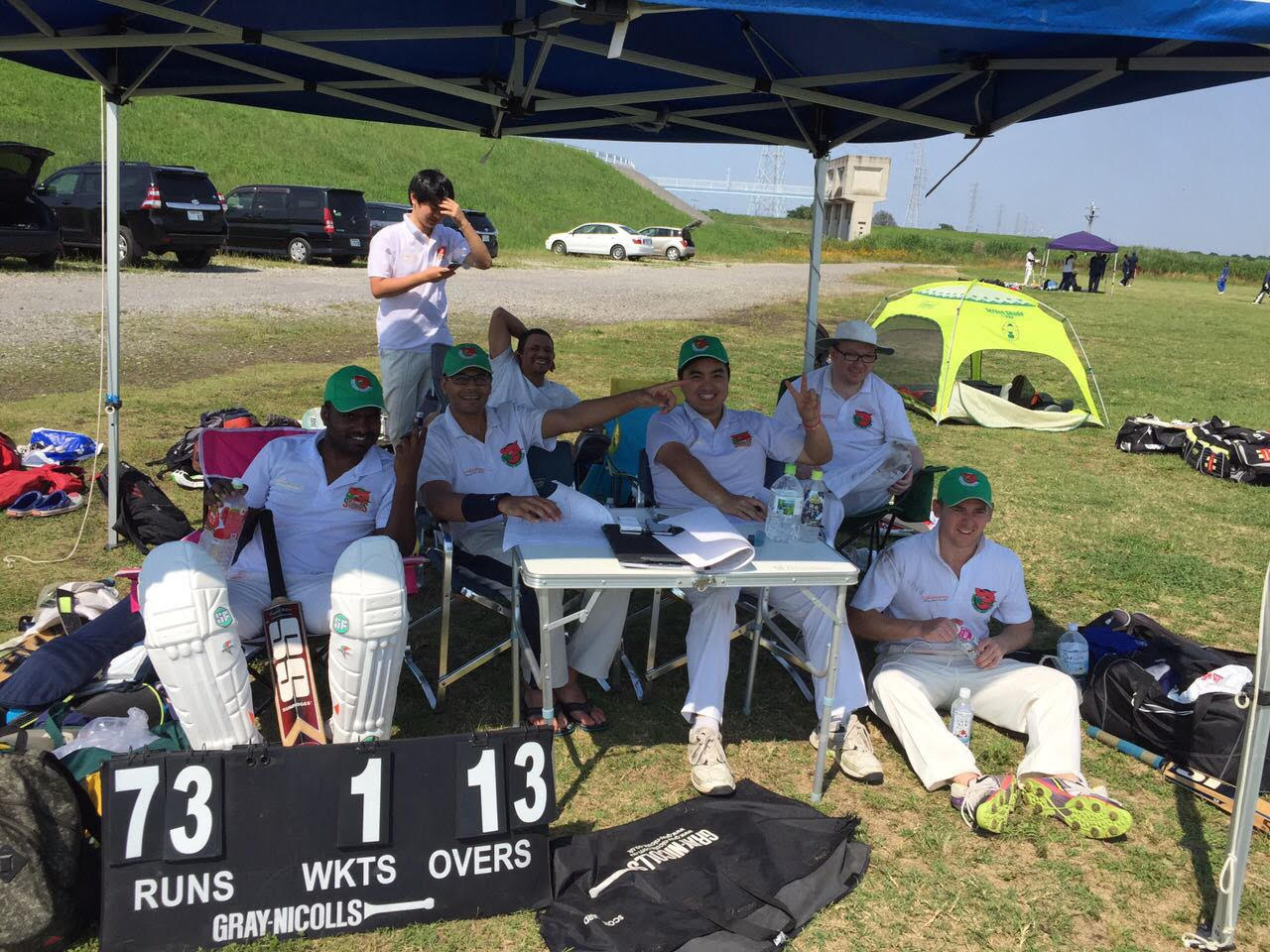 So the Sharks had easily negotiated the chase and did it fairly intelligently playing basic cricket shots. Some notable performances were Paul with 30 from 49, Dhugal with 29 from 40, Takady not out on 19 from 13, Vinay with the ball taking 2-26 from five and Hanif with 1-26 from four.

And so Mildred dear, this is all I have to report from the Orient for now, the game was not as close as I had expected, in fact the match finished at 14:30 which was early enough for me to hit the Saloon for a few refreshing light ales to celebrate with the victors and commiserate with the losers. The next match will pit the Sharks against Sano, another tough test for the creatures of the deep.

I am not sure when my next letter to you will be, but after this my travels will take me to a coastal fortress known as ‘Thurgate Towers’ apparently it is the sight of a annual great feast where the hosts serve up tons of food and the chief host will sing bare-chested ancient tunes from his homeland.