The Sun shone down impressively at Sano 1, encouraging local rowing teams to make the journey around the boundary to the cool flowing waters at the River End, and drawing the odd eagle to circle above, preying upon any unsuspecting fish swimming too close to the surface. With not a cloud in the sky, it truly was a beautiful day for Cricket; all that was missing were the players.

The Golden week rush had caused some delay for umpires and cricketers alike, forcing the starting time back to 11:15. To some it provided much needed warm-up practice, but more importantly for the young Shark debutants Regina Lilli and Nick Richardson, it brought about a sparkling welcome from skipper Chris Thurgate, and their very own Chiba Sharks cap. A proud moment for both.

The pitch looked in fine condition, and one glance told both captains all they needed to know; a short boundary or two, a racey-looking outfield and a fine batting wicket. With the self-proclaimed magician Anton Potter as the Sharks 12th man willing the coin toss in our favour, and the skipper’s past history of securing positive outcomes from the ceremonial flip, the outcome was of course a mere formality . . . The Sharks lost the toss and were elected to field.

Fielding
A gentle breeze across the wicket accompanied the beaming Sun; excellent conditions for swing and variation with the new ball. It was to be Richardson on his debut game that would open from the River-end, all 6’7” of him steaming in through the glare of the sun toward the opening partnership of K.Ito and B.Umair. Variation prevailed, but not from the ball, as a lovely cover-drive followed by a straight-drive brought Adore to 0-8 from the first over. Sankar took the honours of opening from the bank-end, firing in a familiar maiden-over and asking all sorts of questions of the batsmen.

As early as the third over the first real chance would come, the batsman misjudging the line of an in-swinger and edging it to first slip. It flashed off the bat and although Kris Bayne could get his hands to it, the ball wouldn’t stick. Sankar returned for his second over of the game with the sam 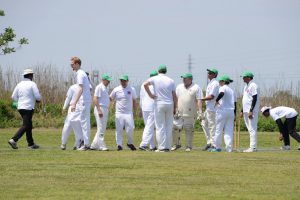 e conversation to the batsmen; dot balls ensued, 0-16 from 4 overs.

Adding line to his formidable length in the 5th over, Richardson struck; the ball swinging beautifully in the breeze and cutting back to take the top of off-stump. With bails removed there was a good buzz from the Sharks team and fielding first didn’t seem such a bad thing to be doing. The openers bowled out the first 8 overs, with Adore 1-33 in reply.

Fins-up from the wicket, Chris Molloy and Kris Bayne came in to test the batsmen with good old fashioned turney-wristy stuff (written by a pace bowler who had no idea about spin). Molloy sending some sumptuous deliveries down that, on another day, could easily have found an edge or if they had purchased a little more from the wicket, would have licked the stumps. KB  started equally strongly, his figures blemished only by two big hits over the boundary by the hard hitting B.Umair.

The 15th over was significant for two reasons. The first of two much needed drinks breaks, and the fall of B.Umair. Molloy, sweat beading from his brow, floated a teasing delivery that was played-and-missed and found middle stump. 2-66 at the break, it gave CT a good platform to inspire the troops and keep the pressure on.
A change at the break saw the fledgling Kavin replace KB and take an immediate wicket – his first for the Sharks as the brave CT stood right up to the Stumps and reacted to a late snick to confidently claim 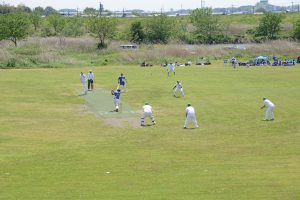 Replacing the wicket-taker Molloy was the debutant Regina and it wouldn’t be long before she was also amongst the action, but not before another man fell. Kav continued at the other end to take his second wicket in two overs, an LBW decision that seemed to receive shouts not only from Sharks players, but also a knee-jerk reaction from the Adore scorers who clearly agreed with the plumb decision. With T.Shouji heading back to the pavilion, Adore were 4-78.

ReXena the Warrior Princess buoyed by Kav’s masterclass, then took one of the most significant wickets of the day, drawing S.Hashiba on a comfortable 21 runs, into losing his off stump. Bails in the air, the Adore team were crumbling and it was in Regina’s third over that another wicket would fall, bowling straight and fast to the middle stump got it’s just rewards with the batsman looking bemused. 6-91.

Molloy replaced Kavin, with Regina continuing at the other end to claim her third, and the 7th wicket of the innings – another clean bowled victim with the score at 7-103 . . . it looked like very clear waters for the Sharks. 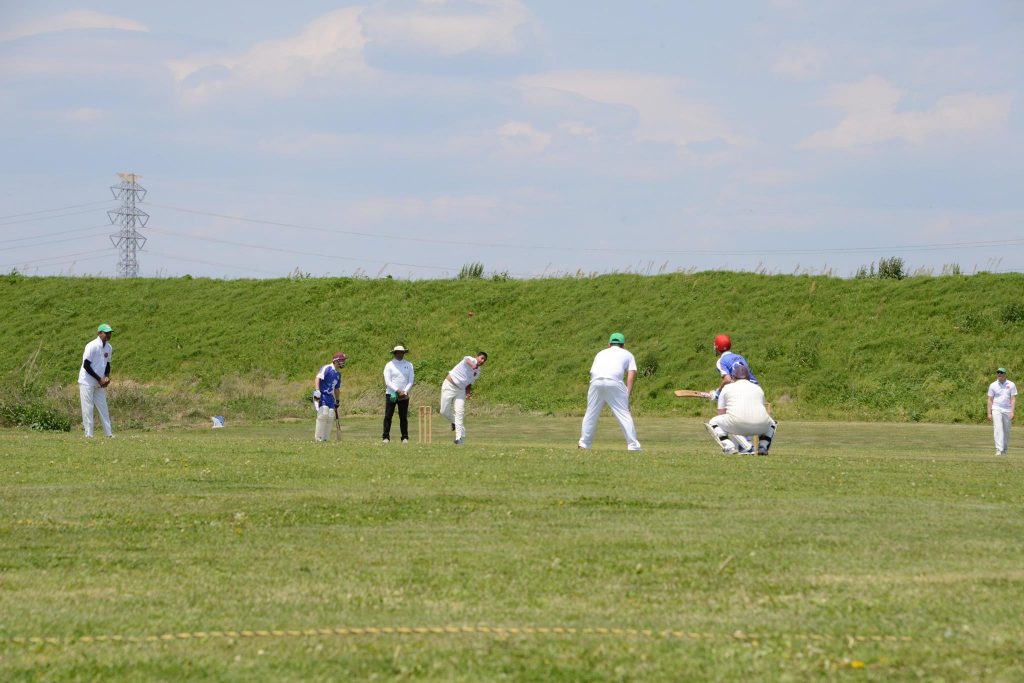 From a high looping effort that arced over Molloy’s head, Richardson put the ball down and added to the Shark’s unimpressive catching performance in the field. It was the fourth claimable catch that had gone astray, and led to a question to CT about setting up a forfeit of a beer to the bowler for any missed catch made, but he replied about his concerns of not having any sober bowlers available for future matches. Thankfully the pressure could be put straight back on following the missed catch, as Rubal, who replaced Xena claimed his first victim with thanks to a fine catch from Molloy standing at cover point. Adore 8-135.

It was then that the real Adore batsmen came out and took charge of proceedings. Disappointingly for the Sharks from a position of clear domination, a 73 run 10th wicket stand made their afternoon much more difficult. Sankar and Richardson bowled out their full 8 overs, with Sankar clean bowling the all important wicket of S.Takase (61), and Kav returning to take his third and the final wicket of the day with a nice catch by CT behind the stumps. A dubiously rejected stumping decision aside, the Sharks would be the first to say that they lacked ferocity in the field, and that the 34 extras conceded were an un-necessary contribution to the Adore score.
Adore 1st Innings Total – 214 all out from 37 overs 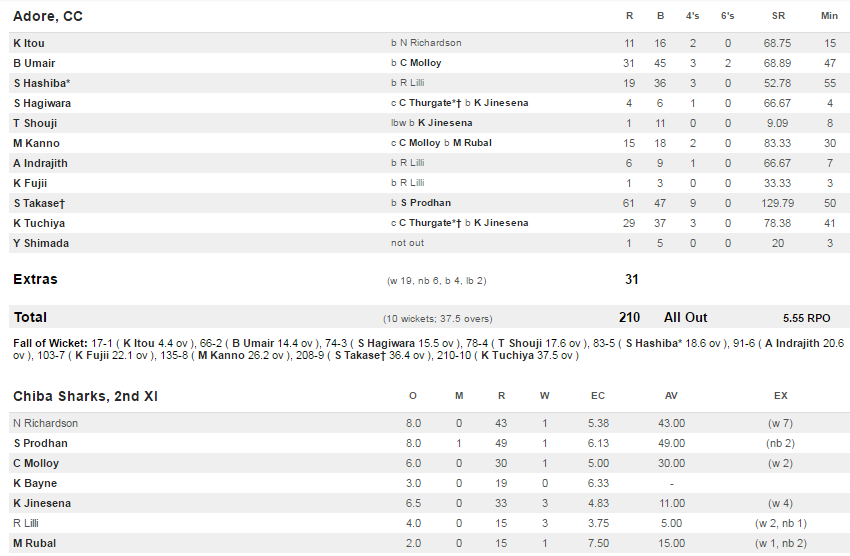 With a little above 5 per over needed, and the pitch still favouring the batting team, it looked a very presentable target. Striding out like a couple of Great Whites, Sankar and KB took to the crease, the former giving us a scare with a dropped catch on the very first ball of the innings, but then easing into the first over with a single a-piece. It was to be in the second over however that KB would return to the pavilion looking more akin to Shark-fin soup, having slashed out to a slower ball, top-edging it in a perfect 90 degree arc. Even if he were trying to do it again, i don’t think it could be managed with quite so much prowess. The score at 1-2, we needed someone to stay there.

Enter David Limin (Limo) – and what a stretch he gave us. First ball dispatched for 4 off a delightfully timed pull-shot, Limo was happy to park himself at the non-strikers end (shout out to Molloy for the cringeworthy pun) for a while to see what Sankar could rummage up. Some fine footwork and distinguished boundaries took the Sharks forward, but disappointingly Sankar’s innings was cut short after a forward drive didn’t quite find the middle of the bat, and became a simple catch for the man in the covers. Sharks 2-28.

Cometh the hour, cometh the Warrior Princess. ReXena, fresh from a vegetarian snack, showed that 3 wickets with the ball is less impressive without runs from the bat. A surging display had Limo driving down the wicket, Regina displaying classy late cuts and soft-hands to find the gaps in the field. At the 15-over drinks period, the Sharks were swimming at 2-66 – tied to Adore after the same period of overs. Relentless is how the next period played out. Limo and Xeno continued to display the kind of cricket that makes Sharks short odds at the bookies, Limo with a notable pull-come-drive shot that flew back past the bowler and found itself lost amongst the reeds. 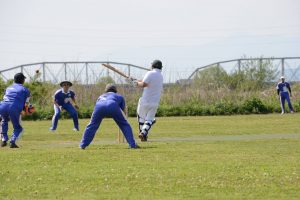 The 20th over came but many would rather it hadn’t – Limo in particular. Taking on the dangerous S.Hashiba, Dave dollied the ball into the air for Kanno to get her hands to and gleefully hold onto. 39 off 48 balls, it was a fine innings from the young man. Sharks 3-114.

‘Shaking that Mairaj Stick’ is perhaps not a well known hit from the 80’s, but a few of us were singing it from the boundary as Mairaj took to the crease. His first shot a big swing and miss, it held promise for a fast and furious innings. Indeed fast it was as on his 7th ball, he played and missed to Hashiba who took his second wicket of the innings. Sharks 4-126.

What followed was one of the finest partnerships of the day, forged between Terry and the Adore bowler K.Fujii. In football they say ‘he’s done him with his eyes’, in cricket I don’t know if there’s really a comparable saying, but an over of 9 wides, 5 of which were consecutive, had a number of people questioning the psychology Terry had deployed on the bowler. With the umpire visibly tired from raising both arms quite so often, and the scorers running out of ink, the second drinks break came at a good time. Sharks 4-146 from 30 overs.

15 overs left to play and 70 needed for the win. The Sharks were in control of the game, led by the superb innings of Regina, but it didn’t take long after the break for another wicket to fall – Terry stumped off the bowling of Hashiba shortly after a nice boundary.

Skipper Chris Thurgate took to the crease in typical fashion. True cricketing genes in his blood, a huge boundary for six had the team on the boundary crying out for more. This was followed by a classy four, before Regina made her 50 and almost immediately bowed out, caught off the bowling of B.Umair. 51 runs better off with thanks to her contributions, the Sharks have found a true gem of a player. 6-167.

Kavin joined CT but it was a short partnership which saw CT run-out by Hagiwara. Disappointed but not defeated were the Sharks and in came Rubal to link up with Kavin. It proved to be short-lived with Kavin looking back to see his stumps uprooted off the bowling of Shimada, seemingly drawing the match to a close. Sharks 8-181.
Molloy joined Rubal, and set his mind to taking strike. An opening batsman at times, Molloy could provide deep support for just this moment and took to the task well, scoring quick singles and 2’s to help his partner.

Eventually the ball got the better of Rubal in the 37th over, Shimada claiming the wicket. Sharks 9-186 from 37 overs. Bereft of any equipment that fitted, the newly declared Gingernut came to the field to wild applause. 30 the target, 3 overs the remaining allowance – it seemed a challenging yet attainable objective. Perhaps with a longer, wider bat, the gingernut would have connected more than he did with the ball, but as it played out, Molloy and Nick R neither lost their wickets nor reached the target needed.
Final 1st Innings score Sharks 9-192, 40 overs bowled.

In summary it was a match that epitomised the statement ‘catches win matches’. 5 dropped opportunities (some half-chances) really made a difference, and at the death when Adore looked limp at 8-135, those additional 70 runs proved just too much. The youngsters can hold their tail fins high – impressive displays from Kavin, ReXena and Limo in particular – and we can expect the Sharks to be there-or-there-about’s come the end of the season based on the great bowling performances and a couple of classy innings on show today.