Coming into this game Sharks Twos lay firmly mid-table at 2-2 while Sano were basically under it. We aimed to keep the latter in that state of nullity. Both teams had an interesting mix with some wily veterans heading teams made up of youngsters – a great advertisement for cricket in this country.

We arrived to a drizzly Tatebayashi! Like Pixar meets ‘Game of Thrones’ twin teru-teru-bozu swung hanging from every street lamp, mocking us. The usually beckoning tanuki seemed to look away in befuddled embarrassment. In some form of reverse voodoo, one of us went for a watermelon Gari-Gari-kun the colour of failed anti-freeze. But true to form, the ‘hottest place on Honshu’ soon enough had us and our shirts going through the wringer.

Selection for this game had been as sticky as the weather with no less that fifteen eager Sharks with fins up to play. The selectors decided to ‘rest’ (read needing to bound and gag in hessian bags) some veterans. Debutant captain, the swashbuckling Sankar Prodhan, was to lead a young crew over the gunwales to sink Sano C.C. 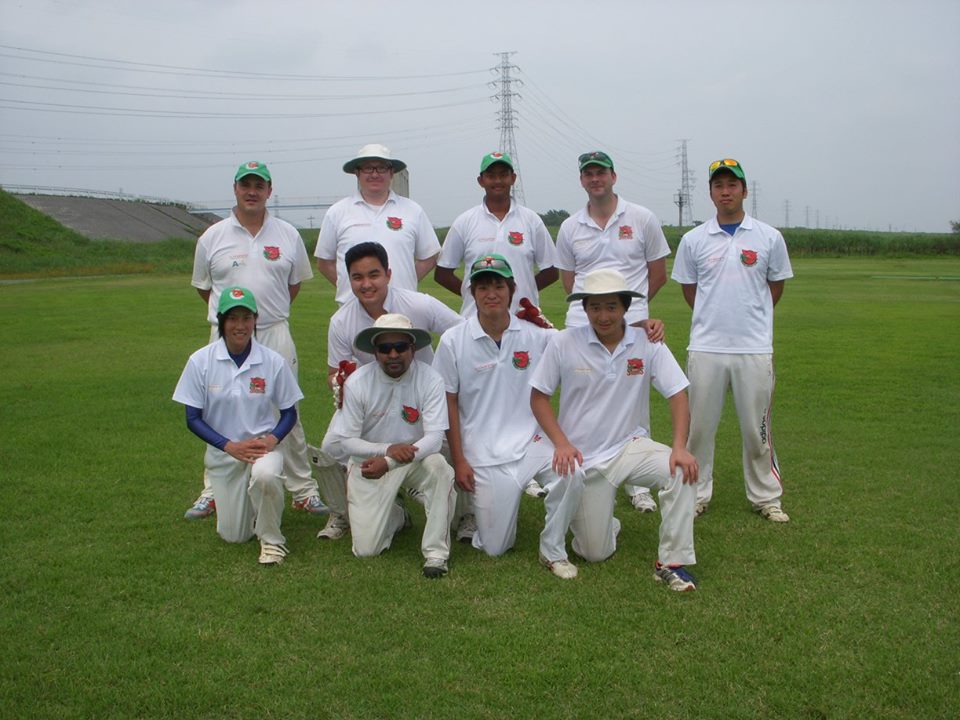 It was a new-look side but some things never change. As tradition has it, Capt. Sankar lost the toss, but Sano decided to take advantage of the still, steamy, soupy conditions and had a bowl. 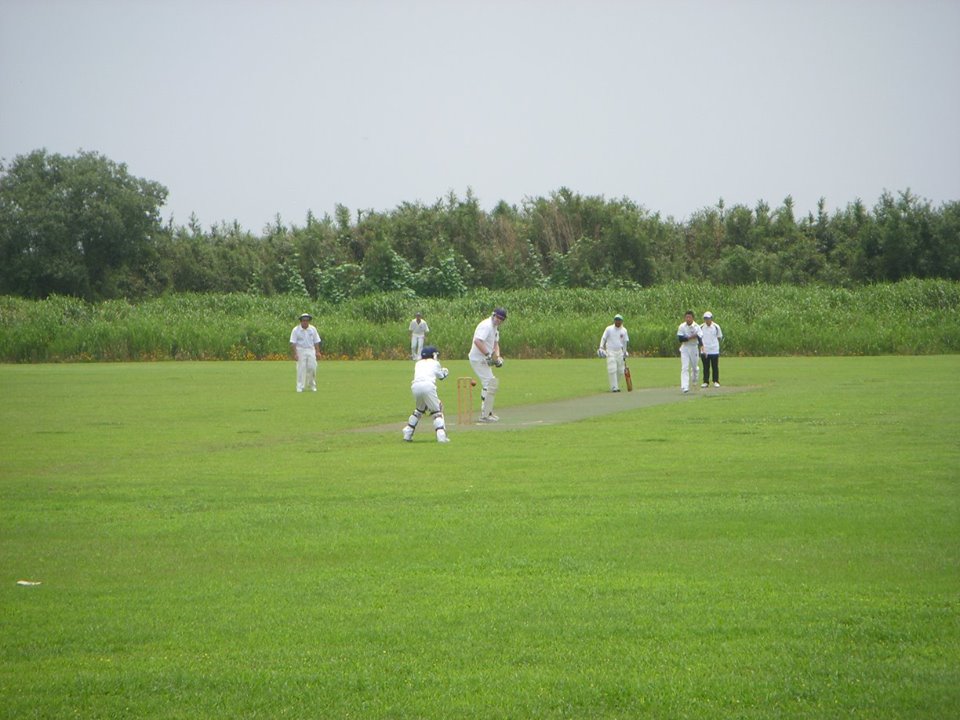 ‘Form’ batsman, Anton, suited up and he and Sankar took guard. Anton’s dream run of three PBs came to an end, however, courtesy of a seaming/seeming Shinozaki monster to have us at 1-17. The kids of Sano must have quailed and passed their waters as Dave Lollback, all sun block and menace, sashayed to the crease. Sankar had spanked a 4 down the ground second ball but he and Dave then settled into building a partnership. Sankar lived dangerously and benefited from nervous fingers but the pair rotated the strike and kept the scoreboard attendants busy. Both could rip an attack apart but with the longish grass coming into play they had to rely on running the runs.

Boundaries, though would and did have to be got aerially. They took to the middle overs of the very steady Nakayama. Dave unpeeled three consecutive 4s down the ground and Sankar clobbered two 6s, both fielder assisted, but given their wont, it was a measured 89-run partnership. Dave had to go after being dubiously adjudged LBW off Kubota (double whammy!). 2-106@20 over drinks.

The GGK-injected Limo joined Sankar. The former went through the gears fairly quick with some vicious pulls to the rope and enlivened running. This seemed to encourage Capt Sankar to put the foot down as he quickly motored through the 50s. His great ‘captain’s knock’ of 62 ended when he picked out the most reliable Sano outfielder, Seiji (we did so three times!). 3-135. 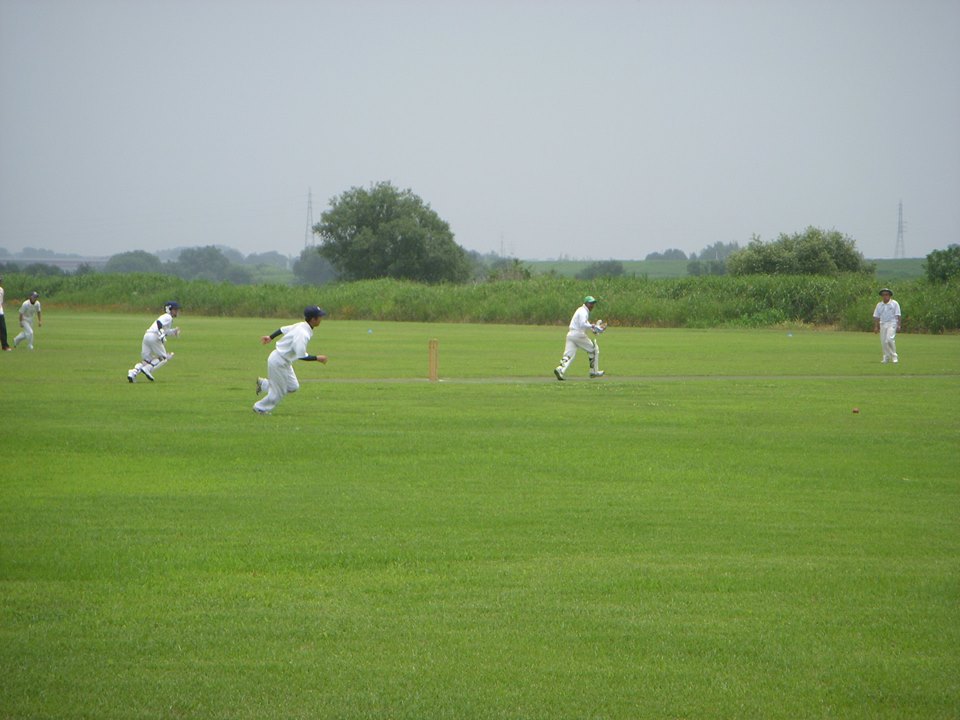 Ryo Yamashita, busy with his university team and national training, took centre for this first Shark outing of the year. He and Limo and the rest of the middle order then took on the girl-might of Sano (Nakayama-Miyaji-Yanagida) and probably came off second best. Ryo planted one towering 6 but Limo was kept in his lane by some tight lines. Ryo (13) gave Seiji catch#2 on 158 and Limo played over a cut to be bowled by Miyaji for another well-compiled score of 29. Kurumi had played very solidly but followed four balls later, nicking one to the ‘keeper. Suddenly we were 6-172@34 overs and we would need a wiggle on.

Chris Molloy joined Takuma and there were still plenty of balls to do some damage, but Miyaji and Yanagida were giving nothing much away. Runs were coming but in ones or occasional twos. Chris, in an effort to break the shackles again pinpointed Seiji (8-181) and it was left to Takuma and Kavin to get us to a desirable 200.
Takuma was playing his most mature Shark innings to date and the former My-Y teammates ticked things over with some heart-in-the-mouth running. They just fell short of the target but Takuma creamed one final 4 through long on to takes us up to 7-195 off our 40 overs. 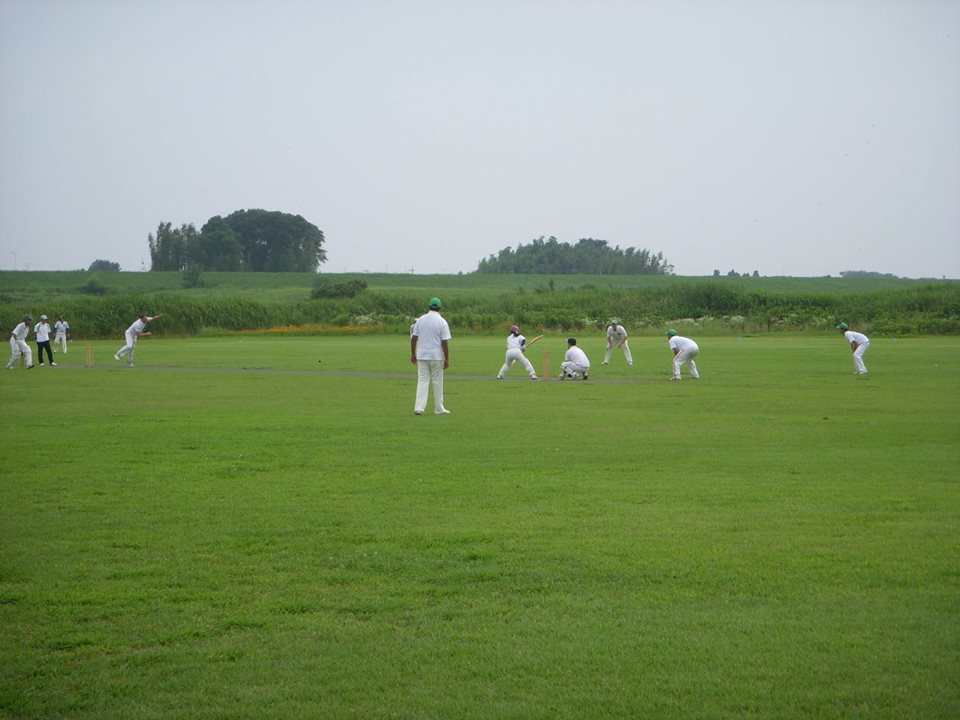 Temperatures had hit early 30s in our innings and the humidity was over 90%. But the interchange of sun and cloud created an interesting, ethereal light. Mercifully we got to take the field with a bit of a breeze and a cooler clime.

Dave opened the assault with Kurumi against the experienced Seiji and very young Noguchi. The dots stretched into the distance but despite their nagging medium pace line and best efforts Sano inched to 10 (5 of them wides) without loss in 7 overs before Sankar rang the first of many changes, unchaining our extensive spin battery with Kavin and Chris Molloy. Limo got to park behind the stumps today in his Shark ‘keeping debut, shunning a helmet to go ‘top down’.

Kav took a while to get his line, but when he did he got rewarded. Noguchi’s brave knock ended when Kav knock back his stumps in the 10th over and he soon followed up when Ryo took the first of three catches. Getting good bounce, Kav drew a high edge which sped equally high to Ryo who held it at his amble shoulder at 1st slip. 2-31. Chris was his usual solid self, but Seiji stated to find gaps and was well supported by Fukumoto. The scoreboard moved along slowly. 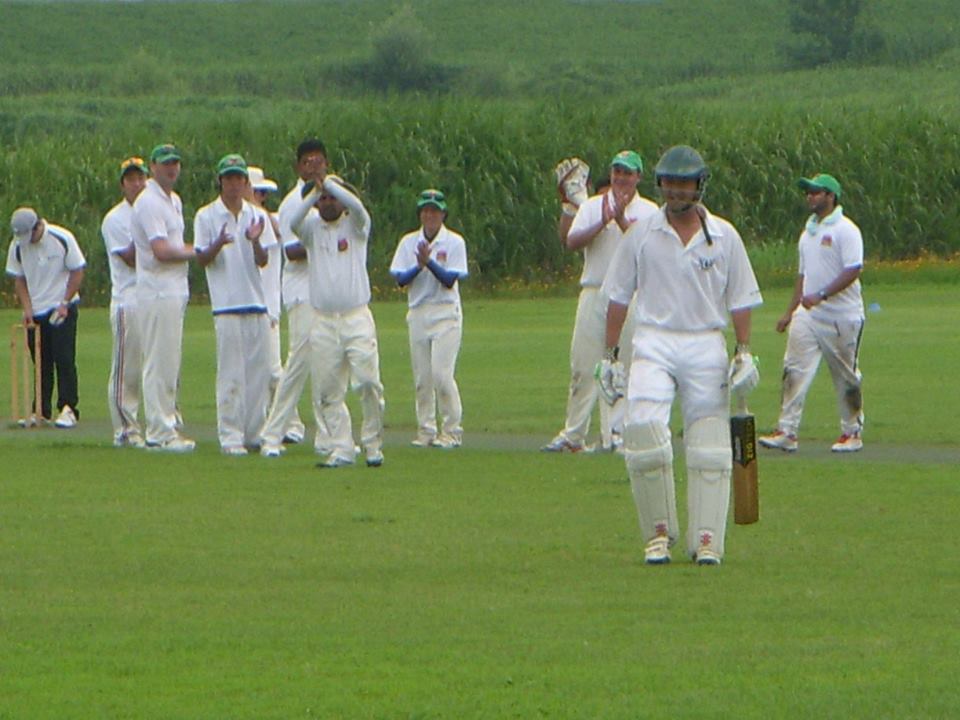 A double change saw Krishna and Takuma into the fray. Takuma also took an (expensive) over and a bit to get his bearings but Krishna, as he has done all season, dropped into the groove immediately, sending down a maiden. Limo behind the stumps was earning his keep. The young’uns were at it again in Krishna’s second when the dogged Seiji tickled one and Kav at slip made no mistake! Big wicket when needed, 3-65. Another maiden to Krishna, some tight work by Takuma and sharpness with the gloves by Limo really put the brakes on.

Sankar was working his way through team in democratic fashion (12th KB, prowling the boundary snapping classics and whistling strangely, started to get itchy fingers!). Next bowlers in tandem were Ryo and Yu and things really got bizarre. Ryo started off on a good line against a set Fukumoto and Suto. He soon drew Suto forward where it lobbed into empty space at short mid-wicket. That space soon filled with Anton who took a great tumbling catch low down, to his great delight. 4-75. Yu was spectacular in other ways and had people checking their calendars with a 9-wide over and 4 more in his next, but he did start to find his line. Ryo added another scalp when Limo accepted a nick behind. 5-87. Shizuka Miyaji entered the scene. Yu’s two overs had taken 25 balls, but his last took six, all of them unblemished as his sent down a maiden!! Nice comeback!

As second drinks approach Anton got his turn with the ball. Miyaji had looked solid and busy and with her there we could not feel so comfortable. So, as Anton has done before, his arcing, aching ‘inverted parabola of filth’ (IPF) removed her. One floated up, straight down the Steak & Kidney line. It’s gristly meatiness almost hypnotized Miyaji who reached forward and, the stumps – Limo did the rest! 6-98. Very important wicket right on the 30th over refreshments.

Takuma took up the gloves as Limo proved to be a convertible – batting, ‘keeping and now bowling. At six down with around the same amount of runs again to get we were well-placed, which is always very, very dangerous for the Shark 2nds… But it soon became 7-103 as Ryo got Catch#2 and new claimant for the crown of ‘Greatest Catch in the History of the World’. A thickish edge and the ball flew low and hard past Takuma up at the stumps. Obscured, Ryo, at 1st slip was more than equal to the task, getting all of it, pouncing to his left behind the ‘keeper. Quality work, and the end was in sight with plenty of bowling firepower to come back.

Or so we thought… Man-about-Sano-and-Serial-Lollback-Slayer, Makoto Kubota, muttered and yodeled his way to the centre to all manner of advice from his team. One dot then Kubota mowed into Anton and Limo, uncuffed and uninhibited and sans-catcher. We bled runs while he merely bled (mayhem-induced nosebleed, apparently). Balls went in all directions at great speed and finesse. Even his teammates were confused. Our next inroad, and none-too-soon, was again by Limo, who strategically placed Anton a bit closer to where a rank full toss was smacked right at him. Three bites and he had it! 8-133.

For the final 5 overs, Sankar brought back Kurumi and gave himself a roll – making it all 11 bowlers for the day! This immediately clipped Kubota’s wings, and his cameo ended when Ryo, now on the rope at long off almost casually took a 6-bound catch centimetres inside to give Kurumi a well-deserved wicket-maiden. Try as they could Kurumi and Sankar could not make it a clean sweep as the final two bats played out the overs. 9-146.

It was a classical sort of game of pleasant ‘village’ cricket. Sunny day. Both sides fairly even. Vets and youngsters. Both in solid white. Both very familiar with each other. Applause from both sides for good efforts. Solid partnerships. Good spin bowling. Great catching. All-round even display that went its full complement of overs.

We probably made it a bit harder for ourselves than we should have, but all-in-all it was a very satisfying win. Toward the end Aditya, Shark, jet-setting businessman and sponsor arrived to say ‘Hi’ and we will soon be sporting AkaiHost badges on our uniforms.

Our win leaves us at 3-2, with Paddy’s to play on August 20, and as the teams below us can not improve their points enough to go above us, it looks as though we are semi-finals bound!