So what was that weird noise that shattered the rustic calm of Sammu sports ground at around 4.30 pm last Sunday? The outraged howl of Thurgate Junior as he railed against the spitefulness of the Cricketing Gods in getting him run out for zilch two weeks in a row? No, that was earlier. The plaintive chirrup of KB’s abandoned iPhone as it searched in vain for its lost master? No, that came later. In fact the noise in question was the sound of the Shark’s bubble getting comprehensively popped. Going into this one it was six wins out six at all levels including the juniors, but on this day seven out of seven proved to be too much of an ask against a Tsukuba side who contained us with the ball and outdid us fairly comfortably with the bat. 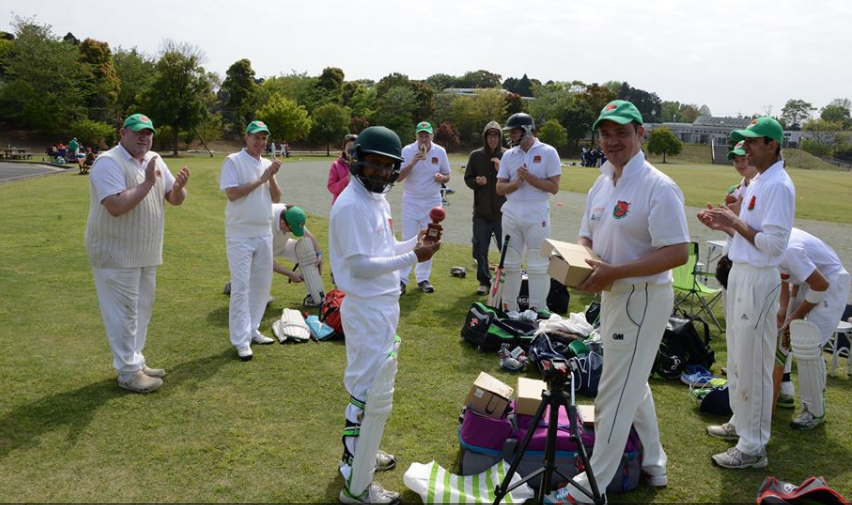 Just like last week, Sammu defied the weather forecasters’ gloomy predictions, and it turned out to be the kind of fresh Spring afternoon we’ll look back on fondly a couple of months from now when the barometer’s arrow moves from “Hot and Humid” to “You’re Having A Laugh”. Just like last week the Sharks batted first, and just like last week we contrived an early run out, only this time not once but twice in quick succession as both Molloy and Marcus failed to decipher Sankar’s signals and were left hopelessly stranded as the non-striker declined the single. 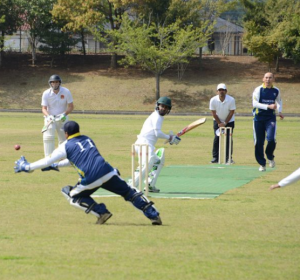 Cue the long-awaited return of Dave Lollback. This was your reporter’s first time to see The Ginger Typhoon at the wicket, though I’d already figured out that a man who would tolerate being referred to in print as The Ginger Typhoon without seeking either legal or physical retribution would surely be a strong character. This was soon evident in the way he set about getting the Sharks innings back on track, particularly in regard to sorting out the running between wickets. His first bellowed call of “Wait!” paralysed several old ladies in mid-stride two postcodes away, and Sankar soon got the message that a shake of the head or a wave of the glove is not the way to do it.

This pair settled in for the best partnership of the innings, putting on 56 for the third wicket and getting the run rate up to more than six an over before the GT was unluckily out for a run-a-ball 24, very well caught right on the rope at long on, the longest boundary of a longer-than-average pitch.

Anton struggled to find fluency against some tight Tsukuba bowling, and Sankar too was forced to slow down a bit as the opposition worked hard and successfully to reduce the run rate, with Sankar finally getting bowled for a hard-earned top score of 41. The two not-out batsmen, CT. and Mairaj, gave the innings an much-needed final boot up the arse with 19 from 12 balls and 11 from 7 balls respectively, but a 20-over total of 114-5 at 5.7 an over was always going to to take a lot more defending than last week’s stoutly constructed fortress of 166 from 17. 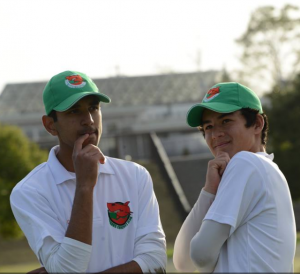 Defending the total would have been easier if we’d taken our chances early on, with a pouchable catch spilled and a comfortable run-out muffed inside the first dozen balls. Those two chances were basically the only sniff of a wicket we were going to get.

A few wide-ish deliveries got played at and missed early on, and there were a couple of thick edges that were safe enough in a slipless field, but from the third over onward everything pretty much met the meat of both openers’ bats, and they both soon began to look disconcertingly comfortable against a Sharks attack that, on the day, just couldn’t find a way to engineer a breakthrough. The Tsukuba openers knocked off the runs with 7 overs to spare at rate of more than 9 an over, with the more dominant of the pair hitting a half-century in boundaries on his way to 74. Can’t argue with that.

So, a defeat but not a disaster, four points dropped in the round-robin league, but the upside is that we’ll get another crack at them. The players who played today will all be well up for it, and with the Sharks impressive squad depth it’s a fair bet that next time we’ll have the edge in bringing big guns to bear on the battle.