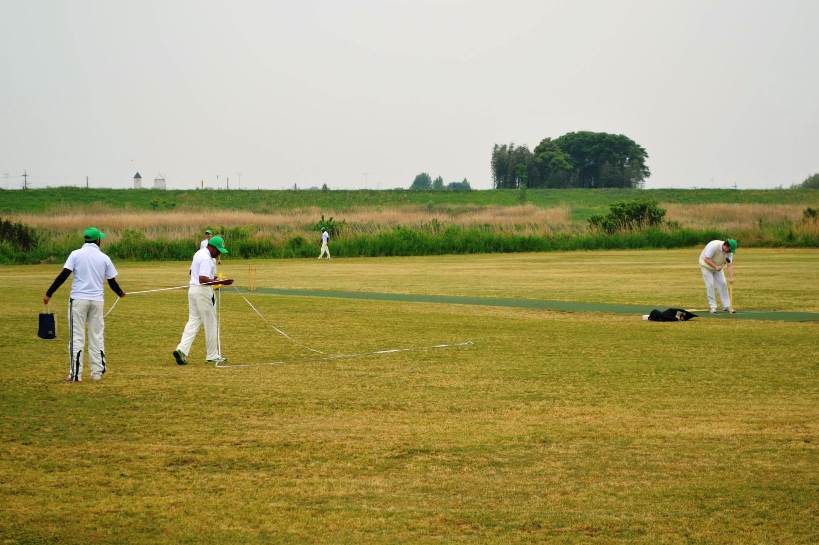 The fortunes of these two clubs at the start of the 2015 season could not be more in contrast. The Sharks have had a great injection of rare talent, established players are rejuvenated and everyone is raring to go. We also have new shirts! Paddy’s are dysfunctional, displeasing and, at times, disinterested. Add dismantled by one of the strongest Sharks line-ups we have ever turned out.

We basically batted and bowled and ‘kept from top to bottom and back again. A team of in-form all-rounders. We had four functioning wicketkeepers (Chris T, Sumon, Karthik and Asala). We had numerous opening bowling options (Vicky, Adit, Takady, Paul), we had first-changers (Dhugal, Dave, Hassan), we had spin (Asala, Sumon). As for batting, we had a top six order of about ten players. We even had a media centre. It was very pleasing. Still, it would mean nothing if we did not work as a team. After setting up the field, we set up the win by Dhugal winning the toss and batting.

Batting
Karthik and Birthday Boy Dave Lollback padded up and took to the field. It was hard to tell what happened next. No-one was too sure. Sharks were quieting down or finding gear. The scorers were still settling their expectant cheeks. Surely the batsmen have no idea because the first ball was tapped somewhere and after a fair bit of frantic charging about, both of them ended up at the bowler’s end. After a bit of nervous eye-contact Karthik had to leave. 1-0. 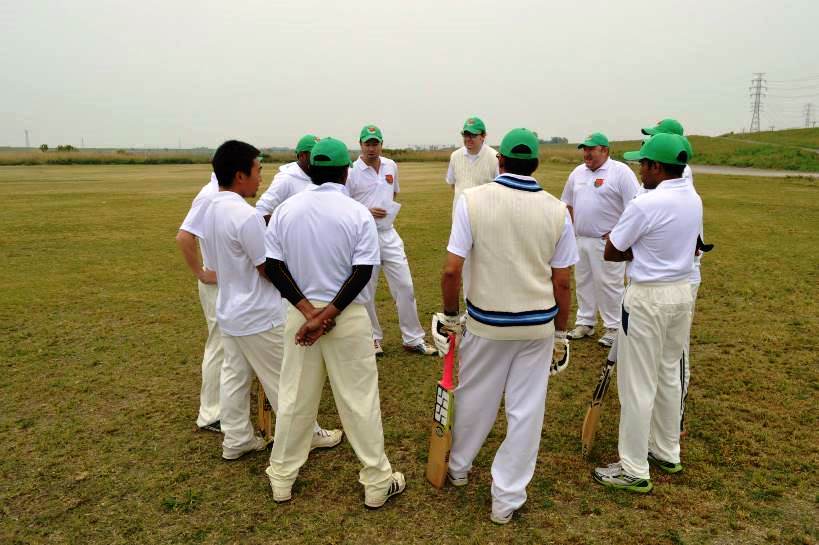 hugal in to join a visibly-agitated Dave and a bellowing Paddy Foley’s. Both players took their time to get in. Dhugal took a 2 and a well-run 3, but for many overs, dots and singles and wides dominated the scorebook. Our first boundary was a powerful Bedingfield square cut. Dave was a bit off-timing but a pulled full toss and drive off his pads found the rope as they stepped up the scoring. Dhugal was pushing the gaps for ones and Dave laced a boundary forward of point, but the change bowlers were hard to get away. Dhugal cramped himself and was bowled for a subdued 19. Dave tried to be next, skying one to a field which moved all day with bovine intent. He survived three consecutive LBW shouts until he shelved the sweep.

Takady in at No. 4 had foretold of runs. We did not have to wait long. It graced us. A classically compact Takady cover drive, full face and weight behind it, all along the ground and over the rope at the scorer’s tent. Beautiful! I think it calmed Dave who settled down and the pair proceeded to put on 94. Dave’s batting figures began to show more numbers that dots and Takady batted to his potential. They pushed ones to all areas, turning some to 2s as the fielders grazed. But when the boundaries came they were emphatic. Two bullet pulls from Takady. Dave’s own cover drive. A lofted drive over mid off from Takady. The scoreboard raced nicely. Then there was Over 21. As Takady said later, “Well, they were either full tosses or too short.” They also went 466.6.. mainly over square leg! Now 2-112. Another 15 runs followed including a lovely Lollback flick-tickle to leg. One more boundary saw Takady with his first Shark 50, but sadly the show ended with an LBW upheld. But if PF thought the scoring was to be held up they were very mistaken. At 3-140, Dave was joined by Hassan. 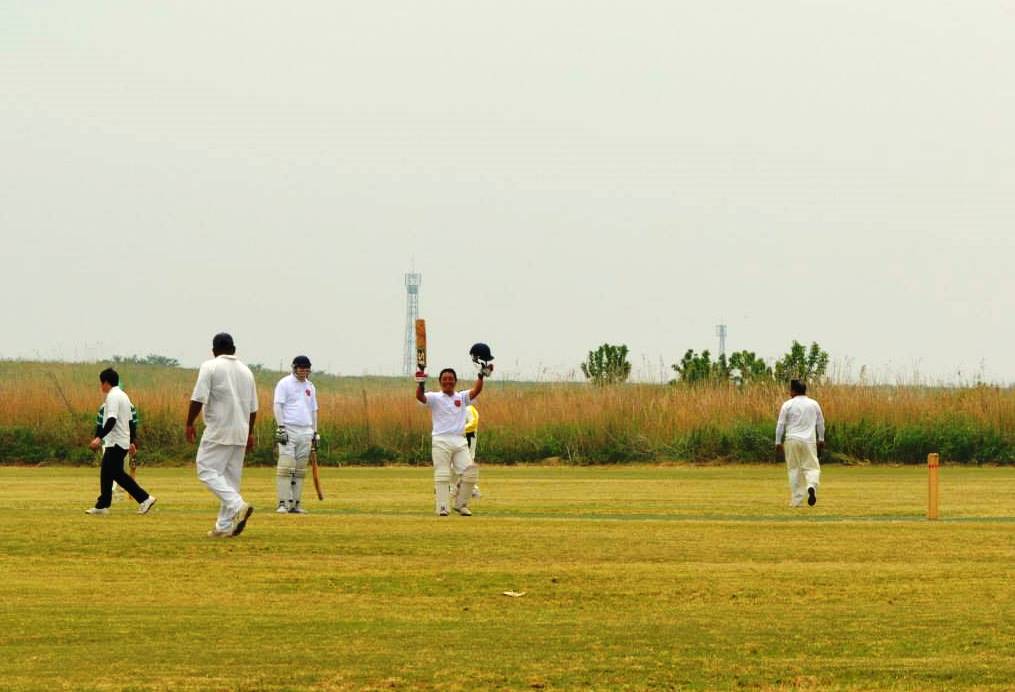 Hassan did not waste much time, find a three in a field with many cow corners and then showing his touch with a late cut to the rope. Energized somewhat, Dave placed a pulled 4 through square, one split the fielder’s legs and one behind point, getting to yet another half-century for the Sharks. He was tiring but still rattled off the singles before a catch was finally held. 4-196.

Hassan had been in high gear showing manic desire that either yield runs or massive waves of air, with occasional brilliant soft-handed touch. Never a dull moment with Hassan! After Dave departed, 67, spent and into his 42nd year, Chris T joined ‘The Roadrunner’. This would be interesting. Chris first six balls were all singles, to which I think ‘Huss’ ran 1.5 then -0.5 back. Hassan was eventually castled with one swish too many for a run-a-ball 37. 5-210 off 35 overs.

With 5 overs and a lot of batting to come (Sumon, Vicky, Paul and Adit) Asala joined Chris. Asala immediately launched to ball high to different parts forward of the wicket and while not finding the boundary the ball found grass. After six 1s Chris took one 6 going big over mid on in an 11-run over. It was a day of not only big hits but glorious ones as a majestic cover drive from Asala yielded three. It brought Chris to face. 6 over mid on again. Two singles. And 6 again over mid on. 4 down the ground by Thurgate for 21 off! Asala had been testing out the centre his bat but when he found it, he found it, picking up a length ball and sending it massively into the hill. Biggest hit of the day! He added some change for 13 off the 39th over.

Sule was given the joyful task of bowling the final over and Chris greeting it with a pair of 4s, rocketing the ball over his shoulder. Asala missed a mighty heave and was bowled with two balls remaining. Sumon entered and with envious and effortless grace caressed the first to the boundary in front of point. The next was a little more ‘agriculture’ for 2 runs.

Bowling
Nice to have some runs to play with, but Doogs was having none of that! The bowlers at the top of off stump and the field would be on every ball. A fired up Sharks took up their positions. The media centre heard the Paddys advised that once they see off our opening bowlers, Vicky and Adit, it would be easier. The media centre chuckled.
Vicky and Adit proved very difficult to hit but ‘see them off’ the PF openers did, without much scoreboard damage (0-25 off 7). But the ‘easier’ part was a bit ill-advised as Takady, Japan ace, and Paul, the bowling version of Genghis Khan sweeping down from the North, got the ball in their hands. Takady sprayed a few but settled into his usually good line. 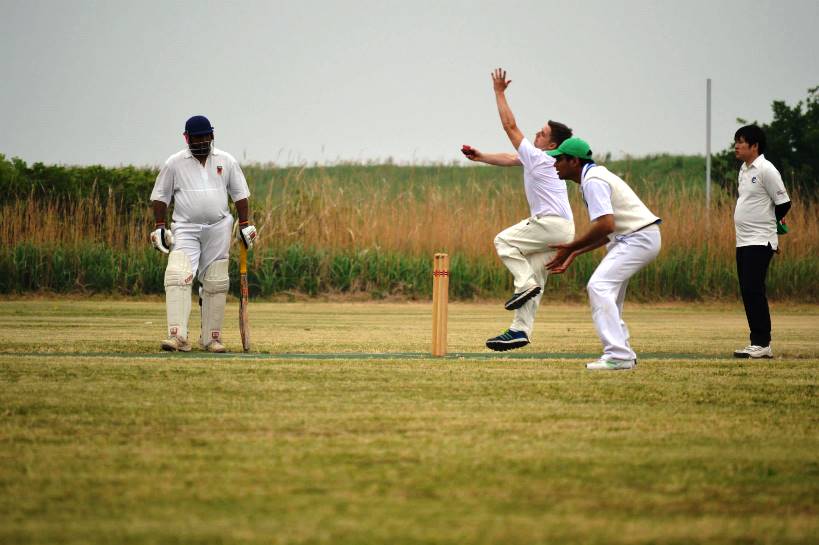 Paul just settled into his usual marauding through the top order. Play, miss, play miss, LBW. Another tight Takady over. Then Paul torments the batsman with five swinging dots until one finally gets a bit of wood. It flies fast and to the right of Dhugal at 2nd slip and he does not let go! 2-30. It was almost 3 when veteran Kamran poked it straight to Dave at point who could not hold on (Kamran was eventually to defy us for 71 balls and 44 not out – a great and gutsy effort!) Wicket maiden. Dave quickly made amends in Takady’s next over, moving well to catch a futile swipe to mid-off. 3-32. The PF tent drift off to consider the less stressful entertainment in the car park.

The next seven wickets went six bowled and an LBW. In his third over Paul gave up a 4, which he clearly did not like, so he removed some stumps and a batsman. 4-37. Takady locked down the other end. Another boundary was found in between the near misses and ball crashing into pads. Immediately after drinks Paul bowled out his spell with a run of wicket-maiden (4-12), a single (4-13), maiden (4-13), single (4-14). He was desperately unlucky miss another and well-deserved 5-fer when he could not hold a sharp return catch. Great spell yet again and well supported by Takady. Dhugal and Hassan replaced them. 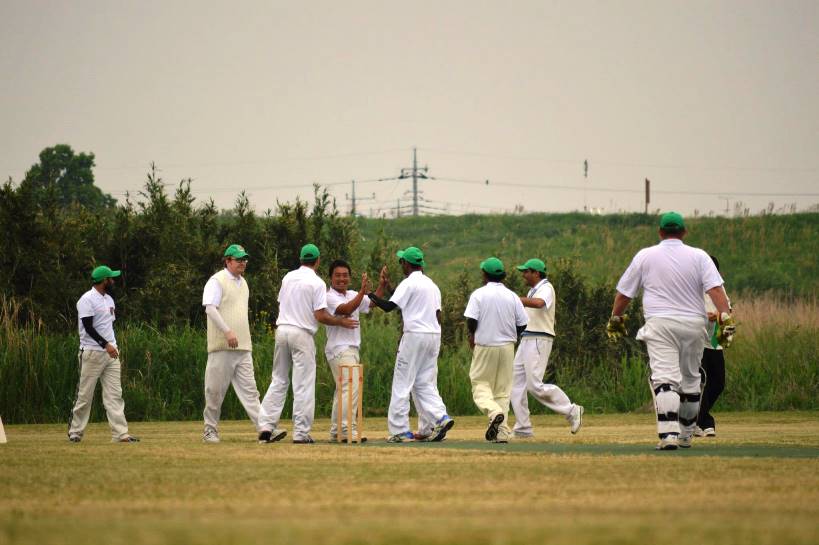 The Paddys, still over 200 in arrears, now settled into hanging about without much intent or ability to score apart from Kamran. This was in part the bowlers but also the field who chased down everything they could in cutting down runs and supporting the bowlers. Dhugal removed Sule’s furniture to have them 6-69. Asala was given a chance to roll down some offies. He kept Chris busy behind the stumps. Adit returned with a spell of 3 overs for 2-2 including a maiden, cleaning up the stumps in both cases. 8-90. Vicky also returned and just kept firing them past the bat but with no luck. The final rites were delivered by Takady. He also racked up quite a few free runs in a wayward start to his second spell, but came back strongly. After endless raps on the pad he nailed No. 10 who offered no shot. 9-113. In the field, he should have had another scalp as in the next over he fielded on the boundary and lasered a thrown at the far end to Chris who removed the bails. The square leg had other things on his mind. Not deterred, Takady returned to remove the batsman with his first ball. Paddy Foley’s all out 10-126 in 34 overs.

It was a very, very complete effort, both with bat and ball. With the bat there was a constant stream of partnerships: Dave-Dhugal (46), Dave-Takady (96), Dave-Hassan (56), Hassan-Chris (14), Chris-Asala (58). With the ball there was no respite against a huge battery of bowling options. Paul is proving almost unplayable but he was backed up great efforts at the other end. We are getting most of our wickets either bowled, lbw or behind wicket. The field is vocal and up. The only minus today was the 40 extras so if we can straight that up it gives us a great chance for more victories. Indicative of our game this year, by the end of today’s game, Sharks dominated the JCA Div. One batting and bowling leaderboards (six Sharks in the Top 10 in both skills). Next up will be the already selected 2nd XI going after the Wyverns. 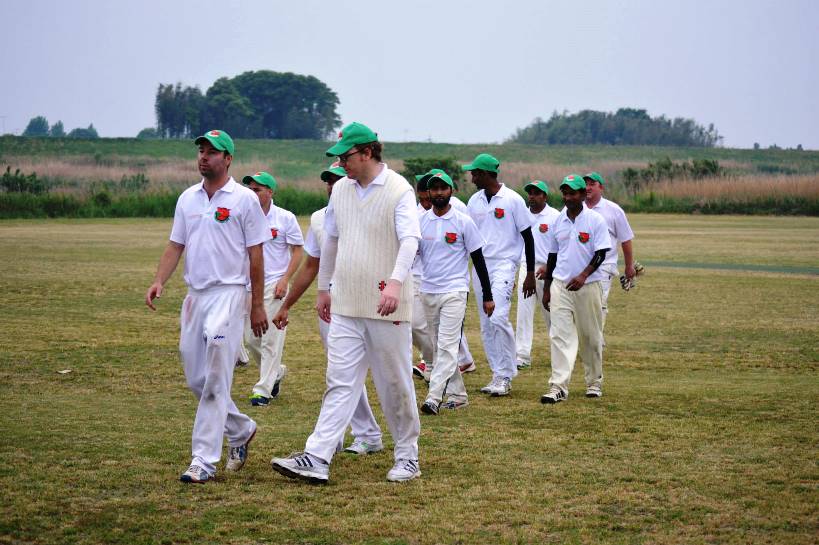