Sharks 2nd XI took on Paddy Foley’s 2nd XI on a damp, occasionally drizzly Saturday July 4th. With intermittent rain throughout the week and a dodgy forecast for the day, there was widespread skepticism that the match would actually take place. Nonetheless, we turned out a full team captained by the redoubtable KB and also comprising Anton, Sankar, Takady, Asasla, Molloy, Mairaj, Yosuke and Yu, along with 2nd XI debutants Ryo and Sanjeewa. A good solid 2nd XI! 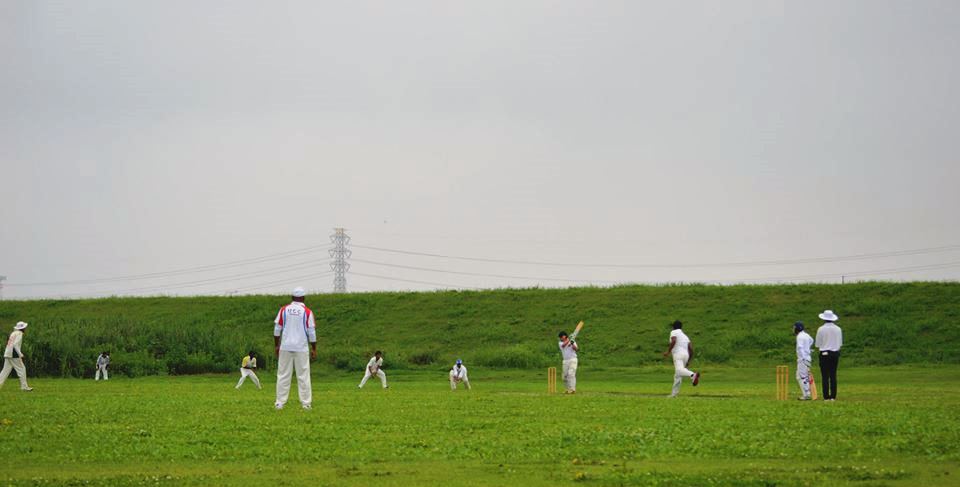 With a slightly wet outfield and several spells of drizzle, a cautious approach would likely be needed to avoid any slips or collisions in the outfield. In fact, we suffered one collision before the match even started, with Mairaj coming off second-best behind the wheel of his motor while making his way up to the ground’s entrance—no major damage or injuries, though, thankfully.

KB as captain began well by winning the toss and, after consultation, electing to bat, sending Anton and Sankar out to open the innings. 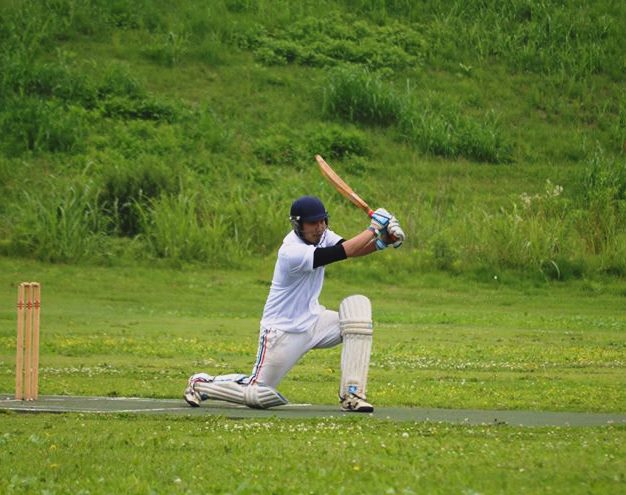 Batting
Anton faced a baptism of fire in the first over, with Paddy’s opener Uddika probing around off stump and swinging the ball away at brisk pace. Unable to quite see out the over, Anton was unfortunately burned fifth ball to one that pitched middle and leg and took the top of off.

Sankar was then joined by Takady. Takady struggled a little for fluency in the face of consistent swing and a number of nasty short balls from left-armer Krishantha and Uddika. After having little of the strike, Sankar eventually skied a fuller ball from Krishantha and was perhaps unlucky to be very well caught at cover.

With two wickets down and only eight runs on the board, Takady and debutant Ryo knuckled down and began to rebuild the innings, aided by a steady stream of wides and byes. Boundaries proved elusive, largely due to the sluggish, waterlogged outfield, and Paddy’s bowled aggressively and with generally good discipline.

After offering a couple of near-chances that narrowly eluded the fielders, Takady made a questionable shouldering-of-arms only to see his middle stump uprooted. He lasted 30 balls but vitally took the brunt and best of the opening spells. 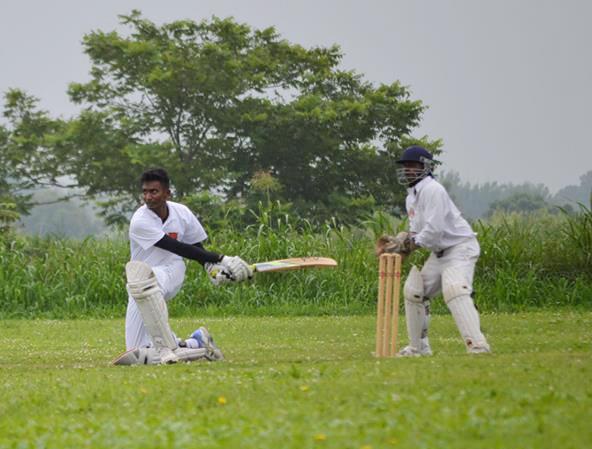 His dismissal brought to the crease Asala, who shared in an excellent partnership of 65 with Ryo, hitting two sixes in a well-made 31, including one eye-raising slog sweep off the tidy off-spin of Sanjeewa (Paddy Foley’s edition) that ended most of the way up Ōguchi Hill. Ryo, meanwhile, appeared solid, composed and played with striking fluency from early in his innings, despite the team’s precarious situation. For the most part, he played within himself, and straight, and looked to rotate the strike without playing any loose shots. While only hitting two boundaries, he maintained a healthy strike rate of 68 on a slow outfield and top-scored with 44. Great debut!

Both men were eventually bowled by off-spinner Sanjeewa, but not before laying the platform for a decent innings total. Some work was left, though, for the middle order. Molloy was tied down somewhat in his comeback innings, but would be pleased to have middled a few balls before being caught at mid-off, playing an “Agnie Consulting lofted forward defensive”. KB joined the fray. Yosuke was playing well and was gaining momentum nicely and looking to launch an assault at the end. 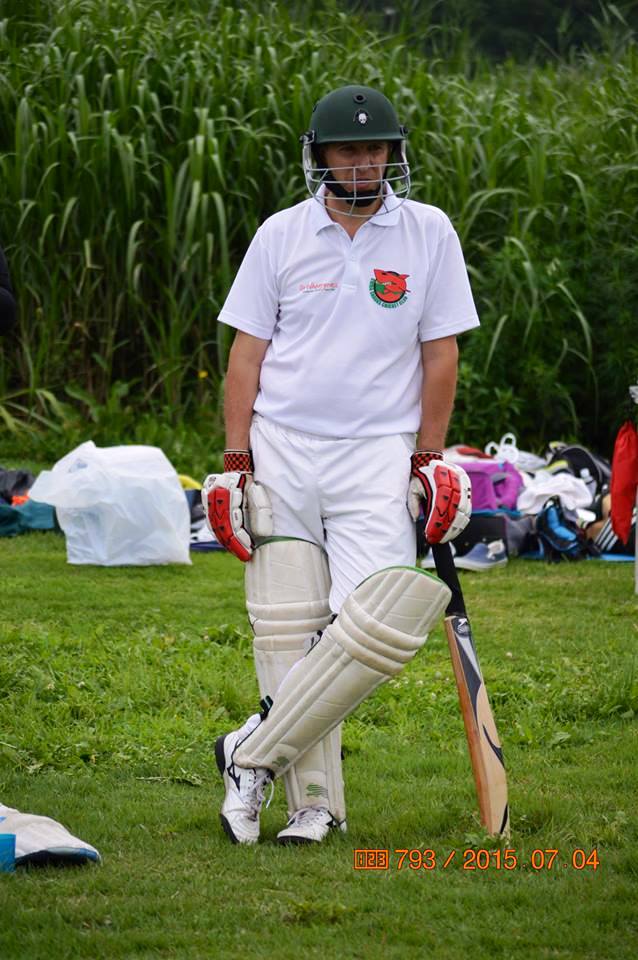 At about 35 overs KB gave license to Yosuke to have a crack but instead he and then Sanjeewa went. Mairaj then joined KB and dazzled with a sparkling 14 off just five balls, the highlight of which was a crunching “Doctor Wheatgrass whip through midwicket” for four. Captain KB, rolled back the sundial, again, with a fine cameo of 15, running four twos (and probably as many for his batting partners). They pressured the field with good positive running to remain not out.

In the end, considering our mainstay bats fell cheaply, we reached a solid total of 177, which represented a good fightback after losing early and significant wickets. Paddy’s were perhaps a little sluggish in the field, but generally bowled tight lines and made scoring difficult. The wet field also pulled up certain fours (only 6 were hit).

Bowling
Heading out to field, we were cautiously optimistic about defending 177, but knew we would need to be disciplined with the ball from the start and hold on to any chances that came. We were missing any out and out strike bowler. KB had opted for a ‘pace-spin’ combo policy to make Paddy’s both go for runs and have to clear the soggy outfield under their own steam.

Also providing an element of surprise. Takady opened proceedings with his nippy off spinners and instantly had left-handed opener Jeewaka entangled in a web with glorious bounce and quickish spin. He was unhittable. From the other end, Yosuke bowled with good rhythm, swinging the ball away from the right-hander.

Before long, Takady claimed two wickets in quick succession—both caught in the gully/point region, with Sankar, backpedalling furiously at first slip, and KB, settling comfortably under a high ball at point. Ryo at square-leg made it a 3-wicket over when Asala made a smart take to effect a run-out off a sharp throw. Yosuke quickly backed that up with another wicket thanks to a brilliantly parried catch and take by Sanjeewa at short midwicket. As FOW of wicket showed it was a sudden kick in the balls.

Sanjeewa then took a turn at the bowling crease in his debut and displayed impressive control and solid pace, with a dash of outswing and rising ball for good measure. He was unlucky to have an edge fly between the keeper and first slip, but helped keep the run rate in check through three economical overs. Meanwhile, the assassin, Sankar lived up to his JCL Leaderboard billing by claiming two wickets in his first over—one bowled first ball off a full-length delivery, the other very well caught lowish and at full pace in the point/gully region (again) by Takady. 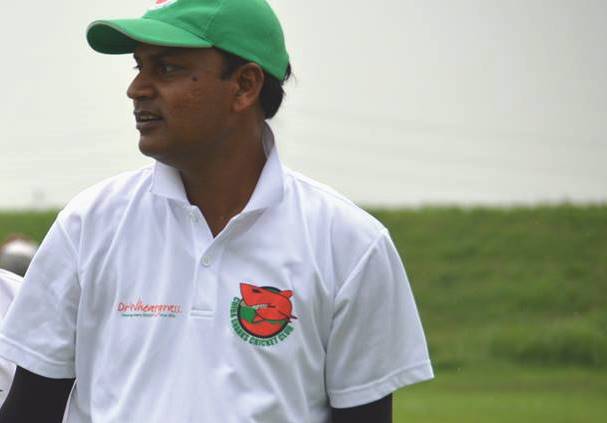 At 27 for six, Paddy’s looked just about done and dusted, but star performer Uddika had been resting up quietly and other ideas. After drinks he comfortably worked singles and put the bad balls away to the fence. For our part, the Sharks probably dropped off in intensity somewhat, with some stray offerings from the spin of Molloy and Anton and an ‘experiential’ over from Hamamichi. Some dropped catches started creeping in too, and with the score at 84 for six it seemed the momentum was turning away from us as Uddika gained confidence.

However, with a bowling change, the Sharks then took three quick wickets. An LBW to Molloy was followed by two for miserly off-spinner KB, who introduced himself late. The first was a comfortable, nice catch for Sankar at slip and the second another LBW. The Sharks’ captain also showed his commitment by gamely blocking a firmly struck Uddika drive with his shin. Despite sounding like his leg had been snapped in half, KB shrugged it off—at least initially, anyway.

With Paddy’s now nine wickets down and still requiring 85 for what would be an unlikely victory, it seemed we could breathe easy again. But Uddika continued on his merry ways and was aided by a sensible knock from no. 11 Sanjeewa. The pair found gaps, worked the strike and started to clear the field. KB turned back to strike bowlers Takady and Sankar, and the latter eventually ended Sanjeewa’s dogged resistance with a ball that snuck through to hit timber. Paddy’s finished all out for 127, with Uddika unbeaten on 62 from just 51 balls.

All in all, it was an encouraging performance by a team featuring several newcomers and 2nd XI stalwarts. Amazingly the 2nds were able to play all their six scheduled games this year and finish with a decent 5-1 (the one that got away)! The Sharks maintained their spot at the top of Division 2 and thus emerged from this match unscatched, aside from a couple of hefty bruises to their legs and front-right bumpers.