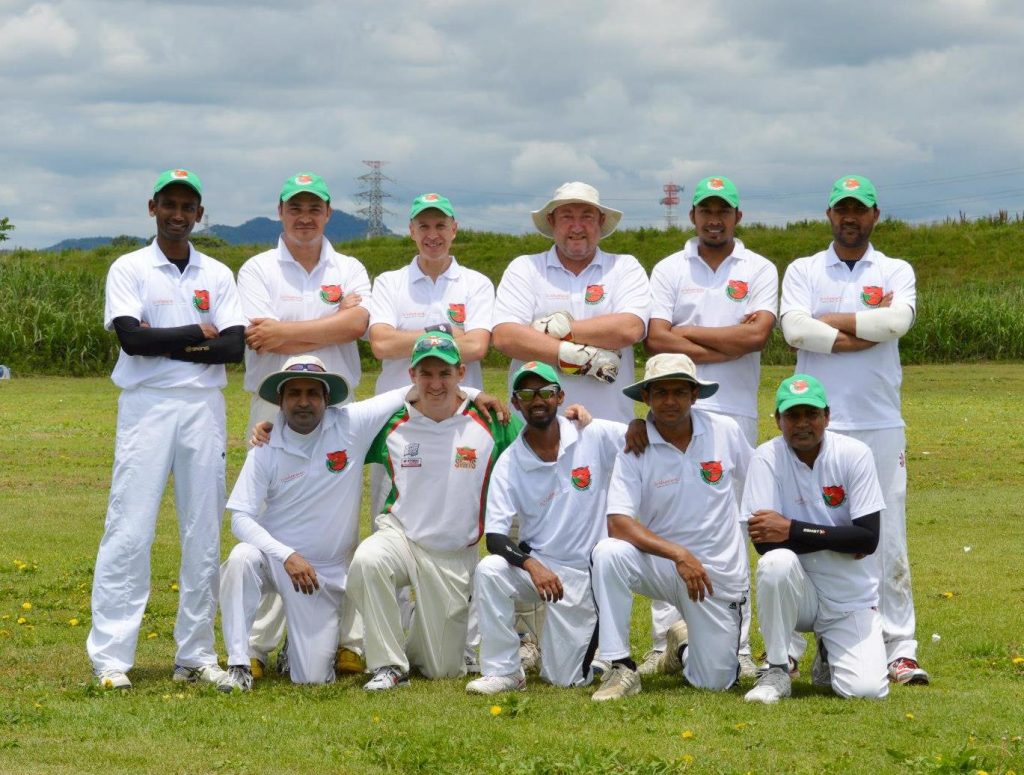 It was with a certain sense of trepidation that the Chiba Sharks 2nd XI stumbled out of their various carriages and through the bushes surrounding the glorious sun drenched Sano1 ground. Given the rain the day/night/morning before, nobody had seriously expected to be here.

On breaching the undergrowth however, the Sharks were greeted with the charming sight of Sano 1 showing all of her late spring charm; an emerald and ochre speckled outfield, alive with little white butterflies and dandelions. Through the middle lay the batting track, looking a little cleaner than usual thanks to the rain, but steaming off nicely. The bowlers run ups were soft but good to go. It was game on!

The Super Seconds turned out in fairly familiar order: Asala, Sankar, Naz, Murad, Sayeed, Anton, Chris T, Viv, Paul, KB and of course the ever ready Mairaj. Paul’s sister Cath was also in town and took on the role of photographer and commentator for the day. Chris won the toss and decided to see what Fuji Far East could do with the bat. It was a decision that paid instant dividends.

Bowling
Viv and Paul were handed the shiny Red King and Viv opened up from the embankment end. He looked up for it from the get go, coming down the slope to find bristling pace. The batsman had an airy waft at the first and cocked his head tentatively. The second ball accounted for the top of his middle stump.

Just the early breakthrough the Sharks were looking for. From the other end Paul teased and taunted the edge of the bat, behind which, in a graceful arc, hung 6 pairs of hands, waiting for the edge that threatened to come amid the oohs! and ahhs! of every ball.

Viv continued from the embankment end and soon had Tsutsui’s furniture cartwheeling down to the river with an absolute peach of an inswinger. Meanwhile Murad got the dropped catches collection started with a sitter at mid-wicket. He didn’t have to rue the error long as the Vivometer was cranked up a notch and Nakagawa found himself looking back at the wreckage of his woodwork. FFE 21 for 3.

KB took over from Paul and applied his testing line and length loopers to the fresh batsmen. Plenty were missed but some were met with lusty blows that sparked the FFE scoreboard and scorers into life. Mairaj was offered a spell at the other end but graciously declined as he could see Viv was in “the zone”. Viv repaid his teammate’s confidence by bending back Naoto’s middle stump. 4 scalps, all clean bowled, to the 19 year old paceman. 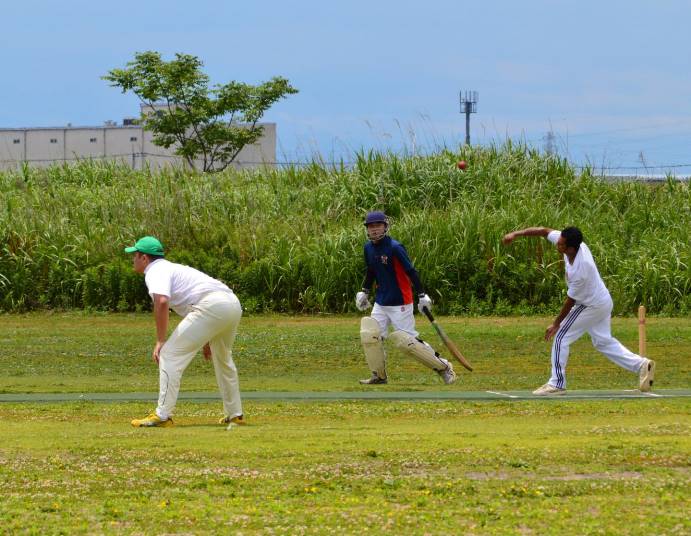 Murad gave Viv a breather and, always accurate, probed away outside off stump getting hit by some crude looking but effective shots. Anton added his name to the crimesheet by carefully juggling a catch to the deck at short cover. Stumper Thurgate couldn’t quite cling onto one behind the pegs either. It was getting a little bit infuriating. Mairaj settled into a good line and flight fairly quickly keeping the batsmen honest. The field was waiting for his secret weapon, the infamous slow bouncer, but he kept that little grenade dry for another day. He was unlucky not a pick up a wicket when Viv shelled a practice catch at mid-off.

Anton delivered his normal array of tosh and top notch. Someone normally gets themselves out when he is bowling though and today was no exception. The batsman spanked it out to the covers but didn’t budge as Murad was quick to it and threw it back to the bowlers end. Anton caught it, lost his balance and ended up on his ample arse. Anchored thus, he threw down the stumps vacated by the non-striker for a useful run-out.

Next ball, a decent inswinging Yorker, clean uprooted middle stump. The Sharks looked at each other in disbelief. Some asked the bowler what he thought he was doing. Even the umpire didn’t want to give it out but alas the batsman had to go. FFE 68 for 7

The rest of the Fuji Far East innings was a Paul Grant catching masterclass. The tail had blocked out over after over but it wasn’t getting them anywhere. When the last two blades decided to go for broke, their youthful eyes picked up anything short and the ball was sent around the park. The ball was often airborne though and Paul took a great tumbling catch at a widish mid-on position before closing the innings with an acrobatic one handed catch of a rocket going over the covers. Stunning stuff!

FFE all out for 126 (incl a rather ugly 39 extras). Not a bad recovery by their late order considering the carnage caused by Viv early on.

Batting
Sharks set about the reply with the eminently stylish blades of Murad and Sankar. The latter picked up where he left of last time here, late cutting remorselessly through the oft vacant third man position. Murad got into stride in his more conservative fashion offering the straight bat and settling for the odd single in the rare moments that he got the strike. 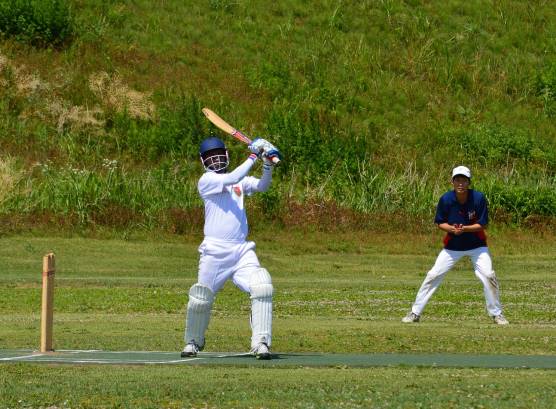 The bowling was wayward at times but both batsmen stayed alert, waiting for the one that landed on the pitch and dispatching it with an economy of effort. Sankar started moving through the gears, greeting the good ball with a straight bat and flaying the average ones to the undergrowth. Murad decided to push on too, blasting some crackers through point and driving assuredly through the covers.

With the run rate buzzing along at about 9 an over everything was going swimmingly. Both batsmen were set and the bowling attack looked to be in some disarray. Sayeed was waiting in the wings, quietly wondering whether he would ever get a chance and the fourth man on the list was padded up just for show. Our regular readers would be expecting a batting collapse about now but…well you’re right. We had a mini one.

It needed something spectacular from FFE to shake the Sharks out of cruise control and Eguchi provided it with a fine catch at deepish cover from a speculative Sankar pull. He’s a changed player this term and departed after another great knock of 33.

There was to be no relief for FFE though as Sayeed swaggered out to the crease took his traditional one ball sighter and then sent the fielders for a day trip in the long on flora on a ball hunt. Fuji Far East brought on their own secret weapon in the form of Muraki. He started out looking a bit slingy but soon warmed up and flung down some Malingarish looking nasties that whipped into the right handers at pace. One seamed back in sharply, bewildering Sayeed who watched it carefully onto his stumps. Sharks at 71 for 2. 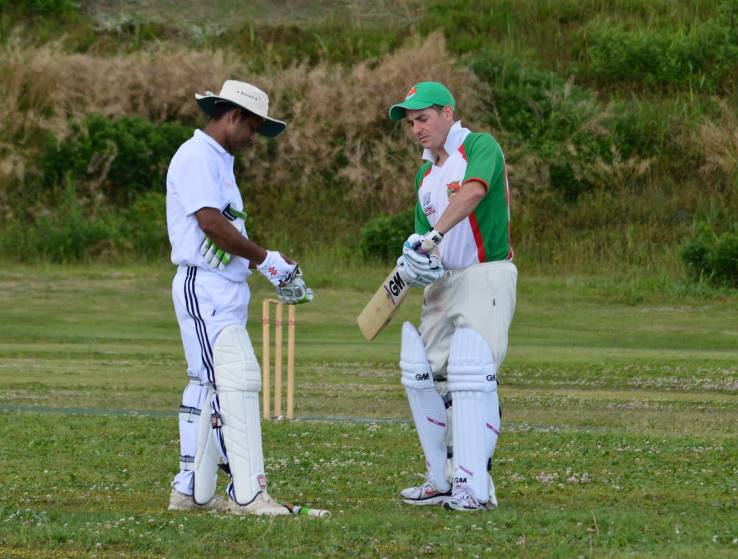 Anton joined the confident looking Murad in the middle and the two negotiated a few overs of decent bowling from FFE. Nakano had struggled with leg side wides but adjusted his radar to send the same action into the batsman. Muraki, buoyed by his dismissal of Sayeed, got the ball to spit of the pitch causing the odd raised eyebrow at the crease. Not getting much joy out of Muraki, Anton attempted to agriculturally hoick Nakano over cow corner but found the hands of Naoto instead.

Paul looked to settle matters in quick time, driving beautifully through the covers for 4s and getting full value over the top into the long-on bushes. All the while Murad busily plundered 1s and 2s through all areas of the field. The 100 was quickly reached with both batsmen looking imperious. Paul got unlucky though as a Nakagawa delivery stayed very low and skimmed under his bat into the stumps. Paul was not to be the helmsman to guide the good ship Shark to victory today.

That role was left to the Naz….Naz was not to be the helmsman to guide the good ship Shark to victory today. Caught 3rd ball.

Right. How about Asala then? Asala went after the bowling in his usual composed way and the target of 127 was reached with a cracking 4 down the pitch from his whirring willow. Murad had carried his bat and been the bedrock on which the Sharks reply was built. He looked pretty happy with his carefully crafted 38.

All in all then, another solid win for the Super Seconds. Yes, there were mistakes but the team backed each other up all the way and that proved to be their greatest strength. The spirit around the side is excellent and the players are improving, pushing for 1st XI slots.

Many thanks to Fuji Far East for a great match and to the Max Umpires who were basically flawless. Next stop is table toppers Adore. A win against them would really show how far this side has come from a year ago. Do it Sharks!