They say that to make the best chips potatoes need to be cut into decent pieces of length and thickness and boiled a little to soften them. The outside should be scuffed up then they are ‘double fried’ (a cooling in between), making them crispy on the outside but light and fluffy in the middle. It seems to happen to cricket teams, too. The Shark 1st XI endured a second weekend boiling, scuffing and deep frying in the Tatebayashi oven resulting in a thoroughly cooked effort with the bat.

The Sano team is almost unrecognizable from past years, almost on a weekly basis. What they do have is a batting depth that views the ‘V’ as a flight path rather than a field of play. We did not help ourselves with a poor time in the field and sometimes bowling lines that fed their limited but effective tastes in shot selection. The Sharks were only 10 today with Dhugal leading out Sumon, Murad and Nazrul (Rising Stars duties done), Viv, Paul, Shakriya, KB, Vicky, and Prashant. We lost the toss. Obviously. Habitually. 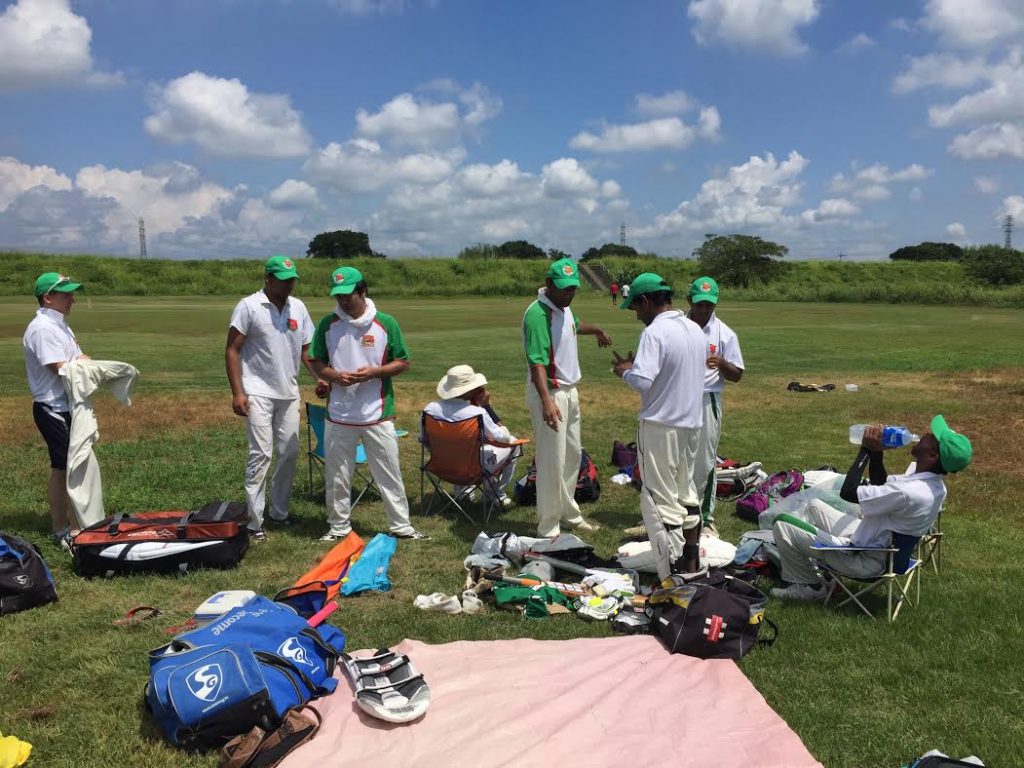 Bowling
0-60 off 6 overs… The main tormentor dropped once at deepish mid-off and then deepish mid-on. PG, Vicky and Viv had no answers to the ‘see-ball-hit-ball’ mindset. A small crack was opened finally by Viv and Paul got well-under a catch but generally were more ball foragers than effective fielders. KB got his burning mitts on the ball. His Ball of the Century (20th and 21st) curved, dipped, pitched a tad outside off, spun past defense, hit middle 3/4 up, stump back at a pleasing angle, tormentor off! But we drudged off to very welcome drinks with a big unwelcome mountain building.

We came out the other side with renewed intent, which saw us hit back with three quick wickets with the ‘Viv Show’. Vivek yet again rattled the woodwork to make it 3-138. Viv then took a great catch in the deep, dancing around the rope at long off. 4-142. Viv then fixed up the new batsman first ball with a catch to the sure hands of Murad.

But Sano still kept slogging against a now tiring attack and short boundaries. Another wicket was finally achieved with a KB LBW. 5-176. From this point Aravinda led a second major assault until Vicky finally had him pulling full blooded to Dhugal. This did not stem the runs however. Viv (bowled) and Dhugal, via a great catch by Vicky who took one of the highest skiers this reporter has ever seen, made a couple more strikes but we stared 332 in the face at the end of 40 overs.

Being honest without being too critical, because umpiring is a hard gig and harder when there is only one of you, we might have had a couple of LBWs go our way but in the overall figures it made little difference. It may have given Viv a well-deserved 5-fer but … A couple of dropped catches taken would have lessened the pain, but we were generally very sloppy and saw as many overthrows go through as we have allowed in a couple of entire seasons combined, I reckon.

With the ball Dhugal was let down by dropped catches but got very good time and value into his leaping offies. KB mixed a couple of filet mignon steaks with a sack of boundary-bound kibble. Paul’s surprising return means someone will pay dearly down the line. Prashant got whacked. Viv just keeps racking up the scalps. He came back well after a rough start but in the process knows he still can improve and bowl to circumstances.

Batting
We had a decent top five but a couple or more would have to dig very deep and also score heavily. Despite our successes we have rarely batted to our potential this year (keeping it for the finals we hope) and while no excuse, the toss can have an impact. It is not much fun to be knackered then have just ten minutes to pad up to start a probably unrealistic run chase.

Sumon and Prashant had that unenviable task. Both were back with 5 apiece and Dhugal soon, also for 5. 3 for stuff-all. Deja vu? Day to forget! There was some controversy as PG walked when he could have stayed put. Later Nazrul had to go unnecessarily. Vicky got stuck in but could not sustain. But, there is not that much to say about our other individual innings’ except for Murad, so I will write about Murad.

Murad joined the growing 2015 list of good individual efforts by Sharks. He dropped anchor, occasionally weighing it and wielding it on his way to 45 not out. It was not always pretty. He scraped at times and made the most of some ‘lives’ but at times he returned fire, lacing a couple of boundaries into the thickets either side of the wicket. He was perhaps let down by the last couple of batsmen who should have stuck around to see him to a deserved 50 – sorry, mate!

Overall a dissatisfying day for a number of reasons. Besides losing in that manner to a team we just can’t seem to beat, it allowed Sano outright top position in JCL Div. 1. This gave them another pathway into the Japan Cup. It denied us the same and means a number of today’s team will also have to back up the next day in a now ‘must win’ T20 semi against Indian Engineers, who have clear designs on the yet distant finals.
We bowled okay at times. We fielded badly. We batted poorly. We basically served up a load of rubbish at times. We can and will need to do better.