Straight to the point – an absolutely magnificent, marauding, merciless, but always smiling, Chiba Sharks 2nds took the happy-go-luck Adoré apart at Sano 1. Imagine a shiny, muscly, stainless steel, hi-tech juicer-blender, with lots of buttons. Now imagine a block of tofu – kinu. Add an umpire and a few spicy patches on the wicket. Push start. The whole game only lasted 25 overs – more or less finished before the scheduled lunch break.

Coming into season 2015 the always-feisty Sharks 2nd XI had won one game since their 2013 debut. We now sit atop the Division 2 tree with four wins in five (could have been five). The loss of senior My-Ys for this season due to studies has more than been covered by a big injection of new talent into the Sharks and maybe other kinds of injections could account for the amazing efforts of the upper age-bracket members!

The rainy season had eased its fat, soggy arse onto the Japanese archipelago’s furniture this week so a game looked unlikely, but play we did, and at our favourite Sano 1 ground, with the Tone River Boat Launch at one end and Ōguchi (大口) Hill (formerly Commentary Box Hill) at the other. No boaters brave enough today on the swollen river and only an interested cyclist with a camera briefly disrupted the skyline over Ōguchi Hill. A lone GF supported Adoré and the Asala’s were our side, so we whipped Adoré into a thick paste in relative privacy. 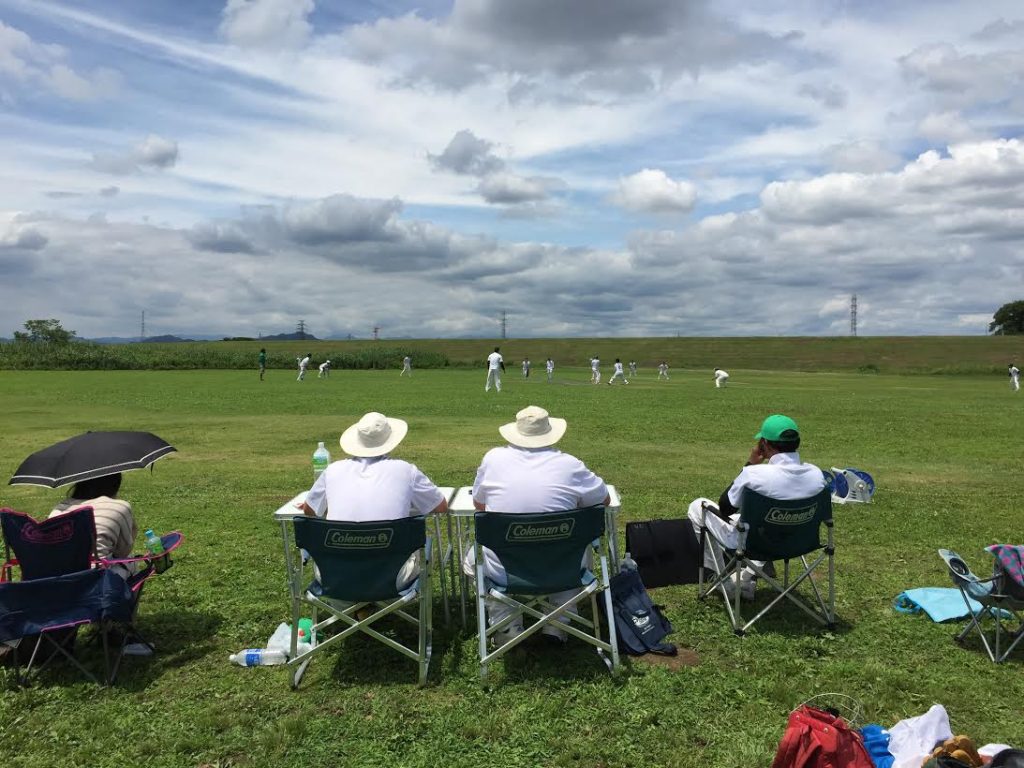 Our 2nd XI were Chris (capt & ‘keeper), KB (vc), Mairaj, Murad, Nazul, Vivek, Takady, Anton, Aditya, Asala and Sankar. Chris had hoped to bat but lost to toss and we took to field, ready and willing with the help of our sponsors, Dr. Wheatgrass.

Bowling
Adit opened up from the Boat Launch end. The ‘Removalist’ went wicket-less today but he did remove several million stray nitrogen atoms from the air just outside the groping edges. What he was sending down was just too good for Adoré today. But as he always does he puts the pressure on immediately and 4 beautiful line-and-length overs for 2 runs, edged, set us up.

At the Ōguchi (大口) Hill end it was a more brutal story. Maybe the pitch had damp patches from the rain over the week. It was a bit overcast and steamy. Viv had a red ball in his hand. At extreme speed for this level it was going past bat, pad, off stump and Chris was taking it down legside. Two balls was enough for previous match centurion Umair, and in a season of Viv ‘balls of the season’ the newest edition ‘ball of the season’ pitched on off, swung in, clipped an edge and if not interrupted by Chris’ oven mitts it probably would have been a six!! Viv then proceeded to hit at will a piece of rough carpet that got the ball up to throat height. He was looking dangerous in all meanings. He had the batsman on the back foot and I don’t blame them (I would have been in the back seat of my car cowering in wet-pantsed fear!).

Both Takita and Hashiba were very brave in the face of such unpredictable hostility and even wore a few before Viv cleaned-up the stumps of the former with the last ball of his spell. At one stage we had more overs bowled than Adore had runs, and most of those were self-inflicted wides. 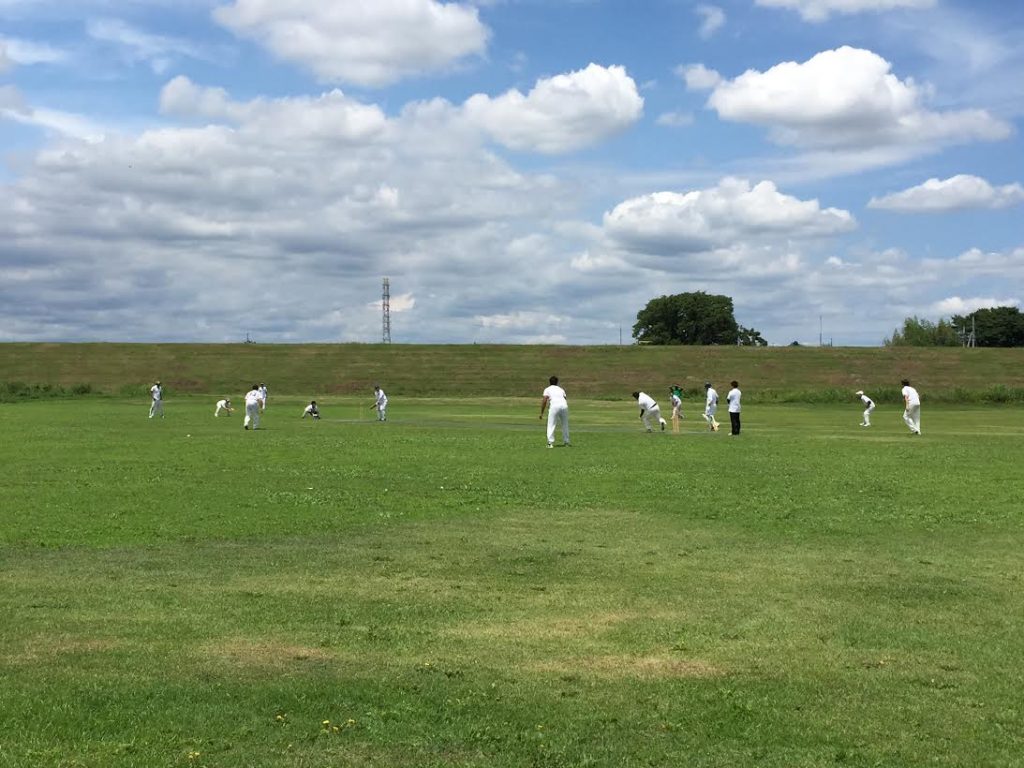 The bowling change only opened up the procession of successful bowlers, innovative batting stances and wickets. Takady from cover provided a stream of intelligence on each incoming batsman. It hardly mattered as none got past double figures. Sankar was back after a bit of an injury and immediately trapped Hashiba full on the pads and the finger was raised. He, too, was bending it in all ways, confusing the struggling batsman who with each passing ball announced, “Kowai! Maji kowai-su!” (he is lucky to have missed a ‘Vivek section’!).

The double change had Murad at the Ōguchi end. Murad maybe found Viv’s patch because he extracted unplayable bounce on his spinners, giving both the batsman and Chris a working over. An edge to the growing close in ring always looked likely. Also, any scoring of any kind had stopped. An attempt to get going only ended in Takady’s hands.

Takady, bowling spin due to injury, replaced Sankar but was no respite. It kicked, it spun, it hit Chris in places he would prefer it did not. It did everything but hit pieces of wood of any description. Approaching drinks at the 15th over Murad was not done yet. The expected edge did not come but a very sharp caught and bowled did and was taken.

Halfway through Adoré brought the familiar face of Hasnat to the crease, Rising star to meet Rising Star. The first two balls disappeared to the rope. The third was also on its way but found Adit waiting for it like a No. 10 bus. Hasnat on his way, Sharks to get a drink, Adoré 6-35 off 15 overs.

We had done very well, obviously, but Chris reminded us we can let things slip after good starts. On resumption, after a great spell of 3-10 off 3 by Murad had removed the middle order, KB took up the ball. On the spot from the start, a bit of a loose one got better than it deserved and that man Murad was still in the game. 7-35. Takady went one more but was unlucky to not to get a wicket. KB’s second over even excited himself; A tempter was unmolested. The next kissed the outside of off stump. 8-36. A nick took edge, pad and nearly ‘keeper/slip. An inside edge bounced over top of leg stump. LBW (hmmmmm) turned down. Inside edge hit top of off. 9-37. Mairaj had the honour of removing the final batsman. Deadly slow bouncers? It took two balls and a bit of a mow at a good rising ball ending with Takady’s mitts at mid-off and this ended the innings. Adoré all out 37.

We do not usually include the opposition batting, but this is an exceptional case.

Sharks were very sharp in their ground fielding today. Asala was basically impassable at short mid-wicket and probably saved a number of boundaries there. Mairaj has prowled deepish mid-on like a caffeinated big cat all season, but one pounce and clean pick-up today stopped both the batsman and teammates in their tracks – reminiscent of the great Clive Lloyd! We have rarely needed people on the boundaries as Chris has constantly been able to set very aggressive fields. Everyone is buying into it and with Harry Highpants in all his high-waist, ‘lift and separate’ glory at very short mid-off, the Adoré view from the batting crease must have been unsettling if not disturbing.

But the best feature was the catching. We bagged six. First, Chris calmly took the still rapidly rising feather touch from the opener off Viv. Takady took two: his first at cover off Murad was the easiest he will ever get (he could have been reading a manga with one hand and still caught it); the other off Mairaj also did not trouble him. He almost got a spectacular ‘selfie’ off a low stuck drive. Murad also got a set. One, a ‘baddish’ long-hop from KB got a top edge and Murad moved smoothly around to backward point – safest hands in the team. His next was a successful selfie. Struck on the bottom of the bat, the ball flew hard and straight about ten centimetres off the wicket. Murad went down low and forward, catching it for keeps on the second grab. Great reflexes and catch! Finally, Adit had plenty of time to consider a ball clobbered by Adoré/Rising Star, Hasnat, to deep mid-on on the rope, where Chris had just put him. He barely had to move as a good hands/midriff/crotch combination secured the wicket. 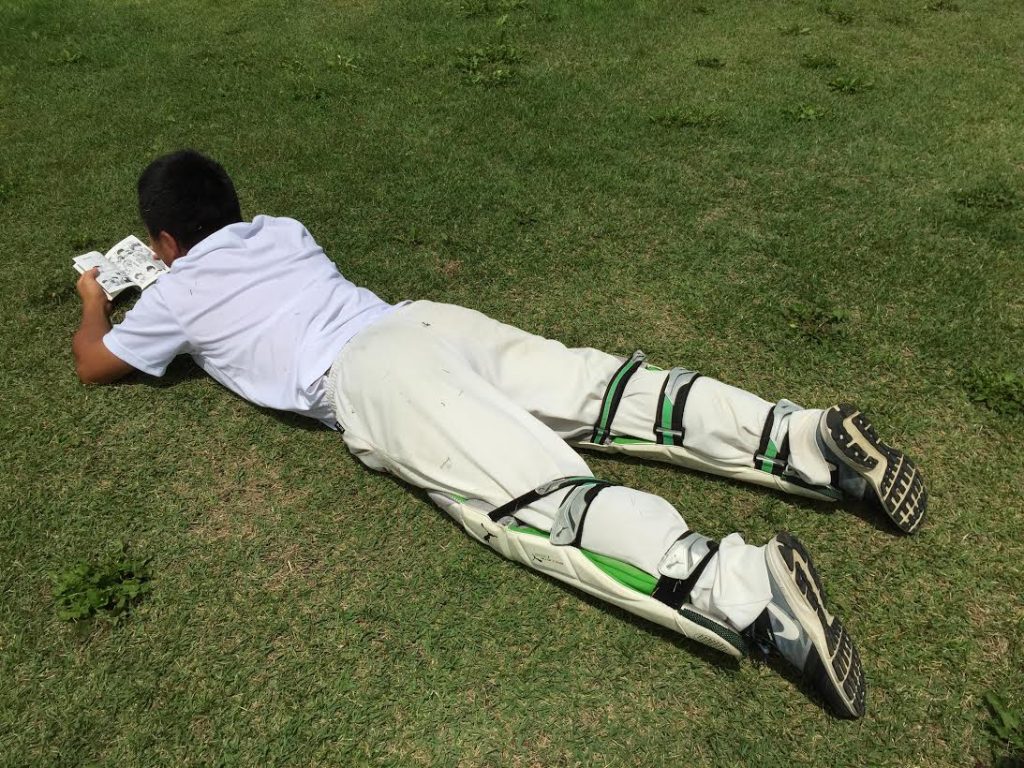 It was clinical by the Sharks. Granted, Adoré have only one team and it is Div. 2, but to get all batsmen under double figures on Sano 1 is a fine effort. Our extras were 15 but I think that we only sent down 3-4 actual wide balls and there were also four overthrows, so about 18 off the bat was amazing. We had a ten-minute turn around.

Batting
The Kazi-Prodhan combination (66 vs Wyverns2, 43 vs FFE) has been a rock this year. With 38 to get it would be interesting to see how they would approach a low target. They took guard; we took tea. Murad and Sankar are garnering a great understanding. Keep good ones out, good calling and running, smack the daylights out of bad ones. It was very sensible and they did not blaze away. Both worked the area over point for boundaries. Probably a few loose ones should have been dealt with and a sky to deepish long on fell to Earth via a pair of hands.

I think they were both determined not to be the guy ‘out’ and that is a great attitude for an opening pair. Takady at No. 3 was relaxed in his preparation (12 pages of manga in 5 overs) and Nazul at No. 4 played his innings in his mind because it was as sure as could be he would not get a bat. Between them half the score came in boundaries in a boggy outfield and most of the rest were from sensible placement. A four ended the innings, 0-41 in six overs.

Consummate effort by the Sharks in all facets of the game, really. Adit and Viv are Div. 1 quality bowlers so any team will need to play well. Takady, too, but he was bowling spin. Eight wickets were taken by Div. 2 players and neither Anton nor Naz were uncorked. Rightly we should lose no wicket with that target and with Murad and Sankar steady it meant we can actually sit down and take our time getting ready to bat!! Thank you to Adoré. They were undefeated until today but they came up against a Shark machine that had blended together very very well. It is always a pleasure to play against them.

Thanks to Sano for umpiring. Next up – Paddy Foley’s and wouldn’t we love to fix them up, too.

Two other events were significant today.
Firstly, Ramadan Mubarak to all. Best wishes at this important time of the year for you.

And, we also kicked off our ‘ChariTEA for MND’. In some games for the rest of the season we will offer a cup of tea – in a proper cup, on a saucer, no less – to anyone at the game who wants one, for a small one-coin donation. The money collected will go to a charity in Australia that is fighting Motor Neurone Disease. Go to ‘Freeze MND’ <http://freezemnd.com> for details or ask just KB. We had a great start (Y2500+ collected) and it was nice to have a chat over a ‘cuppa’ at the end of the game with Adoré.