Our regrettable loss to Sano meant that we would face Tochigi in the semi-finals. Considering Sano got to play Hokushinetsu in their semi, we really missed a chance. But our bowlers had been on all tournament and our batting, led by a sensational run of form from Vivek, would be very ominous if it came together. Our Achilles was our fielding. Tochigi were reigning Champions and a very organized team with great depth. Three players, Chris Molloy, Scott Musgrave and Paul Grant take us through the game. 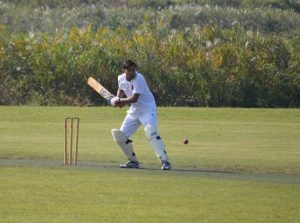 Dhugal and Vivek opened the batting for the Sharks against Tochigi. Both had some good scores under their belts leading into the match. Dhugal unfortunately fell for 5 in the second over, top-edging an attempted hook to fine leg.
Vivek and Vicky then shared in an excellent partnership of 62. Vivek played particularly well, mixing swashbuckling swipes—including a pull shot for six that threatened the players on the adjacent ground—with some deft nudges. The pair also ran well between the wickets, picking up a number of twos. Vicky played a supporting role and looked comfortable until being stumped (sportingly walking off himself) for 14.

At 70 for 2 in the ninth over, things were looking bright, and a score of around 150 looked in sight. Unfortunately, the Sharks were about to enter an all too familiar and severe collapse. Vivek was next to fall, trapped LBW for 43 by the impressive Kumar. PG and Thurgate were both bowled without troubling the scorers. Navin played an exquisite forward defensive that was widely applauded, but could not capitalize on the momentum, being run out for 2.

Karthik was well caught in the covers for 1. Hassan played a measured innings, trying to weather the storm, but was eventually out for 7, LBW to a full ball. Scott and Molloy tried to add some late momentum, but struggled to get any big shots away. Scott fell for 5, clubbing a full toss to long off. Molloy went off the last ball of the innings, missing a straight one with a hoick across the line. Mairaj was left stranded on 2 not out.

In the end, we squandered an impressive start to be all out for 97. Tochigi deserved some credit, though, for bowling accurately, especially their spinners, who managed to strangle any momentum we had. Hats off to Vivek, who continued his impressive development with the bat.

Bowling (Paul Grant)
There would be few who would be brave enough to say that all they need to do is just take things cautiously, no rash shots and “we’ll get the runs easily.” (Famous last words of a few Shark victims this year) The Sharks are at their supreme best when defending small totals, just ask the Tigers, Wombats, Max and Paddy Foley’s all who were made to seriously sweat and work for their meagre target although with this Sharks bowling side even 80 seems like 250. 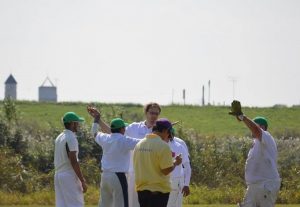 Viv kicked the innings off with the new ball and with his tail up after yet another heroic knock with the bat and was eyeing some Tochigi wickets. His first over consisted of some tight but slightly too straight balls which allowed the swing and the batsmen to work them off their legs for a few runs.

Mr. Reliable, Varun took the new ball from the other end and looked a little more industrious but again perhaps slightly too straight and was also worked away for a few runs. Toiling away, searching for the crack to pry open, neither bowler was able to penetrate and with the score reaching 20 without loss after 4 overs Dhugal tossed the ball to PG who would be the first to admit that his second half of the year’s wickets column had been somewhat barren. Desperate not to go down without first giving the Tochigi side a little taste of pepper, PG managed to find the swing that has eluded him for the most of summer and ask some serious questions of the Tochigi openers. On his fourth ball of his first over he got the Tochigi opener to tickle it through to CT for yet another “c. Thurgate b. Grant” this season.

With this crack the Sharks were up and running, then being made to wait and wait and wait while the Tochigi No. 3 put his thigh pad in, gloves on, mark center and finally fix his hair. His first ball was one that made him work to keep it out and spare the long walk back to the pavy for a globe. 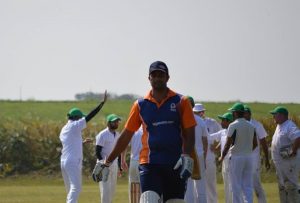 Captain Dhugal saw fit to make a double change and brought himself on. This proved to be an inspired decision as he himself claimed two wickets in two balls to really put the fright into Tochigi. The second of which was foreseen by the canny skipper as he predicted a short one first up to the new batsmen which he managed to tickle through to C. Thurgate.

His hat-trick ball was one which this writer believes was about a centimeter away from the ball going straight up. Instead the ball sailed over slips to third man for four. Tochigi made the cardinal sin of giving the Sharks a sniff at heroics which has been well and truly evident this year. The Sharks are at their best when they sense collapses and when Scott was thrown the ball to maintain the momentum he didn’t let his side down. With a masterful display of outswing bowling and control, he was well rewarded with a wicket in his first over and with Chris Molloy chipping in with a well flighted ball to dismiss Roshan the Sharks were in it with the score at 5/55 and sensing more wickets.

Prabath and Aravinda steadied the Tochigi ship with some well-weighted boundaries to take the pressure off a little. But with Scott bowling imperiously well, anything could happen and it did, with the score at 76 when Scott removed Aravinda with a very well taken and measured catch from Mairaj on the mid-off boundary rope. (Save as houses is Mairaj).

With 20 or so to get and Sharks needing four wickets to make the final it was more or less looking likely that Tochigi would weather the Shark storm and survive and this was made more secure when Raj sent Vivek to the boundary with a powerful cut shot through point. Dhugal had one last roll of the dice and threw the ball back to would-be bowler of the tournament Sancheti, who claimed a consolation wicket with the score at 95.

With the writing on the wall Dhugal decided that it was time to finish up either way the innings and did so with consecutive wides. It was a well-fought game with some characteristic Shark sting. When under pressure the Sharks bowlers stood up like they have done all year and make the opposition work their tails off to score the win. Great catches to Mairaj, Vicky, and C. Thurgate.

Bowling  and Fielding (Scott Musgrave)
With only a small total of 97 to defend, the Sharks had little or no choice but to knuckle down and get as many Tochigi wickets a-falling, like lumber if possible. After a disappointing defeat to Sano the previous day after batting well but not quite well enough, it was time now to bowl and field our way into the final against last year’s winners.

After a rousing pep talk from the skipper, the Sharks headed out into the green fields of Sano 3 to scrape a victory from the jaws of defeat. Skipper Dhugal threw the red to the dangerous youth of Vivek and the explosive experience of Vicky to get things rolling. It was obvious from the start that the Tochigi boys were happy to take their time chasing down our total as they shied away from quick singles and were happy to block and leave deliveries if needed. It was with the first change in bowling that the first wicket fell, with strike weapon, Paul opening his account with a ball that eventually dropped into waiting hands.

With Tochigi still happy to plod along adding to their total, the Chiba team went on the look for even more victims. The Skipper Dhugal was the next to pick up the red and the next to claim a scalp, nabbing two quick wickets for only 9 runs off his two overs. Lots of good chatter and enthusiasm resonated in the field – a stark comparison to the Sano game the day before, and the fielding showed energy and a willingness to be in that grand final in the afternoon at Tanuma.

Scott was then given a chance to take on the Tochigi batting line-up and bowled very tidily picking up two wickets in the process including a skied catch to Mairaj at deep mid-on who swallowed the catch like a rugby player receiving the ball from kick-off. Chris Molloy would also get the chance to have a crack with his leg-spin and he too was part of the action combining well with Chris Thurgate behind the stumps to grab a stumping. 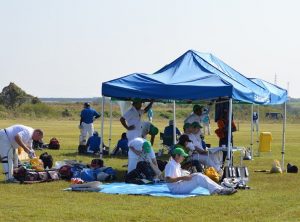 The game getting closer to a climax with few runs and over left on the board, Kumar of Tochigi got stuck in pushing the ball around trying to find the winning runs. There would be one last wicket to fall with Vicky coming back into the attack toward the end of the game, but it was to be in vain as the number 8 and 9 for Tochigi steered the reigning, and repeat champions home in a close win with 2 overs and 3 wickets in hand.

Credit has to go to Tochigi for hanging in and getting their win, but the Sharks needed to put more runs on the board. Special mentions for fielding contributions go to Karthik for his accurate arm and ground fielding and to Huss for his energy and running in the field.

SO – another Japan Cup has come and gone. We won 8 and lost 2, with those two seeing us squander solid positions with the bat against Sano and Tochigi. But we played some great games and a lot of people got a run across the comp. We were without our Rising Star Bangladesh contingent, Asala (Akishima) and Takady (Dolphins) so it was a good effort to turn teams out. The losses should be a slow burn for us and help us get our hands on the silverware in 2016!