Chiba Sharks went into the three-day 2015 Japan Cup Finals once again as South Kanto champs and with the confidence that we could snare the Championship that has alluded us. It is a strength of our club that no less than four teams in the overall competition featured Sharks players – Sharks, Rising Stars, Akishima and Dolphins. We had a large contingent unavailable because of that but nonetheless managed to field full teams. Our entry to the Finals was on the back of some great round games:

In the Semis we faced the cocksure Engineers who finished 10/141, losing their last 7 wickets in 10 balls for 4 runs. The Sharks got home with 5 wickets to spare. In the Kanto Final we met Alpha Q. Our regular game with them had been abandoned midway and rain again threatened to intervene but not before a result.

Put on your dancing shoes, we were off to the Big Stage in Sano in mid-October!

Our first up game was a ‘friendly’ against some of the cream of Japanese cricket, which included top Shark, Takady. Last year they had us 5-0 with Takady bowling rockets so we had to be cautious to get off on the right foot.
J-Dev batted first. A smart slips catch by Nav got things going but all-rounders Takady and Taniyama were smart and severe in good measure. KB in the gloves accepted a tickle and Takady’s departure, soon followed by Taniyama’s, put the breaks on. J-Dev 5-120.

Batting second it rained sixes as Viv, Adit, The Huss and Vicky got stuck in to the Japanese top order with 30 off 13. All the middle order contributed and Shakriya nudged some runs. A late flurry of wickets almost cost us but we prevailed 8/121.

Some South Pacific islanders hurl live goats into the ocean to attract sharks, which they revere as gods. First up for points, Chiba Sharks were thrown Kyushu. This team was basically students from Ritsumeikan Asia-Pacific University, founded and managed by former-MyWy, Hinata. It was a very brutal Japan Cup initiation for the boys from RAPU.

Finals Day 2
Rain, and not of leather. Light, but lots of it from the early morning. Spurred on by the bovine inaction by some JCL staff, PG and KB debated various Shakespearian strategyes, including a raide on the nearest ‘ye home centre’. If Great Birnam Wood with a brush on the end does not come to Dunsinane, go and bloody get it! Brooms, demanded, eventually appeared and were applied to great effect in clearing water from the pitch. Cardboard likewise. There was a lot of residual mud from the summer floods but we were eventually able to get a truncated game (or Theatre of the Absurd? I always get Camus and Cardus mixed up) going. Kudos to PG. 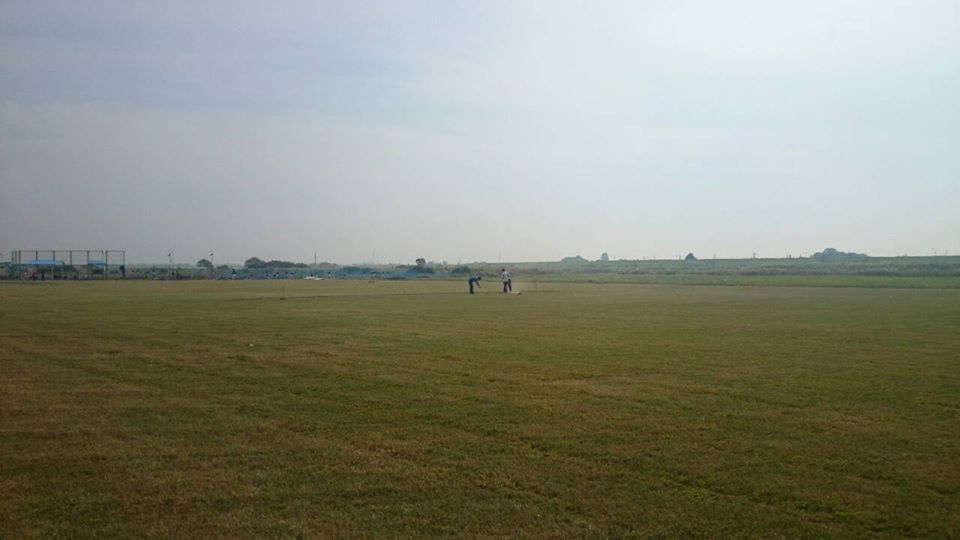 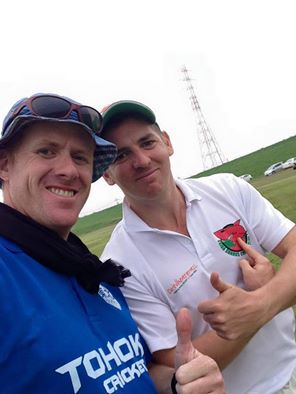 Tohoku are our kindred spirits. First time we met we lent them much of our gear so we could beat them up, badly. We then pinched their gun and captain, PG. And they still like us. And we like them. In honour of his old and new teammates PG captained for this game.

We were restricted to 8 overs per side. The rain had stopped and would hold off but the pitch kept low and the ball was quickly a slippery rock. Somehow, though, Adit got the bugger to SWING, and swing late and, dare I say, dramatically! That resulted in one LBW and 3 bowled to The Removalist. Another 2 to Vicky, one to Scott. Add a run-out. Only one Tohoku player got past 3. They survived their 8 overs for 21.

Vivek and Vicky wandered out to the centre and Viv was quick to return. Over 1 went for 1-5. Over 2 went all Wimbledon-shaped! Vicky, always strong on the forehand, went straight 6, 4, 4, 6. Game, set and match. It was disappointing that we could not get a full game in, but to be honest, it may not have lasted much longer, anyway. It was great to get on the field with the Tohoku lads, though.

We had not really been challenged as yet but next had to jump in the cars and head over to Tanuma for our game against Sano. This would decide who topped our pool.

It still rankles senior Sharks that we lost the Final to Sano a couple of years ago when our ‘keeper and middle-order bruiser, Chris T, as a volunteer, inexplicably ended up having to umpire that game while Sano played with two JCL officials in their line up. They just seem to find ways, or the personnel to beat us. Or we just do it ourselves.
Tanuma was desolate, dull and misty. We encountered three hags who promised tantalizing performances. (Actually it was just Yoshi.)

We bowled first. Sano openers hit through the line and took advantage of bad balls and luck. What hurt most, though, was efforts and decisions in the field that let an eventual-century-maker well and truly off the hook and gifted Sano unnecessary runs. That is where the game went. Dhugal’s first of two catches off Vicky removed one at 1-37, but it would be another hundred runs and a lot of frustration before the next at 2-137. And then another solid partnership till the third at 3-195. All bowlers copped in to varying degrees but the general agreement was that we might have blown it ourselves.

We had been batting with verve, power and some depth so with that in mind, Dhugal and Vicky took up the chase. Vicky was first to go but it joined the red-hot pair of Dhugal and Viv. They did not disappoint. We were ahead of the game at the half way stage when Viv fell for a rapid 44. The captain then increased the pressure with Huss. Dhugal’s fall in the 14th over left us at 3-155 (at the same point Sano were 2-139). PG was the new batsman but unfortunately he could not go on and, as wickets started to fall, Sano’s heads and effort lifted. Boundaries dried up against the spinners and with that the game slowly drifted away from us. We would fall an agonizing 7 runs short. While we had our share of let-offs with dropped catches, we knew we had stuffed ourselves.