The Chiba Sharks registered an emphatic win today over the British Embassy Cricket Club in their first JCL game of the 2009 season, not only comfortably accounting for BECC but also gaining a valuable bonus point.

While the weather forecast did not look promising during the week, Sunday dawned increasingly fine, almost balmy, and, most importantly, dry. Kanto-wide and beyond the sakura were in full, glorious bloom – portentous? The Sharks were reduced to ten with a late withdrawal for the game at Fuji. BECC won the toss and chose to bat, and the Sharks took the field cheered by the generous donation of Krispy Kream Doughnuts courtesy of Levi’s better half, Tamami (Thanks Tama-chan!).

Pat and Alexis opened the bowling from the shed end and the car park end, respectively. It was almost a cut and paste of our last game, with Pat testing out the tall Embassy opener before bagging him LBW in the first over. That is where the comparison ends. Pat and Alexis pinned the batsmen to the crease with good line and variation, and runs were extremely hard to come by as the Shark infested field more than made up for the missing player. Not much was getting past the doughnut-fortified and doughnut-inspired fielding ‘ring’, but a lot was getting past the bat.

The first bowling change brought immediate wickets with Kris latching on to one from Levi and Dave picking up one bowled. This brought the dangerous Kamran to the wicket and, although he survived a very tough chance given first ball off Dave, he could not make us pay. Levi also dealt him a savage blow on the hand from a rising ball and it obviously bothered him. Err, the batsman, I mean, not Levi, who claimed, “I didn’t mean to hit him on the hand… I was aiming for the ribs”. Wickets fell with regularity and an inspired Sharks side strangled the Embassy batsmen with their attack on any almost ball that happened to find its way off the bat. The Sharks kept on their toes with Dave bowling a great length and Levi with venom, and the introduction of Prashant and Brett continued the good work. Mayank chipped in with a solid over before drinks. At 20 overs the British Embassy were 5 for 80.

A great effort, but not one to be satisfied with. Captain Chris stressed the need to knuckle down and finish the job quickly after the break. If the fielding had been exceptional it now upgraded to the phenomenal! Despite the occasional pairs of hands showing that doughnuts are not the only things with holes in them, players literally launched themselves at the ball, cutting to one run or zero balls destined for the rope, or running them down to save fours. Stirring stuff!

Dave and Brett added to their wickets and Prashant was just downright miserly without luck. It was a continued and sustained team effort by ball and hand, but among many highlights, one demands attention. Nick had been panther-like all day, but his catch off Brett – the ball low down and howling away to his left – was an absolute scrrrrrrrrrrrreamer! In the words of John Travolta, “This catch was automatic. Acrobatic. Why, it was Creece lightning!!” “After I caught it… I’m sure I was flying!”, said Nick – true, he really said that. The team figuratively watched the replay several times on the big screen at the ground (if there had happened to be one). By the innings end Embassy were just trying to survive each ball and runs basically dried up. Alexis put them out of their misery with two wickets in a row. British Embassy Cricket Club, all out 128 in 36.4 overs, with sundries at 39 (23 wides). It is a testament to the accurate bowling and great fielding that, as small as Fuji is, only 9 4s and 1 six came off the bat.

A little over 3 an over would see us through, and we had a strong line up despite being one short. Prashant and Nick opened the batting, and if Nick had been short of net practice, the opening bowler made up for that by sending down 6 wides for a marathon 12-ball over. But you would have thought that we were six players short and there was a train to catch by the way first Nick and then Prashant waded into the Embassy attack.

Flicks to leg, pulls and some absolutely fantastic drives through and over the field flowed from both bats. The batsmen were rarely troubled, except when forced to cough up a single by the eager non-striker! The one real chance off Prashant was put down at ‘doughnut corner’ and the fielders were overheard to be looking forward to chance to beat the Sunday traffic home. After 10 overs of brute grace, the score was a binary boffin’s wet dream at 10-0-101. Nick’s dream return to cricket in 2009, however, came to a sticky end. His head lifted as he wound up for another big stroke and, despite his desperate lunge to make his crease, he fell short – actually airborne again and short. Out stumped, slowly, for 47. Pat joined the rampant Prashant and they quickly knocked off the remaining runs, with Prashant 57 n.o. and Pat 8 n.o. Chiba Sharks Cricket Club, 1 for 131 in 13.4 overs.

It was a great all-round effort, continuing on from last week. From the first ball the fielders supported the bowlers, putting their bodies and appendages behind the ball and chasing hard. Embassy just did not get easy runs at all. All the bowlers held their lines and were rewarded. As for the batting, the mind boggles at what score we might have ended up with if we had batted first, but it was a clinical job done with razor sharp machetes by the openers. By getting the runs in under 32 overs we get a bonus point. A great start to the 2009 season for the Chiba Sharks Cricket Club. 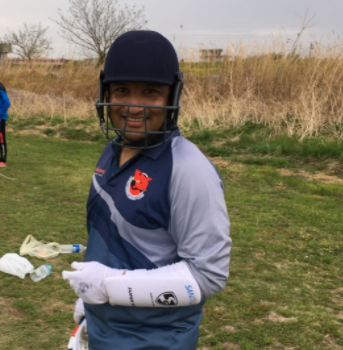