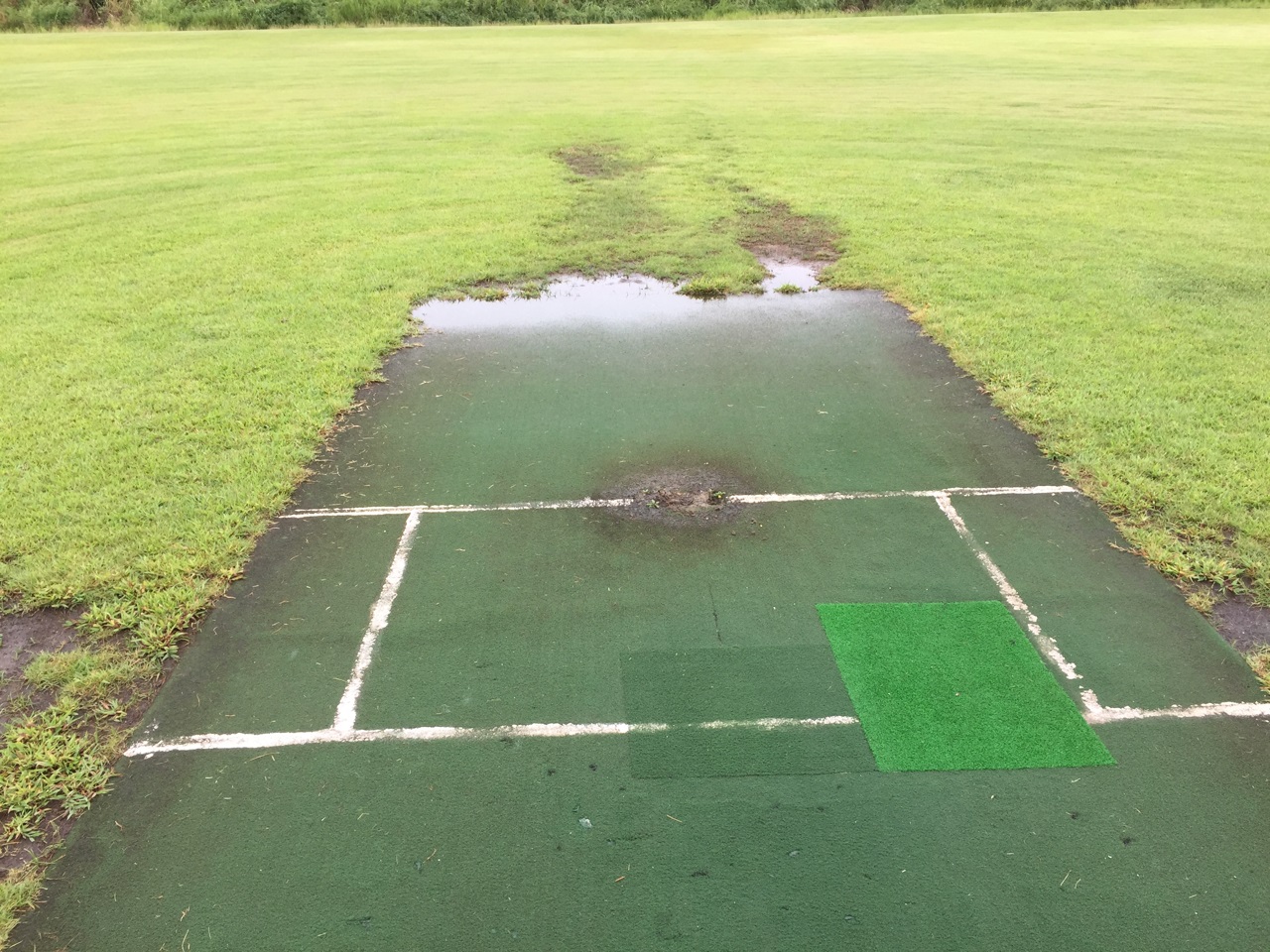 Another early morning of steady rain after another night of steady rain at the end of a summer of steady rain. The 7a.m. text from Match Organizer Krishna saying “Game on” seemed beyond belief, but ours is not to reason why, so after squashing up the helmet and pads to make room in the duffel for snorkel and flippers the road to Sano was squelchily hit.

Windscreen wipers working overtime most of the way, but as Saitama gave way to Gunma the rain gave way too, and by the time we reached the Sano grounds there was a bit of blue sky reflected in the puddles around the wicket at ground number 3.

An energetic crew of players from both teams, armed with a bagful of 100-yen shop sponges, transformed the soggy wicket in a matter of minutes, and though we had to reduce it to 35 overs per side, it was indeed “Game on”.

For the last game of the season the Sharks 1st XI contained a striking mix of youth and experience, nicely exemplified by our opening pair of seasoned campaigner Dhugal and emerging talent Kavin. With the outfield soft and slow and the soggy wicket prone to unpredictable bounce, it was a difficult pitch to bat first on, 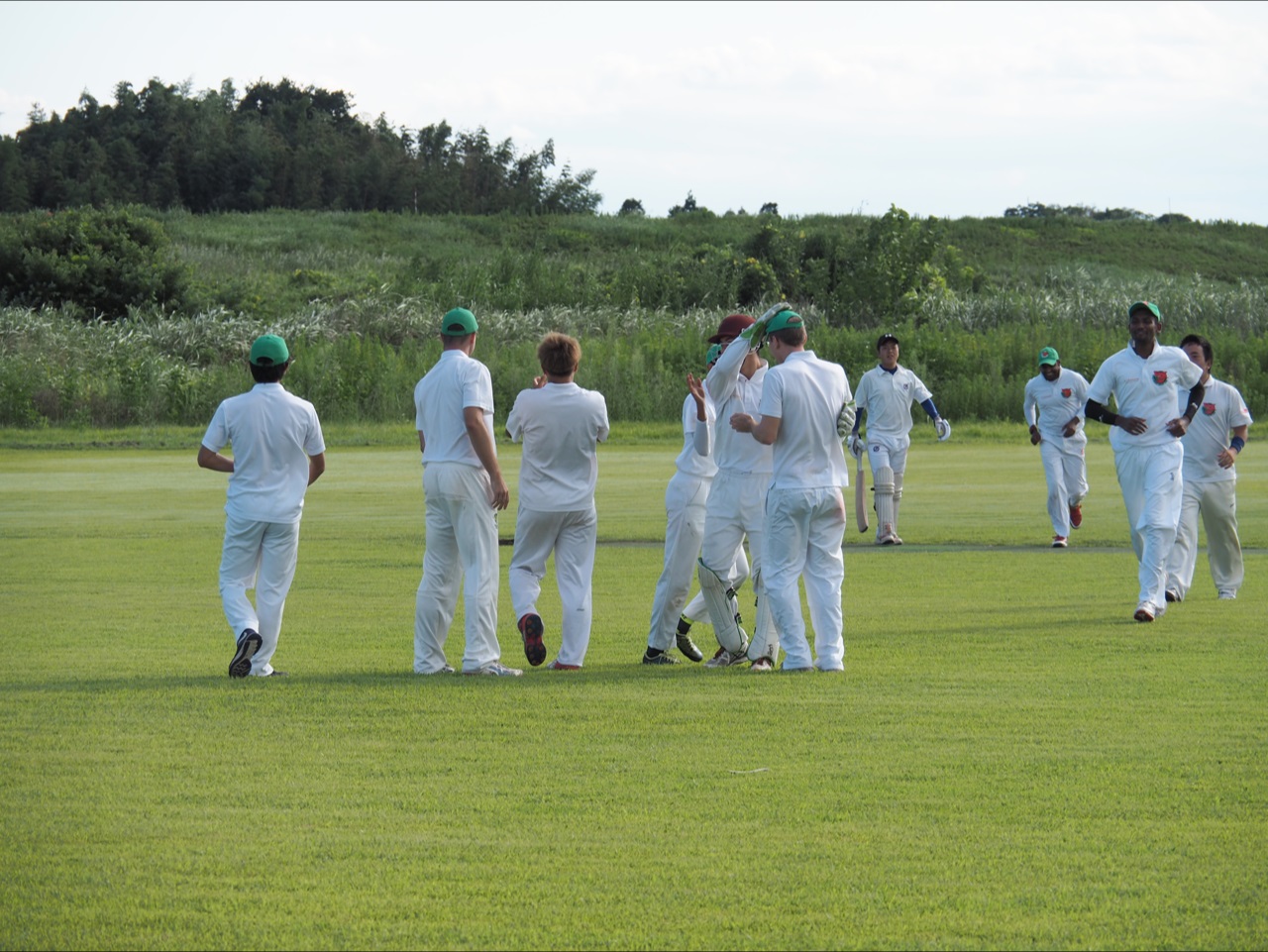 and our openers had to grind it out in the face of some occasionally wayward but always threatening opening bowling from Buddika and Yamada.

Kavin had coped well with this, getting to 7 by watching the plentiful crop of wides go past and taking the singles wherever possible, and was a bit unlucky when he slightly mistimed an aggressive cut shot and fell to a sharply-taken catch at backward point. Tommy then joined Dhugal for what was to become the best partnership of the innings. This pair added 43 for the second wicket, the ones, twos and wides punctuated by a couple of trademark boundaries from the skipper. Dhugal had reached 20 at what for him was a fairly sedate pace, but when he tried to accelerate he ended up wishing he’d stayed in third gear.

The skipper came dancing down the pitch to Kano and the crafty leggy got it round him for a straightforward stumping. Next up Marcus, who played with the admirable aggression we’re coming to expect from him, a single to keep the strike followed by two boundaries in the first full over he faced. But after his ninth ball he was following his skipper back to the tent, having been stumped in carbon-copy fashion off the same leggy after an identical Dance of Doom. The All-Japan combo of Takady and Tommy seemed to relish the challenge against their national squad colleagues, and got us into three figures on the way to clocking up 16 runs each, Tommy’s runs coming in the most dogged knock of the innings (42 balls faced) and Takady’s coming in the paciest fashion (SR 64.0). 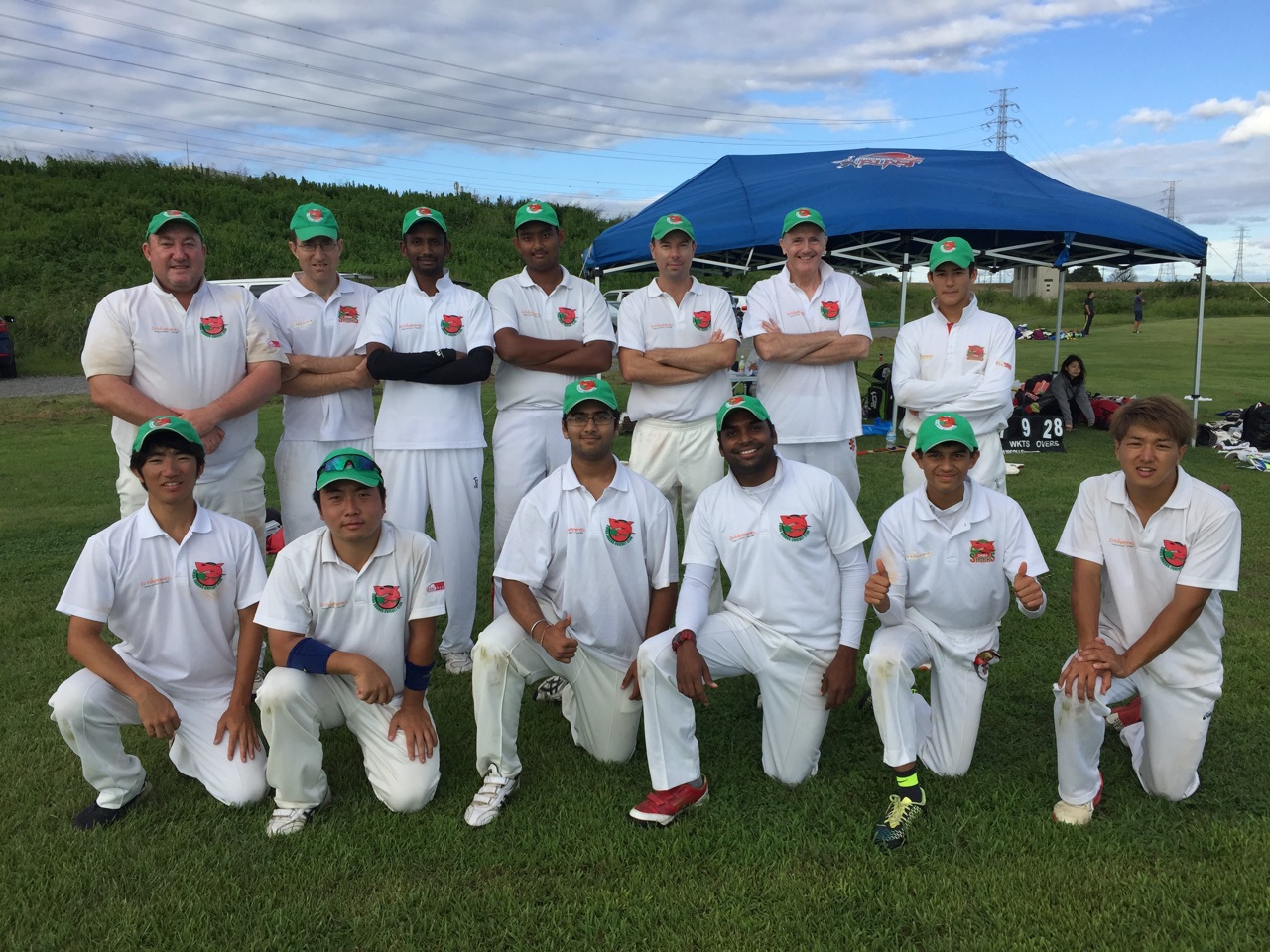 After Tommy’s departure Takady paired up with Asala, but Takady soon fell to a skied infield catch and Asala, looking uncharacteristically out of sorts, got castled on 7 to become the dangerous Aoki’s second consecutive victim – Sharks 118 for 6 with 5 overs left.

After that not only did the tail fail to wag, it began to retract up the Shark’s rectum. CT decided to not die wondering, but probably did end up wondering how he contrived to lob one from Aoki so accurately that mid-off didn’t need to move a step. Your reporter made the fatal mistake of crossing with CT while the lob was airborne, thus placing himself in the crosshairs of the now rampant Aoki. The subsequent LBW was so plumb that the umpire, two dog walkers and a pair of grizzled old anglers on the far bank of the river all raised their index fingers in unison.

Neel got busy straight away, running singles off the first three balls he faced, but in going for his fourth scoring shot he drove too uppishly and too close to the bowler, who got down athletically to palm the ball up and complete the catch at the second attempt. Krishna offered a more straightforward C&B to allow Aoki to complete a very impressive fifer, and Adit, not for the first time this season, was left without a partner to dance with and a few coins still in the jukebox – Sharks all out for 127 in 33 overs.

With the opposition needing 128 to win at 3.6 per over, the Sharks felt they were in with a chance but knew they’d have to bowl really well to get the win. Adit and Tommy got to share the shiny cherry, and both showed plenty of fire in their opening spells. The Wyvern openers were not easily intimidated though, and saw off our pacemen while moving the score along to 30 without loss from 6 overs. That all changed with our first bowling change, as southpaw spinner Krishna, in his last Sharks outing before departing to college in the US, decided to sign off in style, breaking the opening partnership with his first ball by getting Kano to snick one into Marcus’s gloves.

A few balls later the other opener got run out after some smart work from Tommy, and the Kansai Kinpatsu stayed involved by combining with Marcus for another caught behind to ensure that the newly-arrived Aoki had a much-less fruitful time with the bat than he did with the ball. That little flurry left the Wyverns wobbling at 39 for 3, but Okoshi and Buddika set about restoring some order to the innings, and though Buddika fell to a very smart stumping by Marcus off the bowling of Neel, by the time drinks were taken the Wyverns were 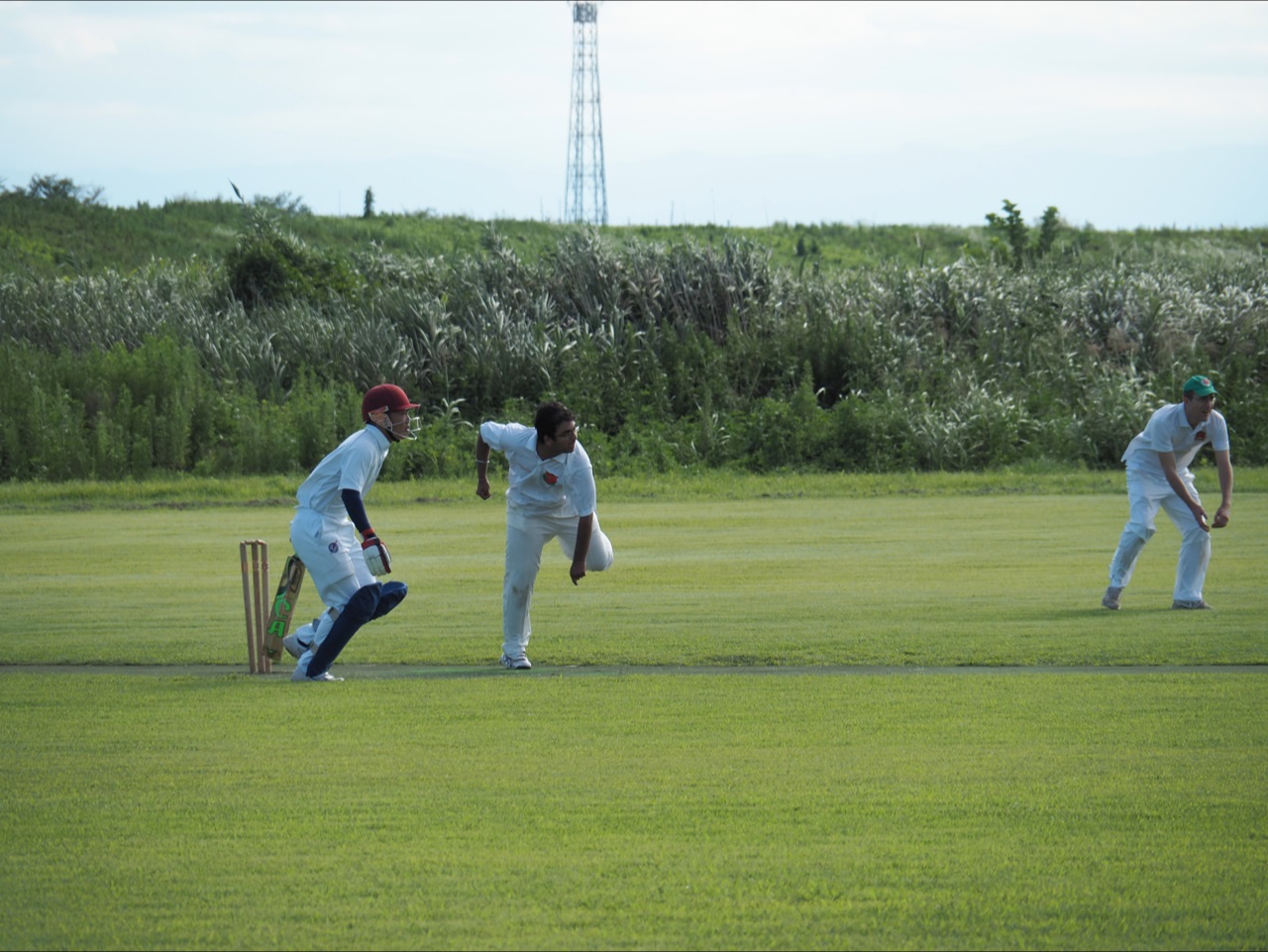 looking comfortable at 88 for 5.

I’m not quite sure what Dhugal spiked Takady’s drink with during that 5-minute interval, but I wish he’d put some of it in mine. In his first eight balls after the break Takady went on a one-man mission to get us back in the game. First he responded to Sawada’s knocking him to the boundary by bowling the leftie around his legs. Then when Iwasaki hit a 4 off the first ball he faced, Takady made sure the next was the last ball he faced, the bowler showing excellent reflexes to get the C&B. And in the second ball of his next over Takady made it three in a row by bowling Takahashi – 93 for 4 had become 98 for 7 and the Wyverns were looking much less comfortable.

Then it was time for Krishna’s farewell flourish. Having served up a 6-course banquet of sumptuous spin, full of tasty changes of pace and flight, in his final over he delivered the pièce de résistance, squaring up Wyverns number 3 Okoshi for an LBW and allowing us to wave goodbye to the man who had held our opponents’ innings together for over 70 minutes. Krishna bowed out with 2-19 off 7 overs at an economy rate of 2.71, impressively tight bowling against such a good batting attack.

A few overs before all this drama Dhugal had decided to give CT a break from his fielding duties and give a guest fielding appearance to Marcus’s uncle Stuart, fresh off the plane from Down Under for a short holiday in Japan. The audible sighs of relief from the Wyverns tent as the elder Thurgate ceased his panther-like prowling of the offside infield proved woefully premature. The second ball of Takady’s last over was well-driven, wide of Stuart at extra cover, but the shot didn’t quite have the legs to overcome the lush outfield and reach the boundary, so Stuart was able to catch up with it a dozen or so yards inside the rope. By this stage both batsmen had turned for the easy second run, but then for some reason they decided on a mid-wicket consultation session: “Shall we complete this second run, or would you like me to go back and let you take the strike? By the way, where’s the best place to get some Miso Ramen around Tatebayashi sta…Oh bollocks, direct hit”. 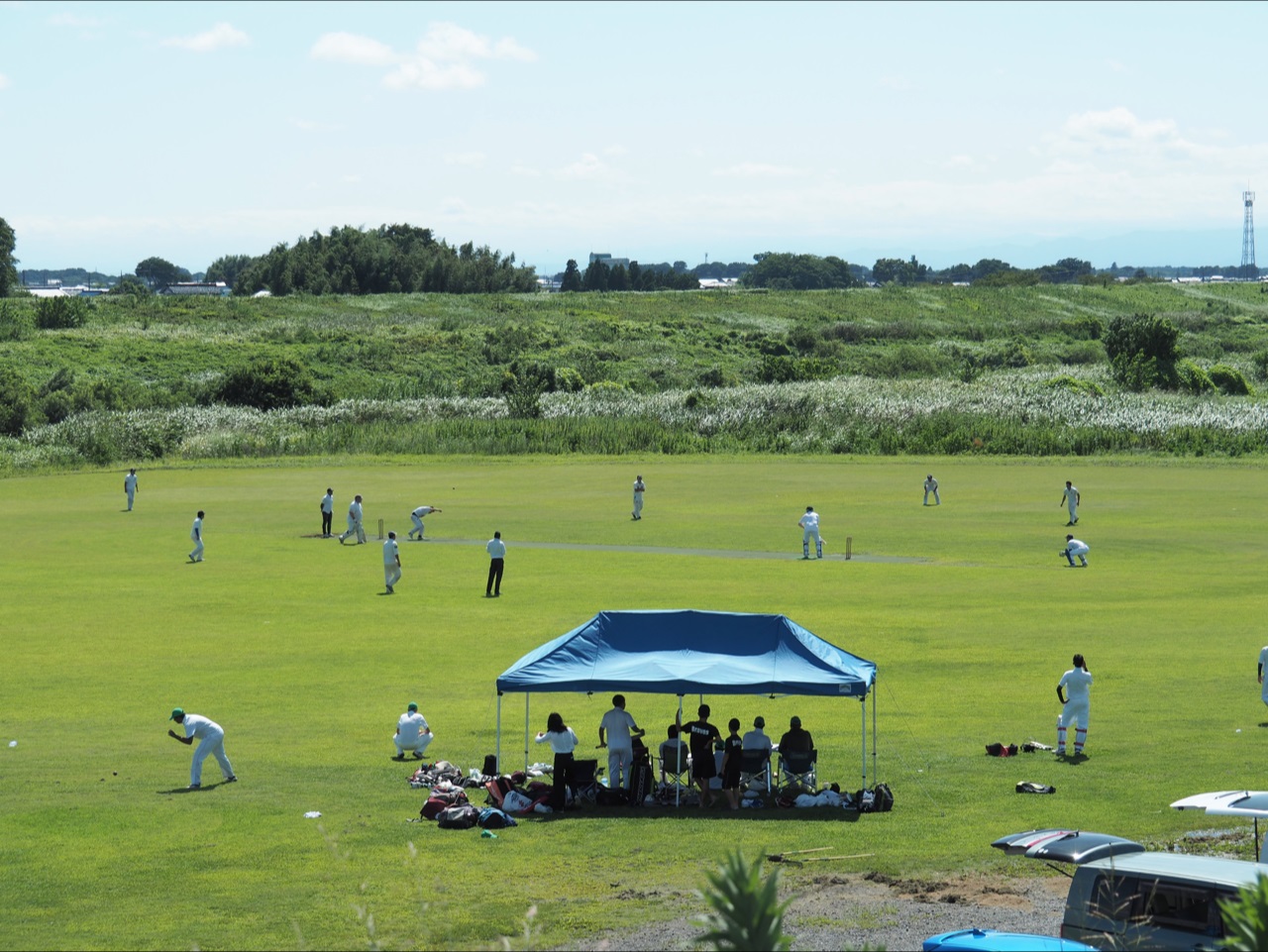 The run-out was a marvelous piece of cricket, not just for its technical excellence but also for its timing. The game was now perfectly poised, Wyverns needing 19 runs off 50-something balls and Sharks just one raised index finger away from a remarkable come-from behind win.

Unfortunately for us, the Wyverns number 11 was not a “Which end do I hold this bat thing?” number 11 – he was the Wyverns captain, a national team top order batter, a bit pooped from several games in Korea earlier in the week – who’d demoted himself in the order in the hope of a restful afternoon (Sharks had a similarly cream-crackered Rui stepping down to 12th following the same trip).

Well Ohta-san’s Saturday siesta plan backfired and the skipper ended up having to steer the Wyvern’s rickety innings through some dangerously Shark-infested waters in the climactic overs of the game. Unfortunately for the Sharks both he and his crewmate Uehara were up to the task, and despite trying everything including shining up one side of the kitchen sink, the Sharks were unable to get the final out, and in the 28th over Ota smacked one to the boundary to finish a fine game in fine style.

For the Sharks, disappointing not to finish an under-achieving season with a win, but the determination shown in defending a modest total was very encouraging, and we got ourselves into a situation where for three-and-a-bit overs we were one ball away from winning the game.

There are a lot of talented young players in the Sharks 1stXI squad with some excellent senior players to guide them, and every reason to expect a much better number in the Wins column next time around.