The first matchup of Autumn would find the Sharks doing battle with Tigers in the final Round match for what has been a very successful JCL1 season. The two rarely meet in the animal kingdom, but it has become a ferocious battle of wits in the cricketing kingdom. Taking place at the ever evolving Sano International Cricket Ground, it was the feline variety of predator that won the toss and elected to bat.

The Sharks were sent out to field led by Master Takada who put out Yosuke “Higgapon” Higashimoto with the new red ball. He was paired with an unlikely candidate to open the bowling, Mr Navin Jinasena. It was to be the unlikely Statnav who would strike first taking an opening Singh-er caught-behind by young Marcus Thurgate. With his next delivery, Nav would snag another taking another wicket in identical fashion to give the Sharks a good start to the opening section at 13-2.

It would not be long however before the Tigers dug in their claws to fight back as Koul and Ravichandran pushed the Tigers to 100 before the latter fell for 48 from some pressing bowling from Sankar. The Tigers would however continue to accelerate and it was 68 runs later that the Tigers lost their Koul for a very useful 63 from 60 to Pav.

Another expensive partnership was to form before captain removed captain at 215-5. Sensing a bit of momentum, the Sharks managed to start cashing in on some cheaper partnerships. Sankar, Takady and Higgapon would claim a wicket a piece while the Tigers order saw out the end of the innings with a very tidy 278.

Set an impressive task for a team without some of its mainstays like Paul and Dhugal, Takady offered the experienced heads of Sankar and Sumon to face the Tigers opening onslaught. It was tough going for the openers as they found things much stickier than their opponents on the day.

Sankar was unfortunately the first to go as he was caught by Singh Tankan for 7. Prashant was the next to crease in the all important #3 hole. After slugging it out with Sumon at the crease, it was Prashant who would be the next to return to the pavilion through Joey George. 2-22. Seeing his team in trouble, the splendid skipper, Takady took willow to ball with much gusto ticking the scorecard over and playing some impressive shots in the process.

Sumon backed up his captain as well as he could by pushing the ball around and soaking up deliveries. His heroic support actions would be tragically cut short however when Koul did not lose sight of his catch to see Sumon tuck bat under arm for 18 off 43.

Takady needed support to help the team along but he was unfortunately found wanting as Marcus, Pav and Higgapon all fell for a sum total of 35 runs accumulated. With little more to do than swing the willow, Takady fell for a swashbuckling captain’s knock of 41 from 44 deliveries. A marvellous effort. Kav and Nav joined brotherly forces in the middle, resulting in 10 runs and the only photo of the day. 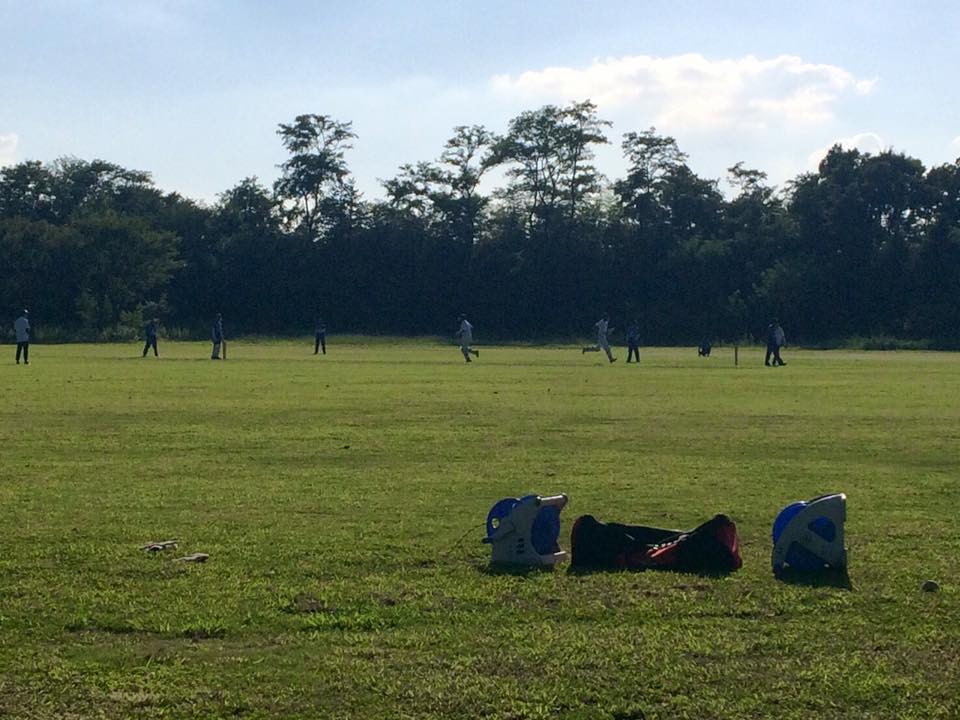 Sanjeewa would be the final wicket to fall from a run-out due to the retirement of Mairaj from the teams efforts. All out for 108 off 30.5 overs and giving a 5 wicket haul to Tigers captain, Bhardwaj.

A game that certainly could have gone a lot better for the team. The Tigers took control with the bat early on and the Sharks were not up to the challenge today. Takady did his best to keep the team in it with his two wickets and 41 runs but it was to be to no avail in a disappointing loss. Tigers are next up again as the Sharks, finishing top of the pile, face them in the Semi Finals. We hope for a different result.