Dr. Wheatgrass ‘Play of the Day’: Clampa’s Half Century and Marcus’ 44 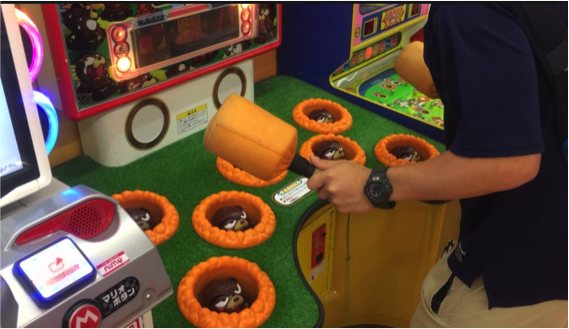 Our Japan Cup campaign (sic) started with a bang – a first-game thrashing of Rising Stars – but was followed by two undermanned, unbecoming, unsavory and utterly forgettable capitulations. To boot, the 2018 Japan Cup T20 selection process has been more like ‘whack-a-mole’ (もぐらたたき) than ‘pick-an-XI’ (we wish!). And since only nine Sharks available against Tsukuba, a couple of moles would have been handy in the outfield.

The IX (a tenth did not materialize) not only had to face a Tsukuba XI in the teeth of a Tatebayashi blast-furnace, most of them had either umpired or played games on the weekend in the same intense heat. KB umpired a Div. 1 game in Fuji on Saturday, CT and Anton umpired the T20 prior to our game, Doogs, Clampa and Marcus played in the winning 1st XI on Saturday! ‘Fresh’? We were as about as fresh as our afternoon kitbags, mate!

But the horrible visions of more doom did not eventuate – WHAT A GAME!!

Doogs won the vital toss and we batted. In the pre-game meeting he emphasized that although two short, if everyone stuck to their game and worked together we were a chance. Support. In the field, we build pressure and limit easy runs. Squeeze. With the bat, we maximize ours through picking gaps. Scrounge. Wickets and boundaries will come as a result, respectively.

Clampa and Marcus were very watchful during the first 5 overs against the tricky but helpfully wayward bowlers until Clampa lit up with three fours, particularly down the ground (0-33). The next stanza of 5 saw the run-rate slow but Clampa and Marcus kept finding gaps and were not troubled, more like idling, waiting for the lights to change. (0-55).

Then the lads slipped a gear and put the foot down! Singles came at will, then Marcus peeled off 14 runs in the 12th including a string of three 4s, brutally through square. More balls were getting past the boundary than the bat, interspersed with singles. With the score on 94 Marcus unfortunately fell one biff short of a well-deserved half-century – great knock, young fella, of maturity and muscle! At the other end, Clampa was also approach his halfa and decided to do it in style and with insurance. He smashed the first three delivers of the 15th for 6 deep into the undergrowth at the Bank End. He rocketed to 50-odd and we were a toasty, tasty 1-119 with five overs to go.

New bat, Doogs, had ‘that glint’ in his eye all day (the one he gets in a bar and if you are talking to him – he ain’t listenin’), and Clampa’s pyrotechnics set him off. The Captain went in evens – 2462 – in the 16th, but unfortunately we lost Clampa next over (2-134). What might have been… Anton joined Doogs and wasted no time in twice giving his Captain the strike. He was unfortunately run-out by a direct hit from the boundary (3-152) for a well-cantered two. In the last few overs Doogs kept swatting boundaries like flies as a series of batsman scrambled to get out around him. Opening bowler Sanjeewa (also spelled D. Madanarachchi) was the beneficiary of the mad rush for more runs and included Doogs for a 17-ball 32. We ended up with a fairly daunting 7-158 at almost 8-an-over.

Despite the good score we couldn’t even think things would be easy. We were probably fortunate that our three 1st XI bats fired up because the rest of us were tried & true 2nd XI. And on paper the same nine probably did not strike fear into the Tsukuba mob if they had done their homework. But it wouldn’t have done them any good anyway. Basically we would have to get some good bowling out of all of 2nd XIers, and some brilliant bowling out of somebody.

Immediately in the sixth Atharva got us our first break with the ball landing in Marcus’ gloveless but very safe mitts and he also gave nothing to the incoming batsman. Next enter Chris Molloy who not only followed suit, he got our next Tsukuba scalp in his second over, with Anton merrily clutching on the second grab at cover. Punctuating Chris’ two overs was a name that we have not seen for a while – Awal. A ‘welcome back’ head-high loosener was followed by a few singles, and although his second contained all manner of mayhem it also included our third wicket with Doogs getting into the catching action. The Lessperados had accounted for three wicket for 31 runs! 3-63 off 10!

Chris continued to ask questions, ripping it in and away. And teams should play close attention if Dhugal and Clampa have a quiet chat. Tsukuba were not and a well-executed plan delivered a skied Clampa floater right into the waiting hands of Doogs at mid-off! KB next paid the maximum price (twice) but came back strongly with a bit more zing. In a day of bowling gymnastics, next up, Marcus, was to prove to be the biggest and most spectacular leap! His first was inauspicious but surprisingly venomous… Atharva held his nerve and more or less line to take the score to 4-107.

We were far from comfortable and the game was delicately poised. But feeling in our ranks was very good. Doogs’ astute juggling of bowlers and field settings had gotten great returns and no batsman had had the chance to settle or dominate. They had 52 runs to get. We were 30 balls from glory!

Heeeere’s the ‘Marcus Show’. Thurgate the Younger was having a Ferris Bueller-like big day and there was nothing off about it! His confidence was up, speed up and so was the Sharks field as first ball he calmly claimed his first C&B off a flailing Tsukuba bat. His old man smokes all kinds of delicious things. I don’t know what the lad had been smoking today but it was good and he was on fire! Maybe he got it from the Cap who also first ball enticed a rash and desperate shot from a dangerous-looking Dehan (aka S. Yapabandara). The ball curled and snaked out flatly to deep point, and rushing in to take it knee-high was Marcus. At now 6-113 Tsukuba were in trouble and the Shark Desperados were circling. In Marcus’ next he worked over the batmen with various lengths at speed and the only bat on ball went straight back to him – taken and flung skyward. 7-122. Clampa returned to keep a professional eye on things, but Tsukaba were broken. The final ball in Doogs’ over sailed out to the deep where a geriatric-athletic effort was put down. Nonetheless we had triumphed by 15 runs. Brilliant game! 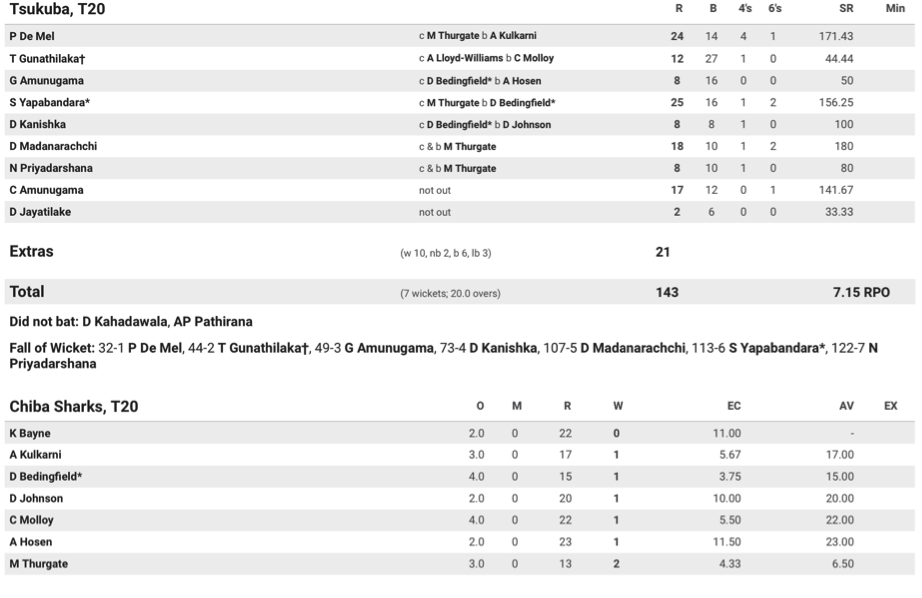 It was a fantastic effort by the Chiba Sharks. Whether Tsukuba under-estimated us and/or thought eleven would beat obviously nine, who knows? And there was not much luck involved – if any, they had it.

With the bat, our top three were superb. Clampa and Marcus showed great understanding and made the most of chances to score, almost giving us a ton start. Any hope Tsukuba had of making inroads was snuffed out emphatically by Dhugal who picked up where he ended on Saturday. This also ignited Clampa (or was it the other way around?).

With the ball, first off was Doogs very savvy field settings. It never actually felt like we were two short and Tsukuba must have had to count us a few times. Our bowling was as unlikely as it was excellent, and except for a couple flurries of agricultural hitting, Tsukuba were kept in check. CT behind and often up to the pegs, turned the pressure screws even so more, like a crawled bear ready the wipe the batsman’s pails orf. Surprises were set and traps sprung. All seven wickets were taken by the field, usually named Marcus Thurgate. And 46 off 40, 2-13 off 3, two outfield catches and two C&B was a fair effort by Marcus. Fair effort for the Japan National Keeper! Very satisfying.

At the end of the game we had every right to go ballistic in celebration (something we excel at), but everyone was just too bloody pooped! But the satisfaction is absolutely there to see in the after-game team photo. Nine genuinely happy, proud and completely f-ing knackered Sharks. Well-played, sirs! 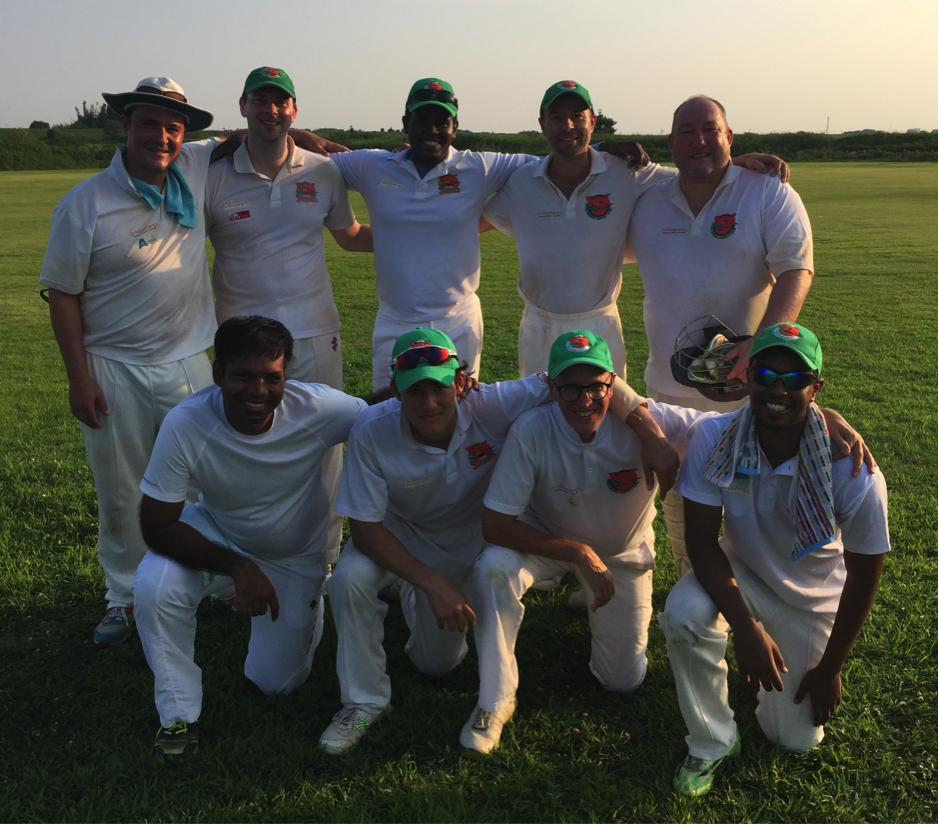