Somehow, in 2016, we evolved a new and feisty rivalry with the Tigers Cricket Club. It is one that sees our 1st XI deal with the Tigers selection quite comfortably, but that ends up with our 2nd XI coming off, well, second best. Such was the case with the 2017 chapter, as yet incomplete as the 1st teams are yet to clash (watch this space). And while the 2nds took quite a thrashing on the ground and on paper, there were definitely positives in the loss.
The Sano 1 ground was a picture of blooming health for a clash we have come to look forward to with great interest and expectation. It was neither hot, nor cold. The cabbage moths were out in force, making the most of a spring carpet of flowers – who would end up the kings?

CT, in amazingly only his first 2nds game of 2017, got right back into the groove by deftly losing the toss. We were sent into the field.

Gaurav and Adit got us off to a magnificent start, sending down two maidens and with only a wide in the runs column in the third over the Tiger opener finally connected, the deliciously audible nick going straight into CT’s mitts (1-1)! Unfortunately, we had to wait almost twenty overs and 145 runs until the next wicket. But that was about the ‘only’ difference between the teams. G&A kept up the pressure but edges and scratchy shots found started to find gaps and ropes.
KB and Sankar took over with the ball and it was here that things started to get out of hand. KB had a horror spell with far too many balls short and on the pads. We paid the price. Sankar held his own more but placement, short boundaries and shots out of the textbook of agricultural unorthodoxy took toll. 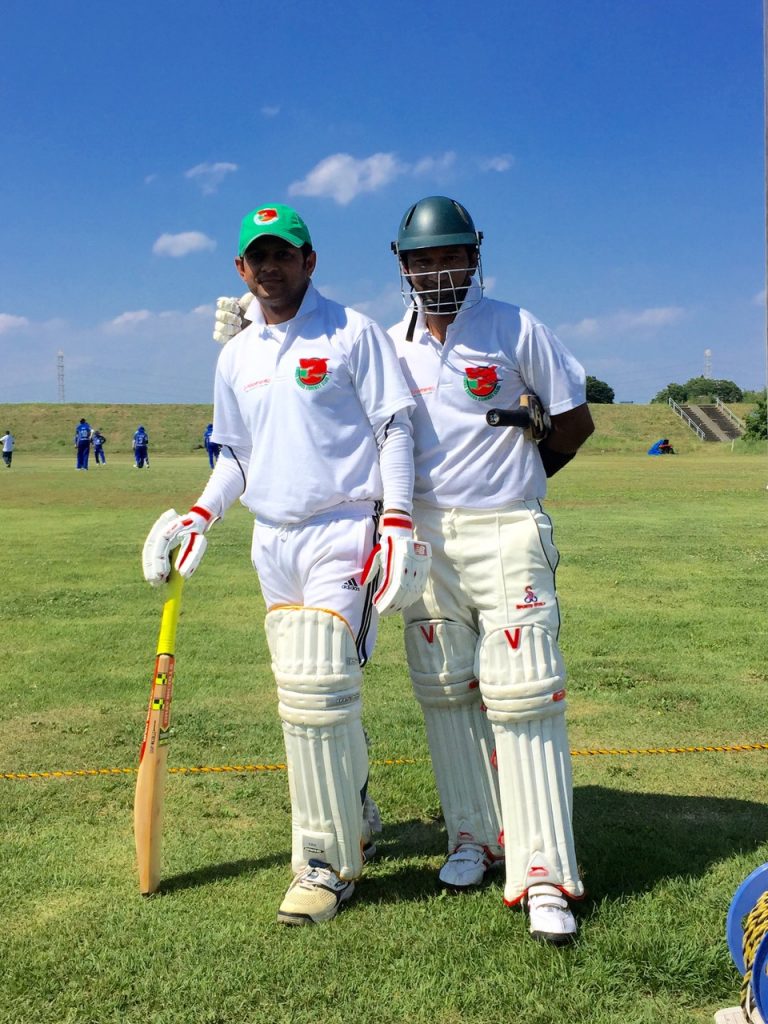 The next up, Kavin, had numerous little victories with good length, line and bounce but he, too, could make no inroads or halt the flow of runs. The total kept mounting and at 20-over drinks we were in deep strife with Tigers 1-140.
We always knew, however, that relief would come and it did. Soon after the break Sankar got his man and Murad easily held a catch at deepish point (2-146). Three more fell for the addition of 30-odd runs. Sankar followed up with an LBW (3-158). The return of G&A restored some sanity. Limo pulled off a stunner, making ground and sliding under a skier to take and hold the catch on his chest to give the Gaurav another wicket (4-165). His opening partner Adit found another ripping late swing to remove the remaining opener, giving CT another classic edge.
Now with Tigers sat on their tails at 5-178 we looked like we were back in the game. Lurking, however, was the Tigers No. 7 whose rapid fire 47 combined with a mounting wide column pushed the score to 6-228. A high, high catch to the safe hands of Sankar removed him off a cramping Gaurav. Adit hit back also and Murad took a great catch at deep point, running in and forward, taking a looping catch at ankle height (7-231). Gaurav, in obvious discomfort, rallied one more time to uproot the stumps (8-243).

If our in-form bats could get in soon we would have a chance at this, but Tigers do have impressive tails and this one wagged. A comeback spell by KB and an over from Limo are best buried in a lonely grave, and Anton took some stick before he got his revenge as only he can… Somewhat flayed, Anton made at least one point by squaring up the ambitiously cocky Pai, who three times failed to switch-hit for four, nailing him LBW (9-278). Such disrespect deserves remembering. Sankar made the end quick with a edge flying to Gaurav at slip who took it above his head (10-278).

Not our best team effort with the ball but all of Gaurav, Adit and Sankar bowled well for 3 wickets apiece, and Kavin deserved better. We actually fielded quite well, with some great catches taken. It was now a great challenge to our top order who have been in fine form.

We would have to produce our very, very best effort to get over the line, but the ground was the same size and the field rock hard so with application and aggression and a dollop of luck we could get there.
Murad and Sumon took up the challenge and we needed another big partnership from them but it was not to be with Sumon the first out. However, Sankar and Murad took it up to the Tigers. Sankar crashed 3 boundaries through point area and Murad joined the party with 4 of his own particularly through square. Sadly both departed on 57. At 3-57 in the 10th over we had to re-set with Kavin and Limo both yet to face a ball. Limo decide to smash his first to the Bank End for 4. One more 4 was added before he, too, was back in the shed (4-92). Adit and Gaurav were on their way fairly quickly (6-110). Mairaj entered the fray and slammed a ripper through cow corner and stuck around for a while (7-126).
One name I have not mentioned much yet is Kavin. While the mayhem above was acting out at one end he was looking simply sublime at the other. This from the ‘live’ coverage:

And so he was. Kav not only played with the maturity we saw growing in his previous 2nds knock, he stamped himself on the game. He left when he needed to. Seemed to have endless time to deal with the good balls. He stayed there for almost two hours and 25 overs! All highlights in themselves, but the biggest highlight was his strokeplay. He scored 40 of his 62 in fours. And these were not opportunistic, neo-agrarian hoicks. All copybook cricket shots (well, except for one but we will get to that). He owned the area either side of square. He laced a couple pulls, but his leg glancing square was glorious – one was perfect. He barely moved and it was in the greenery before the bowler had finished his follow through. Add to that drives and tickles for one of the most satisfyingly graceful innings I have seen in Shark colours. 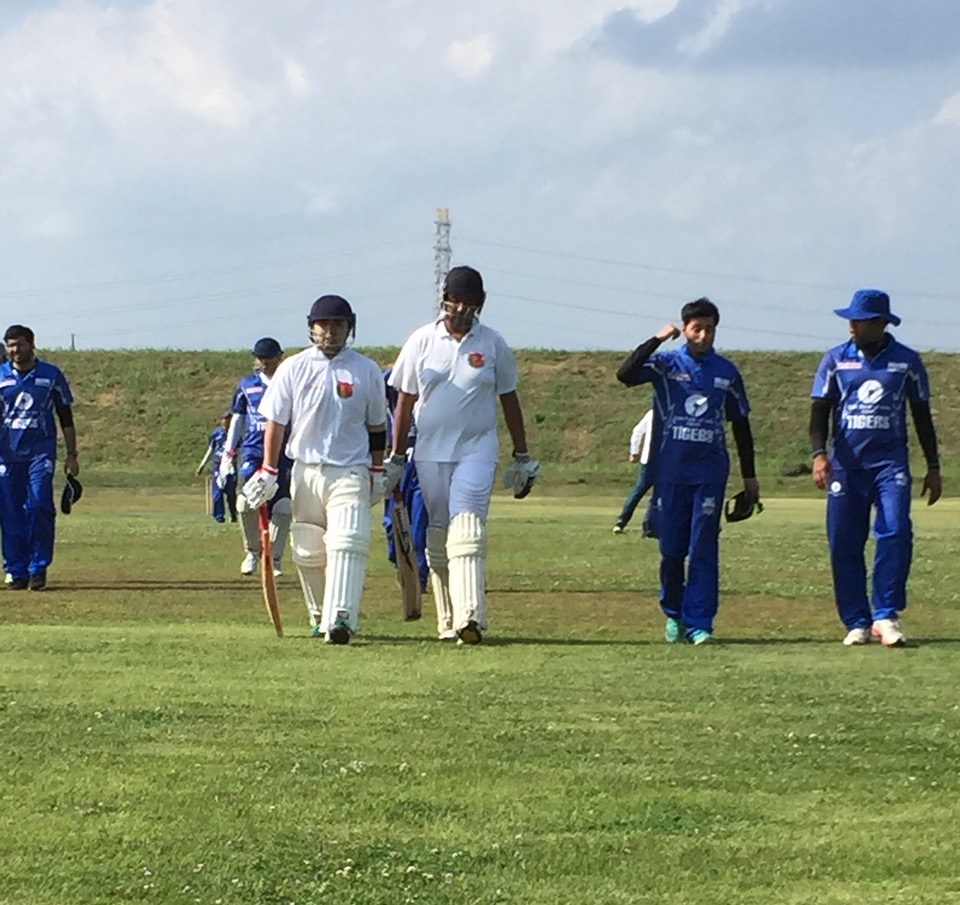 Meanwhile, back at the other end… With Anton (8-132) succumbing in the 24th over and the climb to the target too high, the next two targets were more symbolic. One, to avoid giving the Tigers a bonus point which meant making it past the 32nd over. And, two, getting Kavin to a well-deserved fifty. These jobs fell on the broad shoulders of CT and the EFC-sticker emblazoned bat of KB.

CT had had a lean time with the bat of late, but I suggest that having one of his former My-Ys down at the other end and approaching a milestone, the Cap was determined to see him there. Kav continued on his way and CT supported for the six overs needed to avoid the bonus point. They split a 20-odd partnership, but just in sight CT tickled one behind (9-155). KB saw off the four balls required to avoid further embarrassment and turned to the next task.
History will show that the last wicket put on 35 in basically 4 overs of which KB got 1. Still a good slab of runs short, Kav did not bat an eyelid – he just batted. Some scampered runs, a couple more boundaries square and a bit of a luck one past the ‘keeper got him into the mid 40s. A no-ball was sent to the foliage to leave him on 49 with a free hit! But the Sharks dared not say anything (and I was not counting!). The bowler bounded in… and bounced him. Screw tradition! Kav simply lowered his stance, arranged his bat ‘appropriately’ and sent the ball flying over slips to the deep fine rope with a paddle-flip any IPL batsman would be happy with.
Not finished there! Past that milestone and urged to the next target of 200, Kav helped himself to a couple more boundaries until finally he offered a false stroke. All out 190.

So, we got spanked but we had some great highlights from some bowlers, excellent catching and a breakout innings to show his potential from a young man who came up through the local ranks. Can’t be too unhappy about that.