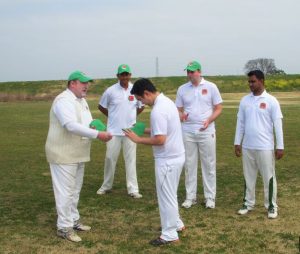 The Sharks 2nd XI kicked off their 2016 season with a match against Wyverns 2nd XI at Sano 1 on Sunday, April 3rd. Captained once again by Chris Thurgate, the Sharks team also consisted of newly appointed manager Anton, accompanied by OBs, Sankar, Molloy, Takady, Pavethy, Kavin, Tomizawa and Dr. Sayeed, as well as new recruits Dave Limin and Rubal. KB helped out as scorer and 12th man.

Captain Thurgate won the toss and elected to bat amid fine, warm weather following some early morning cloud and light drizzle. Opening for the Sharks were Pavethy and Sankar. Pavethy wasted no time getting his eye in, pulling a gentle half-tracker for six, first ball! At the other end, Sankar was slightly more circumspect, content to play block or leave and wait for the loose ball.

After a rollicking start, Pavethy was dismissed in the fifth over for a run-a-ball 20, well caught by Kobayashi diving forward at mid-off. Sayeed then joined Sankar, and looked to play aggressively, but struggled a little for timing. After managing a solitary boundary, Sayeed was caught by Okoshi off the bowling of Kudo.

Debutant Rubal caught the eye with a distinctive technique involving the smallest of back-lifts, and often looked to move to off stump and work the ball onto the leg side. While he gradually worked his way into his innings, Sankar had by now gotten his eye in and started to capitalize on anything full, with a couple of sweetly timed cover drives for four. Eventually, though, he was caught off a leading edge for a solid 24.

Coming together at 60 for 3 in the 12th over, Takady and Rubal shared in an excellent partnership of 71. Takady scored fluently from the outset, hitting several boundaries with whips through midwicket off Wyverns’ spin twins Goka and Yotsui. Rubal, too, gained fluency and prospered increasingly with pulls and laps to the leg side. The two ran well between the wickets and extras began to mount as the Wyverns bowlers started to lose their lines after a generally disciplined start. Uehara’s entrance in the 24th over ended the partnership, with his loopy offerings proving too tempting for Takady, who was comfortably caught at long on attempting to clear the fence. 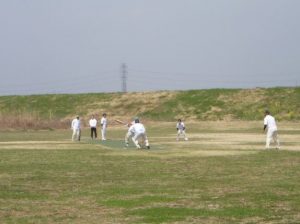 ebuting at no. 6, Dave Limin showed plenty of positive intent with the bat, and looked especially keen to pounce on anything short with pull shots. He and Rubal shared in a 30-run stand, maintaining a healthy run rate of 5.5 an over. The two were dismissed in successive overs, again to catches in the outfield, leaving the Sharks at 168 for 6 with just over 11 overs remaining.

Molloy kept out a threatening yorker but was then bowled next ball, playing around a straight one on middle off the bowling of Kudo. Kavin looked composed and struck a couple of boundaries in his 11, including a sweetly timed aerial clip to long-on, before upholding a family tradition of stumpings against off-spin. Tomizawa stuck his third ball confidently for six, and looked to have repeated himself again next ball, but was unlucky to be well caught on the boundary at long-off by Kobayashi.

Anton and Chris Thurgate combined for a vital 30-run 10th wicket partnership. Anton kept picking out the fielder until eventually clearing the infield for a boundary through long-on. Thurgate unleashed a monstrous hoick down the ground for six. The running was, umm… distinctive, with the highlight being an almost-four turned two turned dot (incl. mid-pitch conference). By the time Thurgate finally holed out at long-on for 15 in the 40th over, the Sharks had lifted themselves to a somewhat imposing 220 all out.

In the field, the Sharks opened up with our latest Uenomiya recruit, Tomizawa. Coming in off a long run, he generated brisk pace and had the Wyverns batsmen looking edgy, but initially struggled a little for line, with the ball moving both ways in the air. At the other end, Sankar also extracted prodigious in-swing and struck in his first over, clean-bowling Masubuchi.

First-change bowler Takady proved difficult to hit as always, cramping the batsmen for room with his mix of pace and sharp off spin. Wyverns nonetheless managed a solid 25-run partnership for the 2nd wicket and were travelling at a healthy run rate of around 5 an over, but then lost two wickets in quick succession, the first a comfortable catch to Dr. Sayeed at mid-on off Takady, and the second a smart stumping by Thurgate as the ball spun past the left-handed Goka.

Dave Limin replaced Sankar for some more right-arm medium. After learning the perils of dropping short on the Sano 1 pitch, he quickly reverted to a near-yorker length and was immediately treated with respect by the batsmen. Next up for the Sharks were spin twins Chris “Warnie” Molloy and Anton “May” Lloyd-Williams. Molloy was launched for six over long-off second ball by a swashbuckling Uehara, but managed to create a couple of chances thereafter. Unfortunately, dropped catches were beginning to prove costly for the Sharks, with both difficult and regulation chances being spilled.

Dave Limin broke the trend by holding onto a sharp head-high catch at first slip, as Molloy’s leg spin took the outside edge of a Kobayashi drive. A few overs later, Anton claimed an even bigger scalp, uprooting the middle stump of danger-man Uehara. Known for his prodigious flight, on this occasion Anton deceived the batsman more with flight off the pitch as Uehara shuffled to the off side and looked to pull what seemed an innocuous half-tracker, but somehow missed and instead had to watch as his middle stump was sent cartwheeling. 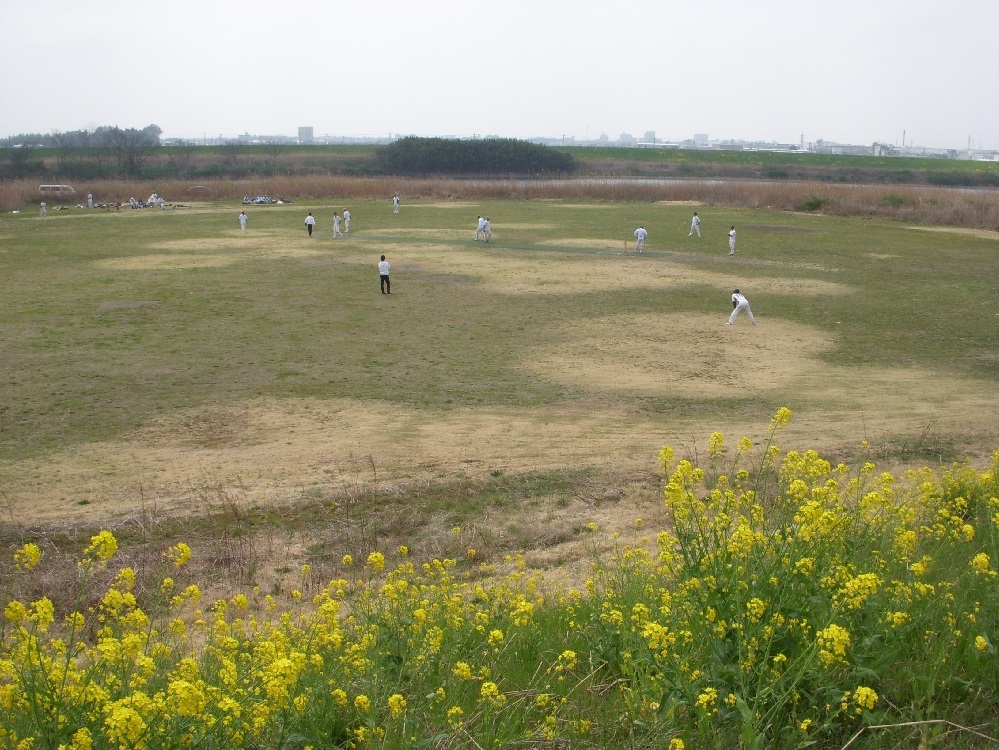 Kavin was next off the Sharks’ spin-bowling conveyor belt with his tidy right-arm offies, while Rubal sent down some rhythmical right-arm medium from the other end. Rubal struck in his first over, with Sayeed again holding on to a comfortable chance at third man. At 112 for 7 after 22 overs, Wyverns’ chances looked slim, but some continued drops in the outfield kept them in the game. The ground fielding left a little to be desired at times too, perhaps a sign of some rust following the winter off-season. Replacing Rubal for a couple of overs was Dr. Sayeed, A.K.A. The Fastest Spinner in Japan. His Afridi-like offerings proved difficult for the batsmen to catch up, and so to for Thurgate behind the stumps.

Credit must be given to Wyverns’ pair of Takahashi & Takahashi (K. and S.), who both started cautiously but accelerated nicely to keep the required run rate in check. After the final drinks break, they needed a further 69 off 10 overs with 3 wickets in hand. Tomizawa made an excellent return to the bowling crease at this key stage, all but bowling a maiden over until the final ball was edged through third man for four. He managed the feat in his next over, though, and with Takady also maintaining control from the other end, the pressure eventually told on the two Takahashis. Looking for a non-existent single and then compounding matters with a mid-pitch conference, S. Takahashi was run-out by Anton in the covers.

Another run-out came just three balls later, with Kavin doing the fielding work this time. With 9 wickets down, Wyverns sent in Hayashida, who had injured (possibly broken) his little finger while fielding, to bat one-handed in the hope of extracting some wides. He had the unenviable task of doing so against an in-rhythm Tomizawa, with fielders stationed in close all around the bat. The ball eventually hit his bat and lobbed tamely to the awaiting Takady at silly point, and with that Wyverns were all out for 177 in the 36th over.

All in all, it was an enjoyable and fairly close match, with many Sharks players getting a chance to show their skills with both bat and ball. Dave Limin and Rubal both showed promise in their Sharks debuts. Catching is undoubtedly an area we will need to improve on through the season, but we can still draw a lot of confidence from the match outcome.

Thanks to Wyverns for a match played in fine spirit, to 12th man KB for his services, and to the FFE umpires who both had an excellent match.